The Nintendo Switch changed the way people played console games when it came out in 2017 and now Dell is looking to possibly do the same when it comes to PC gaming with the UFO concept hardware from their Alienware brand. The device comes with an eight inch screen with with detachable controllers, which use magnets instead of tracks like the Switch’s Joy-Cons. You can also detach them from the tablet portion and put them on their own base for a Joy-Con-esque experience using the controller base. Similarly though, you do get a cramped d-pad experience this way – but it does at least offer up a d-pad.

The removable controllers can’t be held sideways like Joy-Cons and the tablet itself has a large kickstand. The device can also be used on a TV and the idea behind this is essentially to offer a PC-level Switch. The UFO uses 10th gen Intel processors – although the processor itself wasn’t named. For the highest-end experience, they should hopefully use either an i7 or i9 to make it somewhat futureproof. The screen’s revolution of 1900×1200 is a tremendous leap forward from the Switch 720p setup and should enable higher-fidelity games to look even better. Beyond controllers, you can still use a keyboard and mouse – so playback at home is even more ideal. The Concept UFO is just that – a concept and may not see a formal release. Given how much more accessible this kind of device can make PC gaming, hopefully it does wind up coming out. 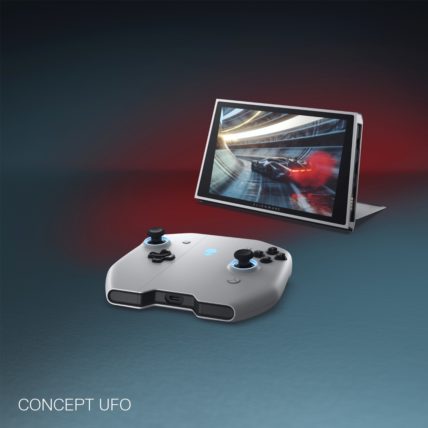 Pricing will be a tough nut to crack, because including an i7 in that form factor won’t be cheap. Battery life is also an issue too as a higher-quality battery would provide a better experience, but up the price. Portable devices aimed at PC gaming have been released to minimal success, like the GPDWin, but those were also niche devices without massive company backing like Dell. As a result, the company could release it at a loss to try and build up steam for it. Legally speaking, this is incredibly similar to the Switch and that could be something they have to adjust – but the concept of having a Switch but for PC gaming is an appealing once. With lower-end games, it’s so easy to go with a Switch version instead of PC because it is so much more versatile and the experience isn’t going to change much from device to device.

The controller itself looks good. The d-pad looks large, but not clunky. The analog sticks also appear to be inspired by the Xbox One’s form factor and that almost can’t fail – even cheap third-party controllers using that form factor work nicely and are comfortable. One great thing about these side controller pieces instead of the Joy-Cons is that they have some real heft to the sides and back – so they should be easy to hold for longer play sessions. The controller base itself looks interesting – it’s very much like the Joy-Con base with the Switch, only it has a slight V shape to it that should make it more comfortable to hold and control everything without your hand cramping up. The bumpers and triggers look solid – although they don’t have an indentation for fingers. Time will tell just how well things work out for the UFO, but the concept itself is strong and one that could be a great way to play PC games anywhere you are.