A long time ago in a cinema far, far away a movie was shown that was the beginning of possibly the most polarizing and popular science fiction franchises the world has ever know. 1977 was when the movie Star Wars (given the subtitle A New Hope in 1981) was released and raised the bar for special effects teams and film score composers everywhere. Since the conclusion of the original trilogy in 1983 many have sensed a great disturbance in the franchise, as unnecessary edits and additions to the original films paved the way for prequels, sequels and spin off that have not been met with a stellar reception. It’s a period of civil war among Star Wars fans in regards to the merits of what LucasFilms has produced over the last few decades, but one thing that even the most purist of Star Wars can agree on is that the 2003 game Star Wars: Knights of the Old Republic is one of the finest additions to the expanded Star Wars universe. Be warned there may be some Homer Simpson level spoilers beyond this paragraph.

Star Wars: Knights of the Old Republic takes place about 4000 years before the rise of the Galactic Empire. Jedi Knights are much more common than they were in the original film trilogy but it’s still a difficult time for them. Darth Malak, Dark Lord of the Sith, is wreaking havoc on the Republic with his armada of Sith. Many Jedi has been killed in the conflict while others have turned to the dark side in servitude of Malak.

After selecting a character class and gender, the player awakens aboard the Republic ship known as the Endar Spire. There are some significant gaps in the player’s memory but addressing the amnesia will have to wait since the Endar Spire is under attack by Sith Lord Darth Brandon, which is probably the least threatening Sith name ever. Thanks to the brave sacrifice of the soon forgotten Republic solider Trask Ulgo, the player is able to get away in an escape pod to the world of Taris where he meets pilot Carth Onasi, the twi’lek Mission Vao and Zaalbar the wookie, forming a group that bears some resemblance to the rag tag crew of the movies. 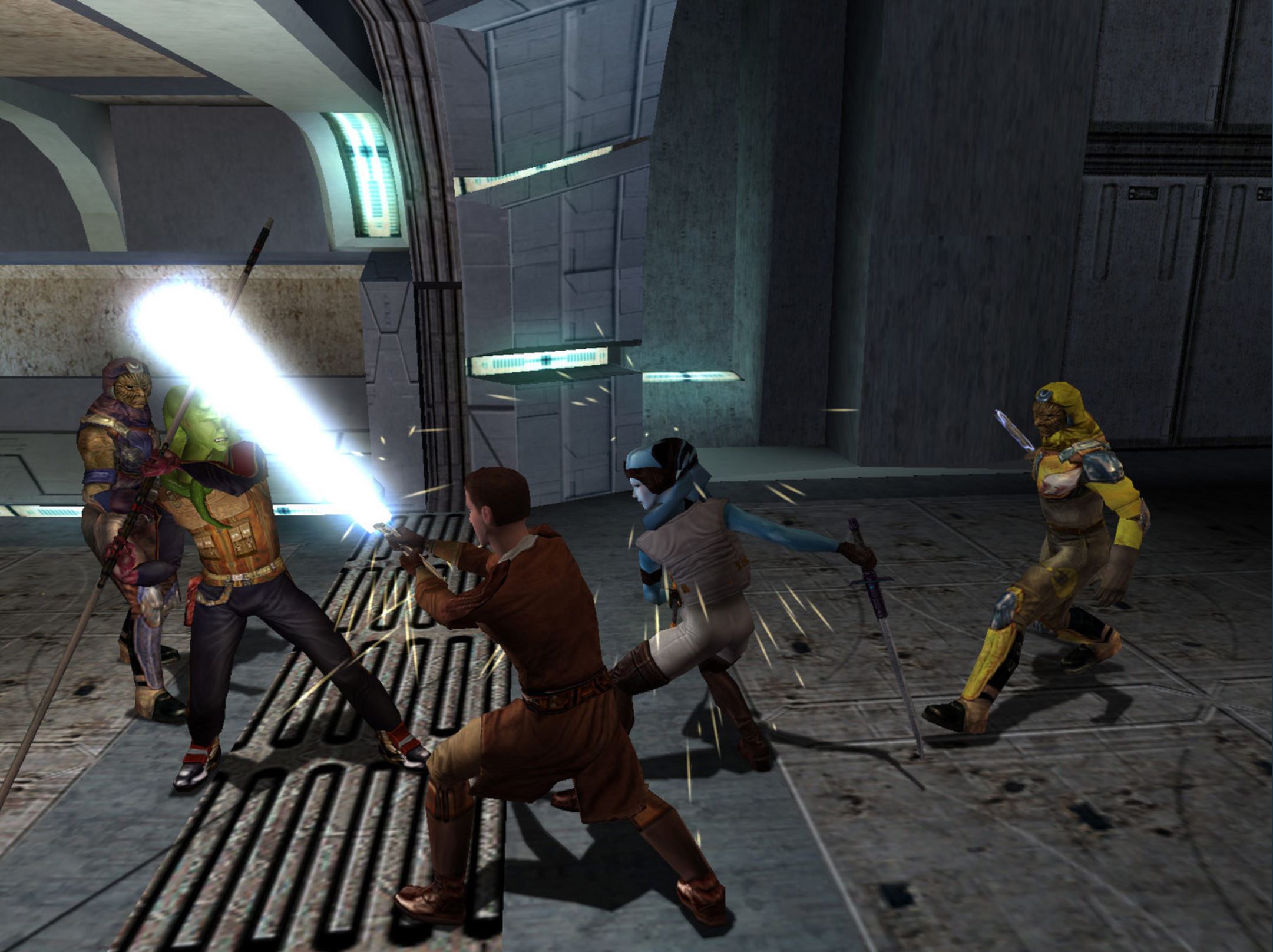 The diverse party members of Knights of the Old Republic is part of what made this such a great title. The different characters of the films is part of what made them so memorable and Bioware did a great job of recreating the team dynamic in this game, which is something they have had repeated success with in later games like Mass Effect, Dragon Age and Jade Empire. Even though they were all allied with the player in the fight against Darth Malak not all party members were pure devotees to the light side path. A few characters had some dark side leanings, which made things more interesting in certain scenarios and resulted in some different reactions to the player choices. One of the more memorable characters was the assassin droid HK-47. HK-47 was proof that machines can in fact be evil, including his disdain for humans by addressing them with such terms as meatbag. His dislike for organics made for some interesting dialogue and this led to him being a heavily used character during both my light side and dark side playthrough.

Star Wars lore has always involved a battle between the dark and light side of the Force and Knights of the Old Republic would have been an inauthentic experience without this dynamic. Bioware RPGs typically involve a lot of player choice and the player can decide whether to venture down the path of the Jedi or be seduced by the dark side and become a Sith. The choices a player makes will determine which side of the force they show allegiance to, which is a template that was followed in subsequent Bioware games. But there does come a point of no return where regardless of choices the player can decide to ultimately go Sith or Jedi. Choosing the latter keeps the team intact and the mission objective of defeating Darth Malak to bring peace to the galaxy is adhered to. Going with the former results in mortal combat with the other Jedi teammates, and after killing them the objective becomes usurping Darth Malak and taking over the mantle of Dark Lord. The fact that player could “succumb” to the dark side was one of the more memorable aspects of this title, as the struggle to resist the dark side’s temptation was alluded to in the film’s but we knew the hero would resist the allure. The player isn’t bound by such heroic ideals in Knights of the Old Republic. 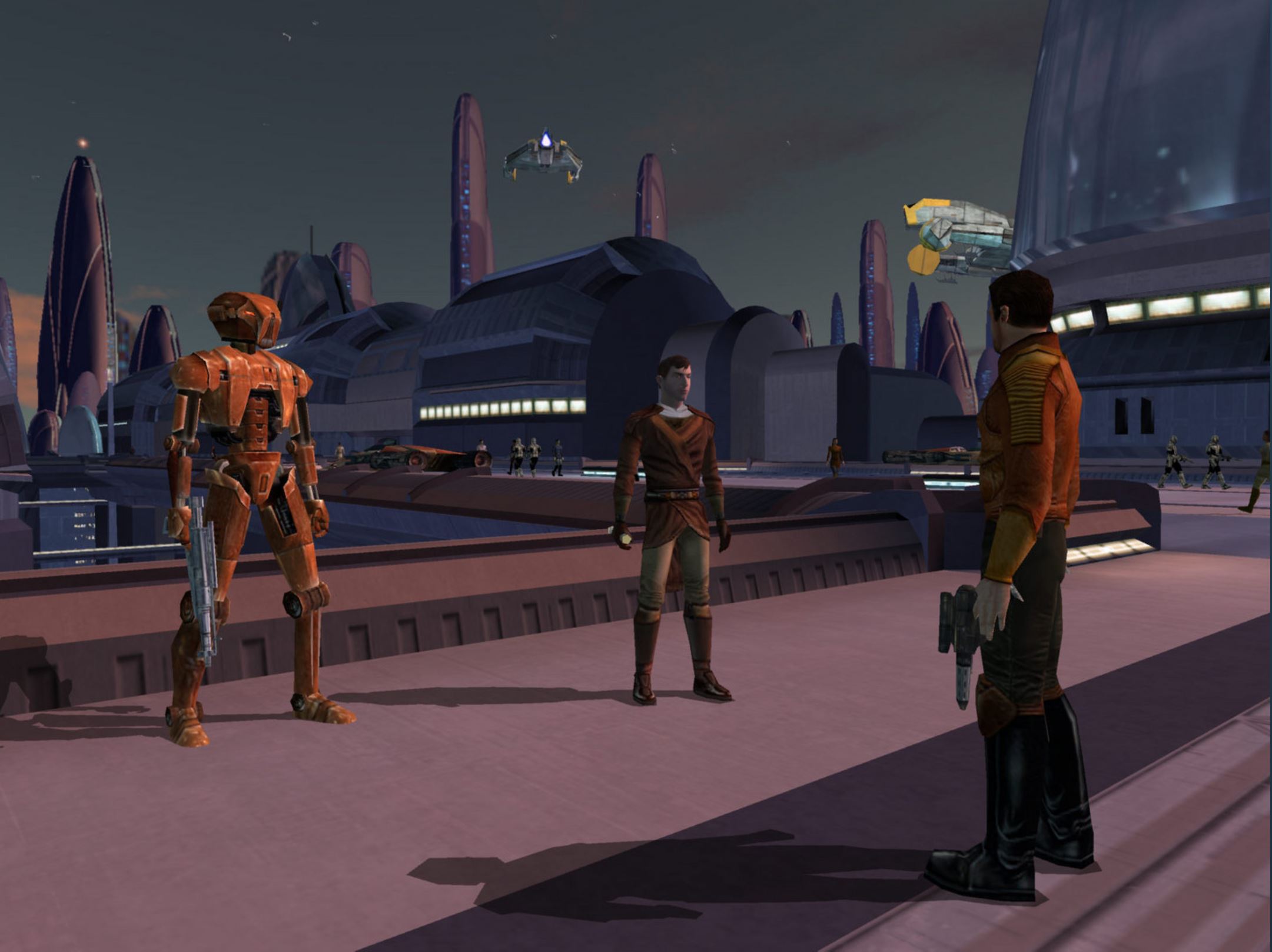 Plot twists and surprises are something Star Wars is known for (you were given spoiler warnings) and Knights of the Old Republic is no exception. At the beginning of the game we learn of two dangerous and powerful Sith lords: Darth Revan and his apprentice Darth Malak. Darth Malak is the immediate threat to the Republic, but where is Darth Revan in all of this? It turns out Revan was captured and his memory suppressed so that the Republic can use the powerful Sith lord in their fight against Malak. It turns out this whole time the player has been Revan, and through a sequence of flashbacks the game fed you a series of subtle clues that were easy to ignore and disregard at the time but watching all of them in hindsight it makes perfect sense. The plot twist was interesting in itself but the execution of the reveal was flawless, helping cement Knights of the Old Republic as not just a great Star Wars game but a reminder that despite some missteps in the franchise there’s some great storytelling in the Star Wars universe.

The choice-driven RPG gives the player a lot of freedom in designing their character and their Jedi class. Depending on the design they have access to unlocking different Force powers which can make combat more interesting and feel true to the source material. A way to exploit and the game and become overpowered is to not level up the character at all beyond second level until they become a Jedi. This approach can make the road to becoming a Jedi more perilous but the additional Jedi powers make it a worthwhile challenge. Conversations are filled with branching dialogue options to make multiple playthroughs different besides just the major Jedi or Sith decision and also adds a greater element of role playing to experience, giving the player a much more active role in impacting their world. 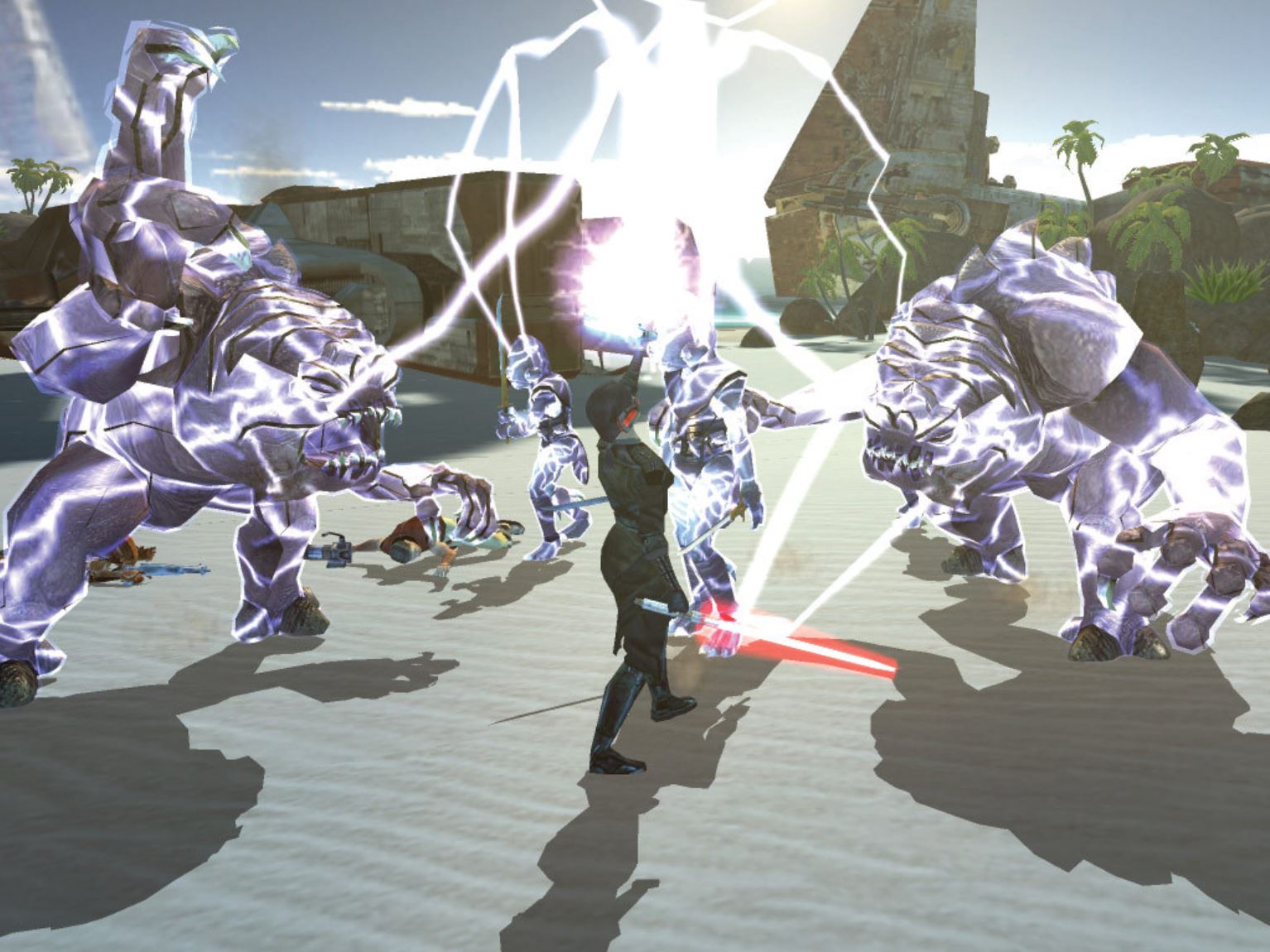 Star Wars: Knights of the Old Republic is arguably the best Star Wars game out there. It created a Star Wars experience that was worthy of being made into its own cinematic trilogy, delving deep into Star Wars, creating a diverse cast of memorable and interesting characters while exploring many different worlds in the Star Wars universe. The influence of the approach to storytelling and gameplay mechanics can be seen in subsequent Bioware games, which given the excellence of this title is not surprising that they would want to use this as a template for their own created worlds. When Mass Effect was released I jokingly referred to it as KOTOR without the Star Wars license, which is an oversimplification but also not entirely inaccurate. A sequel was made a couple years later in 2005 which was a fine game but wasn’t quite as good as the original and in 2011 Star Wars: The Old Republic revisited this era as an MMO. The influence of Knights of the Old Republic in later games cannot be denied and even seventeen years later this is title that is worth playing.