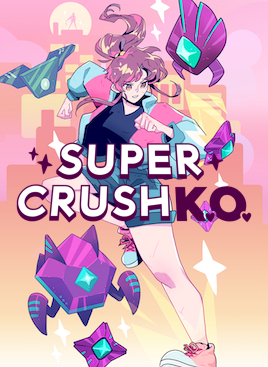 If Graceful Explosion Machine was a shooter that acted like a brawler, Super Crush KO is by contrast a brawler that doesn’t pretend to be anything else. That honesty — as much a clever meshing of retro beat ’em ups and run-and-gun sub-genres alike — turns out to be a helpful boon in what is a game that could so easily slipped into style over substance. Many of the same moreish hooks and intended visual choices make a return, yet that confiding in the familiar and of simply transitioning past success to another format shows that the game’s developer, Vertex Pop, have landed at a sound and modest design philosophy. And for the follow-up title for the Canadian-based studio — nearly three years on from their own supposed “launch window” title for the Nintendo Switch — Super Crush KO clearly aims for another corner, another perspective, in what is that nostalgic, high score-racking arcade flair that made their previous title so immediately appealing. The end product, even if the intention remains untouched, lands on a gameplay loop that is remarkably easy to get swallowed up in, even if the overall journey is a touch on the unfortunately brief side — the credits screen landing at around the three hour mark on first playthrough.

The execution, for the most part, continues on in much the same frenetic, intently-focused and enjoyable fashion that helped bolster Graceful Explosion Machine’s implied minimalism and suggestion it was a game all about high scores and nothing else. Super Crush KO has the high score targets and the end-of-level grades to hit, but for those who can recount Graceful‘s bright geometric stylings and collision of many a color (almost always at the same time), Super Crush KO‘s delivery is a touch more subdued this time round. The familiar palette and sugary-like slavering of pinks, purples and greens are present, but unlike Graceful, the game’s liberties with aesthetic and effects act almost secondary to the relevance of its gameplay. Little time is wasted in setting the frantic pace with which the side-scrolling stages will come to play out in — going from 0 – 100 in a matter of seconds — and as such, the game does a terrific job at giving players the tools and the means to use said tools in simply letting rip.

Perhaps the first compliment you can give Vertex Pop, even if the sentiment mirrors their previous title, is in their avoiding getting too self-indulgent with the visuals. Of, potentially, using the expressive nature of screen-wide energy blasts and semi-abstract drawings to mask an otherwise flat-line, gameplay heart. It doesn’t take long to burrow into the major mechanics, however, to realize that the chosen aesthetic may in fact be a reflection, rather than a distraction, of Super‘s biggest plus. Super Crush KO centers around your player-character punching, kicking and essentially obliterating robotic foes into a flurry of bright, beat-em-up explosions both on the ground and in mid-air alike. Over the course of one’s progression across its four main worlds (though these “worlds” are, sadly, little more than palette swaps with only minute alterations to the environment and backdrops), while the aim of getting a high enough grade and score are still present, it’s the way enemies are set up — and gradually added to within each stage’s self-enclosed sections — where Super’s promise begins to take shape. 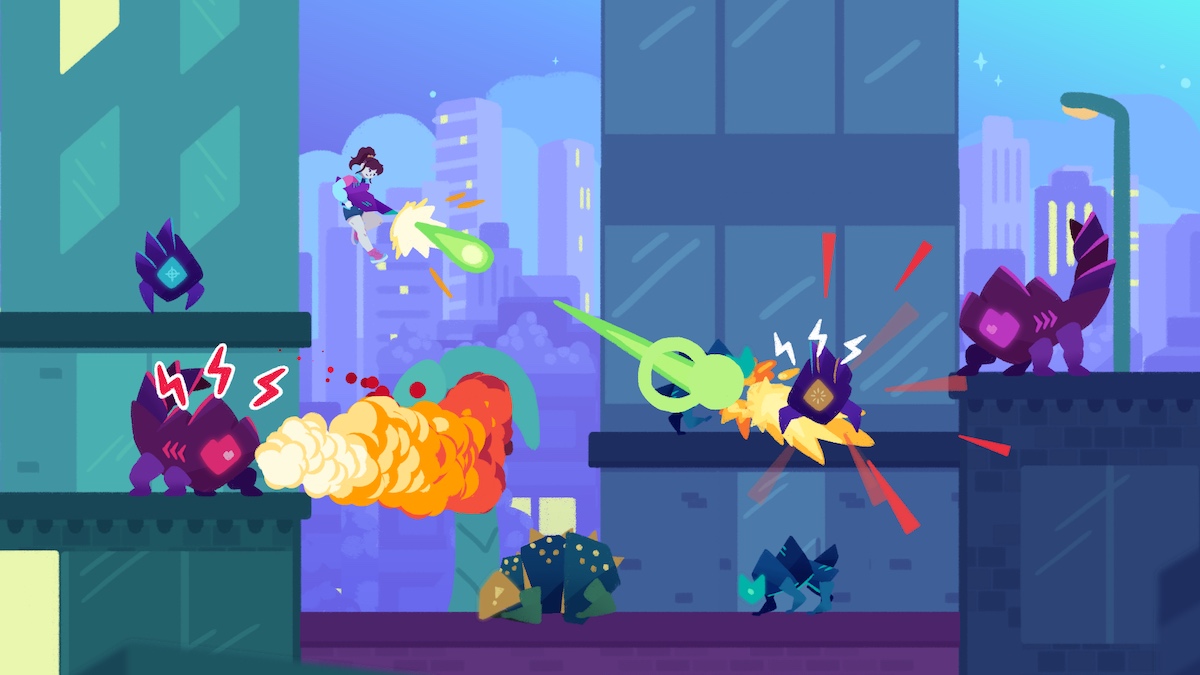 The manner at which enemies spawn does give an air of pure randomness and of lacking purpose on first sight (an argument, already emerging, of some hollow semblance of replayability possibly), but on closer inspection, Super Crush KO in fact encourages you to find a route around the madness. Granted, the combat itself isn’t necessarily complex — with a standard four-hit attack added to along the way with secondary moves that require a slither of your power meter to enact — and again there’s a fear that the brisk and blissful over-use of bright colors actually undermines the presentation. But there’s just enough variety and potential for emergent flashes of good fortune in its set-pieces for the mechanics — that take little time to get used to, which is a plus — to become a joy to work out. Even if the game does run along a wavering, inconsistent streak of difficulty and identifying how and when to best challenge its players. There will be spikes to avoid, lasers to phase through and walls to destroy so as not to disrupt your combo, but these obstructions (not for the first time) are elements in Super Crush KO that feel surprisingly underused, almost dismissive.

Even so, despite the brief inconsistencies, it’s surprising how well the game flows after a couple of stages whereupon Super‘s true intentions begin to take shape. Namely having you treat levels less like meticulously-crafted scenes and more like gym apparatus to slide, bounce and slam down on without a second’s notice. Regardless of whether these arenas of sorts come with perilous elements to keep a tab on or not. But even that winds up with a net win for Super; not for a second does the game allow you to lose sight of everything taking place on-screen. Projectiles from off in the corner that may put an end to your targeting that coveted S grade here, or enemies readying an attack that is so clearly color-coded for ease of visibility there. 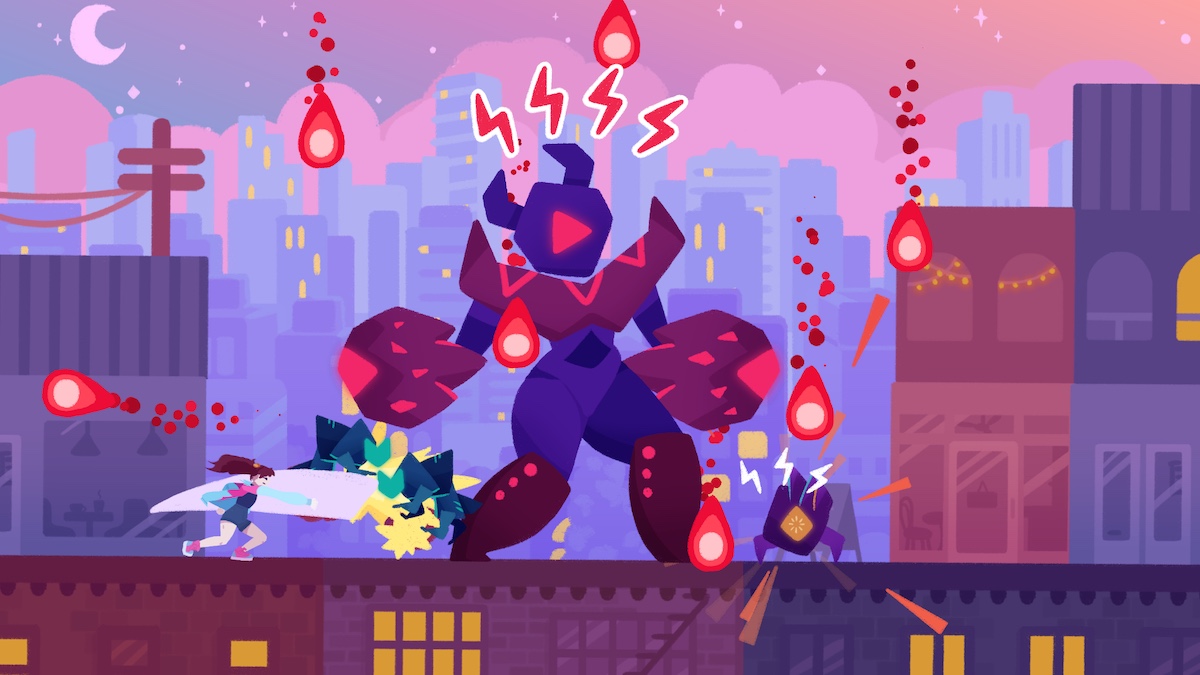 The key thing then — something that stops the game from feeling like a slog or at the very least like it’s lacking scenarios to adapt to — is knowing what moves and abilities to use that better serve the situation at hand. When and when not to use your accompanying energy weapon — even if it means simply keeping a combo going — that doesn’t take long to lose its rapid fire-rate. When to use a sliding kick on a row of enemies, when to launch into a three-chain strike mid-air, that in actuality may leave you at a slight disadvantage given it depletes your power bar, requiring you to fill it back up again. When to bait enemies into attacking so you can strike them all at once and have yourself nail a 20, maybe even 30-hit combo. Again the outcome is little more than a score and a grade (maybe even a few bonus points on top) and it’s a shame that the matter of health doesn’t really become an issue up until the latter parts of the third world.

But that’s not to say the gameplay doesn’t warrant that additional level of short-term, tactical thinking in order to get the numbers — and indeed the letters — as high as they can possibly be. The rapid pace of proceedings, not to mention how Super coaxes you into approaching things with a faster, more twitchier awareness of what’s going on around you, actually works in the game’s favor. Even if it does mean that stages last little more than a few minutes and whose level design, if you can call it that, falls by the wayside. Sadly blurring together into little more than an unremarkable sequence of floating platforms whose genre name-sake is so woefully under-utilized, you can’t help but wonder what the prospect of some more twitch-heavy sprints across an empty abyss would look like.

It’s an unfortunate double-edged sword the game perhaps unknowingly creates for itself — and one that carries through to the major boss battles which, ironically, are the weakest prospect of the entire showing — but the consolation is that Super Crush KO is still easy to get into. Tempting to flock back to on top, despite the frequent frustrations and not-so-comforting hindsight that a previous folly could have easily been avoided. One does have to question the decision to rank players at particular moments based on the grade they end on as opposed to averaging out their performance overall. An odd choice on Vertex’s part and it only goes to make those last-second hits from an off-screen projectile or the like that bit more annoying. 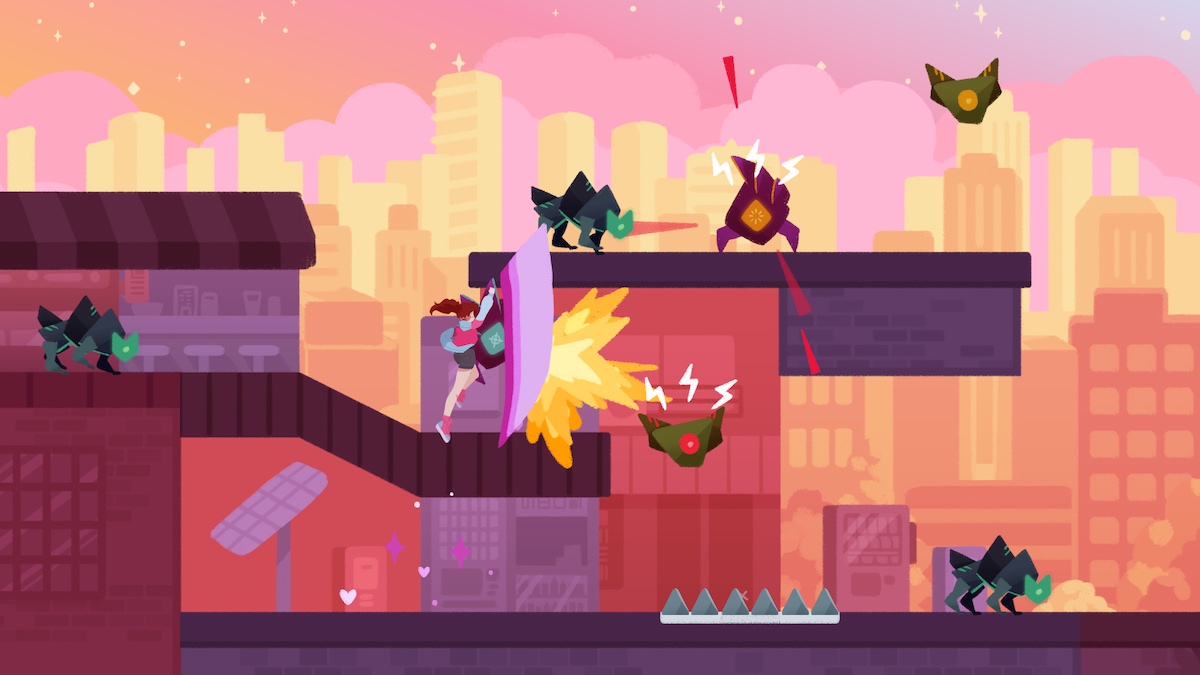 Fans of Vertex Pop’s previous efforts will be serviced best with Super Crush KO, and while the execution could have excelled a bit further in regards to level design and pushing players more, that’s not to say that the end product falls completely short. Aided by an addictive and easy-to-grasp gameplay loop that barely loses any of its pull or momentum alike, Vertex Pop once more demonstrate an understanding for that arcade-savvy thirst for high scores and the white-hot tension that comes with trying one’s best to avoid all manner of threat to such a score. That simple pleasure — and the pace at which the game encourages its players to press on — does just enough for the brief run-time to satisfy in the short-run, if not stand out in the long-run. There are many elements it copies, carries over and at times doesn’t quite capitalize on — despite the brief flashes of promise and suggestion of something more lying in wait — but Super Crush KO is a sufficient follow-up to Graceful Explosion Machine and a pleasant-enough challenge for those looking for 2020’s first, quick colorful and chaotic fix.