To be extremely honest, Streets of Rage was obviously conceived to be Sega’s make good for not having Capcom’s Final Fight. An arcade powerhouse, having the title as an SNES exclusive put a major dent in Sega’s already difficult fight for market share. Sure, time eventually proved that Sega’s Genesis had the chops to compete, but it was a battle that required that no advantage be given to the enemy. The wonder of it is that the title and its sequels (arguments about the merits of 3 notwithstanding) ended up being some of the best beat em up titles of the era. It’s strange, then, that it took so long for a fresh title in the series to crop up, despite the false starts that were renamed and attempts that were aborted. This time, though, it looks like fans are going to get the real deal. Streets of Rage 4 is a loving throwback to the old school style with some fresh ideas that improve on the formula without changing it.

People who know their punching games have a good idea what to expect here. Select a character at the start, each offering different stats as far as speed and strength, then work through a side-scrolling level stomping seven shades of various bodily fluids from the almost never-ending stream of adversaries. Being that I prefer the zippier characters, I went with Blaze, the classic red-clad femme fatale, if that term meant making a habit of kicking someone until they’ve forgotten the third grade. Her trademark kicks, punches and backflipping attacks are all present and accounted for, with each strike feeling like there is some weight behind them. 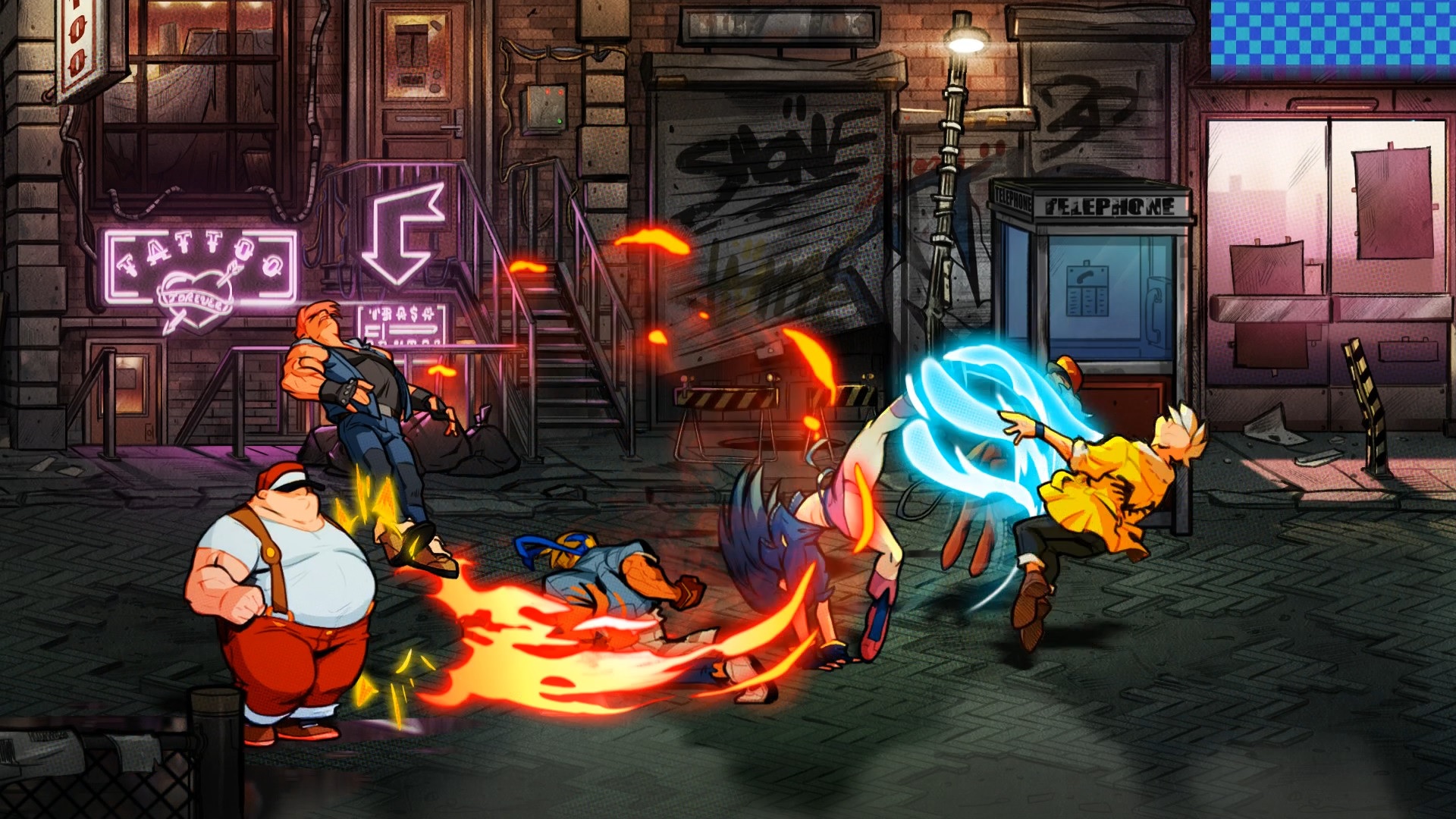 That isn’t to say that there haven’t been tweaks to the systems, with a couple of immediately noticeable changes. All of the previous series entries had “desperation attacks” in addition to the screen clearing star attacks. The desperation attacks gave the player a little extra oomph to deal with a nasty situation, but it came at the cost of a portion of the life bar. In practice, this meant that most players opted not to use the feature, unless they trigger it by accident. Streets of Rage 4 still takes a bit of health, but leaves the chunk as a green bar on the indicator. So, like Bloodborne, if the player manages to follow up the attack with successive hits, the health can be recuperated. It seems strange that it took this long to fix the system so it can become a viable choice, but it’s a great idea.

Something else that is much appreciated is the increased usefulness of jump kicks. This basic move has been helpful in the past to make some space and try to reposition the ruffians into a more favorable grouping for the players. That can still be done here, but it’s now possible to treat the hit as a pop up attack, leading into a juggle. Such a basic change improves the pace of the game, making the fights more fast paced and exciting. Previously, closing the distance could be a hassle. Now, if the player isn’t in the middle of attacking, they are either not paying attention or smartly moving out of the way. 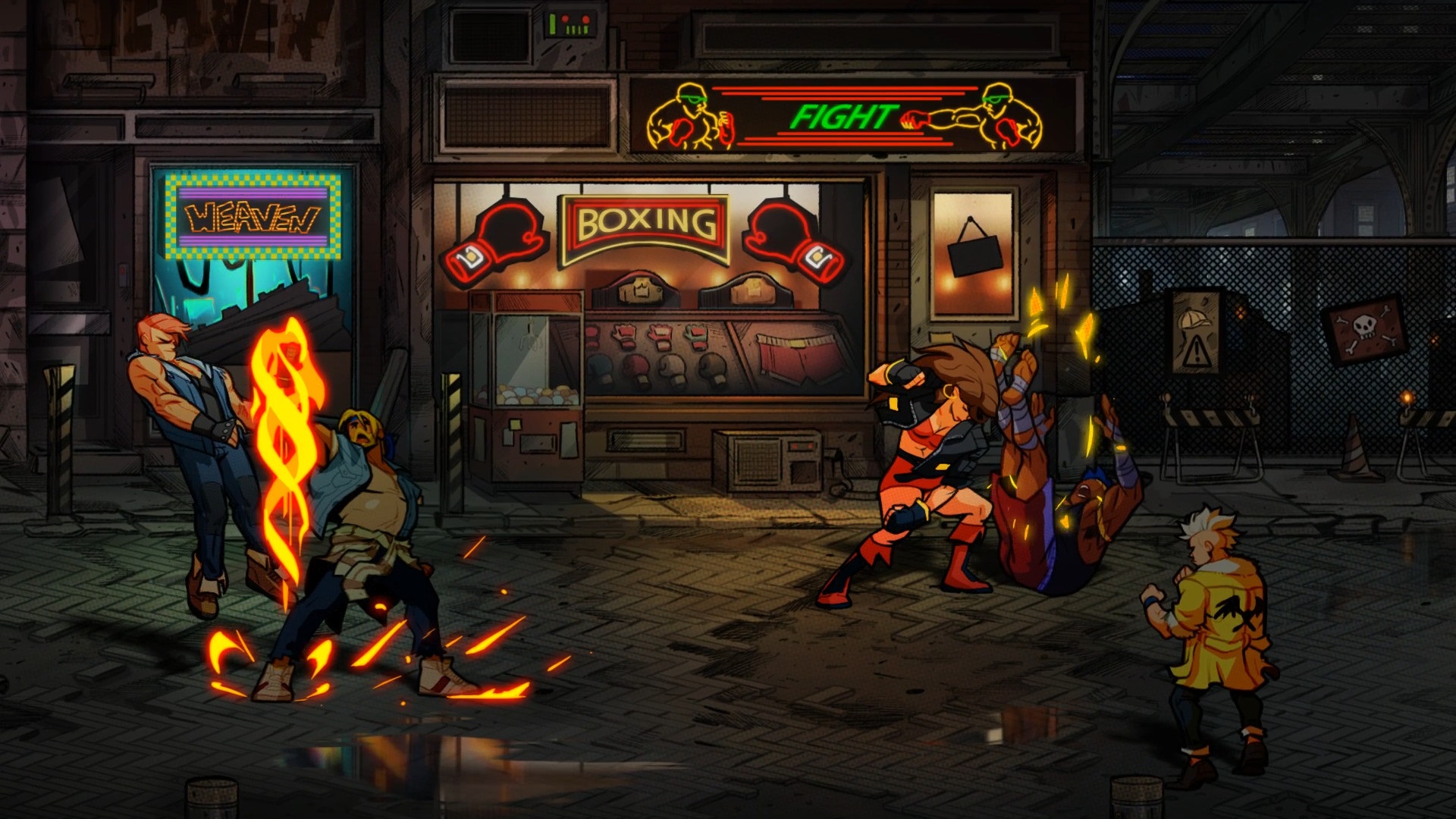 Lastly, though only one level was able to be played, the animation and character design is exactly what one would hope it would be. While pixel art is an appreciated style, Lizardcube has taken steps to give Streets of Rage 4 a more modern look. It’s cartoony and modernized, without being over-animated in a way that ruins timing. The returning characters are easily recognizable, but the artists put their own touches on it. It’s both a loving tribute and a well-realized throwback to the good ol’ days.

There were some groans and concerns when Streets of Rage 4 was announced. How would it stack up? Does the gaming landscape need another beat ’em up when there are still classics being rediscovered? Would a new title have the depth to make the entire endeavor worthwhile? Based on the show demo, it looks like it’ll hold up to the best of the genre, and it’s nice to have a fresh one of these with so much effort invested. As far as the depth that is expected in modern games, it felt like I was discovering new ways to dish out the violence throughout the whole thing. I wouldn’t be surprised if I barely scratched the surface of just the one character. The trio of studios, Dotemu, Lizardcube and Guard Crush Games have the makings of a quality entry when it releases later this year for PC, Xbox One, PlayStation 4 and Switch