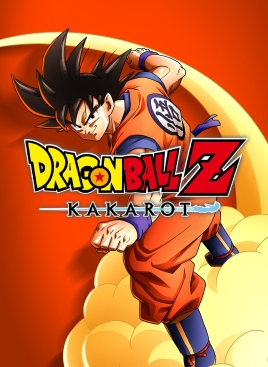 It’s been over thirty years since the Dragon Ball franchise was first published for the world to enjoy. In that time, it’s become a world-wide phenomenon spanning twenty movies and hundreds of episodes. There’s so much Dragon Ball Z merch in the world to consume it can be overwhelming. I would know, just ask the dozens of DBZ statues adorning my shelves. I’ve been a fan of the franchise for as long as I can remember. I was always ready for new episodes when they aired Friday nights and I always picked up the latest game. I have played most Dragon Ball games — and yes, so many of them are bad. Yet despite that, the handful of good games we’ve gotten are worth it. But it has been awhile since we had a full-blown DBZ RPG with interactive elements. FighterZ is an amazing homage to the franchise as a whole, with incredible attention to detail in mechanics and style. The Xenoverse titles gave players more of an RPG experience with new story and alternate universe retellings. This is what Dragon Ball Z: Kakarot was looking to provide. Bandai Namco’s tagline for the game was “play the show.” Where other games didn’t allow us to become immersed into the lives of Goku and friends, Kakarot promised hardcore fans depth and lore for a true role-playing experience. It’s a promise that frankly needed to be addressed because of the fact that Dragon Ball Z is much more than fighting. It’s been about fifteen years, but Budokai 3 provided some of the best role-playing we had yet to see in a DBZ game (also any Legacy of Goku title). It was thoughtful in its writing and provided much to do in the game — like exploring secrets or side-stories. While it’s fun to see the explosive battles DBZ holds, it’s also a franchise that put a lot of emphasis on storytelling and character development. These were elements that had been lacking in many Dragon Ball Z games. Which is why when Kakarot released, there was an expectation from fans to make good on that promise of being able to experience the world of Dragon Ball outside of fighting. Let’s see if Kakarot lives up to those promises.

One thing about Kakarot is sure: it’s a feast for the eyes. The cutscenes for the title are some of the best ever seen in DBZ games — with more of a manga art style approach that fits well with key story moments. Sean Schemmel and Chris Sabat have made a return to the game to contribute their vocal talents. Their performances are excellent, as usual, despite a bland script keeping them from really selling their roles. As usual, the Dragon Ball Z story starts with Raditz’s appearance on Earth. While it’s a tale I’ve heard a million times, the way it was written feels rushed as the game is played through. Major moments are skipped over (Vegeta’s most famous line didn’t even make it into the script) in an attempt to just push players through the game and give newcomers a brief summary of plot points. Interacting with NPCs in the open area environment felt flat and meaningless. Old faces may be seen from the Dragonball saga, but many don’t offer interesting side-quests or additional story. No alternate universe options that maybe unlock new support characters. Even the extra training that can be done to attain new abilities contributes nothing to the story. These characters may have a single line and then give you items, but they don’t feel purposeful in the empty world of Kakarot. It’s a shame because what I was expecting from this game was the deep lore created by Akira Toriyama. Every location feels flat and one-note. The title doesn’t take the time to touch upon major side-stories (like Lord Slug, Turles or Garlic Jr.). Previous installments in the Dragon Ball franchise have provided better character engagement than that. 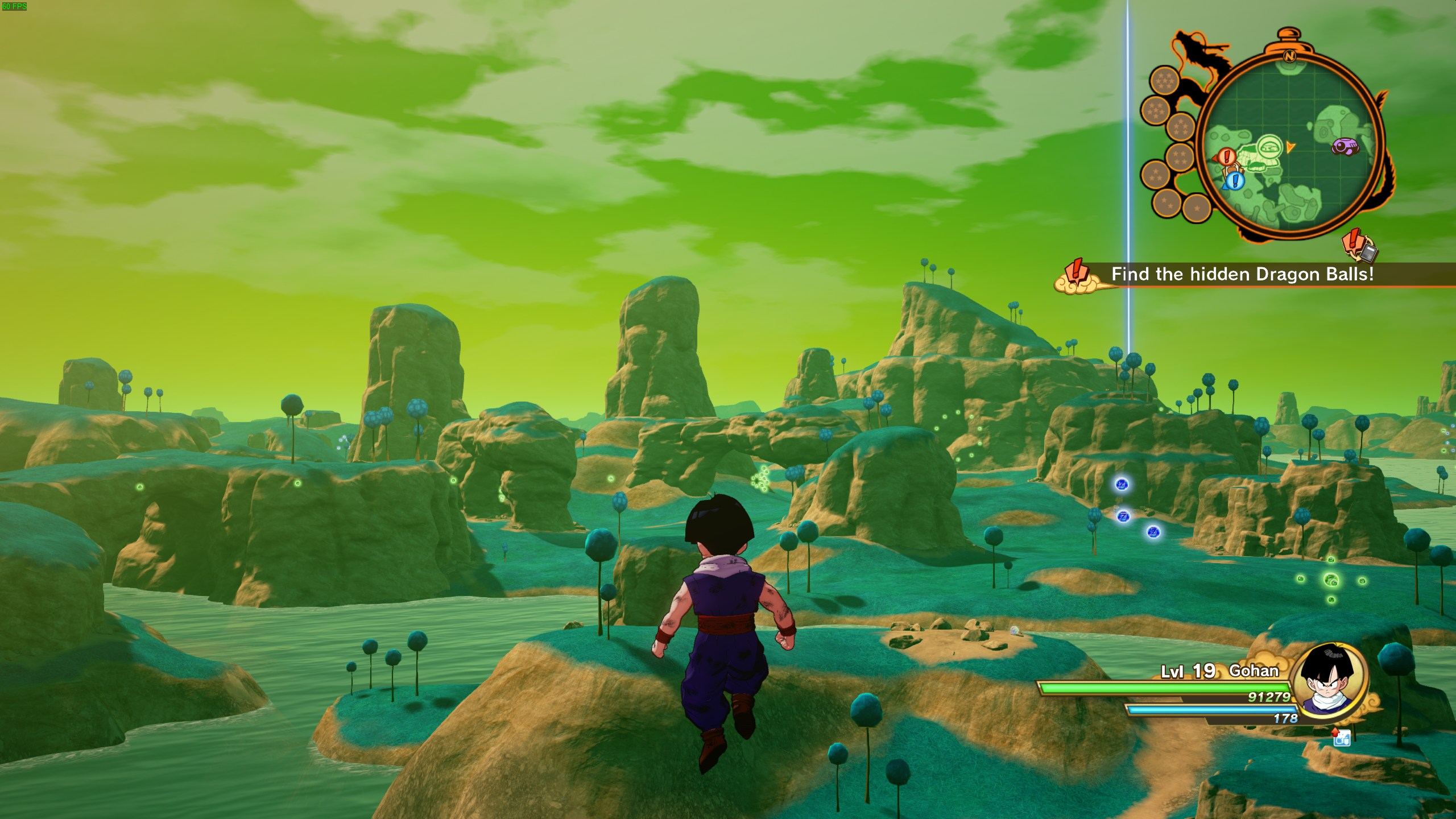 Other than side-quests from major characters, the world doesn’t have much to offer. Kakarot is played in an open environment where players can fly around as Goku and others, but doesn’t provide much in the way we were promised. It’s not fully open world, but areas with boundaries that make up the larger world. The visual artists deserve accolades for beautifully creating a fitting environment the development team should be proud of. It ultimately feels like a waste because of what little there is to actually do in the game outside of main story quests. The flying mechanics are straightforward, albeit clunky, and we even have options to change our vehicles — so we could fly on the nimbus if we preferred. Flying around is a form of traversal and a form of obtaining a necessary currency called “Z Orbs.” There are various colored orbs that are used to purchase enhancements in the characters’ skill trees, which need to be learned to grow stronger. But not only are Z Orbs needed, but also D-Medals so the ability to learn abilities can be purchased. Meaning that in order to learn a special skill, you must go to the training grounds and complete a fight to get Super Kamehameha. But if you don’t have enough Z-Medals, you can’t unlock the training. Oh, but there’s more.

There’s also various “Communities” where character emblems must be placed next to each other to maximize buffs from supporting characters. There’s seven different Community Boards where character emblems must be divvied up in order to receive stat boosts. It would have been cool for one or two, but seven different boards to boost relationships. Other titles have done relationships easier. Putting certain characters next to each other gives them better buffs — a mechanic trying to simulate the social relationships of Dragon Ball Z. Between orbs, medals and community emblems, Kakarot attempts to throw too many concepts together in the hopes of coming up with the immersive experience promised. Instead of sticking to the basics of the franchise, Kakarot doesn’t use these mechanics to bridge the gap between the show and the game; it becomes overly complicated for the sake of it. 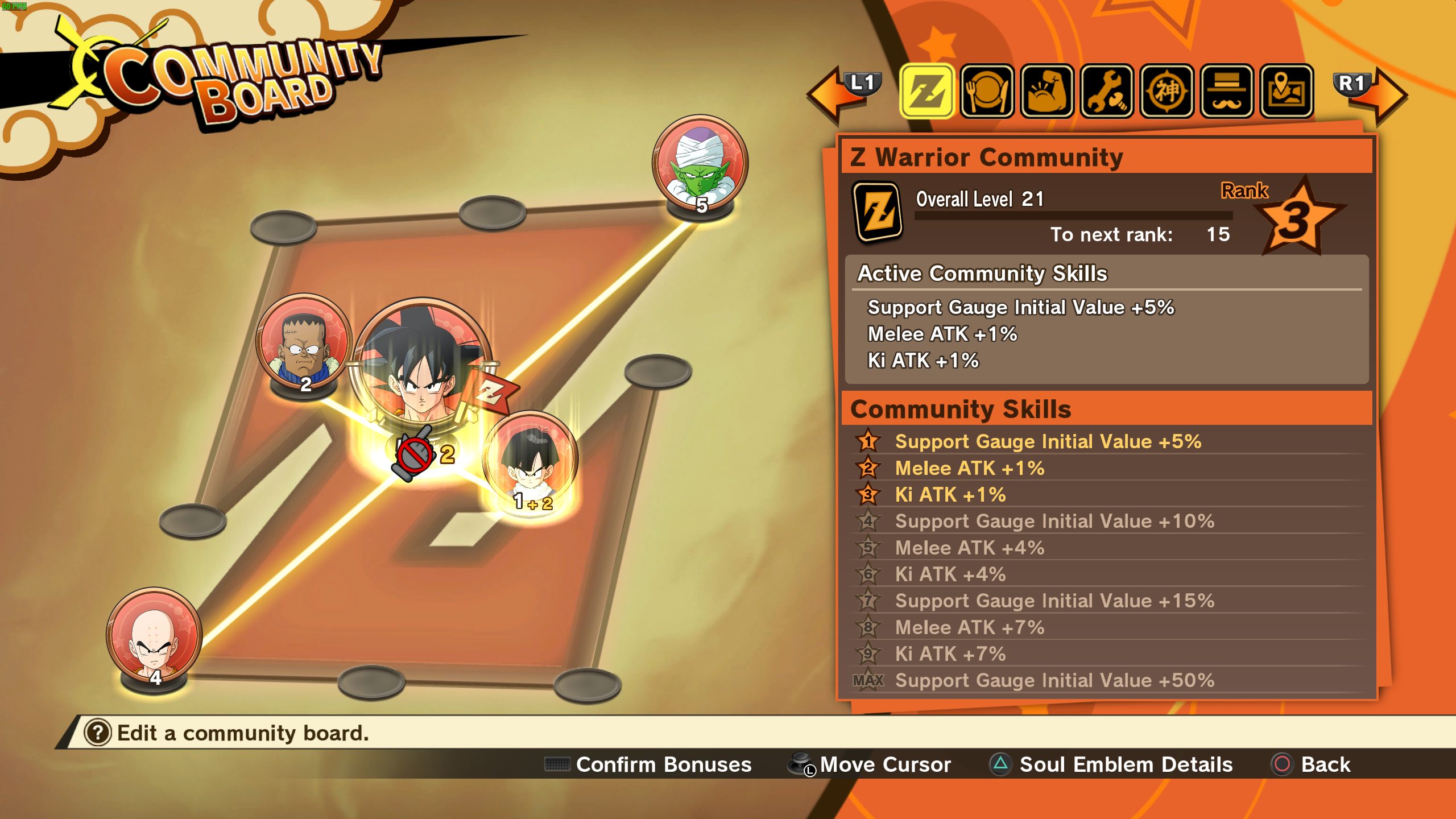 When not collecting orbs in the area, you can do the couple of side-quests made available to you at a time or fight the same random enemies flying around. It’s disappointing that there isn’t much else to do in the world. The side-quests are all basically fetch quests. Some do tie-in to Dragon Ball lore, but it’s mostly delivering items. When you do have to fight, combat mechanics are lackluster. There are spam attacks and limited combos that can’t be chained together. If you’re looking for a technical DBZ fighting experience, stick with FighterZ (or the older Budokais). This isn’t a title that pushes combat boundaries very much.

One interesting mechanic is being able to teleport-dodge whenever desired as long as the ki bar is full. It gave players a little more control over the fights. Support characters also added some flavor to fighting and provided useful assistance. But with no follow up rushing, chaining combos and the game using enemy animations to cancel my moves, Dragon Ball Z: Kakarot‘s fighting is sub-par at best. It’s another disappointment because there are so many fights in the source material that used advanced tactics, like teleporting moves, that could have been actualized if combat had been developed further. With a convoluted leveling system, barren environments and weak combat, the whole game just feels like a hastily thrown together homage to the franchise. 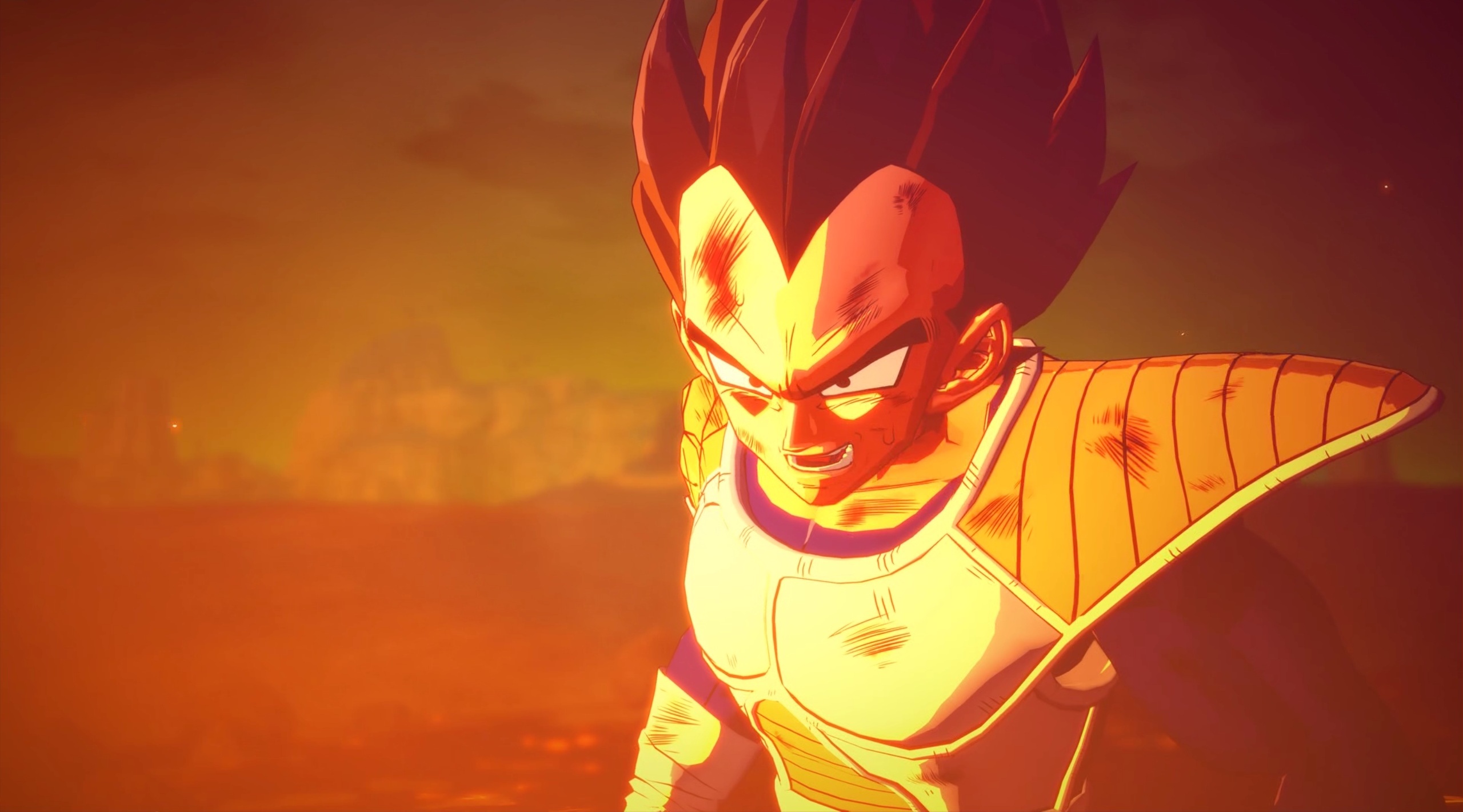 I wanted to like Dragon Ball Z: Kakarot more. I didn’t go into the game having super high expectations, but I also expected more than what it had to offer. Making a claim that we can “play the show” means more than complicated progression systems and an open environment. It also means more than hitting the basic plot points. Where the title truly shines in its cinematic qualities. It’s gorgeously animated and shows a lot of passion. The flip side of that coin is that gameplay feels passionless. It feels as if developers were trying to improve things that didn’t need improvement. All the mechanics for leveling don’t feel needed at all. The world is what deserved “complication,” not the mechanics. What made previous DBZ RPGs so successful was the focus on story-telling. The Legacy of Goku series is still one of the best franchise RPGs you can play because they kept mechanics straightforward and created an excellent environment for telling these stories. What I enjoyed was minimal compared to the game’s content, so it does not come with a high recommendation. But if you’re a hardcore DBZ fan like I am, you’ll still manage to find some entertainment in the game. Dragon Ball Z: Kakarot is not the best love letter written to fans, but it’s still a love letter nonetheless.