Infuriating though it might be to write about due to the clever use of spelling, Sukeban Games’ visual novel VA-11 Hall-A earned its dedicated following with humorous writing, an intriguing cyberpunk setting and stakes that feel personal while making a point about the world at large. The rundown world of Glitch City resonated and it was tough not to fall in love with the random patrons that populated the bar. Knowing when they have a good thing going, the developer is in the midst of prepping a proper sequel with N1RV Ann-A. Based on the demo given, this is a title that looks to build on the already established world with new options and real booze.

That real alcohol comes courtesy of the new setting. Moving away from the underpaid populace of Glitch City, players now take the role of Sam, a bartender at a hoity-toity bar in a luxury hotel on the Caribbean island of Saint Alicia. Since this is a resort location that caters to the well-to-do, no longer are the patrons drinking concoctions that are barely a step above anti-freeze mixed to try to replicate the taste of the real deal. Here, whiskey is actually whiskey. Beer is still beer (though it’s still shaken before serving for some bizarre reason). 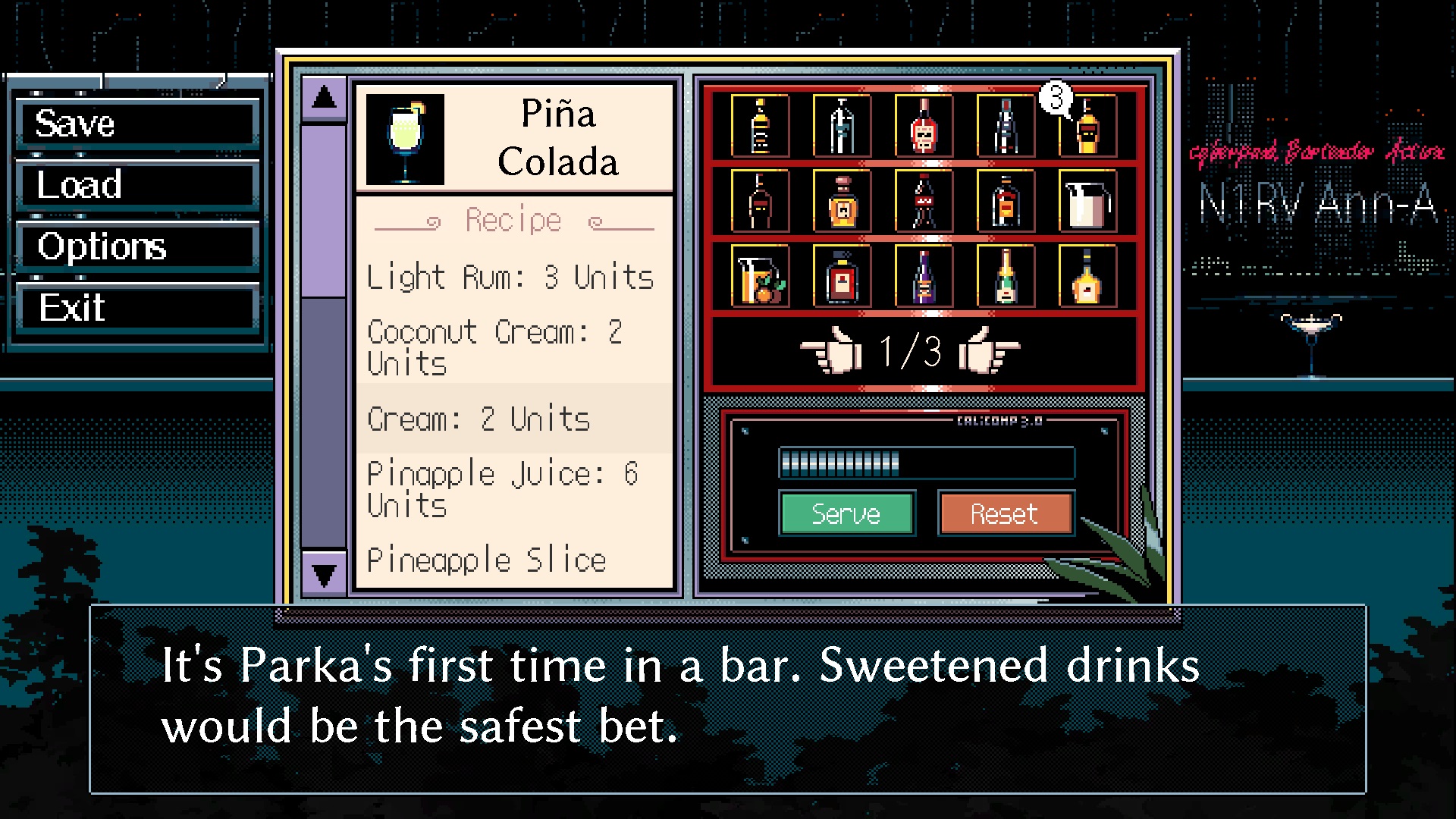 With the improved libations comes a range of freedom in the libations. Before, players needed to follow a recipe book to create something that could be served up. In the sequel, players with an idea of what they are doing can mix up their own creations to serve patrons. This might not seem like a huge deal, but it’s nice to have a chance to stretch the legs a bit in the interactive portions of the game instead of coloring in the ethanol lines, as it were. What gets served to the customer will still affect their mood and the path of the conversation, though, so it isn’t always the best idea to drown them in the strongest liquid lubrication, lest they become too inebriated to talk. Also adding to the interactivity is the mood system, where the player has more control over how to respond to a customer by selecting how they player feels. They seem to change each time the option comes up, but choices like Flirty, Angry and so on will move the dialogue in different directions, adding to the replay value.

The demo showgoers were able to experience a conversation with Olivia. She works for Kagami Biotech, a firm that makes various implants for people, and most famous for the spleen implant. As the conversation goes on, we learn that she is becoming increasingly disillusioned with her work, particularly the constant backbiting the staff pulls on each other in order to just get a bit ahead. One of the stories she talks about involves a female coworker who takes a larger amount of the grief from others, including Olivia, who admits to pinning some of mistakes on the poor thing. After this woman was the victim of a poorly-constructed deepfake porn job, she finally snaps, pulling off her top and pointing out that her chest is obviously not the one on screen. It’s a disturbing little story and one that sets the mood for the exploration of technology, and how it affects humanity now and into the future. 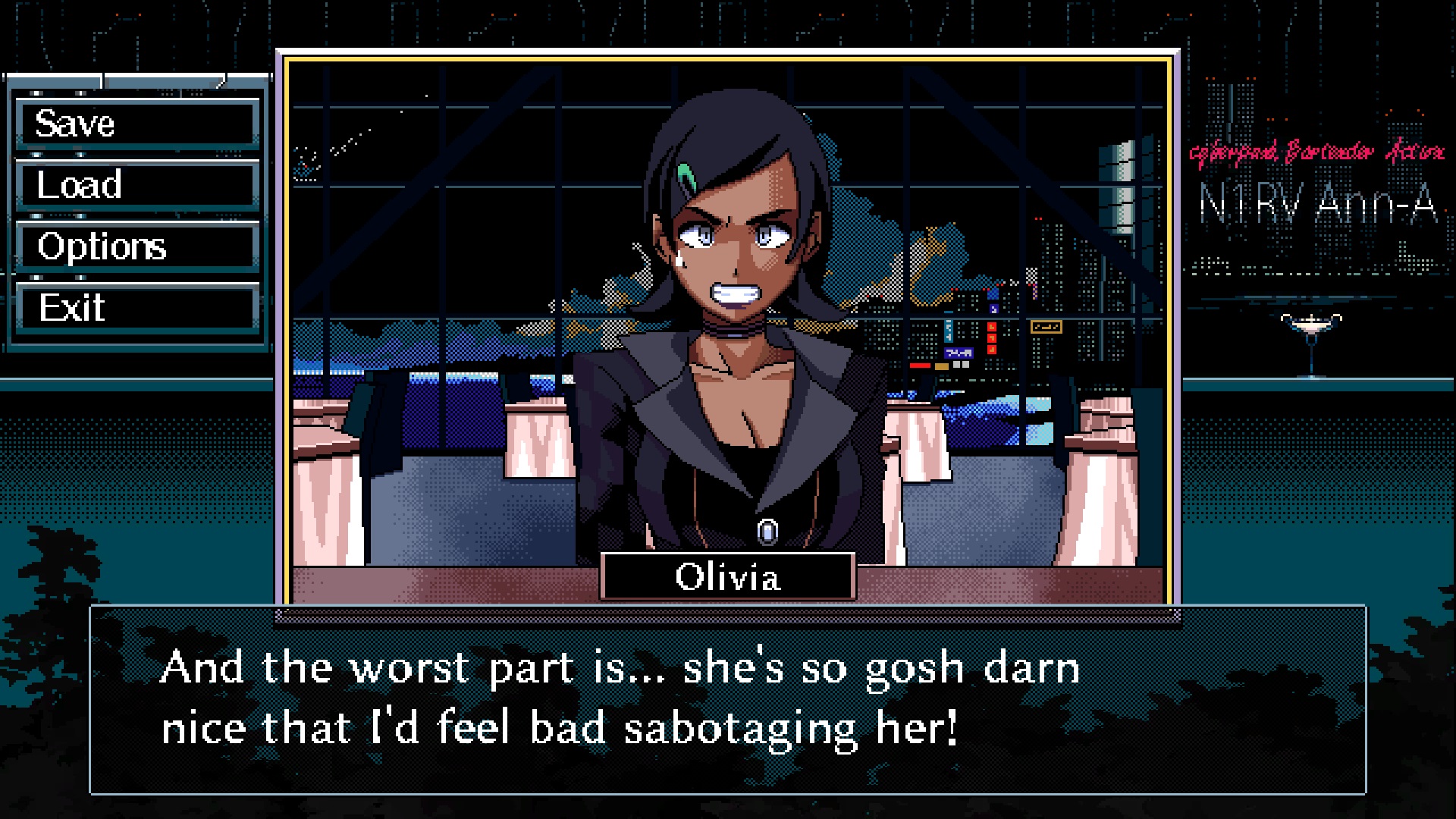 It should be noted that, in addition to Sam, players will also explore the story of Leon. He is man with a less than savory gangster background, trying to decide what he wants to be in life. Is his family the most important thing to him or should he place his real allegiance with the criminal element that keeps him employed and fed.

Having only experienced one conversation out of what are sure to be many, it’s too early to gauge the overall plot and topics that will be explored. The developer did state that one of the central themes is how society will proceed in the future. How will it affect our behavior to our fellow man. It’s certain, based on their previous work and the demo, these topics will be explored with a distinct lack of fear, injecting humor to make the bitter pill of a potentially depressing subject matter easier to swallow. Players will be able to delve into the world of N1RV Ann-A later this year when it releases for PC, Linux, Mac, Switch and PlayStation 4.