Let’s inject a little bit of honesty up front: I wasn’t sold when hearing the pitch for KillPixel’s Wrath: Aeon of Ruin when I first visited the 3D Realms booth. It broke down to “we were talking to these guys that are basically Quake Necromancers that were putting together superb mods for the original game and we asked them to make one with us. The drive was what if Quake II was a direct sequel instead of the sci-fi game we got.” Now, I enjoy retro gaming quite a bit, but despite the fact that it was cutting edge at the time, the look of the original Quake didn’t exactly age well, with muddy textures and seemingly nonsensical enemy design. Thus, it was with a bit of trepidation that I sat down at a PC to give the work in progress a go. I was forced to eat my misgivings with a healthy side of crow, because this is a game that pulls off exactly what it wants to do with talent and aplomb.

Right at the beginning, the player is given a wicked looking wristblade and allowed to learn the feel of the regular and charge attacks on a group of shambling ghouls. A few slices removes valuable appendages from the monsters while the alternate charge attack obliterates the things in a shower of viscera. Not much later, it’s learned that the charge can be used to air dash, extending the length of a jump to reach some out of the way power ups. From there, the game becomes a steady stream of new weapons, and a combination of wide open spaces and cramped corridors to use them in. 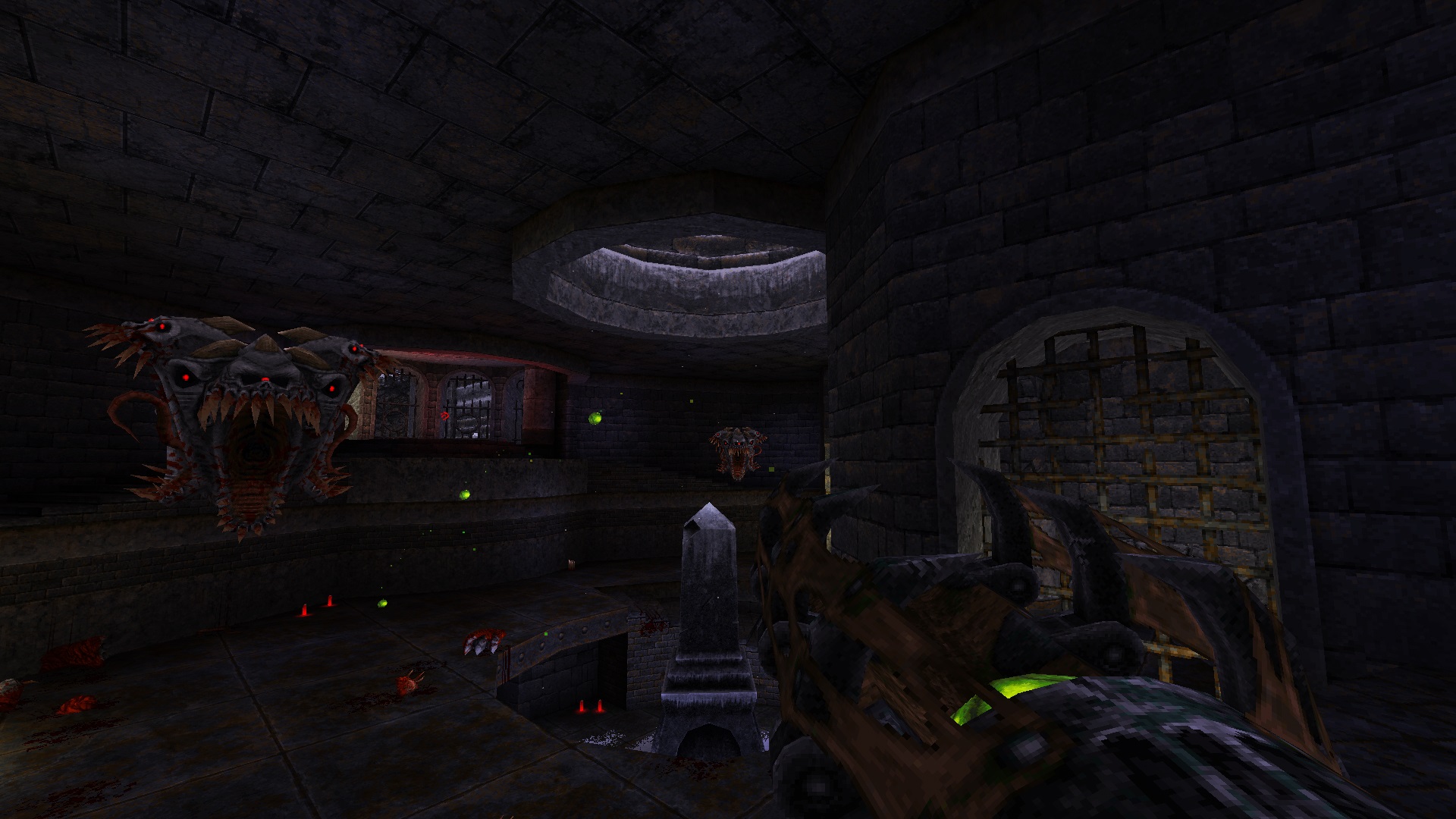 The weapon that became my personal favorite was the double-barreled shotgun. The normal attack behaves exactly as one would expect, putting out an immense amount of damage at short range compensated by a reload time (most weapons don’t require reloading here). It was great for clearing out areas, especially when directed at some green, acid-throwing abominations that explode upon death. When some really big beasties pop up, the alternate fire is what I internalized as the “F-You” attack, requiring a few second charge for a devastating shot that could clear out a swarm of the nastier creeps in quick order.

The enemy design shines through here. The basic ghouls appear to have been stripped of all flesh before being set upon the world to moan and fall apart under the withering rage of the player’s superior firepower. Then there are the white, gun-toting things that take more than a few shots of the ridiculously over-sized revolver players earn early on. A mixture of these and the flying locust like creatures are apt to ruin the day of an less-than-attentive gamer. The one that really managed to give me the hibbly-jibblies would be Wrath‘s toothy take on Doom’s Pain Elemental. The first time I met one of these, I’m ashamed to say that I actually panicked a bit, as it could approach faster than I could run, soaked up my bullets and quickly devoured my face with its massive craw. 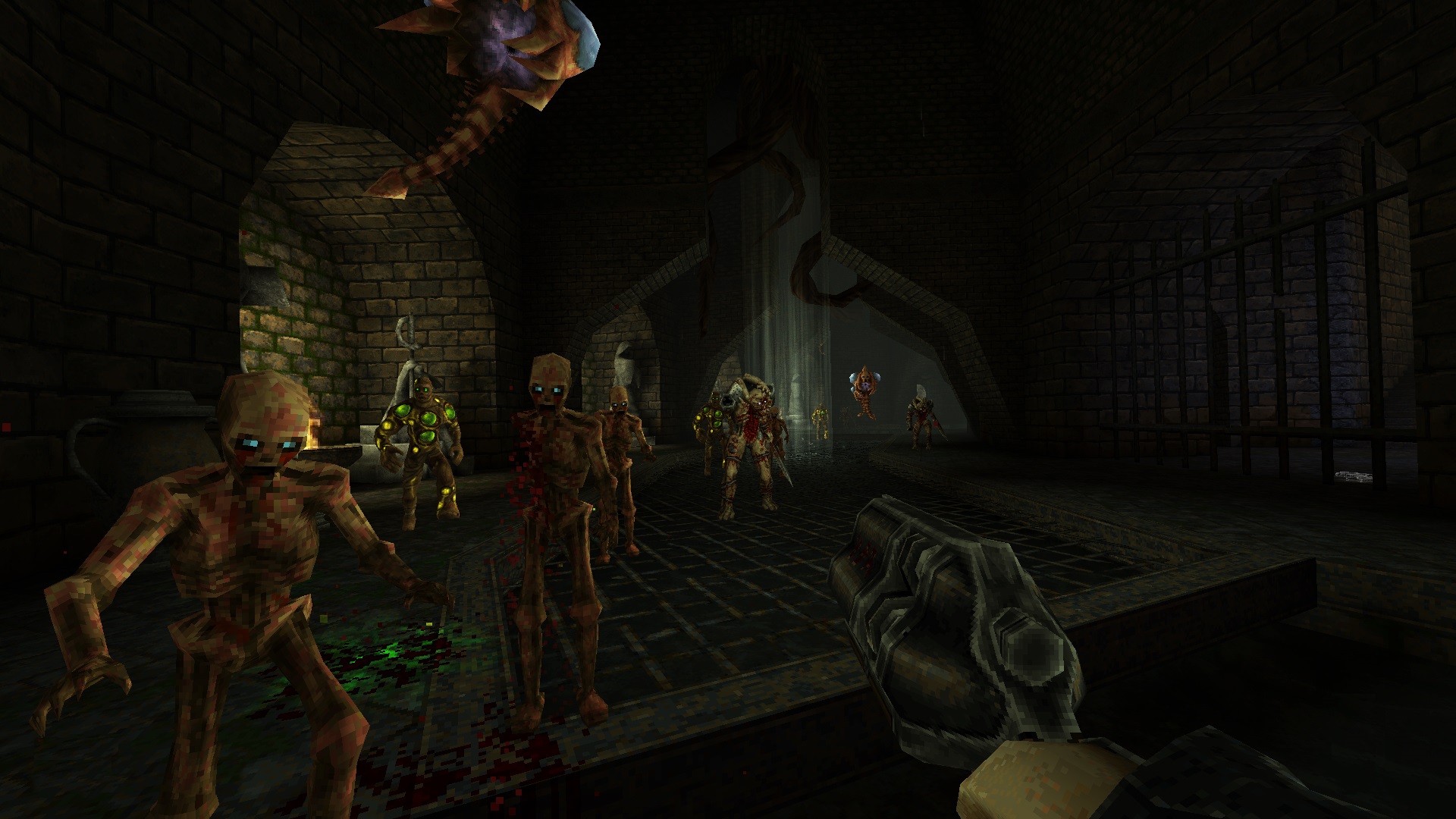 The thing is, I shouldn’t have freaked out. This is a game about managing the field of battle and the enemy lay out. It will throw quite a bit at the player, but strategic use of the weapons against the right monsters will win out in the end. It’s balanced perfectly to elicit the strange mixture of simultaneous panic and feeling bad-ass while dealing with the swarms of foes it puts against the player. While other games have chased this tone, few have managed to harness what made the classics work the way Wrath is pulling off. This is something that should be commended.

It should also be pointed out that the concerns about the graphics for this Quake Engine title are unfounded. It does take more than a little inspiration from the titles of the late 90s, but it doesn’t simply ape them. The monsters are chunky and the textures are blocky, sure, but it all fits together as a cohesive whole, creating an experience that isn’t a technical marvel, but is an artistic one. The developers could have thrown together some facsimiles of the original environments and beasts and called the job done. Instead, they are making a game that feels retro without actually being a complete throwback. 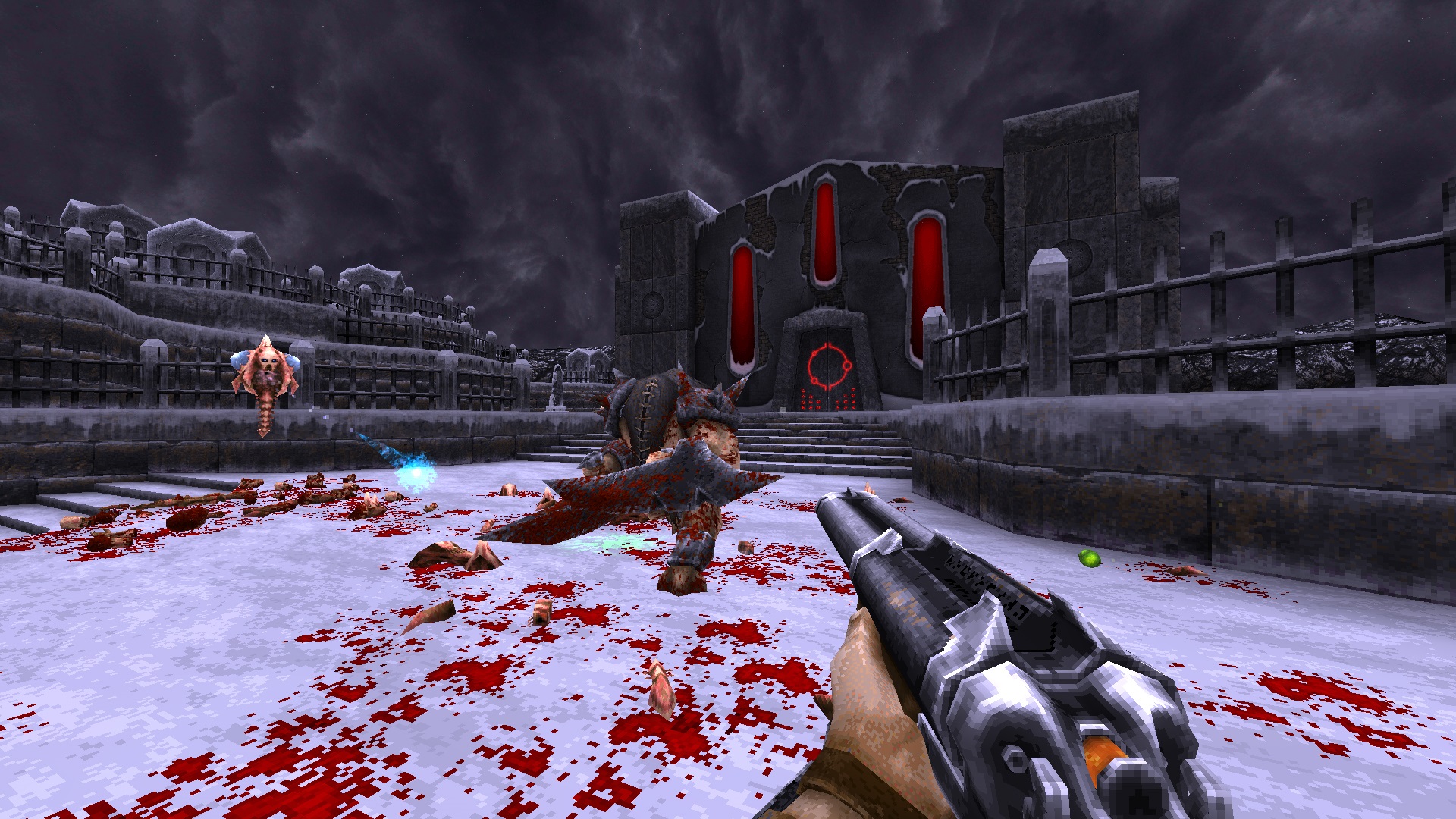 All in all, Wrath: Aeon of Ruin should be something that any fan of first-person shooters should take the time to check out. It’s fast paced, violent and a bit scary in all of the right ways while feeding on the nostalgia of fans. The fact that KillPixel isn’t being lazy about it and really crafting a love letter to the era is something to be commended. It’s set to release fully for Switch, PlayStation 4 and Xbox One later this year, but PC fans can snag the Early Access version right now on. From the demo that was shown off at PAX, it’s already worth it.