It’s never a case of will Bandai Namco adopt a popular anime/manga brand for video game format and more simply which one. The question of when doesn’t even need to be asked either; the developer-publisher’s reach is deep when it comes to the Shōnen sub-genre, even if the output of their video game iterations are arguably less so. Comprising long-standing names like Dragon Ball and Naruto, to the more recent My Hero Academia, Black Clover and Sword Art Online alike, Bandai Namco’s efforts on the adaptation front have been, putting it mildly, mixed at best — ranging from out-right duds to serviceable-enough love-letters to surprisingly entertaining games that manage to stand on the merits of their gameplay as much the appeal of their IP. While many may be more familiar with the studio for helping to bring original contributions to the masses, from Tales to Ace Combat to Soul Calibur and more, Bandai’s efforts to bring virtually every anime property into the fold, no matter the demand, can’t be ignored.

But a lot of these names are ongoing endeavors — names that are familiar not just to present-day audiences, but to audiences worldwide, spanning decades. It’s not something you could associate with a series like Captain Tsubasa — the 1980s manga centering around the sport of football (and no, I won’t resort to using the Americanized “soccer” alternative here) — even if this isn’t the first adaptation for the series. Its last effort dating all the way back to the Nintendo DS, the idea of a current-gen console variant appearing to have gone a miss for the second generation running. Even for a manga whose success should not be understated, its global appeal has been rather selective — not making as big a splash out west. Add to that the divisive allure of the sport in question and it should come as no surprise why Captain Tsubasa hasn’t exactly been front-and-center as of late. 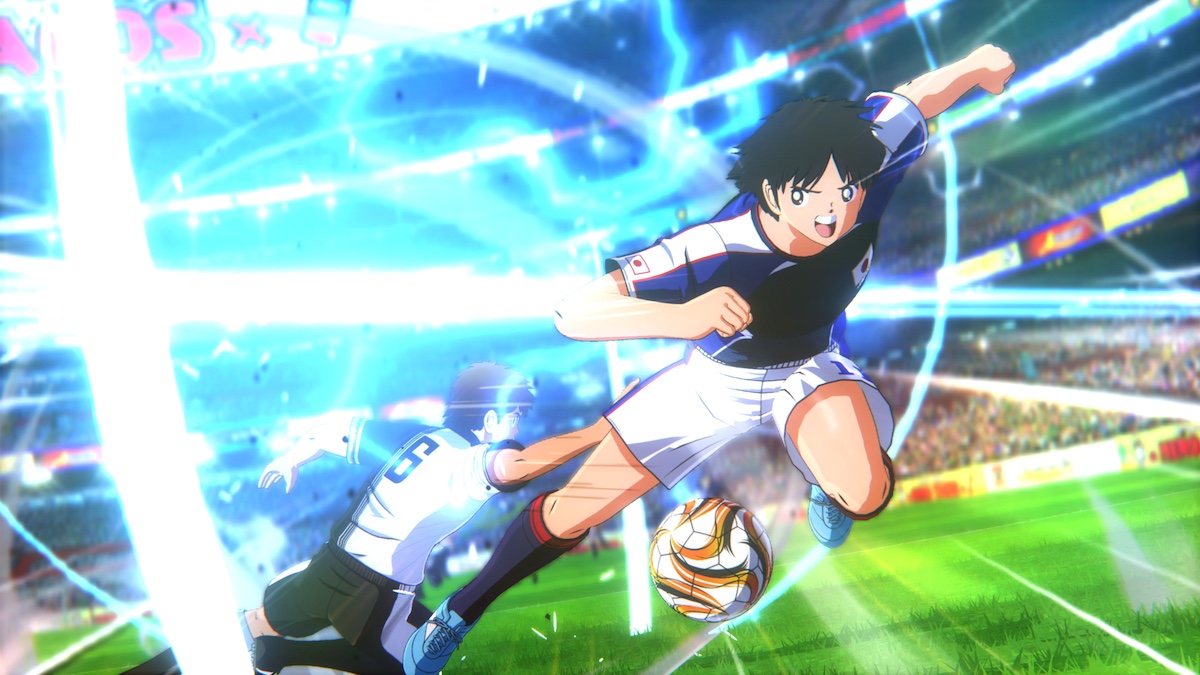 You might then think that this latest adaptation is simply Bandai’s burrowing evermore into the near-bottomless pool of IPs to build a game around. Not exactly the most renowned, but another to fill the schedule. And while there is some acknowledging the game’s staying faithful to the style — specifically the character design — of the original manga, like any of the games of this ilk, one has to wonder just how far the appeal can go when it comes to its actual gameplay. If not the most tactically-deep or intricate football entry, one that’s competent enough to enjoy and come back to. It might not have the detailed animations or off-the-field strategy that industry behemoths like Pro Evolution Soccer flaunt, but as you quickly come to realize — as explained in the game’s presser about this being a more “exhilarating action game” that tailors more to the arcade take on sport simulation — Captain Tsubasa: Rise of New Champions has far more to say than just the intellectual property it’s tied. Better still, it’s surprisingly adept to the most typical of match progressions. Namely, playing such a patient, albeit-defensive, strategy…only to slip up for a second in the 85th minute and concede a late goal. The match ending 1-0 to your opponent.

This is exactly the kind of annoyingly-addictive gameplay loop that makes PES the gallant football series that it is (a much more enticing equivalent to FIFA’s style-without-substance efforts). But the reason why I’m even daring to mention PES and an adaptation to a 1980s sports manga in the same piece is largely down to how well Tsubasa sets itself up as. More importantly, how Rise of New Champions allows gameplay to stand on its own. How it here prioritizes the building-up, the eventuality, of smart decisions and thoughtful moves during play. Rather than any and all excess source material it feels it’s required to go over for the sake of appeasement. Perhaps the full game may do that, it may not, but when it comes down to it — when you finally get around to circumnavigating the 22 players spread across a virtual pitch — gameplay becomes the priority. There may not be a pre-set of formations to choose from or anything that pertains to some managerial decision-making on the side-lines, but for a game whose arcade-like simplicity is apparent, the dread of conceding — as much the elation of scoring yourself — remains and in the end that may well be enough to keep the experience from feeling dull. 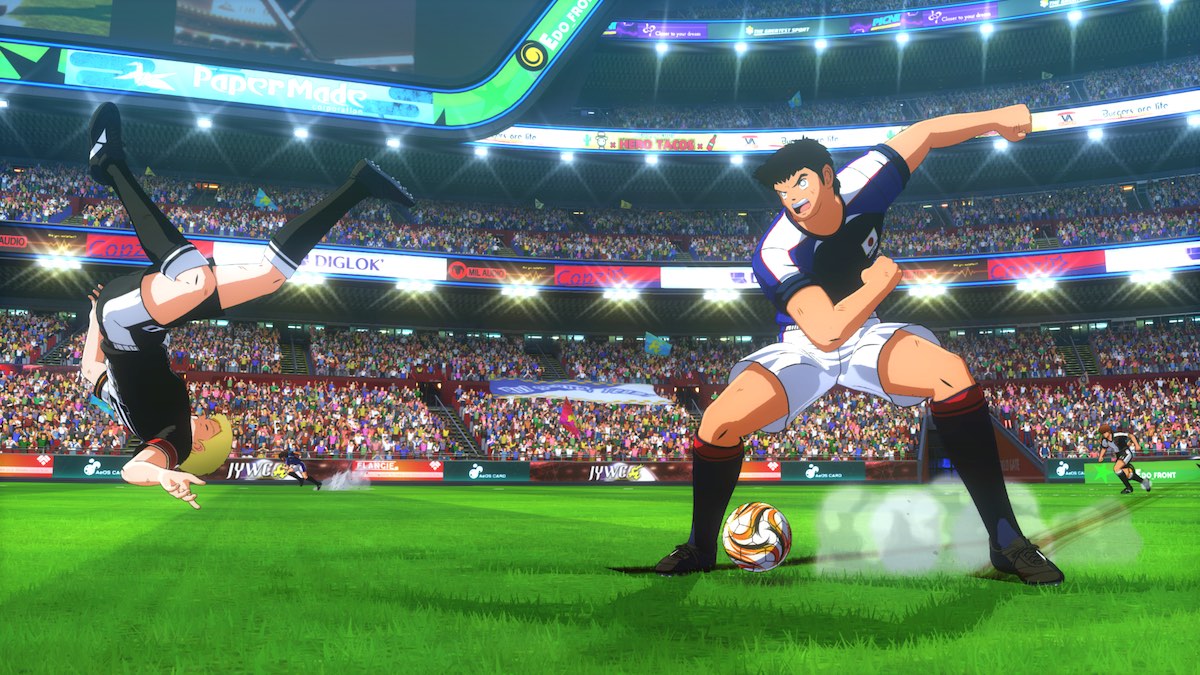 A lot of which revolves around the stamina mechanic and how smart (or short-sighted) you are with making sure teams are not simply co-ordinating with one another, but are making tackles and rushing into the opponent’s half where it matters. Some systems are of course automated as they usually are — teammates will try and get into useful pockets of space as your opponents similarly try and snuff out all possible routes forward — but even when the game may find the urge to indulge in that repertoire of anime exaggeration, these moments don’t break the flow and rhythm of play. Even upon a successful tackle or stealing possession (to which the game enters into a brief cut-away animation, your opponent often sent flying into the air, a face of frozen, stunned shock), the brief slow-down and flash of color, do little to detract. What’s more, Tsubasa just about manages to have this mechanic serve as one needn’t requiring some tell-tale prompt for players to quickly understand when it might be best to require a bit of stamina.

Again, the onus is on players to decide for themselves if the risk of conceding, demands a player or two to eat away at their stamina bar. Suffering the consequences late-on if that tactic turns out to be the incorrect one. Like all games of football, man management and reading the game in the long-run is just as vital as the short-term requirement of passing, lobbing over and maybe having pop-shots at the keeper from 20/30 yards. Thus, perhaps the most delightful take-away from one’s brief time with the game earlier this week: underneath the license, the manga brand and possibly the inevitability that source material is sure to take center stage, Tsubasa potentially stands as a sports-orientated title with a plentiful amount of mechanics to master. An anime adaptation that actually wants to stand as a genuinely well-built, genre-honed release. 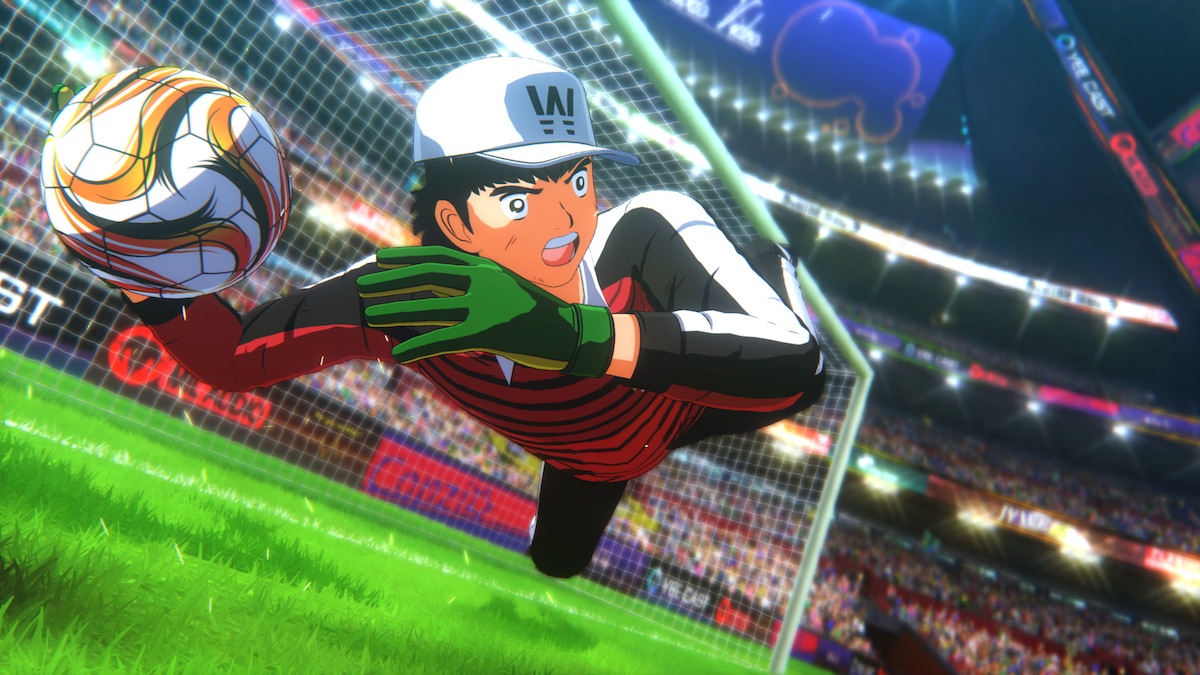 Short-term, Tsubasa’s gameplay is indeed minimal and straightforward — maybe even a little reliant on good fortune and some not-so-hidden RNG when it comes to the state of your stamina bar versus the probability of maintaining/losing possession. Notably when you, or your opponent, decide to trigger what’s referred to as the “V-Focus” mode, the camera focusing in on pre-set animations of that particular player having a strike at goal. Upon which it pans to the keeper attempting to maintain possession of a ball coated in either orange, green or blue energy of sorts. The result being they manage to hold on and clear the threat (either holding onto the ball or parrying it away) or they let slip and the opponent scores. If there’s one major criticism of Tsubasa at this moment, it’s that the game doesn’t make it clear if the probability of scoring is entirely stamina-based. That it’s just a case of wearing a keeper down enough, or elements like range, angle and type of shot, factor into things. Just how far, and deep, do the simulation aspects really go here?

What’s more, are the “V-Focus” moves the only theatrical way to score goals in this game? Or can players easily do without this required-veering into cinematics — that one’s attempt at a shot from 30 yards out and hitting the cross-bar was instead possible and not just an attempt to funnel players into using a gameplay mechanic. Attempts excluding such are simply not allowed end-of. Naturally there are also some momentary oddities in-play that also stick out for the wrong reasons. Namely the way opponent AI can on occasion devolve into unnecessary passing — the camera struggling to keep up as a ball pinballs across the pitch. Also, another PES comparison here though one that’s less-savory: keeper’s can sometimes enter into animations that don’t fit the severity of the situation. A wild dive to the side…for a ball that’s slowly crawling towards them a few yards away. Decision-making and awareness AI are often guilty of in these kinds of sport titles, but a notably uncharacteristic presence regardless. 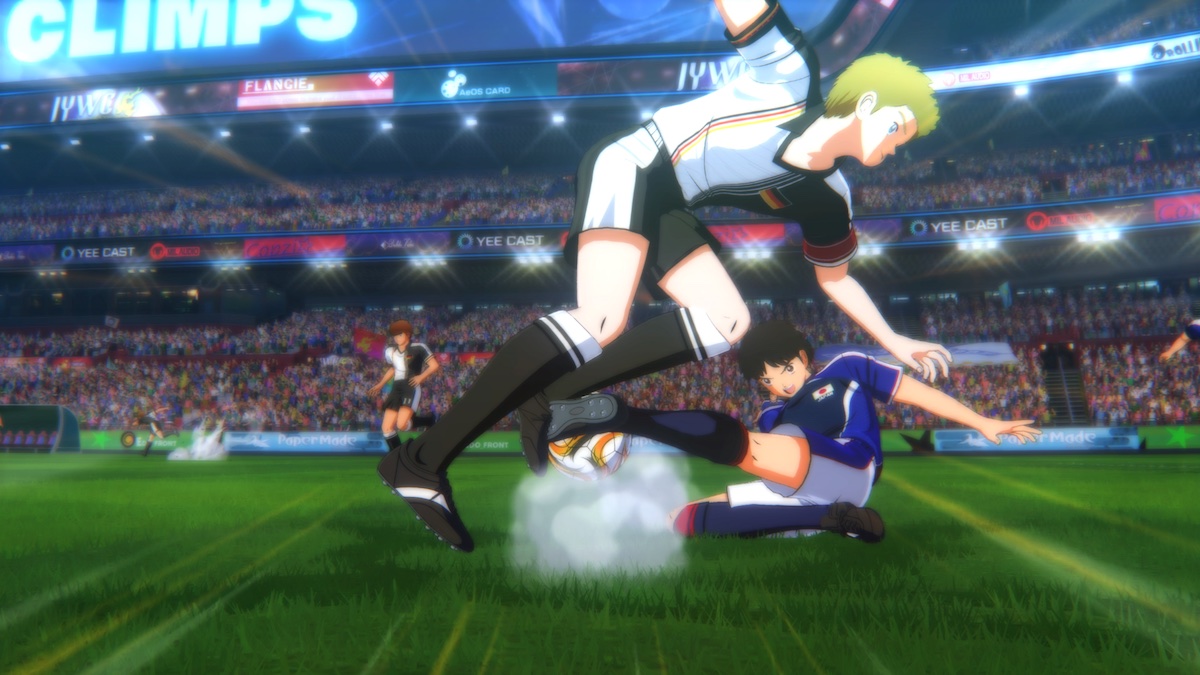 If all these questions end up giving the impression of a game not entirely clear on the limits and requirements of victory, it’s more likely a result of one’s amazement that an adaptation of this kind can spark such passionate reading into the sport it’s trying to represent. Naturally, this is just a mere slice of what the game has to offer — a few quick matches away from the backdrops and character roster of its 1980’s history — and it will be interesting to see if the game will feel that itch to fall back on source material or series history as a way to accommodate those purely in it for servicing. For everyone else — myself included — the arcade-like momentum of slowly-but-surely attaining victory, yet one that is not without an occasional delving into tactics and some opportunistic chances at goal, may mean Captain Tsubasa: Rise of New Champions could hold a crucial edge over the large bulk of Bandai Namco’s vast, vast catalogue of anime/manga-inspired releases prior. To come into a 1980s manga and come away focusing instead on the necessity for strategy in a game of football: PES nails the emergent, emotional thrill of the sport and somewhere, somehow, hopes are a touch higher that Captain Tsubasa could achieve that too.