Like a lot of opinionated people, my experience with Sword Art Online can be summed up in as little as a sequence of cascading states: middling expectation, heightened intrigue, topped off with calamitous disappointment as early as the first series’ half-way mark. Disappointment in both the gradual progression and pay-off, but also in the knowledge that one’s hopes had — for as brief a time as a few series episodes — seen a small, opportune increase dashed. It’s not uncommon to see this outcome (as much a line of thinking); if not completely oblivious, unaware would perhaps be a better word to describe the extent to which I felt around that time as to the supposed buzz surrounding this particular set of light novels-turn-anime run. Debuting in 2013 in the West, as divisive (a kind word there) its current three-season run has been, Bandai Namco have made no effort to refrain from capitalizing on the property’s heightened popularity during the mid-to-late 2010’s and beyond.

Sword Art Online: Alicization Lycoris is 2020’s near-annual return to the IP and one that (to some extent, there’s some surprise) decides against having players carve out their own avatar in the chosen video game “setting” this time round. The deviation away from 2018’s Fatal Bullet grows evermore, with Alicization Lycoris instead reverting back to putting players in the shoes of series main-stayer Kirito with supporting characters from the Alicization arc (more specifically the canon of its latter half) also playable in what is described as a “spin-off JRPG” format. To add a bit more detail here, an open-world JRPG whose combat is real-time — requiring your party of four to engage in synchronous and co-operative encounters that are sure to have you leaning into all corners of the deep, complex mechanics. Note: deep and complex, but not necessarily simple to grasp and thus, the reason for Alicization Lycoris’ fleeting suggestion of genuine enjoyment here. 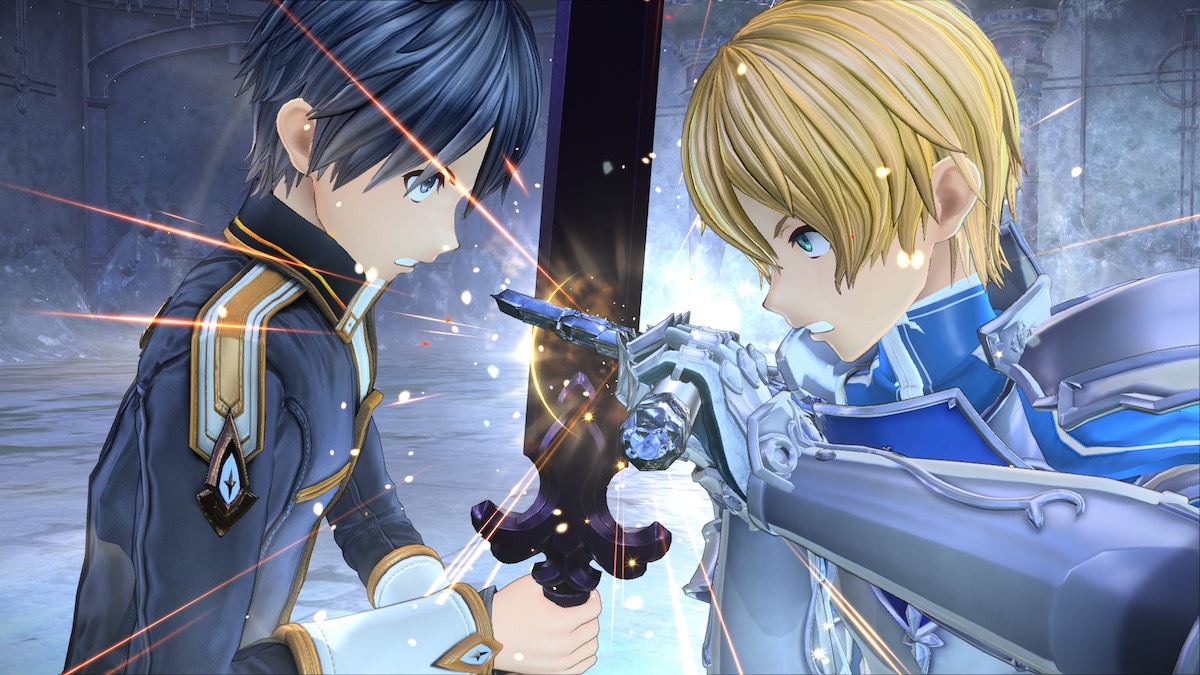 Despite the brief time getting to grips with it in and out of a major, story-based boss battle, combat does at least house a few tactical suggestions on top of its regular balancing of attacking and blocking incoming attacks alike. Skills for each of your characters are divided into two categories: sword skills and combat skills. Activated via a simple combination of the shoulder button plus either a face button or D-Pad direction — combat skills serving more as the would-be support aspect towards both your remaining party and yourself. There’s also a third compartment, referred to as Sacred Arts whereupon attacking enemies with said skill enabled boosts its effectiveness. Unfortunately — as helpful this section is, given the elemental nature of the options at one’s disposal — it’s not exactly the simplest tool to pull off. A complication that the preview build’s on-screen prompts still give little away so far as ease of understanding.

“Not exactly the most simplest” is probably the perfect surmise for the kind of real-time combat experience SAO is venturing towards with Alicization Lycoris. Fitting it may be that the multi-colored bars and tabs — together with its multitude of flashing effects and DPS values pouring out of foes — are trying to keep in line with the MMO aesthetic this iteration (as much the SAO series in general) features prominently as its main UI. But rarely does it feel like the gameplay is easy to keep track of. Or at least is offering some sign that players can find a way back into the nonsense on show. There are some brief flashes of advisory moves to pull off — a suggestion that an enemy, in one state or particular charging-up of an attack, is susceptible to a certain element or Sacred Art. A complimentary message indicating that the right move was used and thus the enemy is in a weakened state. It’s not that there isn’t plenty to work out here (because there’s a lot to take in with this combat), it’s just that Alicization Lycoris struggles to motivate players in getting back into the rhythm once it’s lost. Easily slipping back into mashing the standard attack and an occasional aerial move for good measure. 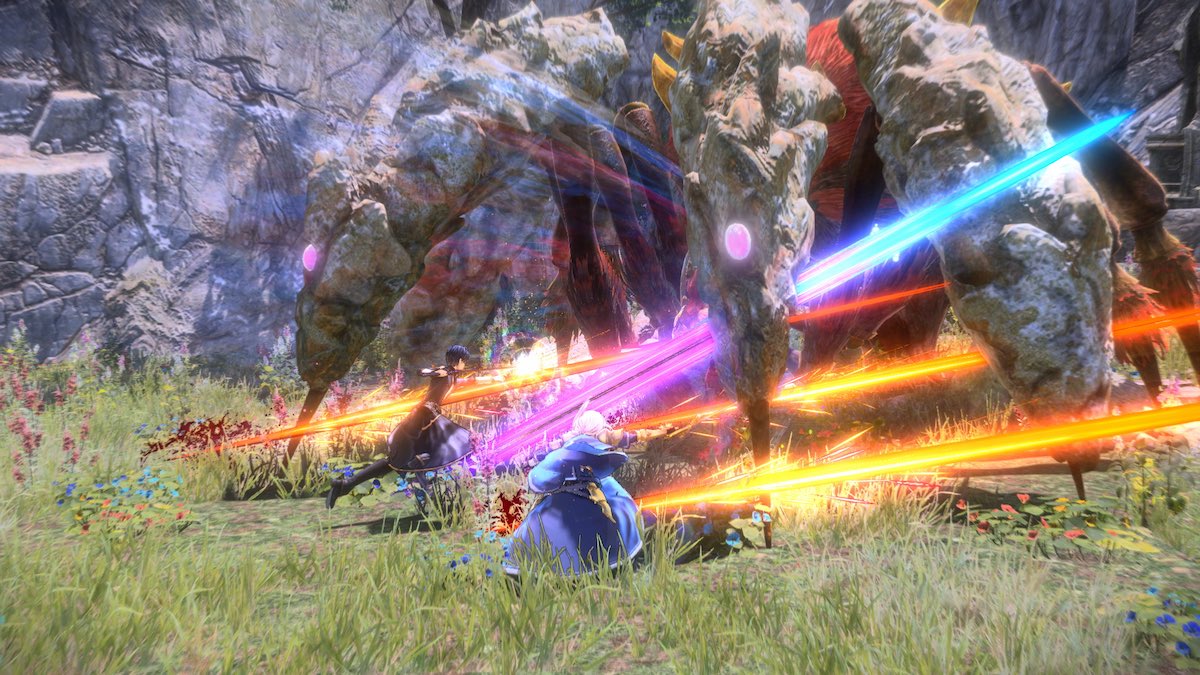 The fact your “trustee” companions (and in the context of the story arc, these are literal AI/NPC’s part of the major setting of The Underworld) can often deviate from the enemy or monster you yourself have targeted, doesn’t help. As had happened a fair number of times — making easy pickings of lowly creatures as I myself wanted to go against a larger, more formidable foe. In general, like its interface, there’s a surprising lack of mention as to whether or not your party are engaged in helping one another out. Or that an assist has even been successfully implemented — less a party and more four characters doing their own thing in an attempt to get a health bar down to zero. The slow pan as you switch between which one you want to control oddly enough works — as opposed to some immediate snapping-to — but maybe the reason for that pleasant design choice has less to do with the combat and more the fact that Alicization Lycoris may hold at least one saving grace: its world.

Even if the preview build was confined (for one of the two playable scenarios) to but a fraction of the overworld, there is some pleasantries to take from out simply navigating the environment. Deciding against following the pre-assigned route which guides players to the next objective in favor of detouring down one path or another. And here’s hoping that that element — the world, the reason for staying invested in the tale being told — can help mitigate an otherwise convoluted battle system that, admittedly complex, doesn’t necessarily feel like one deserving of hefty investment. Whether or not it’s a positive for those having never watched any of SAO’s recent story to come to Alicization Lycoris; that aim to stay faithful to the source material, on paper, does mean the self-inserted, speechless avatars are out of the way this time round. The bigger question is whether or not the game’s world — let alone the gameplay at its heart — can at least offer a modest amount of curiosity. A way to cut through the complexity and the convolutedness, and to appreciate (hopefully) the downtime in-between. Sword Art Online: Alicization Lycoris will be available for PS4, Xbox One and PC on May 22.