The more I played of Disintegration during its recent multiplayer beta, the more I was [indirectly] reminded of Titanfall. More specifically its sequel and how Respawn were able to certify their vision of a first-person shooter that wasn’t just about beating your opponent to the trigger (back-end servers aiding that success or not). There was genuine strategy, awareness of aerial space, and on top of that a single-player/story campaign that was surprisingly enjoyable in the context of titles more known for their online elements than their otherwise offline accompaniments. It was just fun to move about in, more than anything. A competitive shooter that wasn’t anchored down by some “boots on the ground” mantra wherein the only success lies in how fast your trigger-finger is.

It’s unfortunate that a preview has to start by talking about an entirely different game, but my point is to highlight how, like Titanfall, Disintegration had the early promise of a shooter that wasn’t afraid to break from out the mold of fixing everything to the ground. After several hours returning to either one of the multiplayer’s two modes on offer though, Disintegration already leaves a lot to be desired and admittedly feels like a game players must desperately reach for in order to find some semblance of fun to be had. Certainly not the response developer V1 Interactive may want to hear, but one suspects this may be a shared sentiment. A lot of one’s confusion — let alone concern — can be put down to the structure and execution of its multiplayer premise rather than any and all performance hitches that made themselves be known throughout time spent with the PS4 version. Repeated an expression this may sound to you: Disintegration‘s intentions are at least commendable. 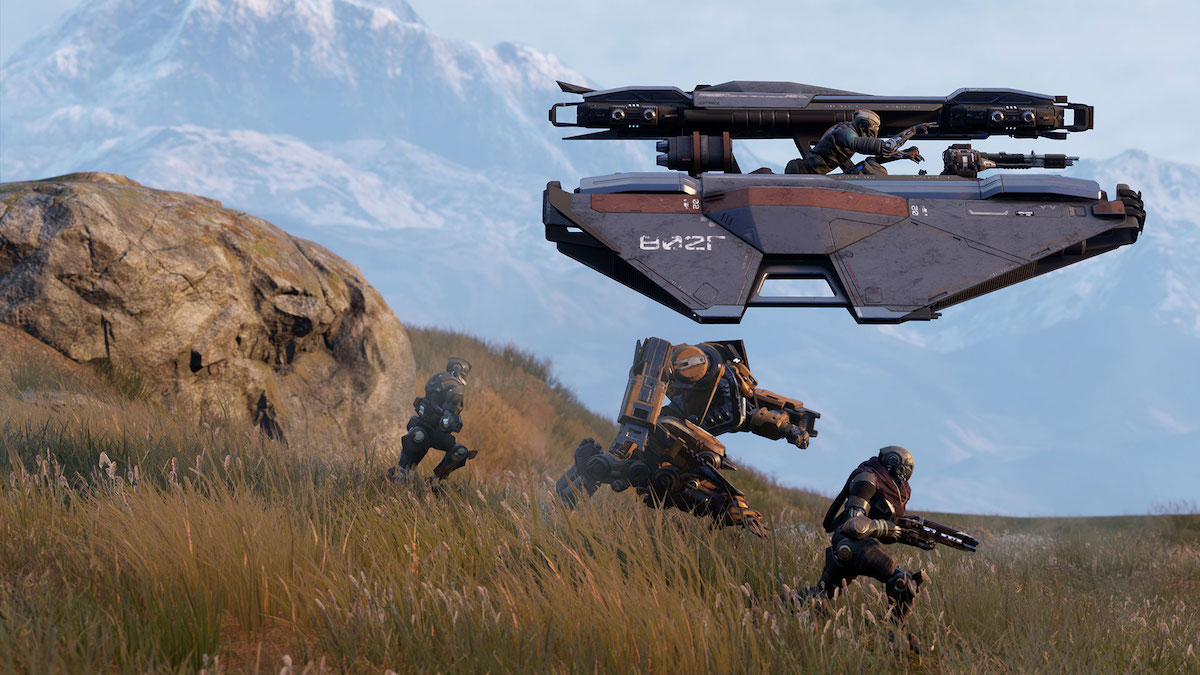 There are good ideas here, ideas of which are buried so deeply beneath a user interface that is all manner of off-putting and ill-defined. From the unnecessary hogging of space by the sides of your anti-grav vehicle to the minuscule command prompts for your team of up to three units; the sluggish pace you move about the map, a general lack of spatial notification for where everything is. Even the hit reticle you almost have to squint to see amidst the muffled, compressed sound design that makes everything sound anything less than punchy. You’re so caught up in trying to work out if your bullet-fire is having any effect on the opponent put before you — or the AI-controlled units you rarely seem to hit despite near-perfect targeting — that you can often lose sight of the fact that all three of your support units are down. That you need to go back, hover over them and wait for them to respawn. And in most cases, you can so easily forget you even have (or ever had) units to help in the first place.

Again, the intention here is clear as day. Disintegration is aiming to inject competitive shooters with a bit more of a clear and direct entailing of strategy and unit management. On top of simply chipping away at your opponents’ health bars. On paper, the premise sounds promising and overdue for this genre — even if the alluded-to “strategy” element is basic and merely surface-level in depth. Nevertheless, I do long for a shooter that indirectly takes away reliance on a game’s back-end. The RNG-like gamble that the game will agree that…yes…you did indeed fire the bullets from your gun first and thus, should get a kill. And not that an enemy player has had time to turn around — despite getting a head full of bullets — and kill you instead. Disintegration‘s interplay between a cat-and-mouse foray, combined with that commandeering your affiliated group of up to three units — each with their own offensive/defensive actions — should be the interesting pull here. The hook that keeps matches tense and evenly-poised. 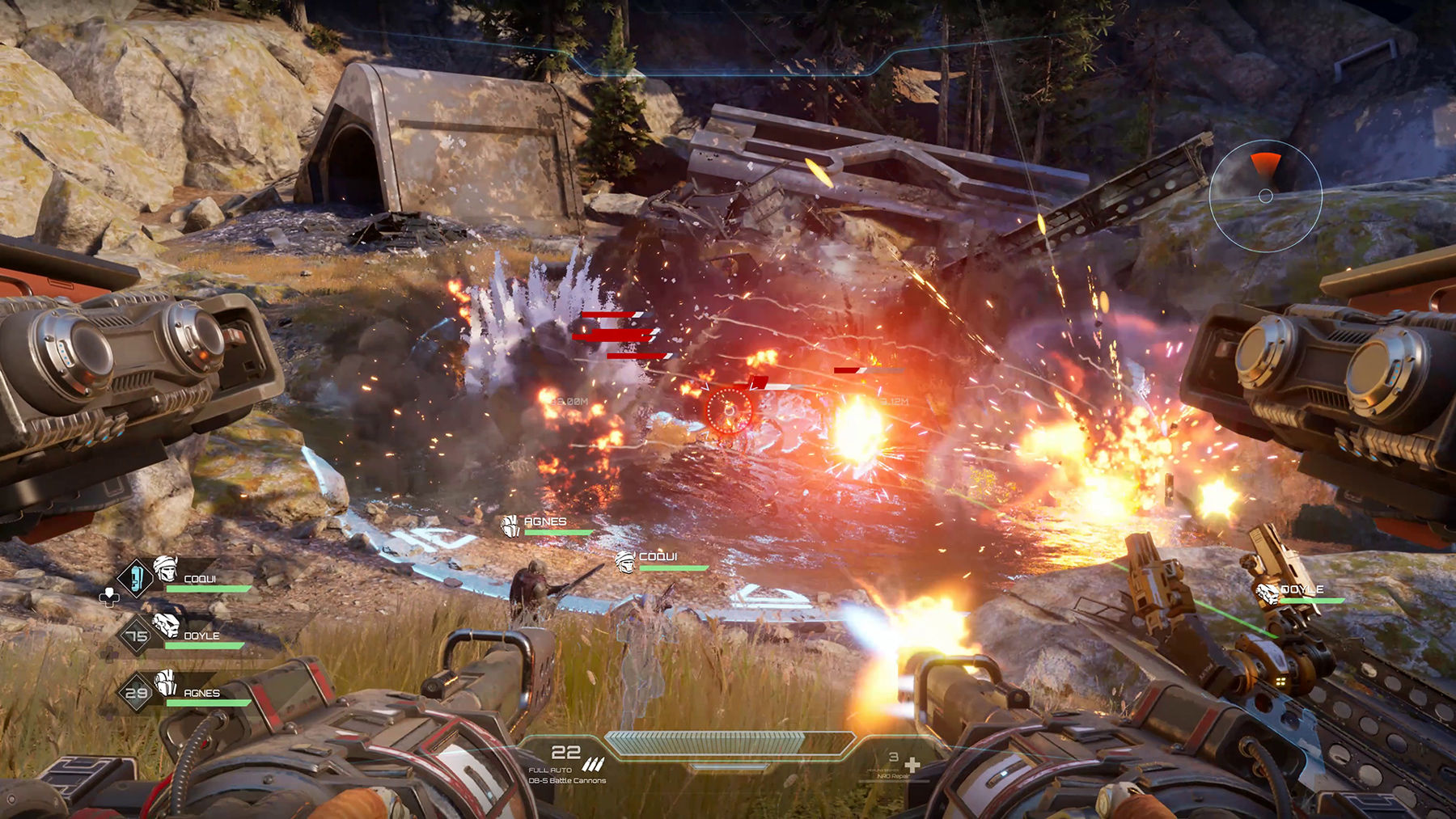 When it clicks, it’s enticing to work out how well to deal not just with these support units, but of your opponent who too, no doubt, is having to balance the same kind of decision-making. The strategy implication, if secondary to the primary moving-and-shooting, is a tad too cumbersome for its own good, but it’s better than just “beat your opponent to the trigger”. The problem is that when it doesn’t click — which on average, equates to about 80% of a match’s duration, regardless of mode — Disintegration is, at best, credible in its risks, but at worst, simply unappealing on all fronts. Moving, attacking, even digging through the offered classes/squads with their own specific weapons and perks — a key area that needs considerable balancing if this thing is ever to see the light of day. Why on Earth should I settle for a rifle with a thirty-round magazine that you are constantly/annoyingly reloading every five seconds, when a heavier machine gun — with a longer fire rate, better damage output and shorter (not longer) cool-down period — does the job better. Why would I need to worry about a vehicle with lower defense and/or a grenade launcher when the potential risks or benefits of either feel lost in the random jumble that is most matches?

Even the two maps on offer don’t help to exemplify the premise Disintegration is aiming for here. Where’s the emphasis on verticality, on weaving in/out/around obstructions? Why settle for familiarly three-lane offerings that would be right at home in a modern-day Call of Duty when the potential for multi-floor, towering level design would better suit combat that you yourself are initiating off-ground? Yes it would require a suspension of disbelief given your grounded support units would be constantly teleporting all the time, but with the way matches run at present, the ability for your AI to keep up doesn’t seem to be that much of a problem. Not that that’s a compliment in its entirety as it’s still a touch confusing to work out just who is which group and which characters are in fact friend or foe. The vague coating of red and blue to denote friendly/hostile players doesn’t help either — like a lot of the prompts in this game, they feel lost, almost unwilling to show themselves amidst a flurry of senseless desperation. 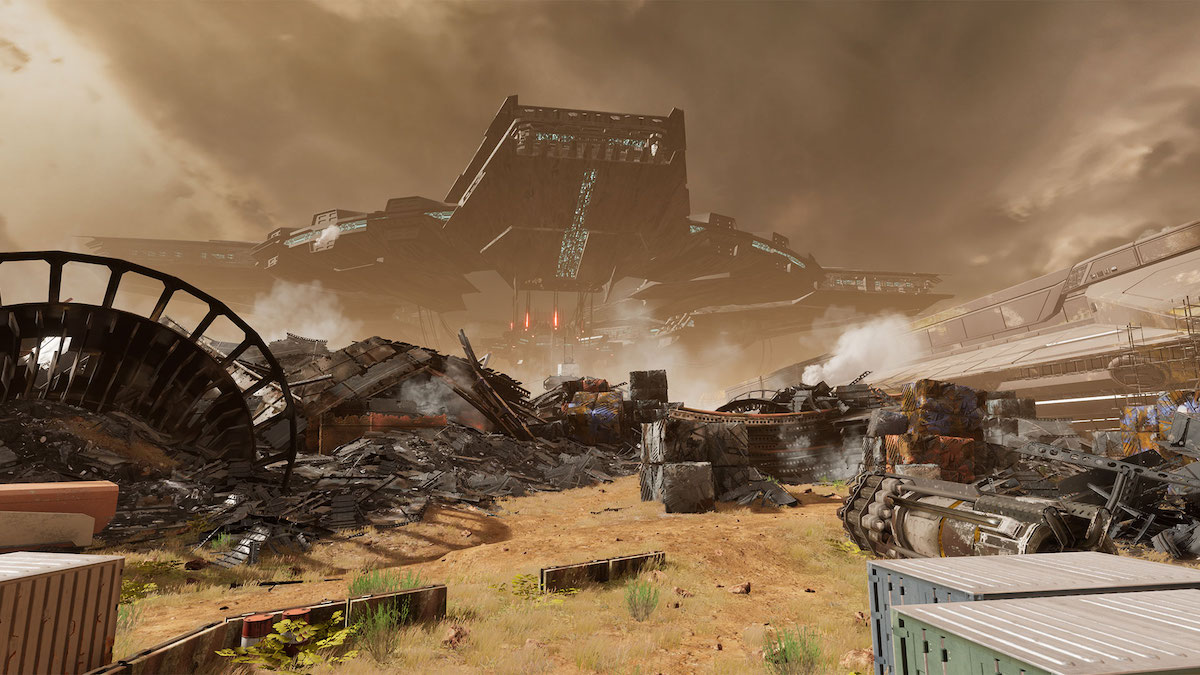 I’ve talked way too much as of late about the lingering hope (genuine hope I should reiterate) that a mere snapshot finds the means to bolster what it does right and circumvent that which it doesn’t. And I do mean it when I say Disintegration is an interesting idea on paper with its squad-like tackling of competitive shooters — minor an inclusion its strategic elements are. And yet, V1 Interactive already seem like they’re at a cross-roads with little idea on how to appeal to those already treated to established ideas, but also in how to flesh out fully their ideas in a way that’s enjoyable. In the end, neither objective looks even half-accomplished. What we have for the moment is more a flickering semblance of an old form of multiplayer, not a new one. What inventive or unique spin this game may propose or relish to express, lost in the stale, unappealing blur of blindly shooting and hoping it accounts for something. A shooter wherein the shooting feels all-but-deprived of worth — new ideas, ironic of all, that end up leaving a recurring sense of deja vu. The fear being that a simple tweak here or there may not do. The meager amount of positivity it brings in its current state, so inter-woven with lesser elements, that in the end, nothing less than a complete overhaul to Disintegration top-to-bottom, may sadly be the only means to salvage it.