Well, after games like Her Story and Contradiction showed how good FMV games could be, and games like Papers, Please and Not Tonight showed how good games about seemingly menial jobs could be, who’s laughing now? And in terms of combining the two, now we have Not For Broadcast, a chaotic news simulator from tinyBuild and UK-based developers NotGames that’s available in Early Access right now. And from what I’ve seen so for, it may just have the potential to be another successful smash for these subgenres or just a smash in general.

Taking place in an alternate version of the 1980s in a miscellaneous European country that totally isn’t Britain, Not For Broadcast sees you thrust into the position of the editor for the National Nightly News…even though just moment ago, you were the janitor, suddenly having to fill in. And what a night to begin, as it happens to be the evening after a major election where a radical new party, Advance, has won in a landslide. It only gets more eventful as time moves forward, with the nation gradually heading towards a dystopia. And here you are, with the power to control what shows up on the airwaves, accident or otherwise. 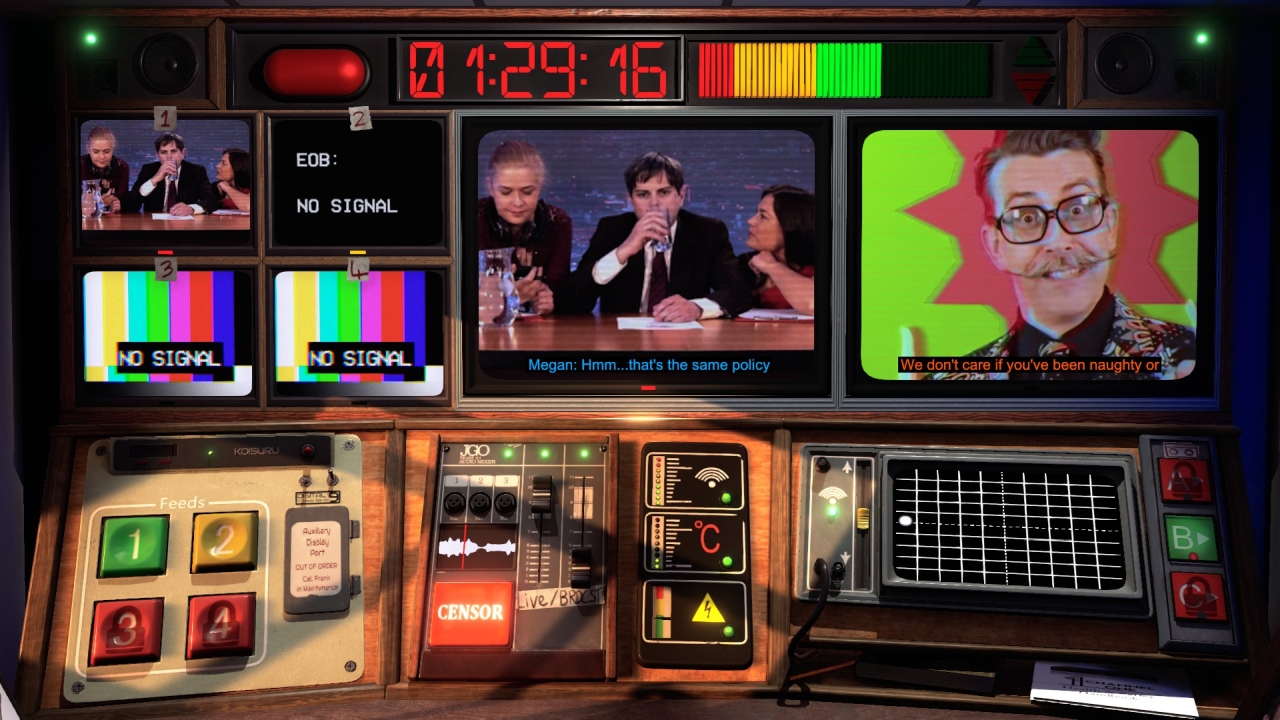 Gameplay-wise, Not For Broadcast has been heavily compared to Papers, Please by several, but I would actually say it’s a mix of that and Five Nights at Freddy’s. True, much like Papers, Please, the main premise revolves around having to make tricky choices within a limited amount of time, trying to earn money while under the eye of an ominous government. But the gameplay requires you to keep a careful eye on what’s happening with a set of monitors, switching around them at the right times and trying to balance several other things going on with your control panel, including a mini-game or two some instances where you have to look around the room. That would be where Five Nights at Freddy’s kicks in a little. It’s a bit of an odd mash-up, but so far it works extremely well.

Actually, to best describe the experience, I suppose I should summarize the first three chapters currently available. It begins simple enough, flip on the power, load the video cassettes containing advertisements, flip to the initial monitor with the broadcast to prepare for when the current program ends. But then the news begins, and we’re already given our first test of timing, making sure the intro gets cued just as the newscaster’s introduction ends. And if that wasn’t enough, we have interference to watch out for, which means you have to move a slider in the corner in order to make sure a dot avoids it, guide it through a side-scroller containing obstacles. Thankfully, you can use the scroll wheel on the mouse to control it, making things easier.

Then we have an interview segment with an actor and this is where things get interesting in Not For Broadcast. Now you have to test out your proper editing skills, making sure that you’re good enough to keep the ratings in the green. You have four cameras to select from, each showing different angles. Typically, you’ll want to keep the camera on whoever is talking, but keep it on them too long and things get dull. So you have to switch to either the occasional reaction shot or a wide shot in order to keep it interesting, and you have to figure out based on body language and speech cues when the best time to flip the camera is. It’s trickier than you’d think, but provides a rewarding challenge. 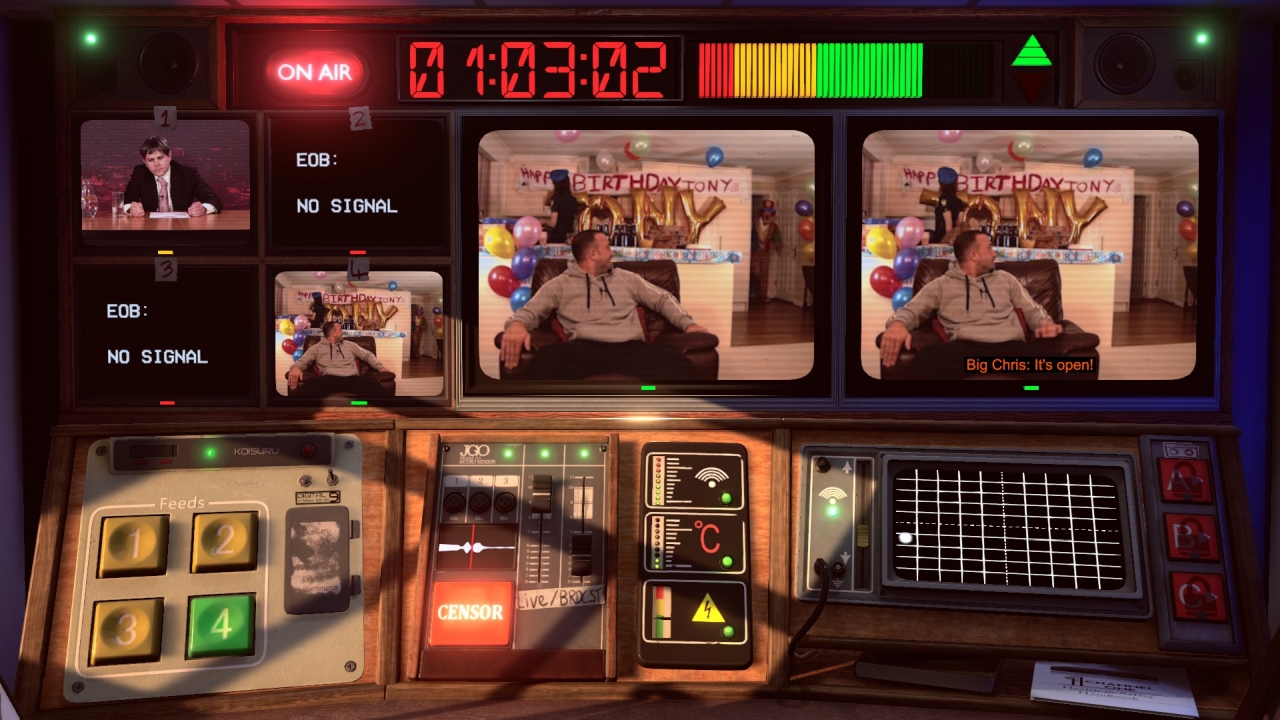 Unfortunately, our actor friend slips up and drops an f-bomb, and thus this introduces us to the censor button. There’s a two-second delay, thankfully, and once a swear occurs, you have to to either listen for it on the live broadcast or watch the noise levels for red areas as they scroll by, holding down the censor button for as long as necessary. And when we go live to coverage of the acceptance speech from advance, it turns out one of the two heads is a former TV personality who’s throwing down several drinks and thus happens to have a bit of a sailor’s mouth. So now in between juggling the cameras, we have to watch for naughty words. And thus ends our first day at work!

The second chapter is where our ability to influence the broadcast kicks in more, though. Our broadcast now kicks off with initial headlines and we have to choose what images accompany them, thus giving us the power to suggest how the audience views certain subjects. For example, a new CEO is announced and we can go with a file photo of them standing proud at graduation…or one of them going wild at a craps table. We can decide to show a picture of Advance’s leaders smiling, or looking sternly. Simple stuff, but effective. Of course, you can also cut to any behind the scenes footage if you think more important secrets are being spilled that people should know about, but I haven’t found anything there…yet.

We begin with an in-station interview about the current state of the government where one person is blatantly plugging their book and the other is blatantly lying through their teeth, and then we have more live interviews concerning the state of crime that focus more on humor, like a preacher with twisted secrets in their closet that spill out (quite literally) and a former convict celebrating with a raucous party. In those sections, the main focus is on censorship and avoiding interference, with a few proper camera cuts.

The bigger challenge comes when a youth act is proud is proud to share their new anti-bullying play with us, which they can perform now thanks to a grant from Advance. It is…hilariously bad, to say the least. But aside from the fact that we now have four people to manage when it comes to the cameras, along with them moving around, suddenly a rhythm section kicks in! Yes, the play has a musical number and you get bonuses in your pay if you time any cuts in cue with the music. Definitely a fun twist! Finally, I decided to end the night by playing a toy ad that a post-it note questions the safety of, but eh, I fail to see how bad things can get. 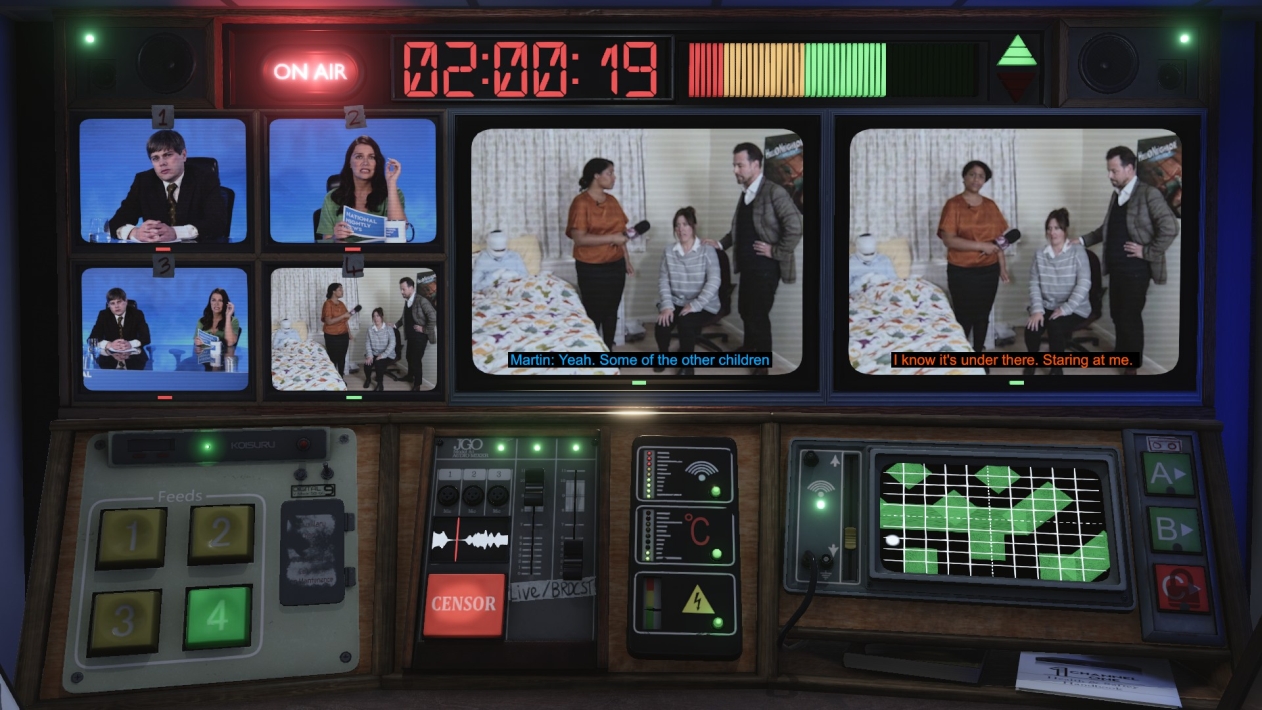 The third chapter now takes place several months later, when the effects of Advance are starting to be felt and a resistance group is rising. Oh, and, uh, it turns out that toy whose commercial I aired burst into several fires and seemingly killed thousands…and we have to broadcast an interview with a kid injured by one, then the network has to issue an apology, so…whoopsie? Also, National Nightly News now has two hosts, with our co-host being a the former culture reporter. There’s a story going on the background concerning the hosts, and as we get peeks of it, it feels intriguing.

We then go to live coverage of a Sportsboard game, the latest sporting craze to sweep the nation, and…you know, words might not be able to do this one justice. Instead, let me just praise Nor For Broadcast in getting the right actors, tone and odd rules that contribute to the general hilarity. It’s something you should see for yourself. But alas, our coverage is interrupted by a group of nudists staging a protest, and now we have to use proper camera cuts to try and edit around them, anticipating where they’ll move next, lest their private pop up and damage the ratings. Again, nicely funny and some challenging stuff, but wouldn’t ratings go up if people learned that topless people were suddenly on the air? Eh, whatever, best not to think too much there.

There are bigger problems that have popped up, though. See, with a raging storm going on outside that’s affecting the station, now some of our buttons have become electrified! And during an interview with Advance’s leaders again, to boot! And while you can stand a few shocks, too many in a short amount of time kills you. So now there’s that, camera cuts, interference and swear words to watch out for. Oh, and making sure the advertisements get played at the right times, and oh crap, the buttons for them have locked up and the tapes have popped out. I was able to get an advert off at the end, ending the final chapter for now, with a trailer of things to come later. 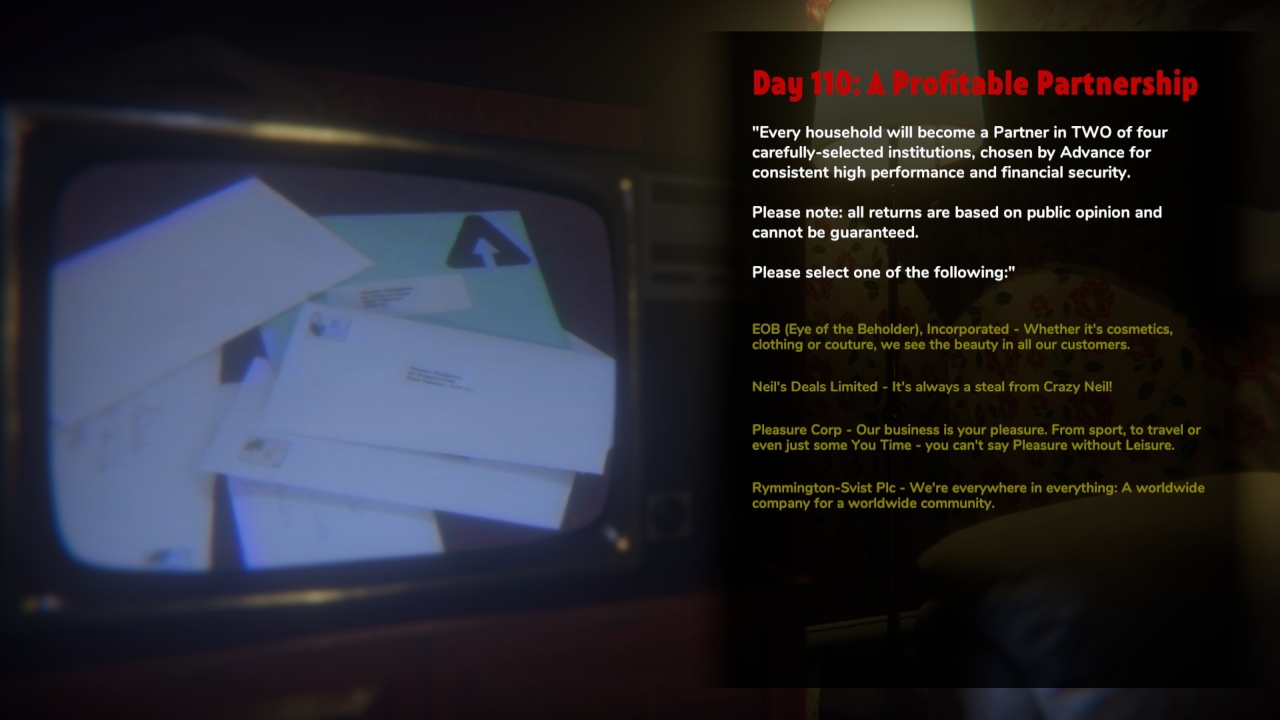 That’s all probably a lot to take in, but NotGames have done a spectacular job at fitting in so many different mechanics, all while making sure that you’re able to juggle them easily and yet still be challenged properly. I didn’t mention the text section between broadcasts, though. And this is because…well, this early on, they have yet to make much of an impact. You go home, interact with your family, make choices like whether or not you can give your passport to a family member, and get more story concerning Advance’s rise. But unlike in Papers, Please, we have yet to see any real relation between these sections and Not For Broadcast’s core gameplay. There is a moment where you select business to invest in, meaning it now pays to use their advertisements for extra money, but that happens before the third chapter ends.

For that matter, money doesn’t play a big role at the moment. You can purchase upgrades for your equipment or cosmetics in between broadcasts, but only one of these instances is active right now, meaning you can’t do much. And on a final note, the developers were smart enough to give players Access to archives, where they can view past broadcasts, footage they may have missed, and more…but there are no fast forward, rewind or pause buttons right now, meaning entire segments have to be watched over again. Thankfully, this issue will be fixed in a future update.

Not For Broadcast won’t be out for a while, with the developers estimating that it’ll be in Early Access for eighteen months before a full release. But there’s a reason why it’s already achieved a rating of “Overwhelmingly Positive” on Steam. The gameplay is a fresh spin on an existing formula, throwing several curve balls at players as well while still keeping things fair. The humor is top-notch and the visuals perfectly capture ’80s cheese in a subtle way. This could easily be an even bigger hit as development continues, so here’s hoping the National Nightly News has even more glorious insanity and satire to share with us soon.