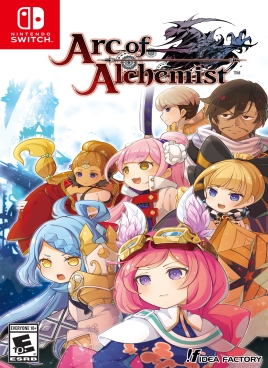 The industry has seen many action-centric JRPGs come and go over the years. Many struggle to find a sense of identity, like Sword Art Online, while others like the Neptunia series stick to a tried and true formula and branch out when needed. Arc of Alchemist takes a familiar chibi-anime style with exaggerated features and strange proportions and fuses it onto a single-player team-centric action RPG with a post-apocalyptic setting. The latter has been done a lot — but with the popularity of Mad Max: Fury Road, it has led to the setting becoming a big thing again just like it was when the original series led to countless copycats. In Arc, the world has been taken over by giant robots known as Machine Dolls. Bands of people have formed to try and topple the machines and find the legendary Great Power that can save humanity — but no one has done so yet.

Quinn and her merry band of misfits set out to do just that. She’s versatile on the field and excels at not only combat, but also puzzle-solving in the overworld area. The world itself takes more of the focus for the plot than characters often do, although they are fleshed out when you’re at your base of operations. There, you can not only change equipment up and revamp your gear, but also learn more about everyone and their roles in one another’s lives. It’s a nice change of pace and offers up a mix of not only tactical strategy when it comes to gear, but also a touch of a visual novel as you go through the characters’ dialogue options and learn what makes them tick.

The core combat is action-centric with a blend of melee and long-range attacks. Each character has their own preferences, with some excelling at short-range weapons while others prefer things like magic to get the job done from afar. You can also mix things up by switching out your weapons — so if you want to take Quinn from a short-range character and make her a longer-range one, you can. Your party alongside two others will be given pre-assigned combats before battle. This allows you to try a few different things out in various areas and see what works best. If going all-out with long-range attacks doesn’t let you get things done in clutch situations, then mixing things up a bit may be in order. 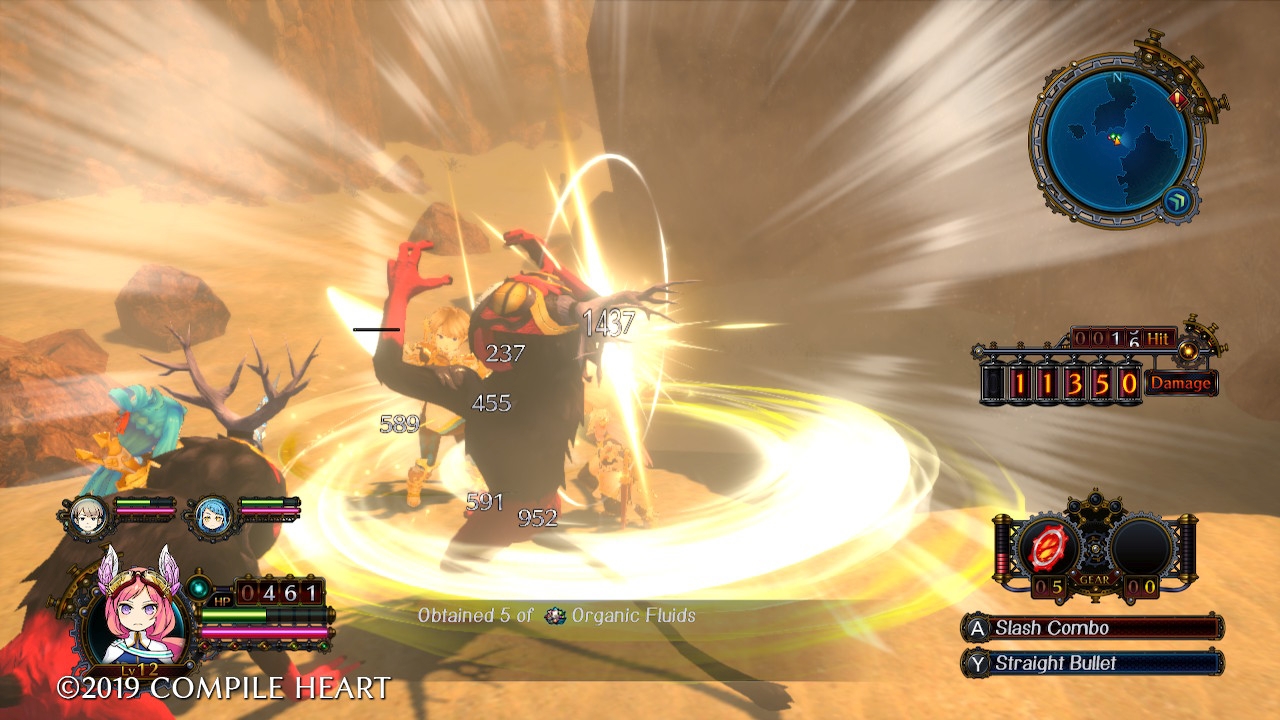 The flow of combat is quick and feels good overall. Attacks are spread out over Y and A on Switch or square and circle on PS4 which did initially seem odd until spending time with it. By having the core combat buttons side-by-side, you can change your tactics up a bit. The game also has a bit of jumping thrown in to help avoid attacks and that’s something you don’t see a lot in action-centric RPGs like this. You also have to keep track of the various elemental weaknesses enemies have thanks to Quinn’s Lunagear. This allows her to control fire, water, wind and earth to help the group. You can use fire to burn down a bush, for example, while earth can bring about a rock slab and protect your team from damage. As time goes on, you’ll be able to combine elements together and take down some of the toughest foes. This single tool makes the gameplay a lot more diverse than other games of its ilk.

The gameplay loop, however, does have a rote formula to it. You’ll go from A to B, topple all foes in your wake, go to base and chat a bit, revamp the party and do all of that again. While the core action is fun, it can get old during longer play sessions. Playing for about an hour at a time is ideal, as going for 2+ hour long sessions led to fatigue setting in and the formula becoming readily apparent. Fortunately, the formula is still fun — it’s just a bit limited in overall variety no matter how many times you switch up your attack patterns.

Thankfully, everything is enjoyable enough to make it worth the repetition. The overarching story about bringing civilization back from under the thumb of the machines is a cool one to see unfold too. It isn’t the most compelling tale ever told in a game, but for an action-centric RPG with wacky character designs, the serious stuff in the story does actually come across pretty well and can be taken seriously. Otherwise, the comedy and the drama would all just blend together and thankfully, that isn’t the case. 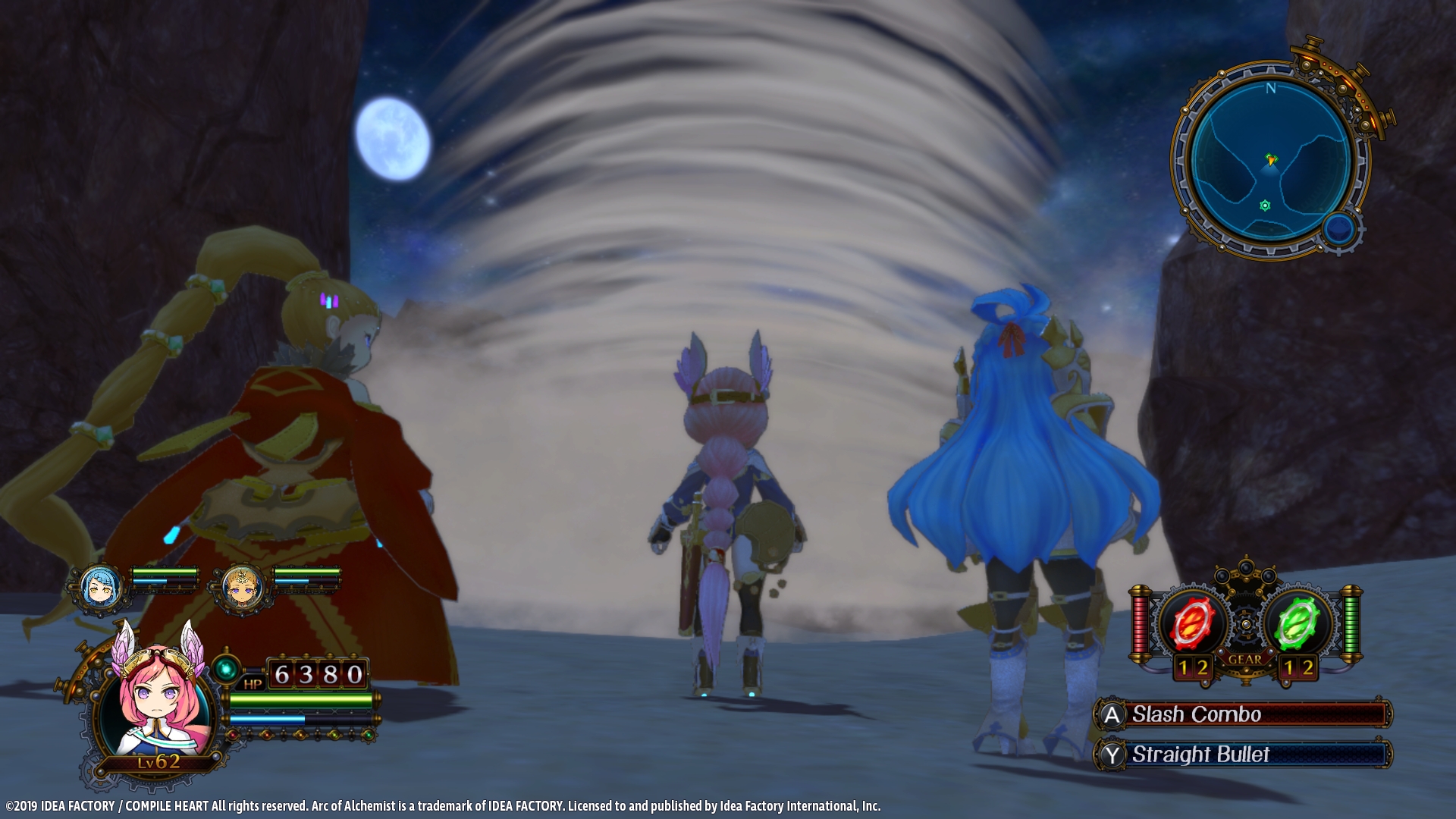 Visually, Arc of Alchemist looks great when it comes to character models, but falls apart with environments. Everything looks like a slightly higher-resolution PS Vita game, with character models that don’t emote, but do stick out thanks to vivid facial expressions being drawn on. Character animation is limited, but part of that is due to the chibi nature of the designs limiting how much you can do for limb movement. It doesn’t cripple the game, but does hurt the ability to care about the plot’s stakes as you’re staring at these action figure-esque characters. The biggest upside of the limited animation is that it does allow the pace of battles to be kept brisk.

Environments are the game’s worst-looking element. Everything has a muddy appearance to it — whether it’s a wall, the ground or any kind of flat surface. It’s a shame, too, because when playing you can tell what they envisioned — but the tech used for the game just can’t quite make it a reality. It reminds me a lot of Xenoblade Chronicles on the Wii where you have this game that overcomes visual flaws to deliver the goods — but also makes you pine for a remake later on that would live up to what you feel the creators wanted it to look like in their mind’s eye.

Luckily, while the game may not be a looker at all times, it is great to hear. The soundtrack gets your blood pumping from the second it starts with a rousing anime-style opening video package complete with bombastic pop. As the adventure goes on, you get more pop mixed in with a bit of rock and some somber music when needed. The Japanese voice work features large subtitles that aren’t just great for TV playback, but look good even on the go with the Switch in portable mode or with a Switch Lite. 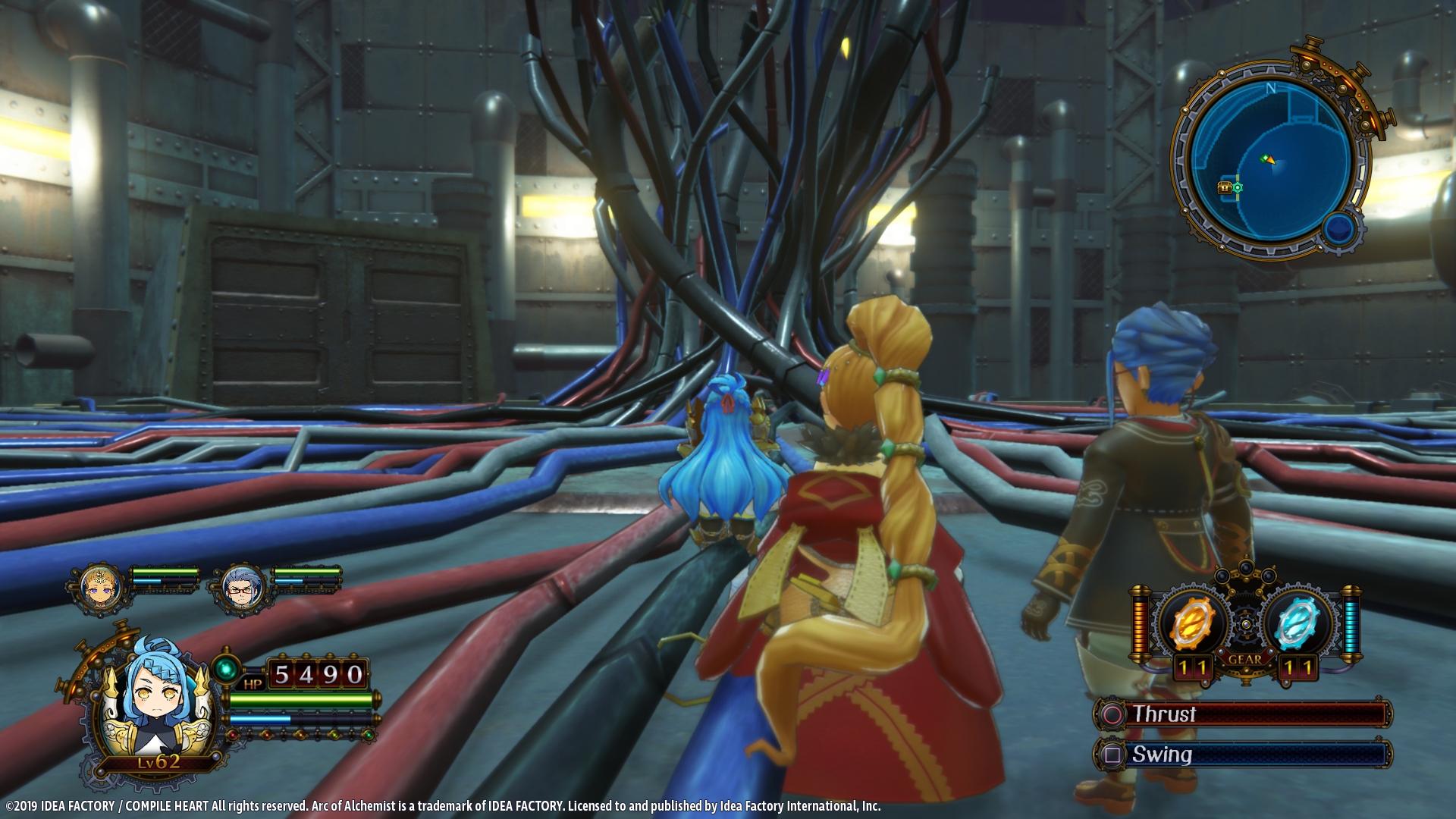 Arc of Alchemist is a flawed, but fun experience. The action RPG mechanics are rewarding and make tough battles even more thrilling to win, while the overall gameplay loop needs a bit more variety. Luckily, the story is interesting enough to make the repetition worth it as you find more about the world and how it has shaped everyone you encounter. It isn’t the best-looking game in the world and suffers from muddy textures, but does sound great with a top-notch soundtrack and impressive voiceover work.