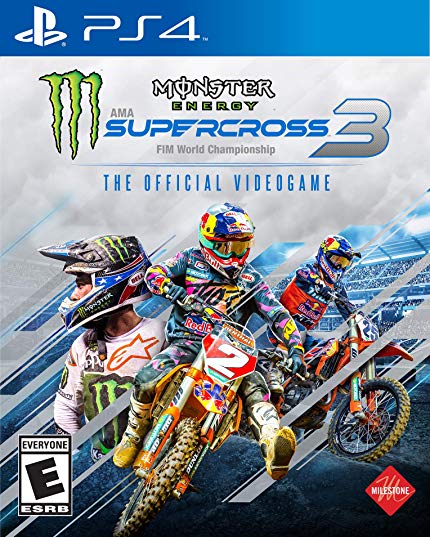 Monster Energy Supercross is arguably the most exciting form of motorsport. The battles are intense with a list of talented riders and many risks that all amount to naturally-made drama. Three years ago, Milestone entered the fold to try and replicate this exciting sport in video game form. Its third release, Monster Energy Supercross: The Official Videogame 3 looks to put everything together to make a gaming experience that matches what the sport of Supercross does. With some issues in the past with the game, the team at Milestone continues to aim to build the franchise going forward. Is this the year where it all comes together?

Players can expect all the riders and teams that they are familiar with from the Monster Energy Supercross series. The new season of Supercross started about a month ago, however, and Milestone continues to be in some sort of licensing loop as the game offers the 2019 tracks, track layouts and riders. This does cover the three classes: 450SX, 250SX East and 250SX West. Thankfully, there isn’t a huge shakeup in the rider lineup this year besides fan favorite Marvin Musquin still being in the game as he’s sidelined with a knee injury for the 2020 season. It may be worth it to release an updated lineup and track layout for the 2020 season later in the year, but there may be some contractual obligation as to why this continues to happen.

The second year of this gaming franchise introduced some big modes including the Compound and and a deeper track creation tool. Along with these two things and the 2019 Championship and a Career Mode, there still remains plenty of options to play in Monster Energy Supercross 3. The Compound receives the biggest change this year as it features an entirely new facility. The focus of the Compound is to ride in a free roam area and to practice your riding skills. Players can take part in individual racing events to help earn XP for their profile. The location is set in the legendary Supercross Test Area in California, which is basically a construction site. The idea of riding dirt bikes at large construction facility is almost any rider’s dream and is the perfect addition to the game. The size of the Compound is bigger and includes much better flow to it than last year’s. Players can also invite their friends and ride in the area cooperatively which is a nice touch. 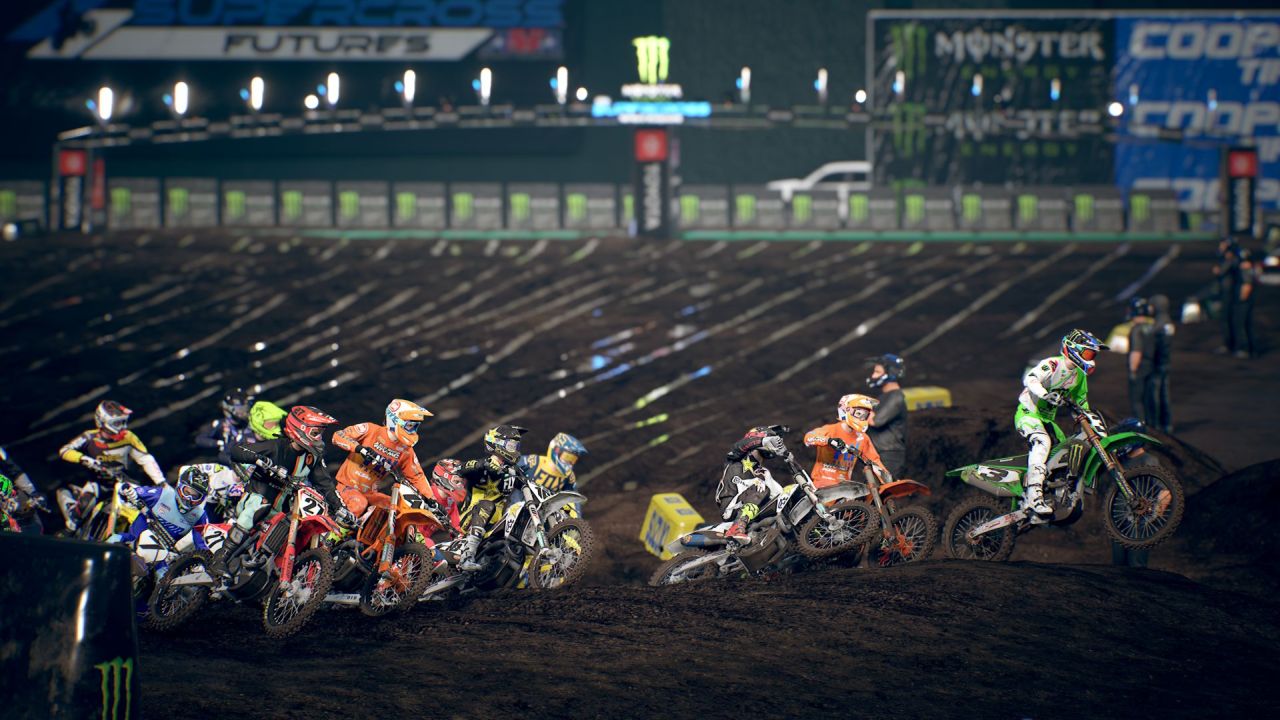 As for the Career Mode, everything basically carries over to this version from the previous. Players will start off in either 250SX East or West and this is determined by a test race against AI opponents at the Compound. The difference this year is players can choose their sponsors and decide to join an already-established team. There will be contractual obligations as you work your way to the top class of 450SX. Milestone has also added the ability to create female riders this year which was much needed. Many female riders exist in real life so this is certainly an important addition. The Career Mode still comes down to grinding for customization gear, but there’s a lot of it in the game from brand-name manufacturers. Depending on the team you decide to race with, you may not be able to edit some of your gear which is kind of strange. The Track Editor still allows for an easy way to create a track layout, test it and share it with the community. This still adds a good bit of replayability to the game. These can also be downloaded and raced online with other players.

Milestone already has a solid foundation in terms of game modes, so the team wanted to focus on the multiplayer aspect this year. Monster Energy Supercross 3 now offers a lobby system and more importantly, dedicated servers. It’s safe to say that the gameplay online is the most consistent it has ever been. I ran a multitude of online races and some with full rooms and experienced no disconnections and witnessed no lag. While the tech is there to support a good racing experience, it’s overall a streamlined experience. You have to wait for races to finish to change any type of options and you cannot exit to the lobby. Milestone has included some mini-games to broaden the online experience some, but most people that create lobbies just want to race. There is a Race Director mode that has been added for those that want to create videos of races. This also allows for private lobbies to get a longer experience on tape. These are some much-needed changes that should open the door for more gameplay options down the road. 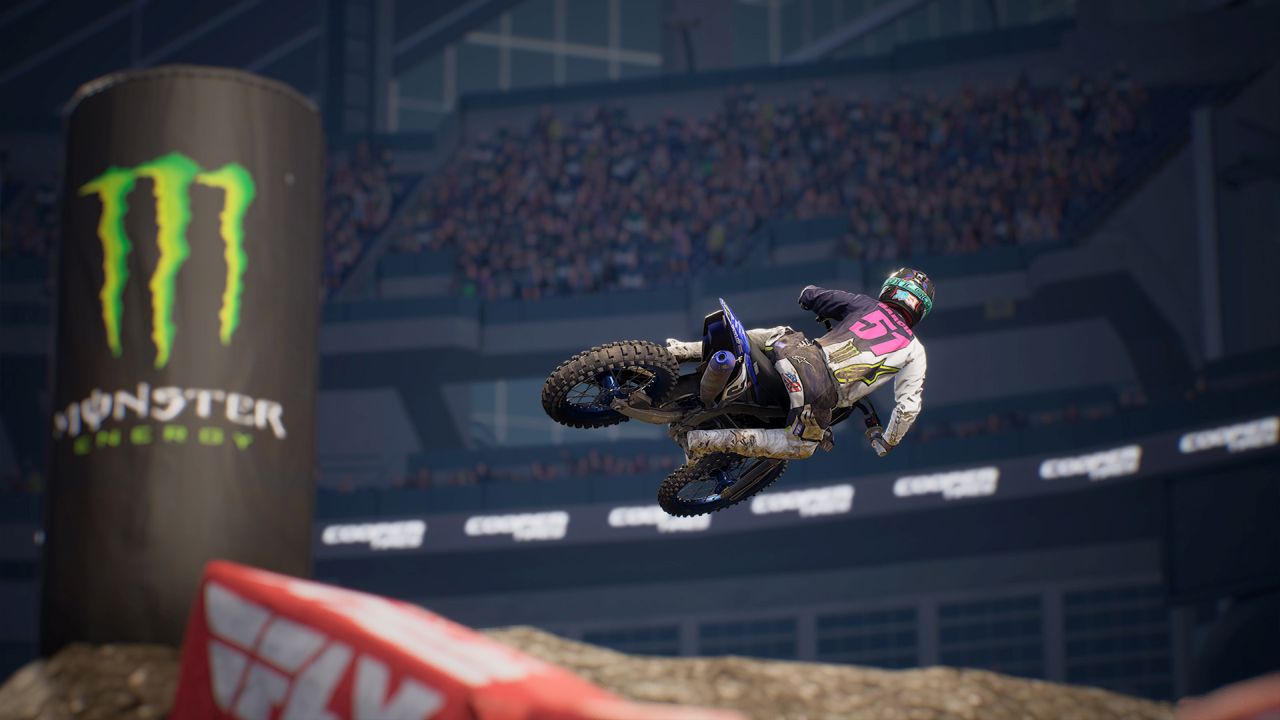 The actual gameplay, at its peak, is probably the best the series has had. Supercross is a sport of momentum and rhythm and it sits at those extremes in terms of riding. Players can now adjust their weight in the air, which helps with landings. Scrubs can be performed which are designed to limit air time, but these are very touchy. My biggest issue with the gameplay and controls this year is the level of confidence that comes from the lack of consistency of the ride. The physics can still be awkward but the game feels great when things go right. This usually hits well with long stretches of fast rhythm sections that allow the rider to get speed coming off of an embankment from a corner. Hitting foam barriers either amounts to nothing or amounts to throwing your rider fifty feet. The wrecks in the game are over-the-top and they don’t look or feel that great.

Attempting to do smaller-scale maneuvers often amounts to oversteering and having to counter steer. It takes a ton of practice to not only learn the bike, but also the track itself. One tiny hiccup can throw off your momentum and the AI will eat you alive no matter what difficulty level its on. The other grind is just to get good and the game can shine when you can avoid the need for the smaller maneuvers It would be nice to have the scrub option mapped to L1-R1 rather than the left and right sticks. Players also need to control the handlebars with the left stick and adjust the weight with the right stick. Even with standard physics and not going the advanced option, the learning curve to be competitive is steep. The game features a tutorial mode, but it doesn’t showcase what you need to do to succeed. Players need to know how to approach corners and when to feather the throttle when getting out. The bike will still take off on you if you nail the throttle when coming out of a corner. It can be a frustrating experience and it’s up to the player to learn this on their own. The game still contains a flow guide to help with landing jumps, but a corner guide is much needed so inexperienced players know the breaking points and how fast to enter the corner. Right now, the game is geared for the hardcore fan of the series. 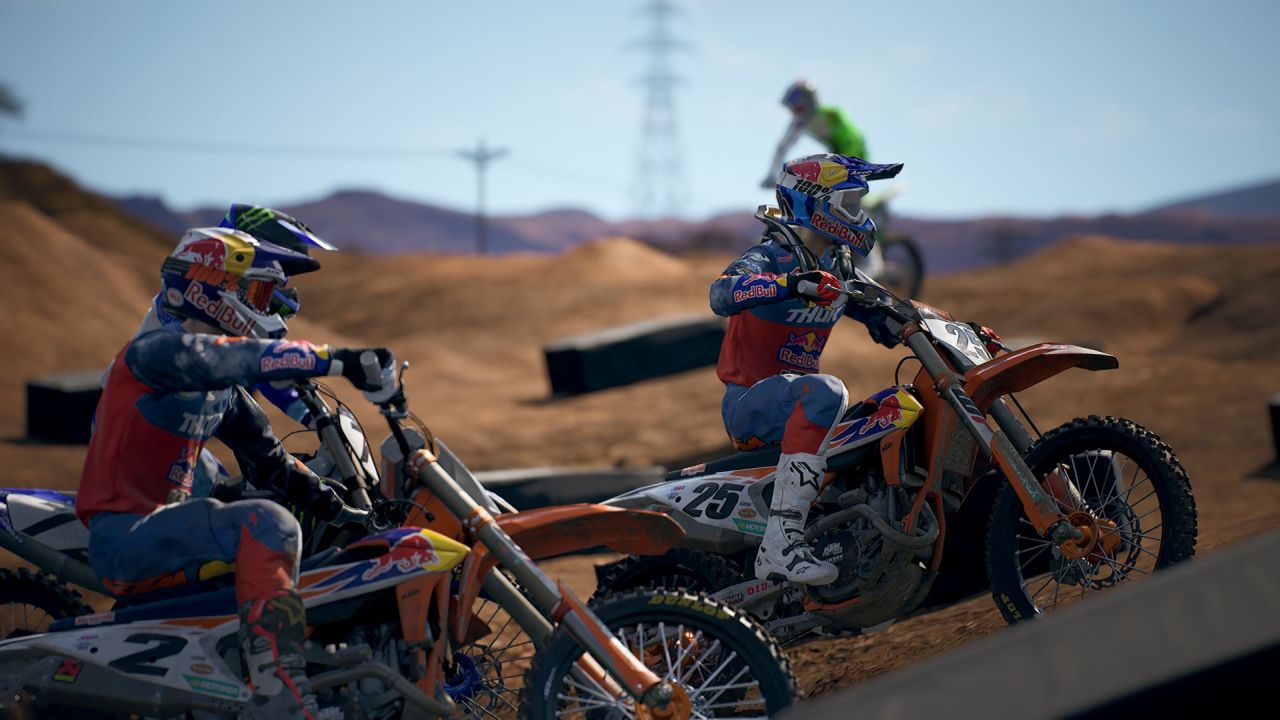 The other half of the experience is the AI and these guys are still more frustrating than ever. Rarely will you win a hole shot, which is the initial drag race to the first corner to start the race. This becomes a mess and I understand this can be utter chaos in the real world. Most of the time, it feels like a tidal wave is pushing you outwards and the AI will heavily wreck every time. AI riders inconsistently fade off after a wreck or stay put causing you to run over the bike and subsequently throwing you fifty feet. The camera angle in third-person will cause issues when the AI decides to ride right up on your tail and block your vision. This can be and issue when you’re trying to identify jumps. The AI should be attempting to pass you, not run you over. There has also been times where I was dive-bombed by the AI going into a corner. Side-by-side racing is what makes the sport exciting and most of the time it seems the AI doesn’t know you’re there. Besides some accidents, the AI never seems to mess up or misjudge jumps and the top two riders tend to pull far away. It’s almost better playing with others online.

Rider contact is still utterly atrocious. There have been some animations added to make up for that but the collisions are bland and most of the time you’re left on the ground while the AI takes off. It just doesn’t feel right. The issue still exists where a rider will land on you or vice versa. Sometimes it takes you out and other times it doesn’t. This type of thing is a rarity in the real sport and it hurts the immersion. The accidents still happen way too fast to really experience an incident. Of course, you can use the rewind option when things don’t go your way and most likely you’ll be using this a lot if you’re new to the game. 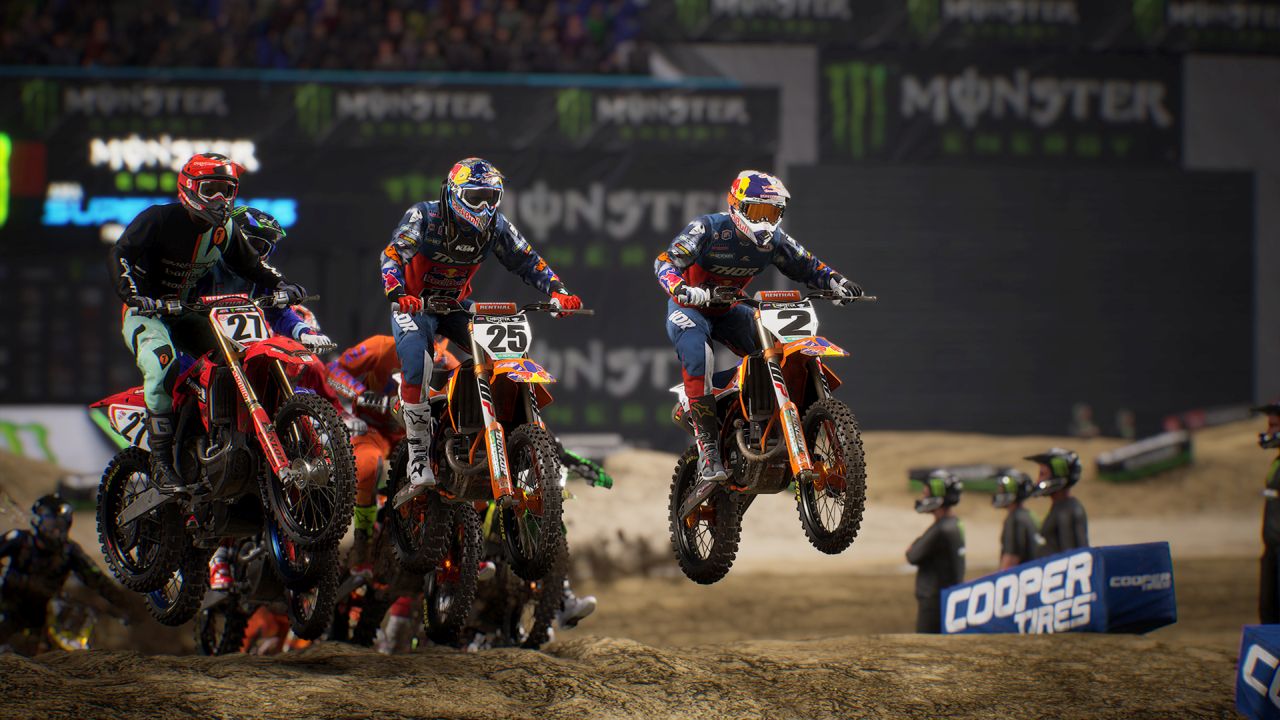 One thing that Milestone has excelled at since day one with this franchise is the visual atmosphere. Lighting has been improved this year and it’s safe to say that MEC3 is the best-looking entry the series has seen. Reflections look great ranging from the dirt to the bikes. Stadiums are replicated nicely and the player models and faces are improved but still look weird. There are some new cut scenes prior to each race, but these do quickly get old. Fireworks and pyros are brighter than ever and the overall colors pop this year. The game runs silky smooth and environments look even better with rain effects. There are still some objects that look dated but Milestone has made the most of this Unreal Engine they are using for this.

Dirt bikes aren’t necessarily the best-sounding things, but Milestone made sure to make a difference. Each bike manufacturer sounds different and even more so when breaking down each class. There’s a noticeable tone between each bike. Adding to that atmosphere is a reactive audience when a pass for the lead or a big moment is made. The crowd gets loud and when the riding is going good is when the game hits its peak. Ralph Sheheen and Ricky Carmichael return to do limited commentating and you’ll hear Sheheen at the end of the race over a PA. It would be nice if somehow they could get more involved because it would only add to that atmosphere. As for the music, it’s lively early but quickly gets repetitive. 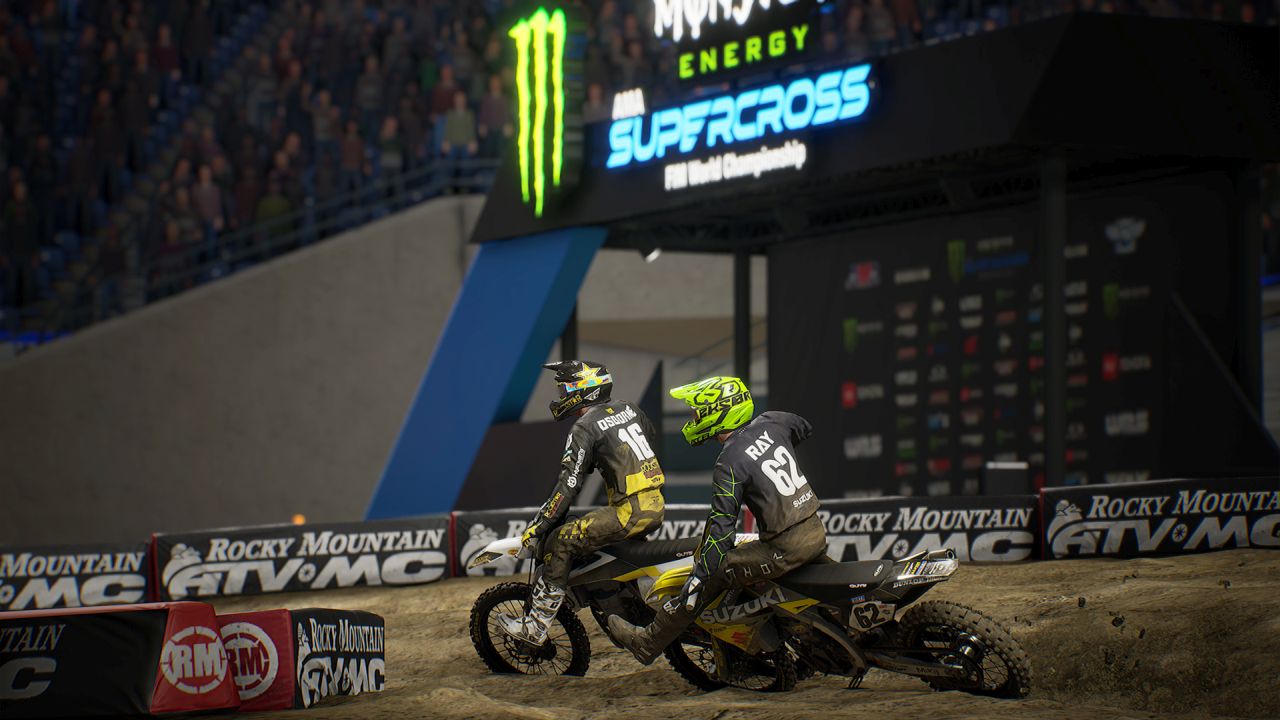 While Monster Energy Supercross – The Official Videogame 3 might be the series’ best version, there’s still a long way to go. Hardcore fans of the series will enjoy this the most, but the learning curve is steep for those new to the series or to Supercross in general. The confidence level for riding will take some time to reach to pull off jumps and corners, but there’s a good payoff when you get to that point. The Compound offers a big change and in a positive way while other modes get some boosts as well. The online experience is much improved thanks to its dedicated servers and some mini games. Colors pop on the screen and the atmosphere of a Supercross race is still replicated well. Milestone needs to implement the tools to make the game more accessible.