Usually when a game tells me, “you are not special, you will die,” I take it as a challenge to succeed under harsh circumstances. There are a plethora of titles that make it a point to be punishing and unforgiving on purpose. It’s a format of gaming that forces players to become highly acquainted with a game’s mechanics, layout, resources and more to succeed. Stoneshard, from developer Ink Stains Games, is looking to challenge players in a harsh, dark fantasy world where they work as a mercenary taking on contracts. The title is currently available for Early Access on Steam and has plenty to explore, but does suffer from some unpolished mechanics that have proven more frustrating than challenging.

What Stoneshard gets right is its attention to details. It’s a gorgeously-designed pixelated RPG with an open area map that begs exploration. Players have the option of playing through a prologue that teaches the basics of Stoneshard, assuming the role of the main protagonist escaping from a dungeon of vampire opponents. The title does a great job of introducing players to the turn-based combat at the center of Stoneshard. Players can specialize their characters and choose from various classes to experiment with over a hundred abilities. From skill trees to equipment management, Stoneshard requires a tactical mind when engaging with enemies. To elevate combat and gameplay, survival mechanics like health systems and psyche must also be monitored. It’s a title that requires attention to all components — having to think about the durability of gear or if there’s enough medicine to tend wounds. 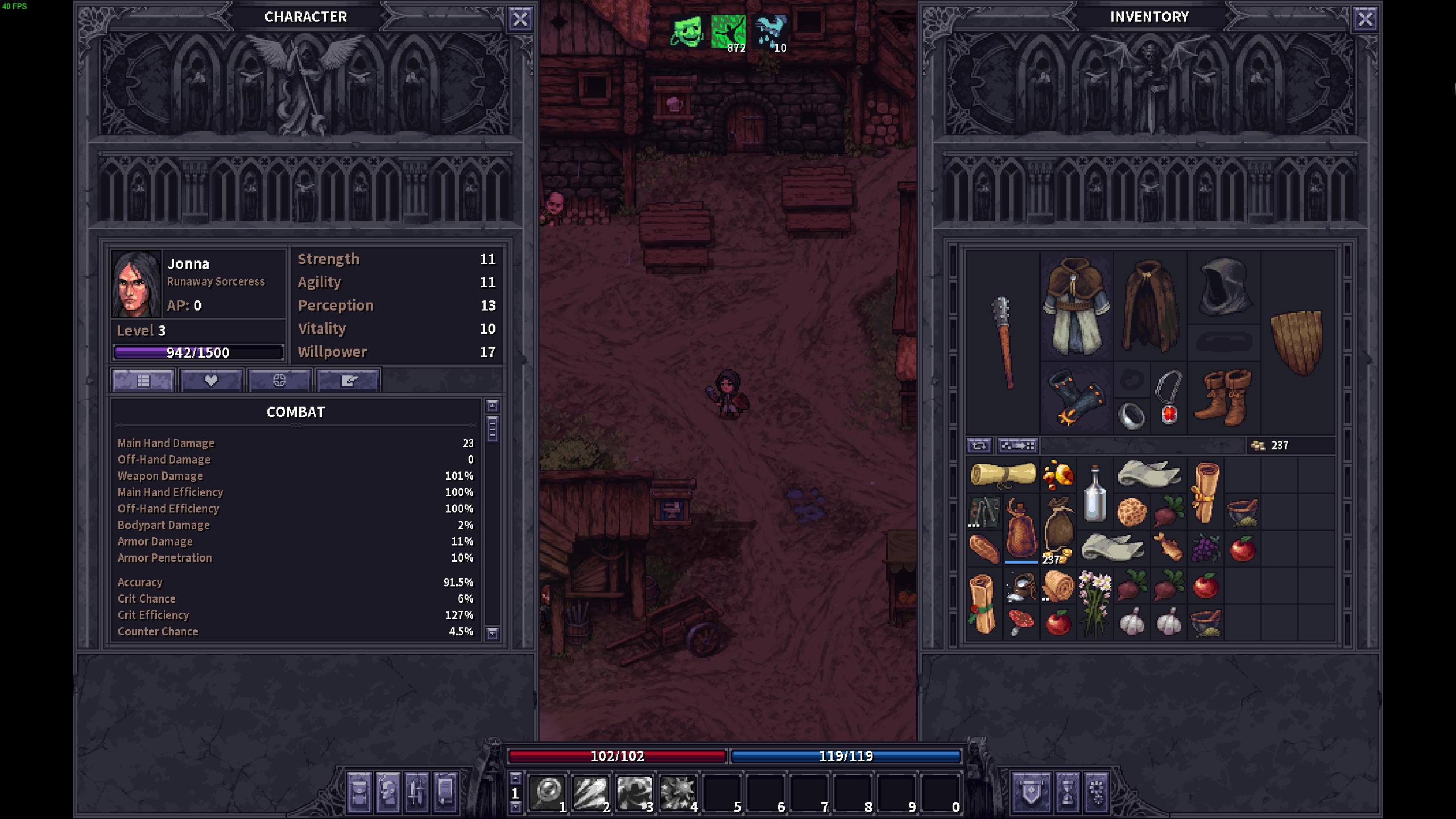 Stoneshard‘s health system is deep yet simple. Health conditions can have positive and negative effects on combat abilities. Characters will even feel pain that can cause a lack of health regeneration or ability. It takes a little bit to understand how herbs and potions may work together to heal wounds. When not in dungeons, traversing Stoneshard’s world does become a vastly different game about survival that plays directly into combat. On the way to fulfill contracts, you may come across an ambush of thieves or a pack of wolves that may need to be put down. These intricate systems work well together to create addictive gameplay that keeps you coming back for more.

After finishing the prologue, it’s discovered that the protagonist is searching for magical stoneshards all over the world. As he explains his story to a tavern patron, you are then prompted to pick from some preset characters. Despite taking time to learn the protagonist and level him up, the title starts you with a fresh slate regardless. Because of Early Access, character creation is not available just yet, but it does remain a promising addition to the final product. Picking a pyromancer felt like I could achieve a good balance between ranged fire attacks and area of effects. I equipped her with a mace and shield to give her more of a battlemage build and felt comfortable with the loadout. After finding a few spell books, I was able to open up skill trees for maces, shields and even geomancy. I found a comfortable balance between burning enemies, fortifying myself with a rock skin and smashing enemies with a mace. Being able to mix and match skills from various trees give Stoneshard an important freedom of choice that players may look for in an RPG. 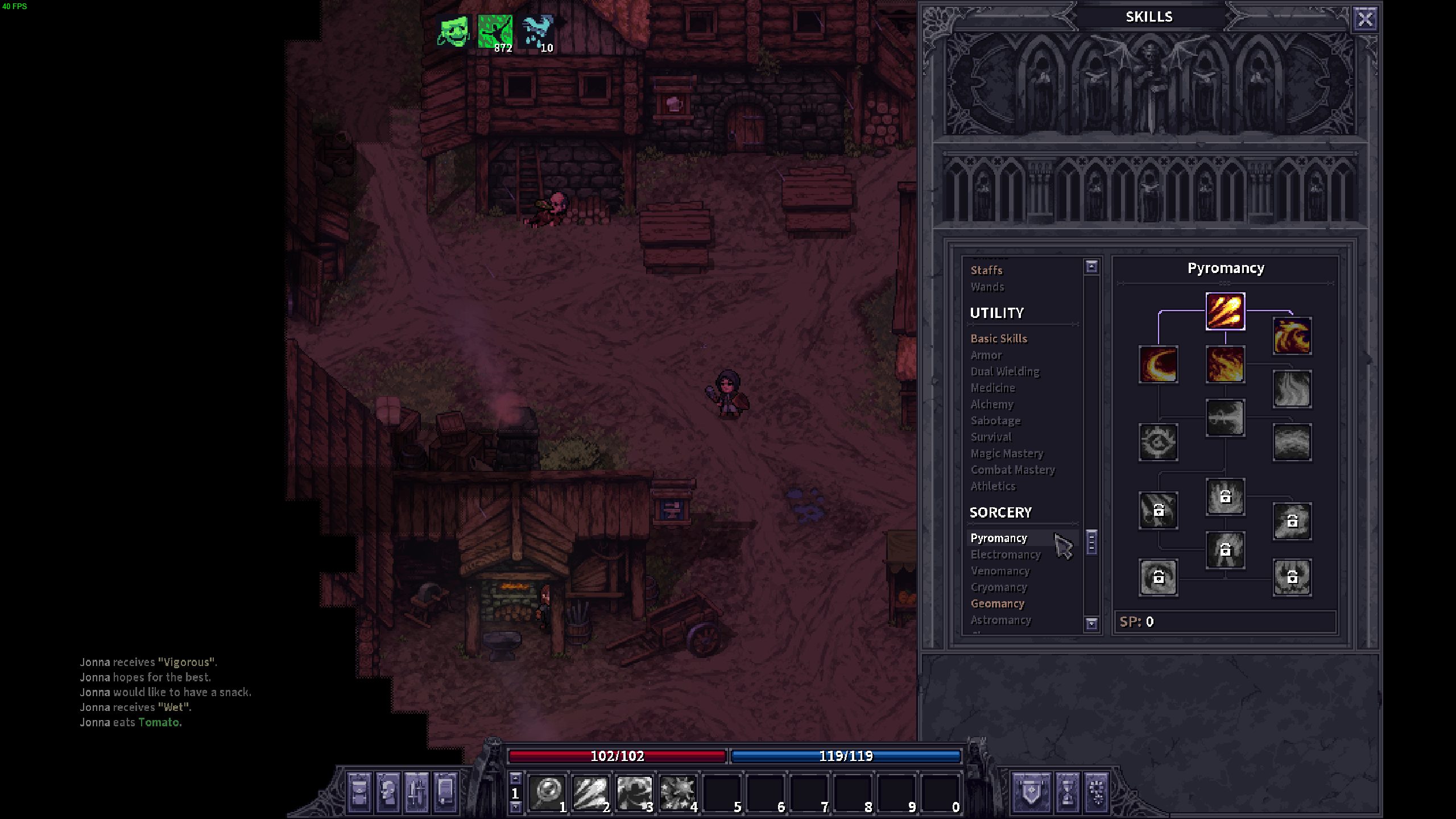 Where Stoneshard does have a lot of freedom, it also feels constrained by gameplay imbalances. It’s one thing to properly balance a game to create a challenging experience, but Stoneshard unfortunately wastes players time more than anything else. With twenty hours of gameplay under my belt, I can say that more than half of the time was redoing quests. Stoneshard’s biggest weakness is that it doesn’t respect players’ time enough to create safety mechanics. For example, we can only save when we sleep. We can either pay money at an inn for a bed or find an abandoned camp out in the wild with a sleeping area. This means that we can put hours of time into a run, die from a quest and have to start all over again.  It’s been awhile since I felt as much rage as I did when I spent a long time fighting my way through a dungeon, beat it, then die from a snake bite on my way to collect the reward. There’s no way to quicksave, there are no fast travel options and it leaves players at the mercy of overly-punishing mechanics.

It may not even seem like a big deal if combat were more fine-tuned. The game cautions us that we are not “heroes” and that we are simply ordinary people living in a hostile world. This can even be felt if one becomes too adventurous and attempts to take on a whole pack of wolves or den of bandits at once. Because fighting more than two enemies at a time is pushing your limits, regardless of class combat plays out the same way: take some pop shots, run away, finish off one enemy, rest in between fighting. You have the ability to enter “rest” mode after engaging with enemies as a way to replenish health and mana. Resting causes time to lapse, however, meaning that hunger and thirst can be accumulated which then causes players to go through food and water in no time at all. Combat then becomes less about tactics and more about picking enemies off one by one just to be able to regenerate enough to continue. Most enemies feel balanced, but early levels leave players squishy to the point of failing quests that are considered average. I even spent time outside of quests to level up, but even leveling feels unbalanced. I can clear an entire dungeon of enemies, but that wasn’t enough to get me to level four. I can’t say that I’ve rage quit in awhile, but after spending a lot of time defeating a whole den of vampires with the kiting strategy and then dying from hunger on my way back to collect my reward, I found myself turning off the game in disappointment. 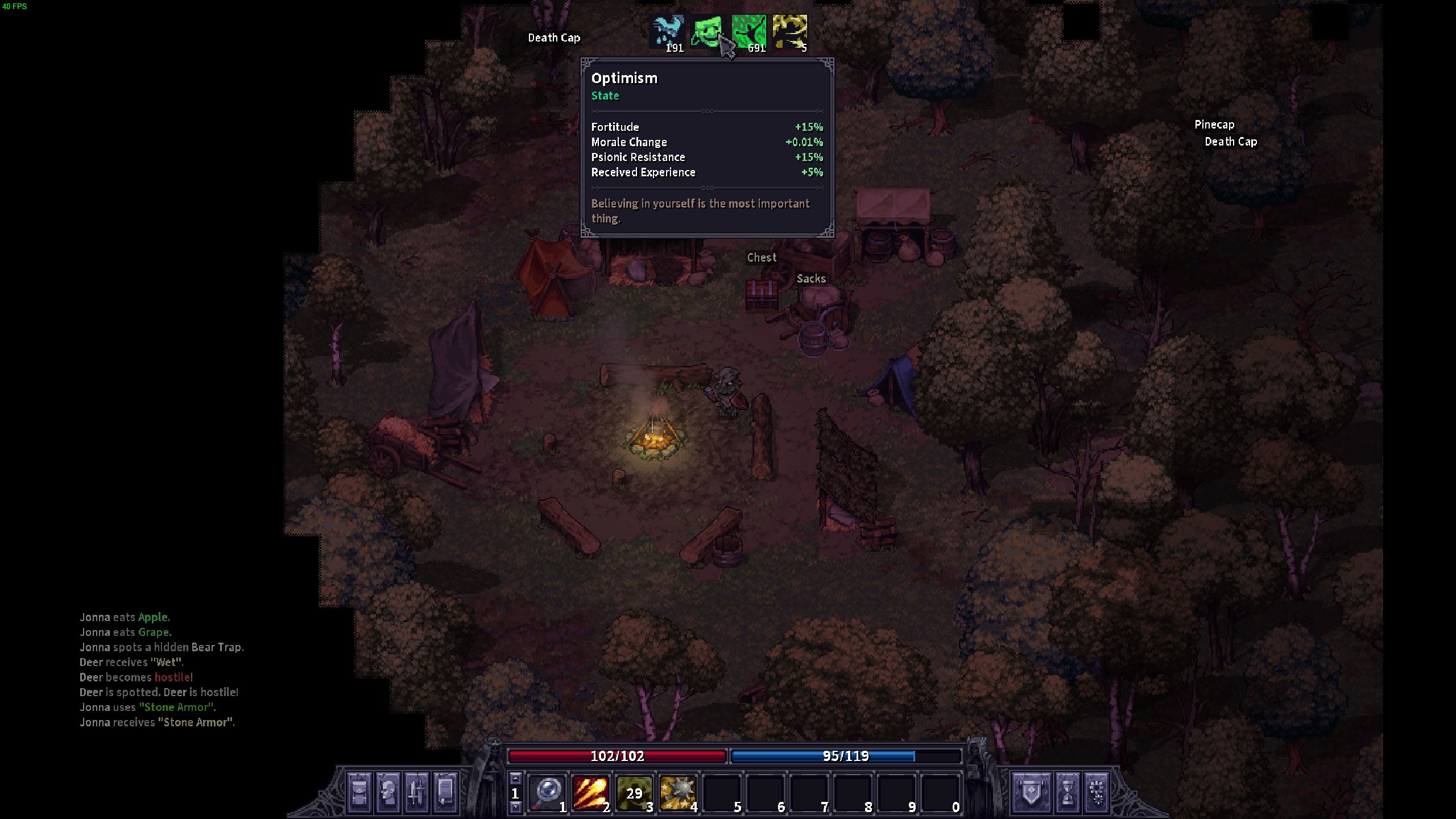 Stoneshard is a title that does have fun in it, you just need to dig a little. Despite all my rage, I still found myself drawn to the title. Whether because I wanted to succeed out of spite or because I am a glutton for punishment, who knows. It’s an ambitious title that is geared for major development updates in the near future and beyond. I appreciate the build choices available to us and I even appreciate the idea of a survival health system. Where Stoneshard falters is in its respect of the player. It needs some kind of safety net for the average player. Yes, there is permadeath for hardcore players, but I’m suggesting quality of life updates. Either make it so that players can save more actively by sitting at campsites or utilize some kind of fast travel system to cut down on the amount of wasted time (maybe create a “bedroll” that can be purchased from merchants as a quick save option). It’s no longer about a challenge when there’s too much downtime in a game, it’s about avoiding the inconveniences. Stoneshard has great lore and ideas about character upkeep, but requires way more balance at the moment. While there isn’t a lot to do once we finish the main quests, it’s a title that may have more to offer players once developer updates are set in motion. Stoneshard is currently available for Steam, with new updates coming in March.