When trying to find a reason not to take this month’s Pocket Power selection from the pile of terrible GBA games acquired from the clearance bin of a used record store, tragedy was averted when I remembered the Turbo Express was a thing. Technically, this device opened up the entire library of TurboGrafx-16 games to being considered handheld titles. Thanks to the miracle of the loophole, this month we’ll take a look at Air Zonk in celebration of the impending release of the TurboGrafx-16 Mini.

The character design for Zonk is similar to giving Bonk a Poochie style makeover but without the insufferable results. Zonk looks a lot like Bonk except he has a little lightning bolt on his forehead for a quasi mohawk and wears sunglasses, which is what everyone with an attitude wore in 1992. He’s also a cyborg and can fly so there’s enough going on to differentiate him from the little caveman but it’s hard to deny family resemblance. A few of Bonk’s foes are present such as King Drool, so it’s safe to say Bonk and Zonk take place in the same universe, and with the family resemblance it’s plausible Bonk’s descendants mated with toasters which led to the eventual birth of the cyborg Zonk several generations later.

Once we look past the shared universe and art style, Air Zonk and the Bonk’s Adventure could not differ more in actual gameplay. Air Zonk is a horizontally-scrolling spaceship shooter, similar to R-Type or Gradius whereas Bonk was more akin to a traditional Mario game. With the obvious link between between the two franchises it seems like a strange move to go in such a different direction with the type of game but it paid off as Air Zonk is perhaps the most memorable shooter from the NEC console’s library. 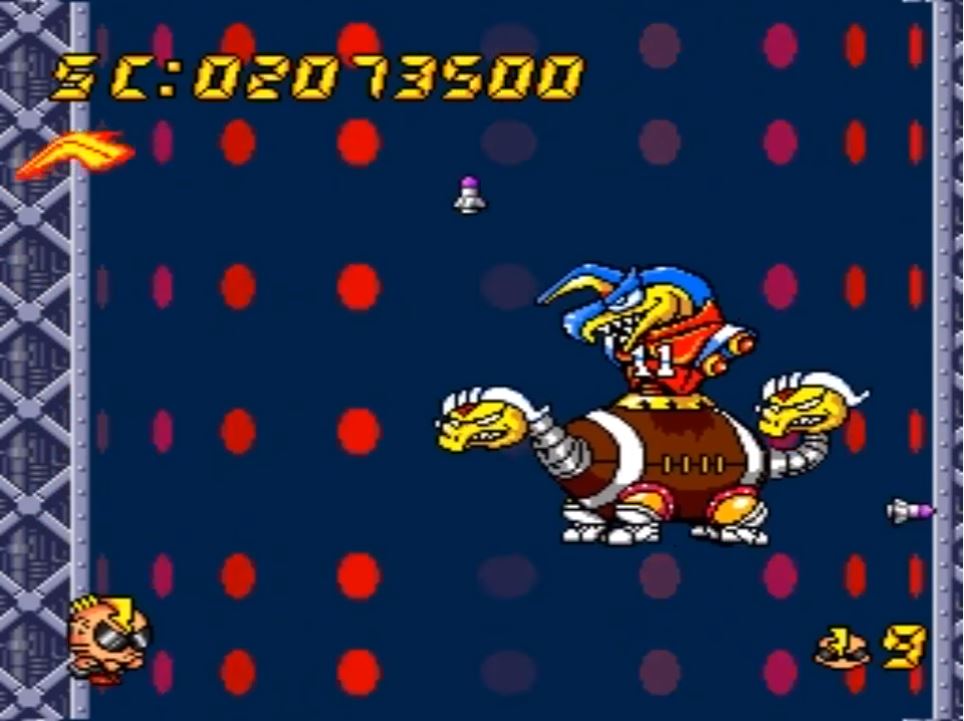 Air Zonk has arguably the cutest cyberpunk aesthetic of any video game. Most cyberpunk settings that automatically spring to mind are set in gritty dystopian futures but the brightly colored world of Air Zonk seems more in line Plok. The cartoonish design of environments and characters give the game a lighthearted feel in contrast with the intense arcade shooter gameplay. The enemies, particularly the bosses, have interesting and unique designs though sometimes it’s not always clear what the bizarre form is supposed to actually be. It ultimately doesn’t matter though, the general rule of playing Air Zonk is just shoot at every strange thing that’s trying to kill you.

At the start of each stage the player can select one of several friends to accompany Zonk through the level. These also have interesting and unusual designs. One of them appears to be an anthropomorphic gumball machine with sunglasses, top hat and a pipe. Another one appears to be a cross between and inflated blowfish and a cow. There’s many others, with one looking like a mummy with a drill on its head. I’m not sure what most of these are supposed to be but I do like the artistic style and they do contribute to Air Zonk’s unique style. 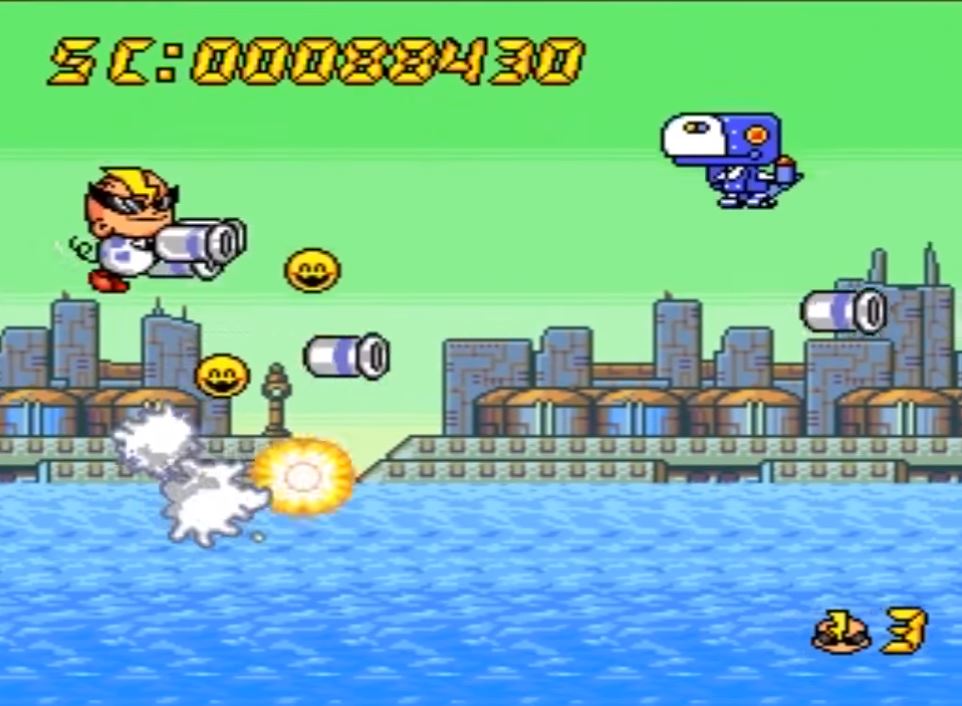 The basic function of each of these friends is to serve as a satellite, joining Zonk in the level and providing extra fire power. This isn’t much different than some of the power ups in Gradius but Air Zonk takes it to a new level and can merge with the friend, turning into some bizarre amalgamation of himself and the friend which also effects his attacks. Merging with the puffercow will cause Zonk to take on a more bovine appearance and his projectile attacks change from bullets into milk bottles. Air Zonk is from an era where games where short enough playing through multiple times wasn’t the time sink a lot of modern games are but witnessing each of the transformations is incentive enough to select each of the different friends.

Air Zonk has a wide and varied arsenal of weapons at his disposal. Flame jets, lasers and homing missiles are among the more expected forms of weaponry but there are some sillier weapons such as boxing gloves. There are only five levels in Air Zonk but this a case of quality over quantity. Each level is beautifully designed and long enough where it’s not a game that can be completed in twenty minutes. Each level is flying through open air but there are creative level designs that may even include nods to a certain related game starring a caveman. 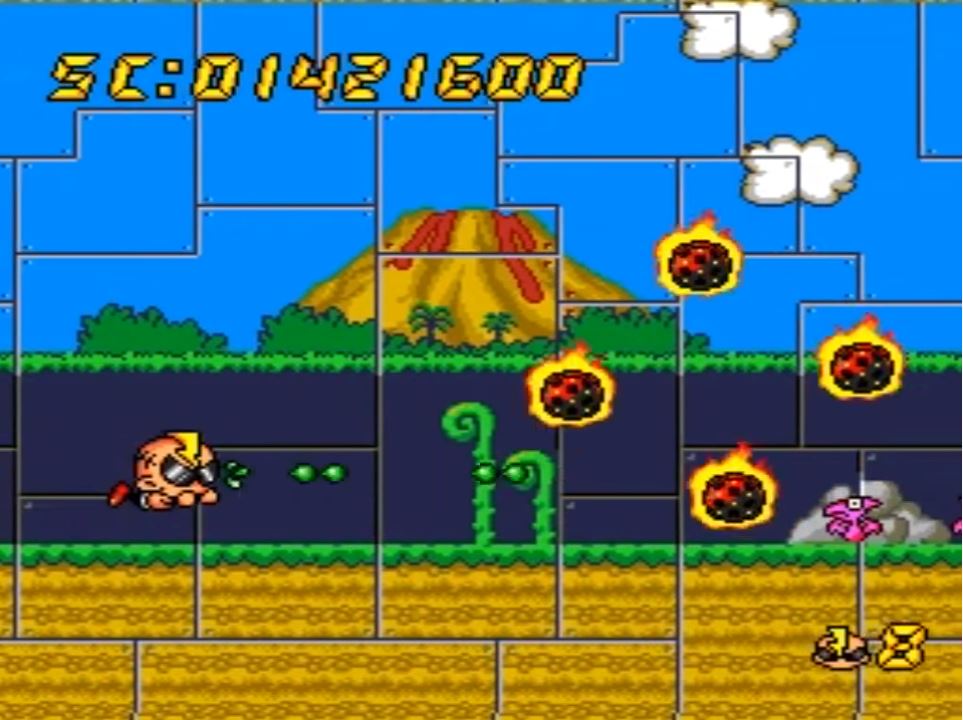 Air Zonk used an iconic game character as a basis and took everything in a completely different direction with surprisingly good results. The brightly-colored and lighthearted art direction is different than the more realistic sci-fi oriented stuff we see with this genre, but due to its high quality and originality it’s a breath of fresh air. A Turbo Express isn’t exactly cheap in the secondhand market, but for those who have access to one this is a shooter that is not to miss.