Final Fantasy XIV: Shadowbringers Patch 5.2 came with an incredible amount of content, from new gear to new dungeons. One of the biggest additions that players have been waiting for since Shadowbringers’ launch was even more raids. Well, it may have taken seven months, but we’ve finally got the second part of three raid tiers and with it comes even more re-imaginings of A Realm Reborn Primals. For the first fight of Eden’s Verse, Fulmination, we seen Ramuh remodeled with a trimmed beard and most importantly…wings. No, of course I’m talking about his lower half being the body of Ixion. That’s right, Ramuh is now a pterocentaur. This is a guide to how to take down the Savage version of this glistening Thunder God. 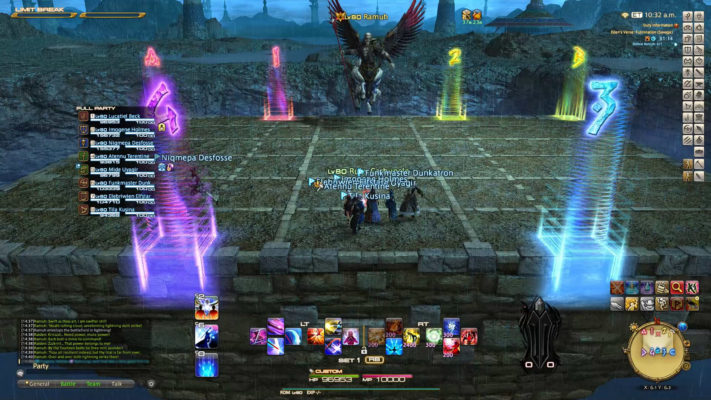 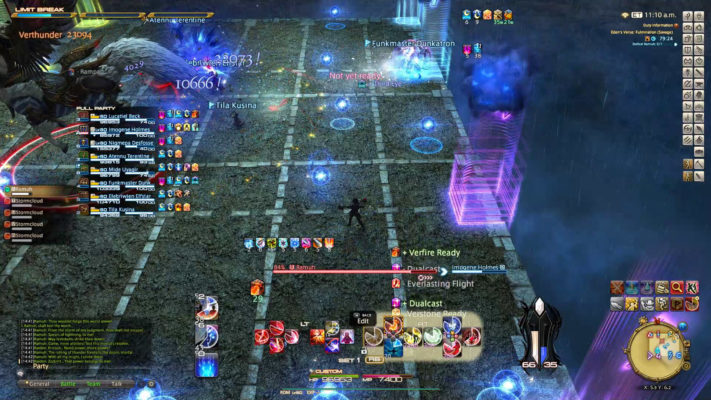 Stratospear Summons / Judgment Jolt – Ramuh will summon four spears on the four corners of the room. Simply identify which is the smallest spear (as it’s random) and run to its corner (you need to be right on the corner).

Orbs – Do not immediately get an orb, but you will need one soon.

Executor Summons – There will be an Add (Raiden) on the field tethering a player and dealing strong damage to them. Make sure the off-tank takes at least two orbs and has the most of the party. If someone takes as many or more orbs as the off-tank and moves through the tether, they will get leashed and a tankbuster will probably hit them in the next part. Off-tank must kite this head around without it touching them. Fortunately, for anyone it’s not tethered to, it won’t harm you if you touch it.

Fury’s Bolt – This will indicate whether or not you need to grab an orb. Ramuh will always cast this here, but there will be other portions of the fight when it’s random.

Judgment Volts – Raid-wide attack. The Fury’s Bolt has buffed it so it will hit harder and will kill anyone without an orb. Heal and mitigate as much as possible.

Shock Blast – If you did the Orb portion correctly and the off-tank had the tether and the most orbs, they will be targeted with a tankbuster.

Stormcloud Summons – If you looked at the Setup portion of the guide, you will need to assign buddies and their positions of 1-4. This attack will target the four furthest players from Ramuh with a purple indicator, and four players closest with another effect.

Levinforce – This is a large knockback attack. Either Surecast/Arms Length or position yourself so you’re not getting hit off the edge or into a cloud.

** Fury’s Bolt – This is where this attack becomes random. He might cast it, he might not. It will affect the upcoming attack. 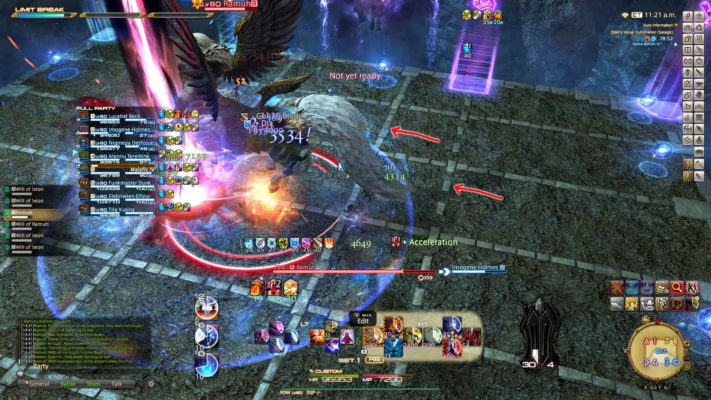 Tribunal Summons / Centaur’s Charge– Ramuh will summon horses with little room for error. You will need to place yourself in specific spots.

Either way, if you positioned yourself correctly, you will get knocked back to the far edge of the arena and avoid the horses rushing by.

Judgment Volts – Raid-wide attack. You won’t need an orb for this.

Thunderstorm – Spread out as Ramuh will begin to put down AOE attacks around the arena, along with give players a large AOE thunder attack around them four at a time. If you get hit by one of the puddles before getting hit by the main static attack around you, you are all but guaranteed to die. This can be a bit of a pain for casters, so time your spells wisely.

Executor Summons – This is the Raiden add once more. Make sure the off-tank picks up a couple orbs to gain its aggro and kite it around.

Stepped Leader – Right when Thunderstorm finishes, everyone should stack up on Ramuh’s butt to bait the next attack. Stepped Leader will be a delayed attack where every player will get a lightning strike. As soon as the cast bar finishes, scatter from your stacked position to avoid getting hit. 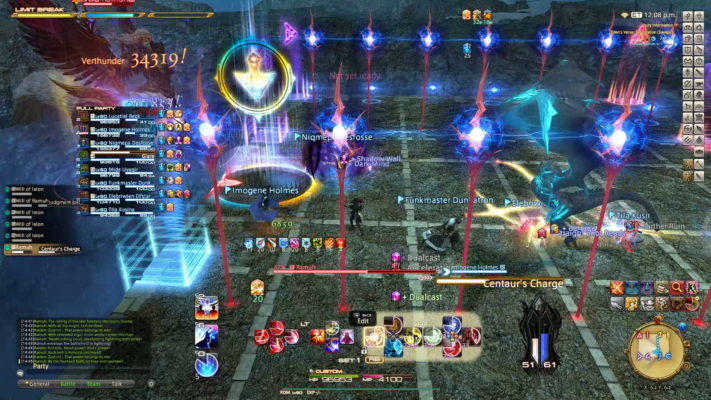 Fury’s Fourteen – The first real test of the fight. You will need an orb for this.

Stepped Leader – Because Ramuh has cast Fury’s Bolt, this will be an altered attack. Everyone still needs to stack (if you’re not fast enough, run far away and stand still once the cast is almost done). Instead of lightning attack on your position, this will cause a large doughnut lightning attack to hit all around you. Stacking will ensure everyone is in the safe zone. 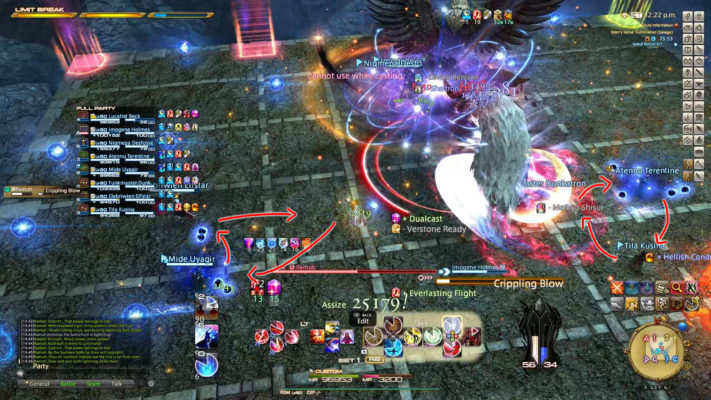 Chain Lightning – I  found this causes the most wipes for parties. As mentioned in the Setup section, you will need to assign a melee and a ranged to a healer. One party on the south-east and another on the south-west. Melee has it easy as they get to stand in place and wail on Ramuh. A healer will be targeted first, and you then pass it (by getting close) to your assigned range. The range will then move up to the melee and pass it to them. Finally, the healer will come up the melee and take the lightning back, and then you just repeat this a handful of times.

Judgment Volts – Raid-wide attack. You won’t need an orb for this, but healers be ready. Chain Lightning is still going off and can kill someone if not prepared. One death among the chain will cause a…well, chain reaction.

Executor Summons – Once more, Ramuh will summon the add to the field, so the off-tank needs to grab two or so orbs to gain aggro.

Thunderstorm – This is the same as the first Thunderstorm but with one important difference: there will be a Stepped Leader after the final lightning strike. Spread out and when the cast goes off, scatter and pray and try and avoid running into anyone else’s original path. 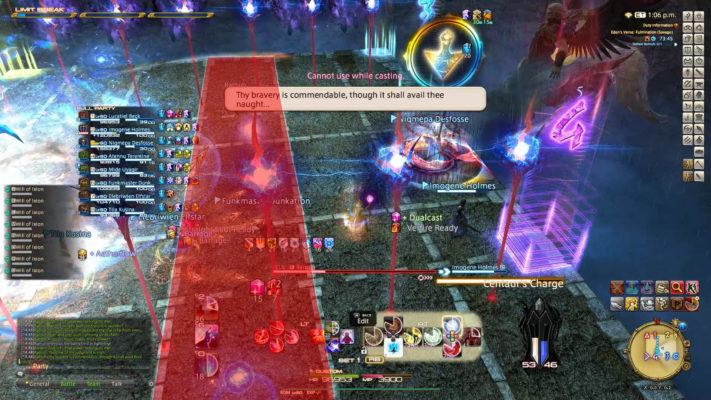 Fury’s Fourteen – Grab an orb. This is similar to the first one, but with one added detail.

Judgment Volts – Raid-wide attack. You need an orb for this or you will die.

Stormcloud Summons – Exactly the same as the first. Make sure the soakers get an orb.

Chain Lightning – Exactly the same as before.

Judgment Volts – Raid-wide attack. Be sure healers are on point here as Chain Lightning is still going off.

Stepped Leader – If Fury’s Bolt went off, stack and stay stacked. If it didn’t occur, stack and then scatter when the cast finishes. This comes fast, so immediately after chain lightning, it’s best to stack for this.

Judgment Volts – Raid-wide. You will need an orb or you will die.

Soft-Enrage – At this point, Ramuh will cast a bunch of Fury’s Bolts and Judgment Volts. You may as well grab an orb every time a Judgment Volts goes off as it will help reduce damage and they’re replenished each time.

Fury’s Fourteen / Judgment Jolt (ENRAGE) – This is the enrage. Ramuh will need to be at LEAST 7% health when Fury’s Fourteen begins casting, otherwise the enrage will go off. This is a long cast so push it as fast as you can.

Congratulations! You have now conquered the mighty Ramuh Ixion hybrid and are our your way to taking on the fiery duo in Furor. Be warned, it’s a little more difficult, but only because the final phase of the fight throws a lot at you. Regardless, enjoy the Book of Fulmination and accessories if you got them. You’re slowly inching your way up to iLevel 500!