The Prinny games on the PSP were some of the best side-scrolling platformers on the device and remain fun to this day. With the system’s natively widescreen aspect ratio, it makes bringing games out to more modern platforms much easier – and we’ll see that come to fruition when Prinny 1+2 Exploded and Reloaded hits the Switch this fall. The graphics have been revamped and the art looks much crisper – which should result in a better experience overall. Having this game not only on the go, but on a TV is wonderful as it really is something that plays well in short bursts – but does lend itself well towards longer play sessions when you get into hte groove. We’ll be keeping an aye on the game as its release draws closer.

The Just Deseerts Edition (available on the NIS America Store) offers up a ton of physical goodies alongside a cart. This edition gets you the game on a cartridge, a collector’s box, a slick-looking artbook designed after a scrapbok, a building block set, a post for Asagi Wars, and a soundtrack CD for Prinny 1+2. For $70, there’s a lot offered up here – and it’s a good value overall if you want the definitive edition of some of the best 2D platformers that never got the attention they deserved. 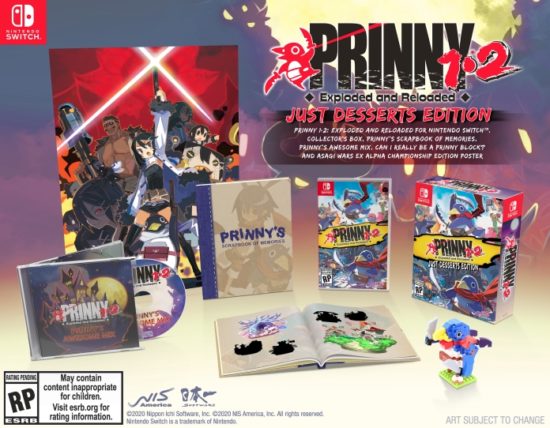