Action-based roguelikes are not exactly a genre you expect to see replicated in VR as accurately as possible. After all, it would be tough to pull off the type of combat as seen in games such as Dead Cells or ScourgeBringer without getting particularly crazy, even potentially heading into vomit-inducing areas. But notably, even in Early Access, Until You Fall seems to have been racking up an impressive amount of positive impressions for a VR hack-and-slash roguelike. It helps that this is coming from Schell Games, the developers behind other impressive VR games such as I Expect You To Die. And with Until You Fall, it looks like they can add another enjoyable accomplishment to their list.

Set in the ruined mythical land of Rokar, you play as a Rune Knight trying to cleanse the lands of the horrific spirits that have infested it after an unknown tragedy wiped nearly everything out. And Rokar is fully in synthwave territory now as well, as evidenced by the crystalline settings and abundance of neon colors, even on the mostly faceless, glowing spirits. It makes for truly impressive visuals, as well the opportunity for some amazing music and stories…even if I didn’t have the best opportunity to experience those aspects. 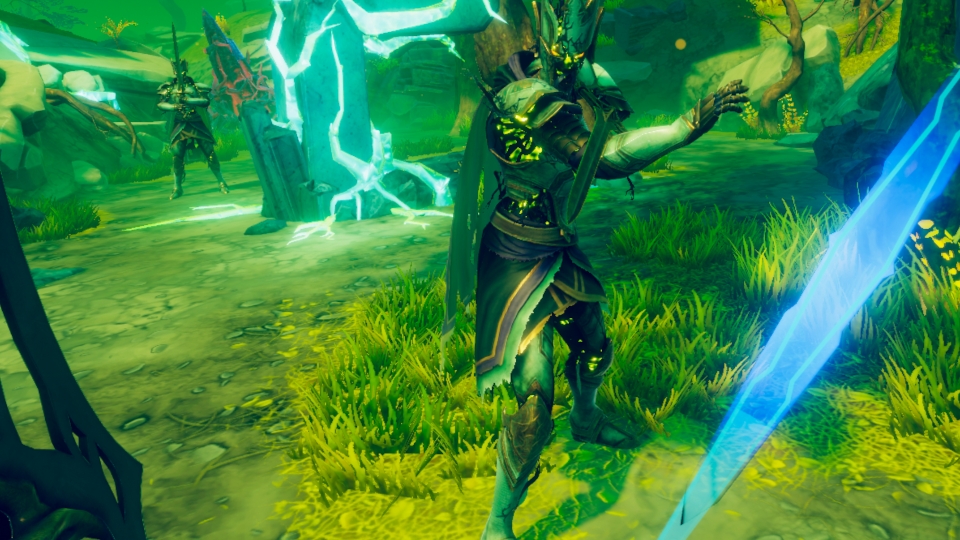 Yes, unfortunately, the demo shown at PAX East was using a version of the Oculus that had built-in speakers as opposed to more traditional headphones. And this may be something that provides a great experience in the comfort of your own home, but when you’re on an expo hall floor surrounded by several other booths playing video games and massive crowds of people, it means that the music and narration sadly tended to be drowned out quite a bit. But after doing my own quick research, I have indeed been able to confirm that the fast-paced, synth-filled soundtrack is an absolute delight, which appears to work perfectly with the gameplay and visuals.

Of course, the gameplay is still easily terrific enough to stand on its own. The setup is simple, having you press the triggers on each controller in order to wield your weapons, and either using the thumbstick to move around, or dashing forward at the push of a button. So the basics are easy to learn, and moving around is no issue, but what’s important is how combat fares. And as it turns out, it fares really well. Swordfighting is an area that VR can truly excel in given the right hands and Schell clearly have the exact hands needed. 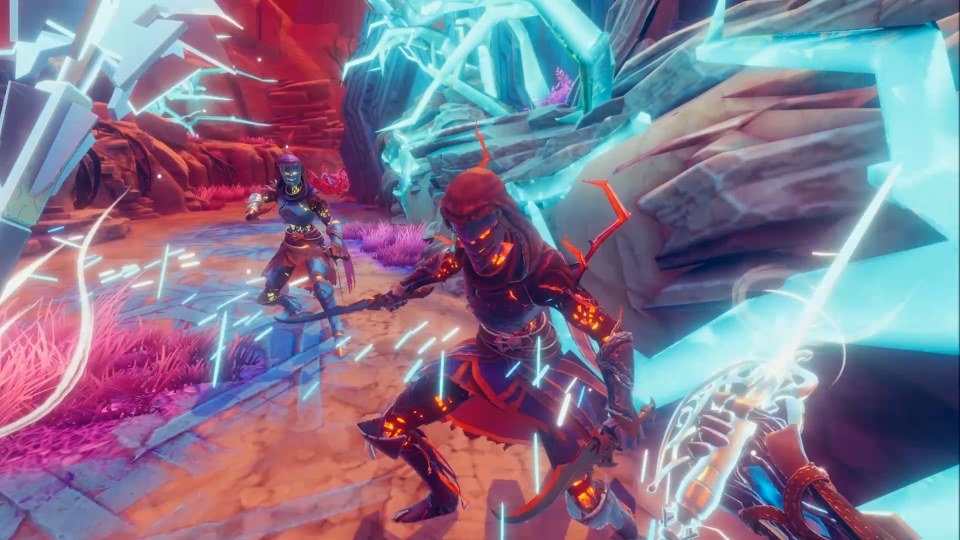 Simple yet elegant, swordplay in Until You Fall revolves around being able to properly master both offensive maneuvers where you strike your opponent, break their shields and deliver major blows when prompted by swinging across the right direction, and defensive maneuvers where you have to position your sword in just the right way when given a similar prompt, with a limited amount of time. So quick reflexes are clearly the key here, meaning the action is indeed able to match the quick intensity of similar hack-and-slash games. And this is especially true when having to deal with multiple enemies at once, requiring you to quickly pay attention to all your opponents and manage your attacks.

But really, what it all boils down to is just the absolute pure joy in being able to charge in, dash into an enemy, stun them for a moment, take them down with a flurry of strikes and then quickly turning around to block an attack before making short work of that pour soul as well. The weapons you wield have a perfect weight to them and it feels amazing to go to town on your foes with a successful set of combos. Of course, part of this could be me mainly preferring a more relentless approach, which backfired a bit when I got to the first major enemy, a massive knight that put up a tougher defense and required even more quick blocking maneuvers. Unsurprisingly, you will fall quite a bit here (it’s in the game’s title, after all) and this was where I got wiped out often.

In between levels, though, you have the ability to spend hard-earned aether on the likes of new weapons (each with their own super attacks) or get upgrades for existing ones. I decided to go with a massive axe for one hand and crest for the other one. This meant my hand with the crest couldn’t block, but the axe could now deal even more damage. Experimentation is encouraged here in order to find combos that suit you and this means going on multiple runs. Aside from randomized areas and enemies, the roguelike elements also have you choosing which perks you earn after each area, which means having to choose between the likes of health refills, combo boosts or more aether, adding another little essential bit of strategy.

Later challenges require you to accurately be able to lean to side in order to be able to dodge, making sure you work up even more of a sweat. I didn’t have any time to advance beyond that, but it felt like another cool technique to learn. Until You Fall is always able to keep you on your toes, giving you a lot to work with and encouraging you to try everything out in order to succeed. The spirit of action-packed roguelikes is alive here in every slash, and the VR approach provides something unique and fun. Truly, this is one challenging beast that does the genre proud and is worth checking out either now or when the full release arrives.