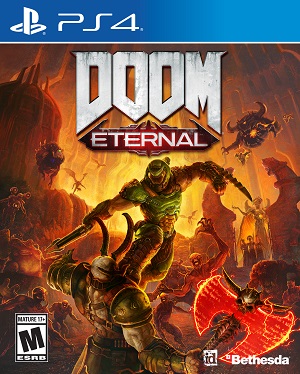 id Software did its franchise, Doom, proud in 2016. Despite a tumultuous development that led to numerous internal reboots and a complete shift in concept, Doom 2016 launched as a masterpiece. The game, at both times, captured the look and feel of the original games, all while forging a path forward on modern technology and design principles. That combination left players with a thoroughly satisfying romp through Mars and Hell. Now, four years later, id Software is back with a sequel, Doom Eternal. Having established a solid gameplay base, does Doom Eternal make slicing and dicing demons a satisfying romp or has it become just a chore?

Doom Eternal picks up two years after Doom 2016. Demonic forces have overrun Earth and killed 60% of the human population. The Doom Slayer returns to end the threat by killing the Hell Priests, three powerful beings working the Khan Maykr, who is intent on sacrificing the planet to save her own. With time running out, the Slayer must find the priests, kill them and hopefully end the invasion. Doom games have never been known for deep, compelling narratives, but Doom Eternal does a good job. It’s nothing spectacular, but the game delivers just the right amount of twists and turns to keep players engaged. Much of the worldbuilding is left to codex pages acquired throughout the game, which weaves together into interesting lore. The story weaves together into a fifteen-hour campaign that despite a rushed ending comes off as satisfying. Doom Eternal’s campaign doesn’t reach the character-driven highs, the philosophical depth or the insanity of other games. It has just the right amount of plot and character development for the game it’s trying to be, which is an adrenaline-fueled shooter about moving fast and tearing demons apart.

Across fifteen hours, players will run and gun, manage resources, collect secrets and platform across a wide variety of stages. While Doom 2016 confined players to the UAC base, the Mars landscape and Hell itself, Doom Eternal broadens the horizon to include destroyed cities on Earth, space stations and other surprising locales. These arenas help facilitate what Doom Eternal is best at, adrenaline-pumping battles. Doom Eternal is about giving players powerful tools, knowledge and an arena, and then asking them to find the best way to tackle the situation. This is a game where players can’t sit back and recover health, or spray and pray their way to victory. It’s about abusing an enemy’s weak points, using the right type of weapon, juggling resources and always using the environment to aggressively pursue the demons. 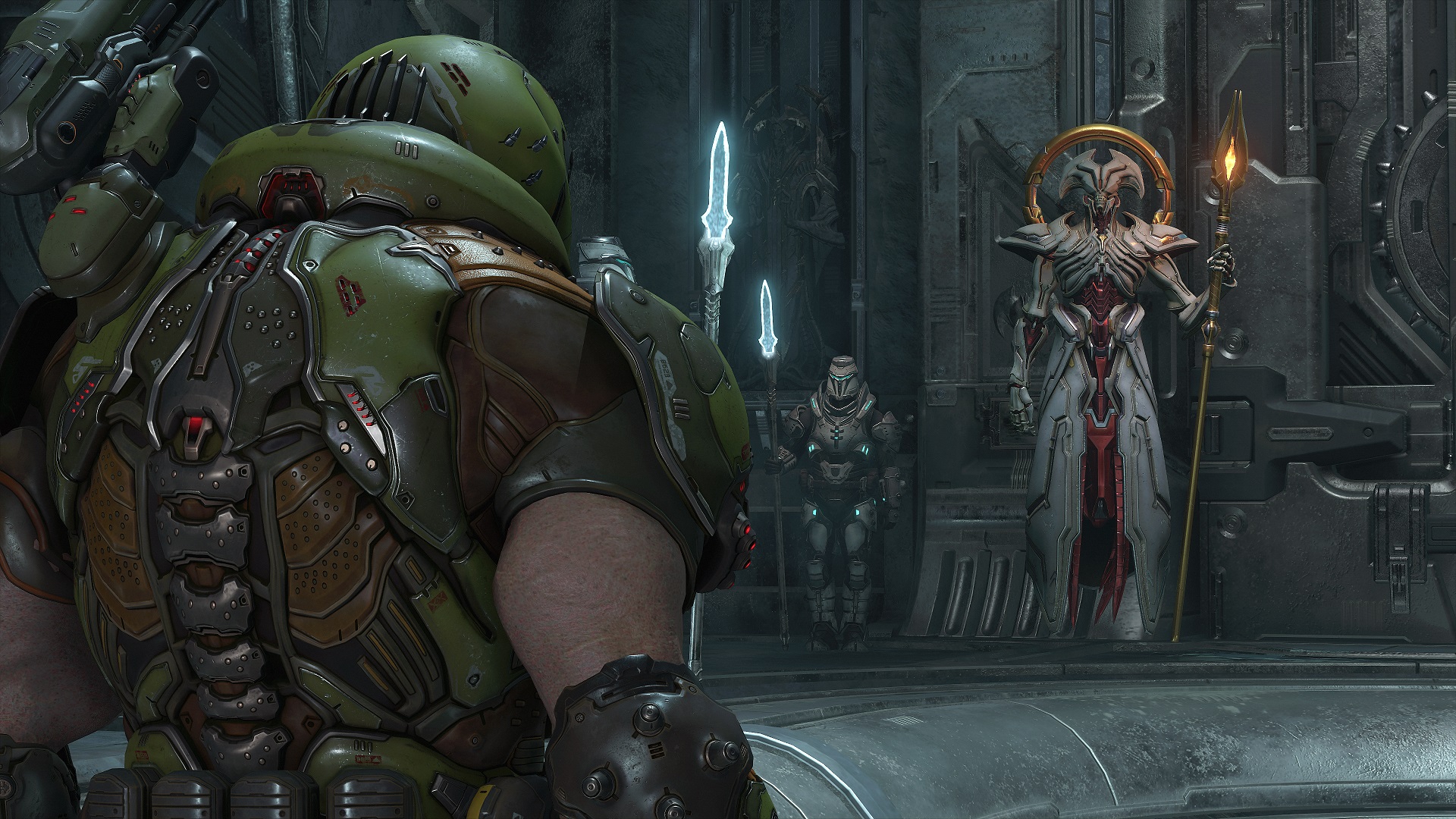 Probably the most significant change to the gameplay loop involves resources. In Doom 2016, ammo, health and armor could typically be found on the ground or earned through Glory and Chainsaw kills. In Doom Eternal, placed resources are kept to a minimum. Instead, players must use their tools to get more of what they need. In dire need of some health? Perform a Glory Kill. Running low on ammo? Whip out that chainsaw. Armor depleted? Burn some enemies with the flamethrower. Surrounded by enemies? Use a Blood Punch shockwave. There’s always an answer to getting out of touch situations and the game spawns plenty of cannon fodder (Zombies, Imps, Gargoyles, etc.) to make replenishing resources possible, which is a good thing.

Doom Eternal is relentless with every combat encounter being an edge-of-your-seat moment. The enemy AI ruthlessly hunts you down, but battles never feel overwhelming or unfair. Enemies now have weak points and are more susceptible to certain weapons. For example, the Revenant’s cannons can be blown off with a well-placed sticky bomb or sniper shot. Meanwhile, the Mancubus cannons make excellent fodder for heavy cannon fire. It’s all part of the game’s updated gore system that encourages dismemberment. All but a few enemies have weak spots and learning how best to approach them is just a part of the engaging and immensely satisfying gameplay loop. Of course, that gameplay loop wouldn’t be that satisfying without great weapons and Doom Eternal doesn’t disappoint. Though most weapons return from the Doom 2016 (the Ballista replaces the Gauss Cannon), they’ve been altered to make them feel more powerful. Each gun comes with two modifications that can be manually changed on the fly. There’s a lot of different weapon combinations available and experimenting with them to find the perfect playstyle against the varied demons is part of the fun. Rounding out the gameplay loop is a vastly-expanded parkour system that’s one of the best and worst mechanics in Doom Eternal. In addition to double jumping, which was in the previous games, the Doom Slayer can now dash, swing from monkey bars and climb specific walls. This enhanced mobility has allowed id to build heavily vertical levels for players to take advantage of when tackling large groups of baddies. With jumpads, monkey bars and multiple levels making up some of Eternal’s arenas, the game actively encourages you to find unique ways to take advantage of the arena to get a drop on the enemies.

Taking advantage of the parkour elements in conjunction with resource management, weapons and enemies is what makes Doom Eternal such a fun romp. It’s the parkour, however, that becomes a problem outside of combat. The game frequently breaks up its action with platform-focused sections that require precision and proper timing. It’s fine at the beginning of the game, but towards the end, when more and more is thrown at you, platforming becomes more of a chore to complete between each arena. Nothing is as terrible as the swimming sections, however, which are slow, cumbersome and annoying, thanks to radioactive damage slowly chipping at your health. 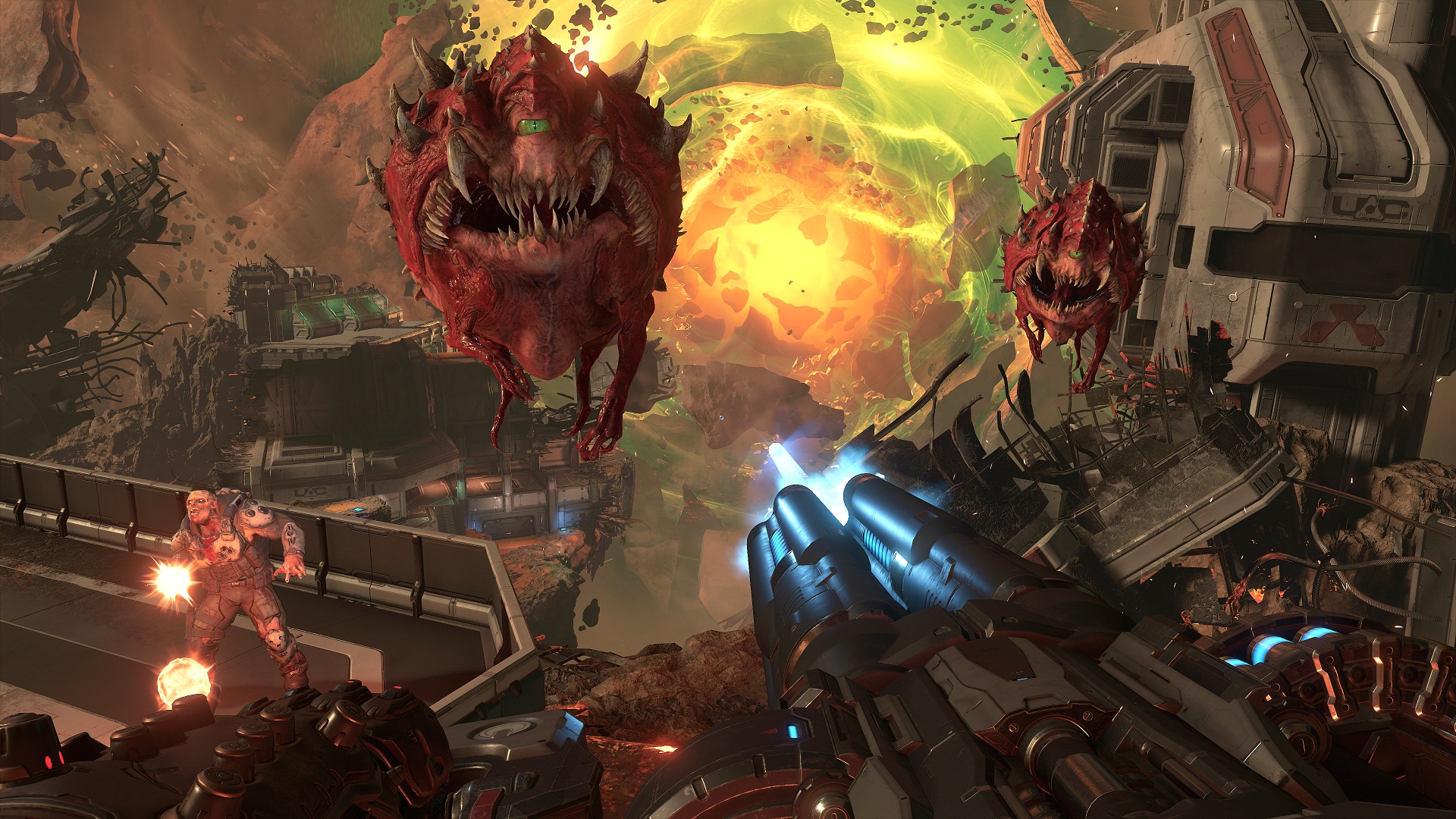 Doom Eternal is at its best when asking you to destroy demons methodically. It not only provides the right tools during your first playthrough but also offers incentives to keep you hooked long after the credits roll. The game has tons of secrets to unlock, cheat codes to use and master levels to beat. There’s a lot to keep you going in the campaign, but Doom Eternal also has multiplayer. Certain Affinity handled the multiplayer in Doom 2016, and despite some growing pains, it ended up a robust multiplayer experience with some interesting ideas. For Doom Eternal, id Software took control of multiplayer development and pretty much threw out everything Certain Affinity did, asides from the playable demons. Rather than a team-based multiplayer experience, Doom Eternal features a 1 vs. 2 experience dubbed Battle Mode where one player takes on the role of the Doom Slayer and the other two as demons. It’s a round-based mode where rounds are won when either the Doom Slayer kills both demons or the demons kill him. On paper, it’s an excellent idea for a mode. The problem is that’s all it has to offer. Playing as the Slayer is just like playing as him in the campaigns. The demons are far more interesting with their different movesets, attacks and support abilities. When playing on the demon side, Battle Mode feels like a hero shooter, with players needing to coordinate a strategy with their chosen demons. There are some interesting combinations to be had with the five available demons, but Battle Mode never builds to anything special because of how little there is to the mode. It would have been great as a game mode for an improved multiplayer experience, but it’s rather lackluster and superfluous on its own.

id Software has been at the forefront of technology since the studio’s inception back in the 90s. The id Tech engine has always done a stellar job at delivering stellar graphics without compromising performance. Powered by the new id Tech 7 engine, Doom Eternal delivers a stellar presentation without much compromise to the game’s performance. Whether it be lighting, textures, models or effects, the game is a massive step up from Doom 2016 and one of the best-looking games on the market. Most impressive is that the game can look as good as it does, but still maintain a near rock-solid 60 frames-per-second. All this is especially true with the demons and environments. All returning demons, except for the Revenant and its oddly colored eyes, have been completely redesigned to look far more intimidating and fiercer. The gore system, which allows players to destroy their bodies with gunfire dynamically, is particularly impressive to behold. Meanwhile, id Software has crafted massive levels with remarkable levels of detail and beautiful art direction. Doom Eternal isn’t just a game that runs beautifully, but also one filled with all kinds of wonderful details to take in. 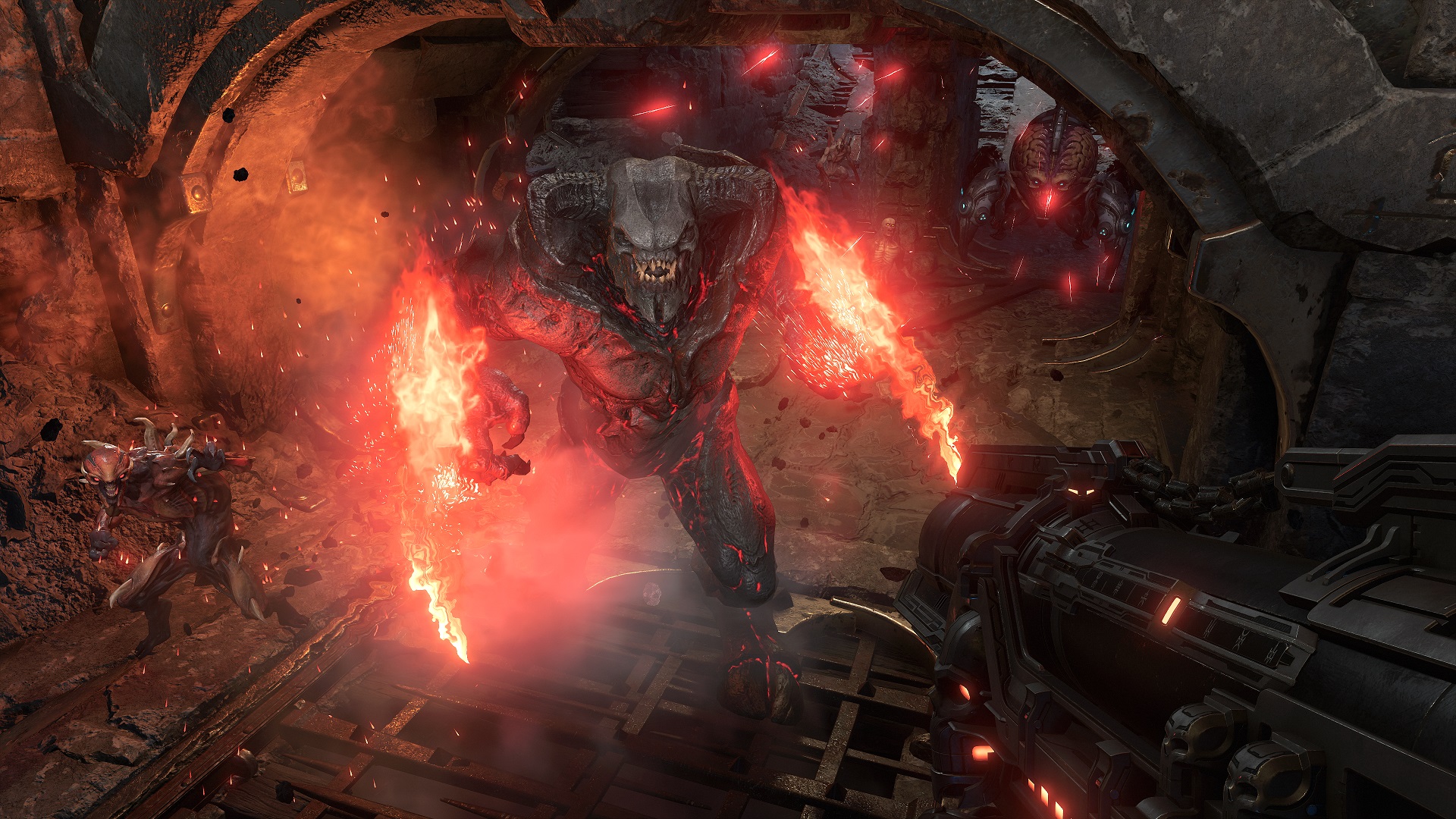 At one point in Doom Eternal, we’re told that “The Only Thing They Fear is You,” which is a bold statement to make. id Software, however, gives players the tools to instill that fear in all adversaries the Doom Slayer faces. The game builds on the solid foundation of its predecessor by taking what made it great (the fast and adrenaline-fueled gunplay, the excellent weapons, the enemy variety, etc.) and injecting it with fresh ideas. The greatly expanded mobility and sizable arenas open new combat opportunities. Meanwhile, the added weak points and resource management keep players engaged as they seek a solution to make it out in one piece. The game only stumbles when a fight finishes and its attention turns to frustrating platform sections. While Doom Eternal’s gunplay is pinpoint precise, the parkour abilities lack the precision for precise platforming. It’s also disappointing to see id Software replace what ended up being a robust multiplayer experience in Doom 2016 with something lacking content and substance. These problems are annoying, but they’re just small blights in what is an excellent FPS. When everything comes together, Doom Eternal’s combat, mobility and levels combine to create one of the most satisfying gameplay loops and FPS campaigns in years. The Doom Slayer came, he sawed and he lived up to his reputation.