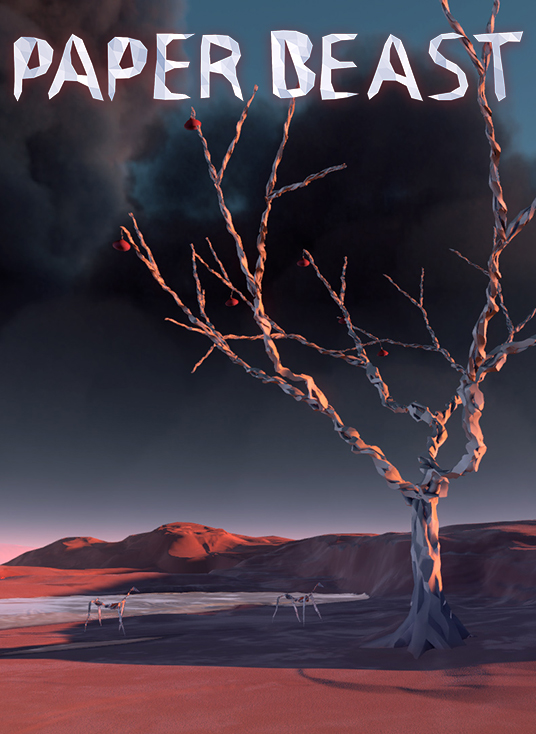 Everything in the world interacts with everything else, or at least everything nearby.  Animals and plants evolved to need each other, sometimes as food and other times in a more symbiotic fashion, but as a general rule the landscape is something life lives on top of, or at least to a reasonable depth.  The skin of the earth is more affected by weather over time than the life it supports, but digital creatures are much tougher on their environment.  The sandy VR worlds of Paper Beast are built up and worn down by those who live there and learning to work with this strange and alien ecosystem is the only way to progress.

Paper Beast is a broken environment set in the lost backwater of a digital universe.  The player doesn’t initially start off exploring it but rather is tossed there when the game they’re playing unexpectedly crashes.  One moment it’s J-pop and fireworks, the next a desert with number-shaped clouds hanging in the sky.  A giant friendly creature made of twisted lines sticking out every which way from its immense frame quickly befriends you and then it’s off to explore this world to figure out exactly what’s happening.  It’s a journey through the wilderness meeting new creatures as you go, most looking like they’re made out of folded paper.

While the physics of Paper Beast are straightforward, learning to use them means interacting with creatures that are beautifully alien.  Interaction is best done with the PS4’s Move controllers but the standard one works fine too.  The left hand is for movement, teleport and snap-turn for maximum comfort, while the right interacts with the world like a giant springy fishing pole.  Grabbing something is as simple as pointing and pulling the trigger, but not everything can be moved.  Plants are easy, whether you pluck off a fruit or yank the whole thing from the ground, while animals tend to be a little more massive.  The smaller bug-like creatures are easy to move around, but anything bigger tends to require a bit more force as the line connecting the controller to the critter bends with the effort.  As a general rule, though, you’ll want to be playing with smaller items to solve your way through the world. 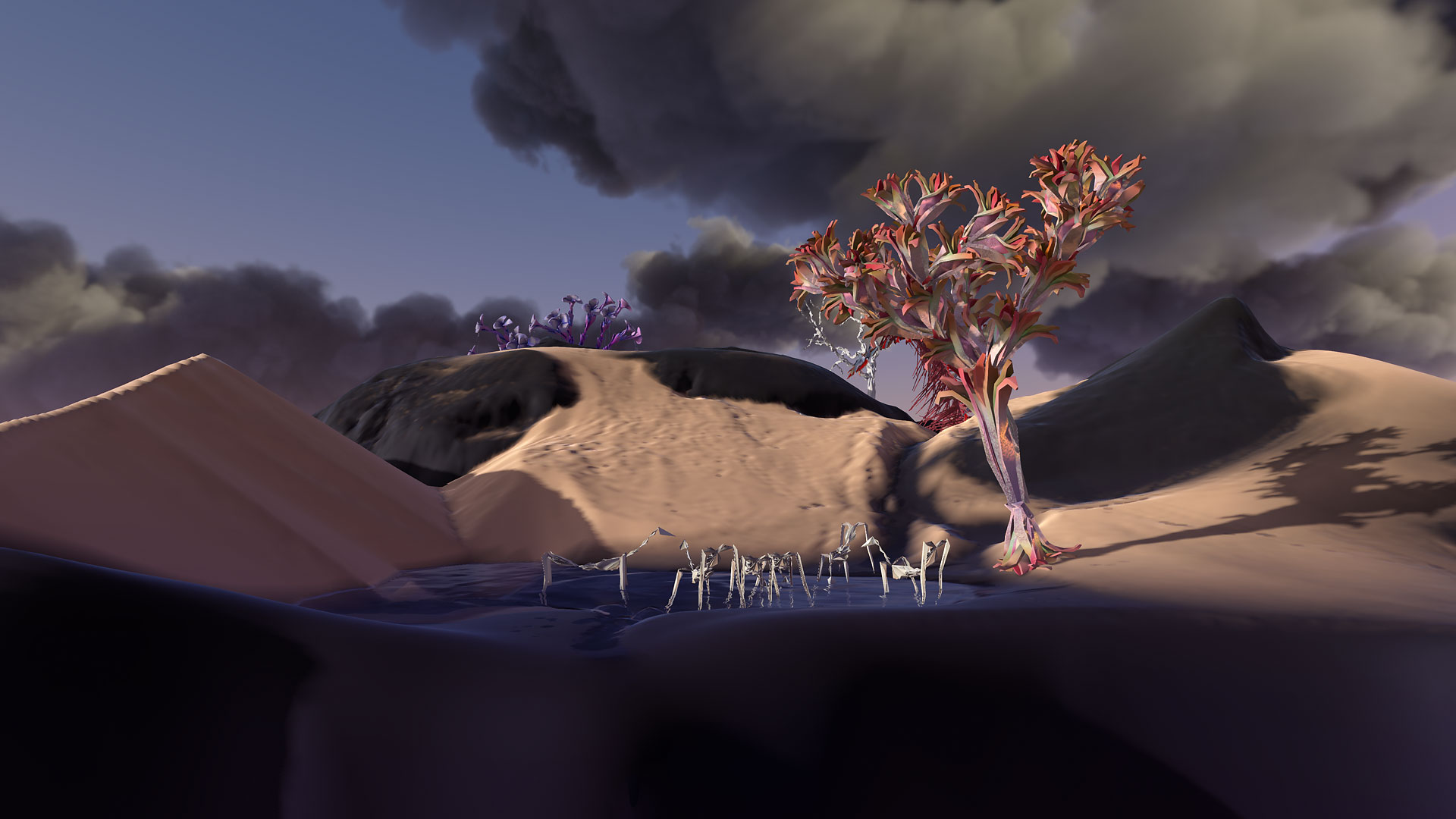 A group of waterfalls, for example, flows nicely over a series of terraces but that’s not where it needs to go.  It’s easy enough to pick up and move the turtle-like creature wherever seems best, but what you really want is for it to produce the sand that drops when it’s excited.  Picking up a giant red pom-pom with a long swishy tail makes turtle-thing pay attention, dropping sand wherever you lead it and blocking the water’s flow.  Which is great to solve the puzzle but doesn’t at all take into account how hypnotic it is to swing the pom-pom through the sky, dragging the tail behind it like a freaky-fluffy ribbon dance.  A huge part of Paper Beast is getting lost in its interactions, which tend to be beautiful as often as they are useful.  And surprisingly playful too, as I found out when discovering the water droplets springing up from a fountain were actually the shimmering blue letters H2O.

The adventure is divided up into six chapters, and while all told this can be finished in three to four hours, there’s replay to be had either experimenting with each section’s toys and physics or tracking down collectibles that add to the second half of the game, the sandbox mode.  While you’re effectively immortal and un-harmable in the main game you’re still a traveler through its lands, but in sandbox you get to be a god of your own domain. Create a landscape, shape it directly or with the abilities of the various creatures, adjust time of day and weather effects or just toss in a bunch of creatures and watch them interact.  Everything in Paper Beast is simulated so the actions are generated on the fly according to the situation.  While this is true as well in the core game, in sandbox you get to experiment in any way that catches your fancy of the moment.  Build hills, set a river at the top, watch it erode a channel down the sand and pool at the base, then drop the temperature to freeze everything in place as the creatures in your own personal biome slide across the ice.  It’s a low-pressure way to simply enjoy the various complicated systems, pitting them against each other to see what falls out. 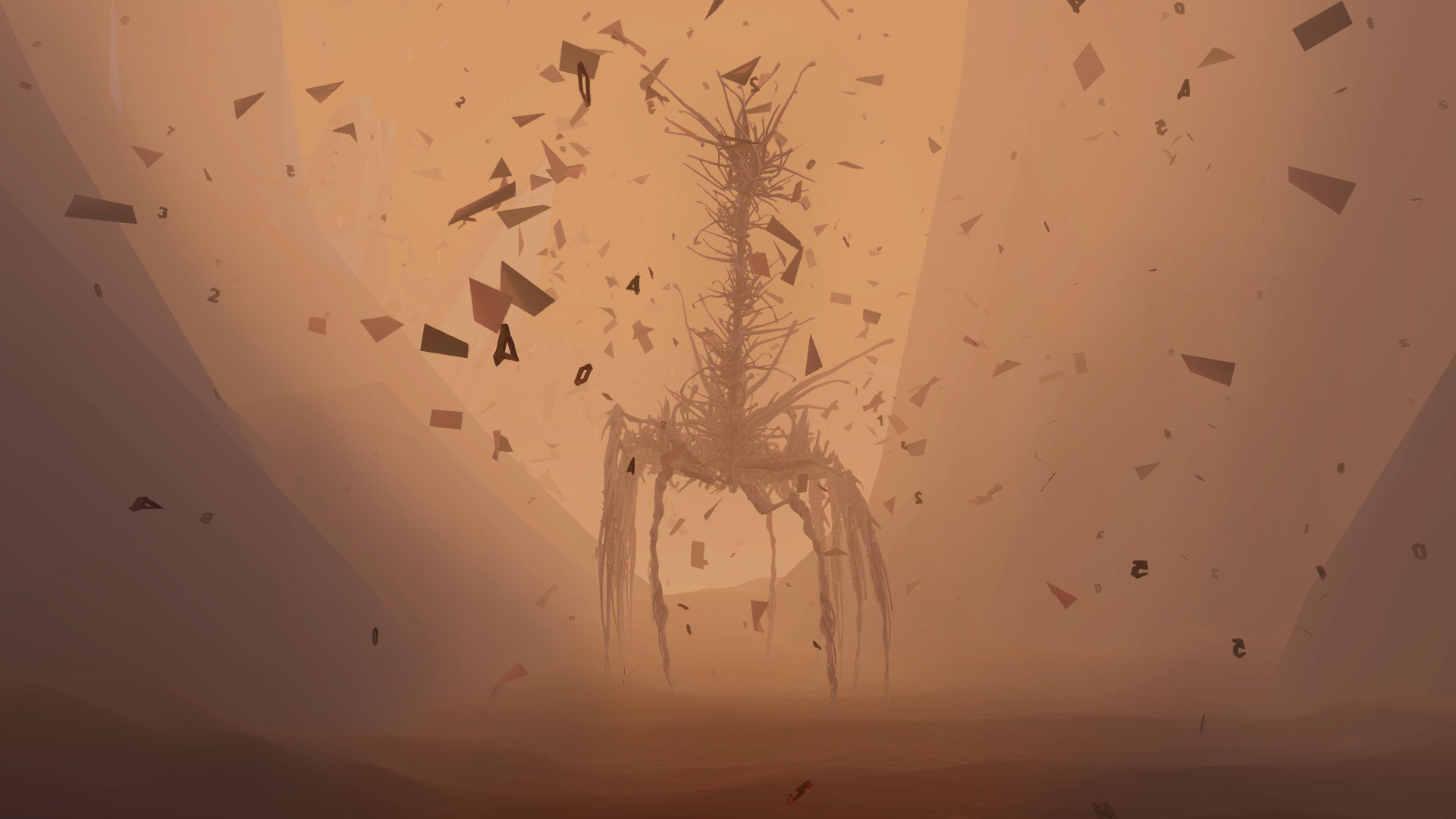 Paper Beast is a unique adventure/puzzler set in a simulated world that reacts however you tell it to, once you figure out its rules.  While half the fun is figuring out what the tools in each area do, there’s almost always different ways to play with them outside of the intended solution.  In one area the horse-like origami animals kept getting blown off a ridge they were trying to cross, too light to fight the wind, and while the goal was to figure out how to help them it was also fun to pick up and send them into the breeze, flying the poor critters like a kite.  Which sounds mean, now that I write it out like that.  Elsewhere in the level were fruits that sunk into the earth and grew a new plant, and at the top of the ridge giant beetles walked their young from one cave to another.  It’s as much environment as level, alien and weird but also beautiful, and that remains true for every stage and scene from the weird J-pop beginning all the way through the end of Paper Beast‘s deteriorating digital world.