When it first came out in 2014, Shovel Knight was an immaculately-crafted platformer, a then-unique throwback emulating the style of NES classics such as those that came from Capcom. And in 2020, Shovel Knight is still a platforming classic, arguably even moreso thanks to outstanding expansions, but now it’s also something I don’t think we could have predicted it becoming back then: a franchise. Yacht Club’s creation has became such a massive staple of the indie gaming scene that our tool-wielding hero has adorned a good chunk of merchandise, cameoed in several other games — including Super Smash Bros. — and now has two additional spin-offs coming with the assistance of different developers. Not that any of this is a bad thing, mind you. If anything, it kind of highlights how iconic the original game has become. Plus, having played said spin-off games, I can guarantee they’re likely to do their big brother proud. 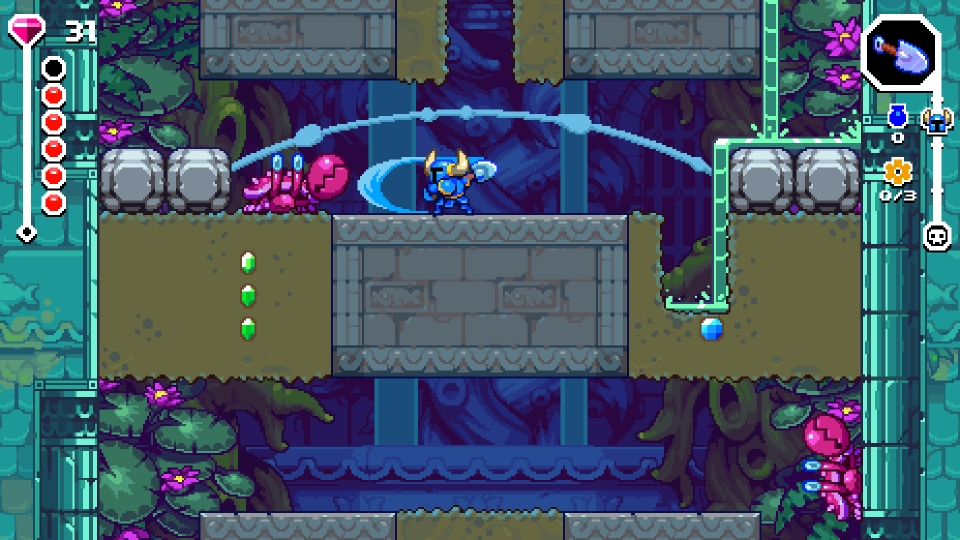 The two games would be Shovel Knight Dig and Shovel Knight Pocket Dungeon, and while each has the same spirit and flavor of the original, a notable difference I felt is that each title has a more arcade-ish feel to them, as opposed to the more NES-oriented homage of the original. In the case of Shovel Knight Dig, though, that may not be much of a surprise. The developer here is Nitrome, who rose to prominence thanks to several of their web games that have been seen on the likes of Newgrounds. And if you’ve ever played any of their games, then you should be familiar with how they know a thing or two about crafting excellent arcade games across various genres, as well as how to utilize impressive and colorful pixel art. So needless to say, they’re in their element here.

So with one look at Shovel Knight Dig, your mind may immediately jump to the likes of Dig Dug. And if so, then your mind may have jumped to conclusions too quickly. Sure, digging downward and side to side is the core gameplay mechanic, but Shovel Knight Dig is way speedier, for one. Largely because if you take too long, a giant tunneling descends from above and tries to kill you, meaning you have to outrace it. But a lot of the hazards such as flying enemies in gaps between big and sudden giant drill that can hit you or wreck your path do indeed require quick reflexes, as do the platforming and combat mechanics in general, especially if you want to grab the three secret golden gears in each level needed for various boosts and pick-ups. 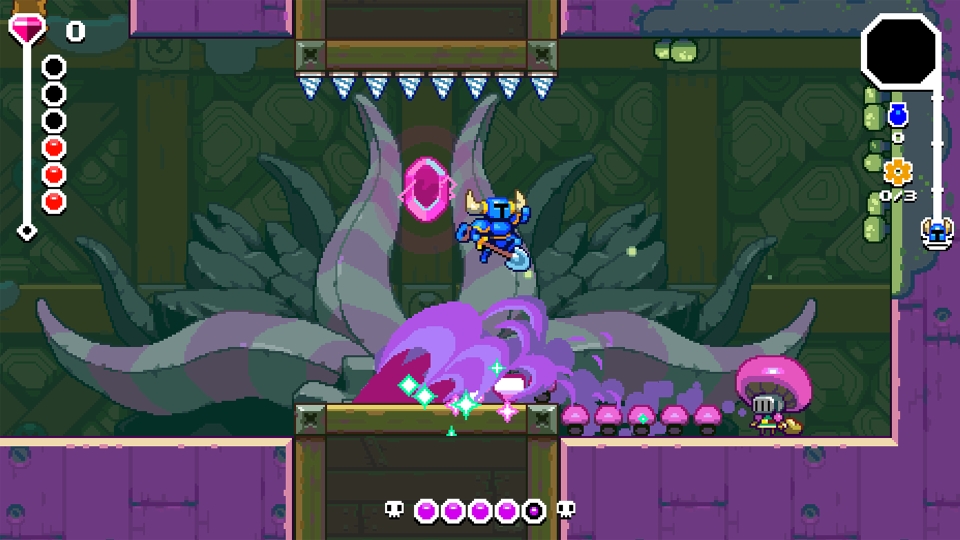 So basically, what you have is all of the platforming action and basic mechanics of the original Shovel Knight mixed in an eye-catching package with some gorgeous hi-bit artwork (now evoking the SNES era), a greater emphasis on new digging action, roguelike mechanics, more items to work with, effects to deal with the shrinking spells, and impressive vertical levels with various secrets like shops and treasure-filled caves to be unearthed by striking cracks on the walls. And then you top that off with impressive boss battles against the likes of Mushroom Knight, one of the evil Drill Knight’s associates. Aside from being another good boss battle like previous ones in the series, it also sets the stage for even more impressive characters that we’ve come to know from this series. While I didn’t get a chance to spend any treasure on upgrades in between games, overall, Shovel Knight Dig is another potential gem I can see myself coming back to again and again.

A lot of those same compliments can be applied to Shovel Knight Pocket Dungeon as well, like the amazing upgraded pixel art, cool new characters (and the ability to play as previous knights), and emphasis on fast-paced gameplay. Except here, developer Vine has now whipped up a mixture of dungeon crawlers and puzzle games for our hero. To be a bit more accurate, it felt like playing as though Shovel Knight was trapped in a falling block puzzler. While players move freely around the screen, enemies and items drop from above, meaning you have to carefully maneuver around them and try to link up groups, like a variation on a game such as one of the Puyo Puyo titles. 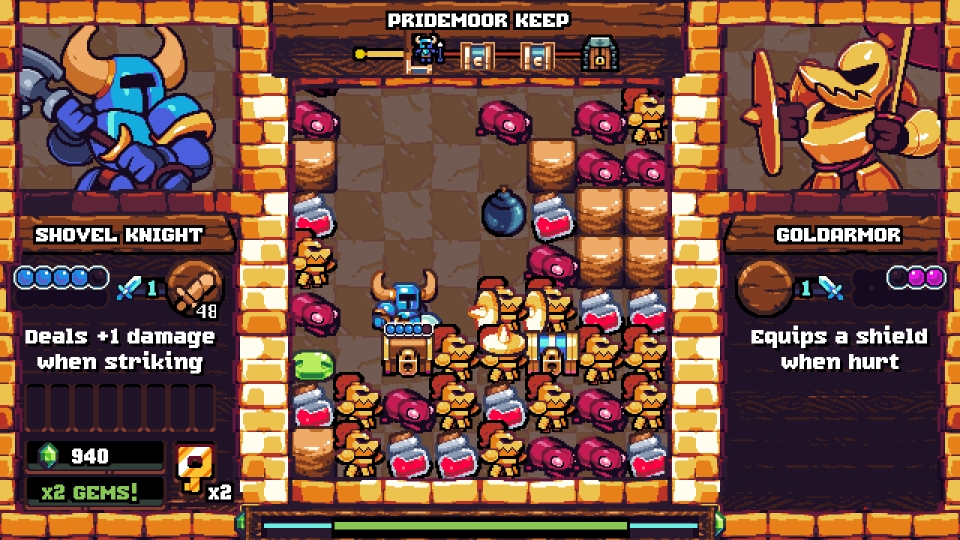 The difference here, though, is that the objects you link together can fight back. To get rid of an enemy or object, Shovel Knight has to move next to them and bump into the object, striking them…only to have them strike back as well. And some enemies take more than one hit as well. This is why creating groups of enemies is important, as it means getting them all at once and attacking as few deadly foes as possible, allowing you to conserve health. So you have to whip together an effective strategy of taking out enemies in large clumps while finding ways to regain health or defeat minions through different means, like bombs, or lucking out and being able to access the shop. At the end of the demo provided, there was a boss fight against King Knight, which was a nice challenge that set the stage for things to come.

Shovel Knight Pocket Dungeon may seem like an oddity, but it has a ton of charm, unique gameplay and an addictive quality found in the best classic puzzle games. So combined with Shovel Knight Dig, it looks like Yacht Club is making sure their signature character still gets the care and attention poured into the first romp thanks to impressive games like these. So no matter how big the franchise gets, it looks like we can expect the Shovel Knight series to still deliver the goods in several different and fun ways.