If it isn’t obvious by now, the world is far more fragile than it looks.  Not the planet itself, of course, because that’s going to keep on spinning no matter what the life clinging to its surface does to each other, but civilization in general is held together by threads that are far more fragile than is comfortable to think about.  Mo’s world ran thanks to the machines created by a race of long-gone giants, and while things are still ticking along on the surface the devices have been left neglected and untended, slowly falling into ruin.  It’s not over yet, though, and with the help of the Omni Switch maybe the machinery can be repaired enough to keep going.  Or maybe not, because Minute of Islands is a game with secrets lurking in the depths of its caverns and they’ll change Mo’s perspective on everything once she’s learned them.

Minute of Islands is a narrative platformer adventure set in an archipelago protected from the spores that have made the world beyond its waters unlivable.  It’s a beautiful place falling into ruin, but while the ramshackle towns humans have built on top of the ruins of the giants’ civilization may be a bit rickety it’s still home. With staff in hand and a fearless heart Mo sets out to reverse the decay, exploring every nook and cranny of the islands above and below the surface, frequently with a bit of puzzling along the way. 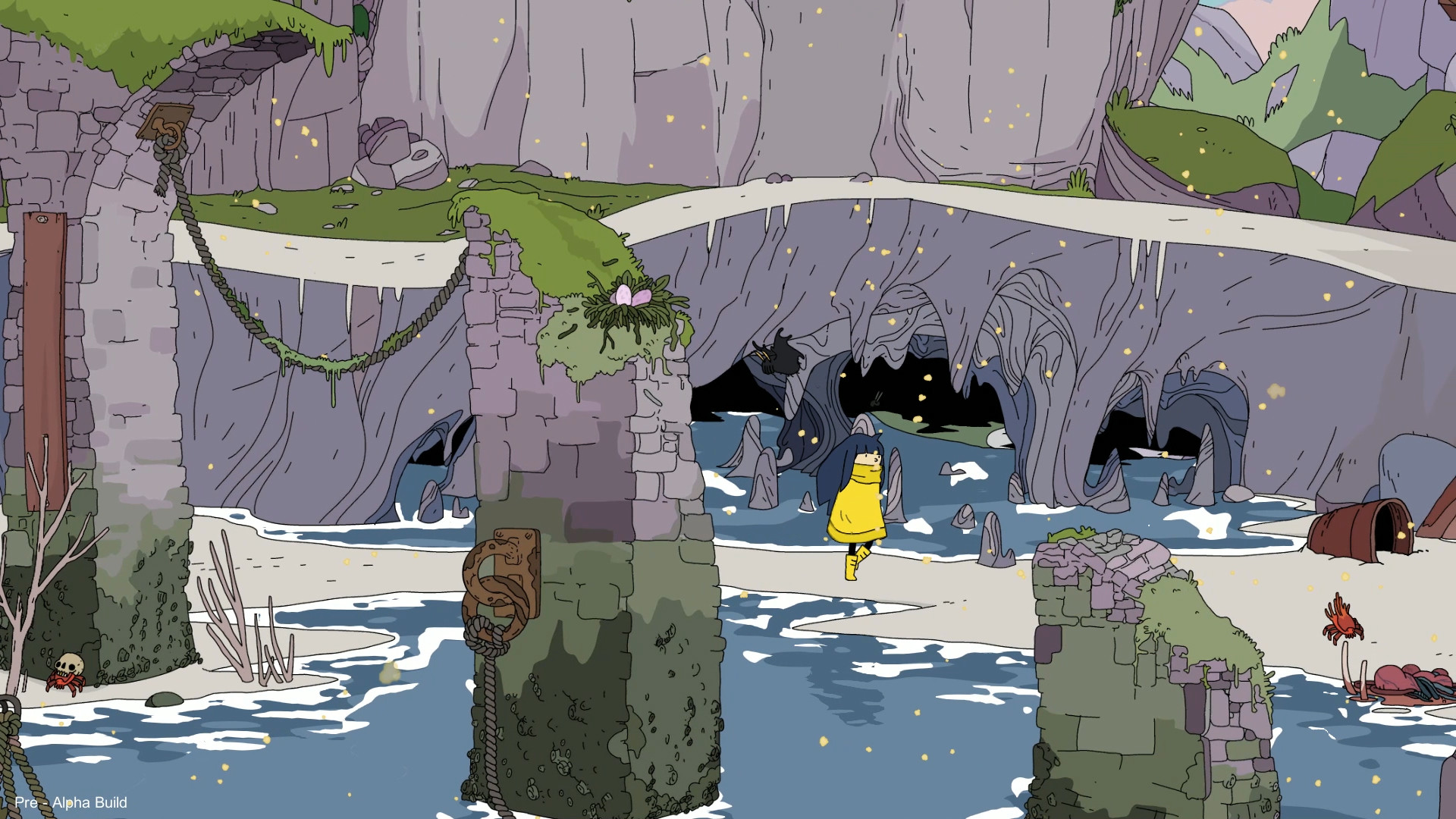 I got to play a demo of Minute of Islands, exploring an area with a nice variety of challenges and scenery, and what I found was a game that’s memorable not just for its world and characters but also the art holding it all together.  The entire game has the look of a European comic book, with everything rendered in clean lines that would have warmed Hergé’s heart.  Mo’s design in particular is fantastic, with her arms only poking out from her bright yellow turtlenecked poncho when doing something that requires them.  The world itself hasn’t a tile in sight, with every part of the scenery being part of a huge hand-drawn environment.  It creates a rich look that makes it hard not to poke into every stray area just to make sure you get to see everything.

As for the gameplay, that’s standard platform-adventuring.  In the bit I got to play Mo ran and jumped, pulled herself up clearly-marked sections of cliff and sneaked the key out of the pocket of a drunk asleep at the bar.  That section hinted at more narrative than I’d gotten so see and I learned later that I missed a few secrets as well. On the main path were the occasional beacons to activate, requiring the use of the Omni Switch staff that Mo carries through the adventure, and these were brought back to life by a mini-game involving moving an energy orb around.  Another area involved manipulating machinery to move elevators and platforms, puzzling out the best way to get to the top of a lighthouse.  It’s standard puzzle-platforming adventure fare, but the art and world bring it to life in a way that made it impossible not to want to see what’s next, learning more about the islands and the people inhabiting them.  Minute of Islands is shaping up to be an incredible adventure in a dying world, and depending on the secret at its heart, maybe one that might require a different idea of saving than is readily apparent.