It’s hard to believe that Team17 are celebrating their thirtieth birthday this year. After a few early titles like Alien Breed and Superfrog, they hit it big with Worms in 1995 and have remained a constant player in the game industry since then, both as a developer and a publisher. So considering that this is a milestone year for them, it should be no surprised that they appeared recently with a whopping ten games to show off to people. Mind you, a few of them like Overcooked! 2 are available now, as was Worms Armageddon (showcased for the franchise’s 25th anniversary), but there was still a lot of new stuff to check out as well, and luckily I was able to find the time to try out a few of these titles.

I may as well begin with the game that that I was a bit skeptical about at first: Ageless. Developed by One More Dream Studios, Ageless is a 2D puzzle-platformer based around the ability to manipulate time. I guess my skepticism stems from the fact that games with this concept have been plentiful ever since the likes of Braid, to the point where it’s basically an indie game standard. And as such, you really need to put a creative spin on such a game in order to ensure that it still stands out. Luckily, One More Dream have a bit of a hook. For one, time manipulation here is done through archery, meaning your character will have to properly line up shots quickly in order to succeed. 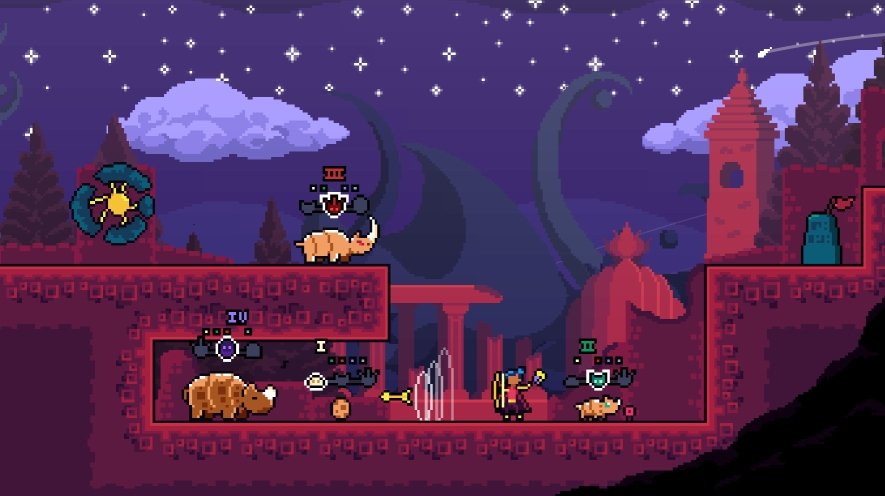 Second, as the title may imply, the time manipulation here involves aging various organisms through different stages. What this means is that you’ll have to experiment with how each object’s stages behave in order to figure out the solutions for getting through various areas. For example, a rhino-like animal is small and advances toward you as a baby, but doesn’t hurt. As an adult, it charges right you and can kill you, which is obvious. And in old age, it’s slow and doesn’t battle at all, yet is significantly larger. So this means utilizing tactics such as aging the animal to an adult, jumping out of the way, letting it crash into a barrier that was blocking your progress, then aging it again so that it can provide a platform needed to reach a ledge. Or having to age a tree in order to provide a platform or have its growth knock something off of a ledge.

So it’s enjoyable and impressive gameplay backed up by what appears to be an intriguing an emotional story taking place in a neat fantasy world. Ironically, the only part of the game that irked me is the mechanic that’s actually related to the title of Ageless. Our heroine Kiara can become ageless by triggering an ability when near certain objects, freezing time briefly and then allowing them to absorb energy and dash by propelling the object in the opposite direction. It’s a nice idea, but the control behind it felt awkward, especially during puzzles that require you to drop a dashable object over a pit, hit it at just the right time, then propel off it in the correct direction. It’s a lot to tackle in such a short amount of time and will take some getting used to. But overall, a solid game so far. 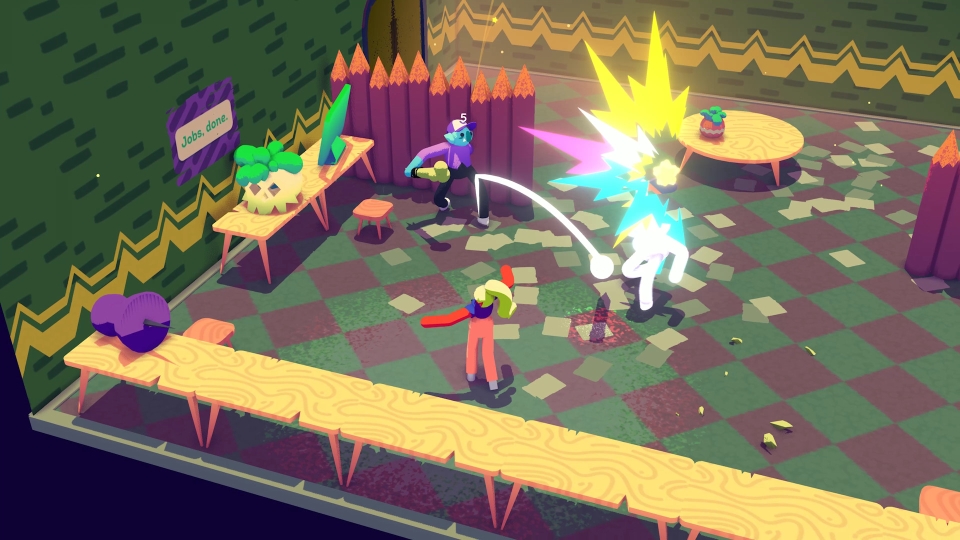 The personal highlight of Team17’s recent showcase, though, was Going Under, which our own James recently previewed since Aggro Crab’s comical dungeon crawler is honestly just so awesome that we have multiple writers here vying to cover it. The unique concept of a dungeon crawler through failed start-up companies in a candy-colored dystopian satire of modern job culture was enough to get me hooked from day one, but it was the impressive gameplay and combat that ended up truly sealing the deal.

What caught my eye was the ability to grab any little bit of office scenery and use it as a weapon. Because as a fan of the Dead Rising games and as someone who just recently reviewed Bloodroots, games like this which allow for a large variety of chaotic action appeal to me. Sure, you can use your more conventional fantasy weapons like axes and swords, but bashing in goblin temps with the likes of cacti, brooms, and various packages and unorthodox office supplies feels the more satisfying. Even more so once you discover the cafes where you can unlock various skills, like a passive ability that makes sure all your thrown objects catch on fire. 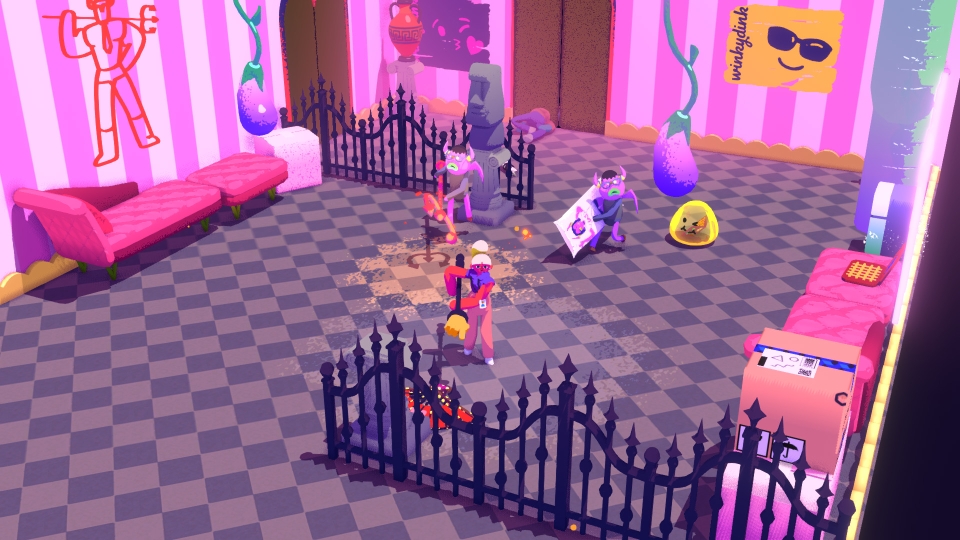 And of course, with all of this in play, it should be no surprise that the combat ends up being excellent. Everything controls nicely and the challenge level is at the right amount. This extended to the first boss, an over-caffeinated former company head who went heavy on rapidly charging at our unpaid intern. They were tricky at first, but through paying proper attention to their attacks and knowing when to strike, they went down just when I was at the last bit of health. We do have more of Going Under to see later, including a deeper dive into the story and characters, along with more skills to check out and stack together, but the stellar gameplay and vivid style is enough to get the game on my list of the most-anticipated upcoming titles.

It appears, however, that Moving Out, a colorful multiplayer action game from SMG Studio, is set to be Team17’s big release this year. Which, having also seen fellow colorful multiplayer games Fall Guys and Rawmen as the big releases for their publishers as well, doesn’t seem too surprising. But in contrast to those games, Moving Out is focusing more on co-op, not competitive play. And thankfully, it can also be played solo as well. The overall goal is simple: as part of a moving company, you head into a house, grab the highlighted furniture and haul it back to the van in time. Of course, it may be easy to carry something like a lamp out the door, but for larger items like sofas and beds, you may find yourself trying to drag it out, wrecking some surroundings along the way. 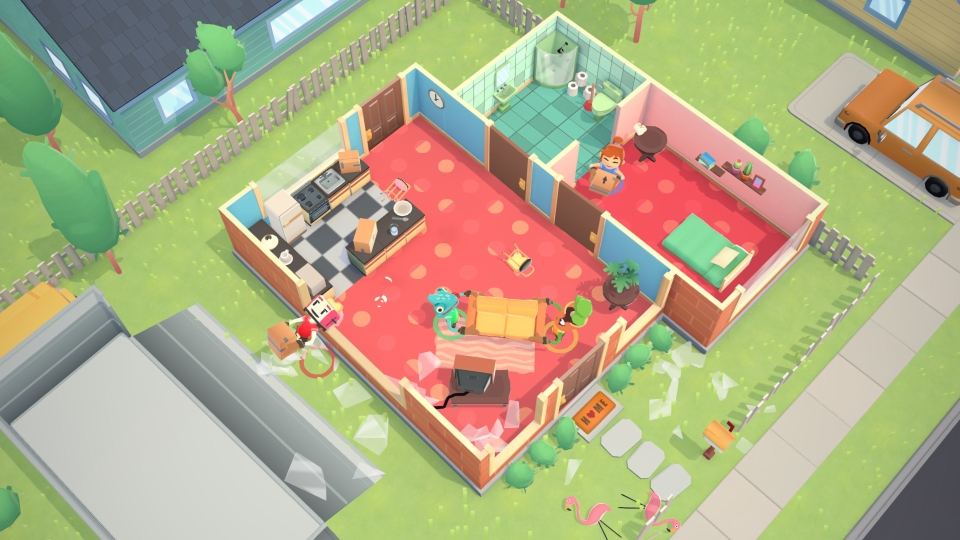 So it would be easy to dismiss Moving Out as another entry into the “wacky physics” subgenre, but thankfully, the levels are solidly constructed and the controls for carrying stuff around all work perfectly. Sure, chucking a potted plant out a second story window to the ground in order to get to the van quicker makes for obvious YouTube bait, but the humor works great and the physics here actually add to the challenge. Moments like this are expected as part of a legitimate strategy, especially when playing with more than one player, where success relies on proper coordination, either in throwing and catching furniture or lifting up heavier appliances and working to get them out faster. It’s fast, wacky, fun and still puts up a fight, so expect big things when the game comes out next month.

There are several other notable upcoming games I didn’t even get to, like Neon Abyss, but it’s clear from even just a small sampling that Team17 is going to end up celebrating their thirtieth anniversary in style. They have a ton of experience over the years when it comes to recognizing quality games and this is set to be one of the years where their experience pays off big time.