There’s a good reason why animals just have the one head.  Any good tabletop RPG-er or wartime general knows you don’t split the party/forces, but rather keep the focus concentrated in a single spot for maximum efficiency.  The same is true for individual living creatures, otherwise we’d be seeing a lot more than the occasional two-headed snake.  The very good bois of Phogs! are two happy doggy heads attached by a long stretchy body, and as expected from one creature with two thoughts, sometimes it has difficulty working towards a single goal.  On the plus side, it’s so cheerful and fun that it’s impossible to be too frustrated when they/it get in each other’s way.

Phogs! is an adventure platformer starring a two-headed dog, and while possible to play single player, it’s best approached in co-op.  Each player controls one of the two heads, and the trick is to communicate well enough that you don’t trip over each other too much.  Each player can grab things by chomping down on them plus stretch the rubbery body and that’s enough to get up to all sorts of trouble while your partner is trying to focus elsewhere.  Plus each head can bark, of course, because chasing seagulls just wouldn’t be the same otherwise. 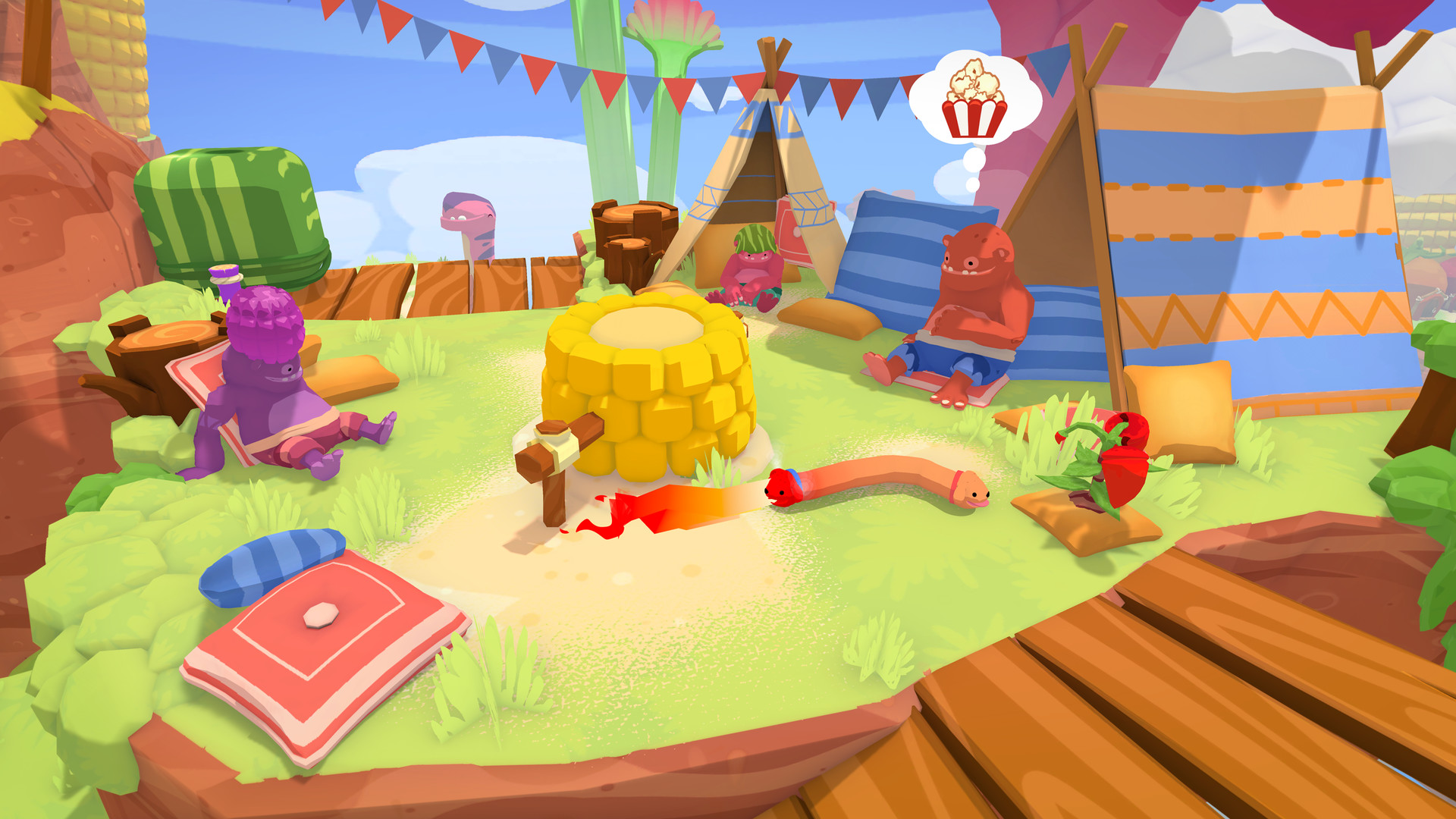 When it came time for my playthrough of the first couple of levels I was given a choice of going it alone or teaming up with a developer and I chose the latter, just for that extra bit of chaos.  The game opens on a high plateau with what look like three golden pathways to nowhere, plus a passageway the camera is super-extra clear is worth investigating.  This drops the dogs, named Red and Blue for their collars, all the way to the base of the level where the tutorial teaches the kind of logic necessary to solve the puzzles along the way.  Taking an exploratory chomp onto a blowing orb opens a door, climbing up an angled plank knocks it down so you can pull a ball across a gap, explore off the beaten path for bonuses, etc.  Then the physics puzzles show up, such as having one dog chomp on an anchor point while the other swings over a gap to grab another anchor on the other side.  The dogs can even chomp on wind and water pipes that, when one dog chomps down, the other sprays out.  The puzzles are all designed to make both heads work together, using cooperation to clear obstacles and communication when you see something hidden off to the side that the other player may have missed.  Soon enough we made it back to the top of the plateau, freeing up the three gateways to the worlds that will act as the big cartoony dog parks for the rest of the game.

Each level of Phogs! has, as is just and proper for any platformer, a reasonably-sized variety of collectibles to chase after to open up the next area and buy extra goodies.  The level goals are all nicely clear, with various characters in each area having things that only a helpful doggy can get for them, frequently by playing a mini-game.  One challenge required guiding a beach ball through a mini-golf course powered by fans that had to be activated in the right order, while another involved popping balloons with a slingshot that required both doggy heads to aim in order to pull back far enough to reach the target.  The more hidden collectibles are golden bones, placed in areas ranging from almost blatantly obvious to sneakily tucked away.  These bones are used as currency at the hat shop so you can dress up your doggy head as necessary.  In addition to the bones each level has a hidden bug-thing and these are devious to the point that I didn’t find any of them during my play-time. 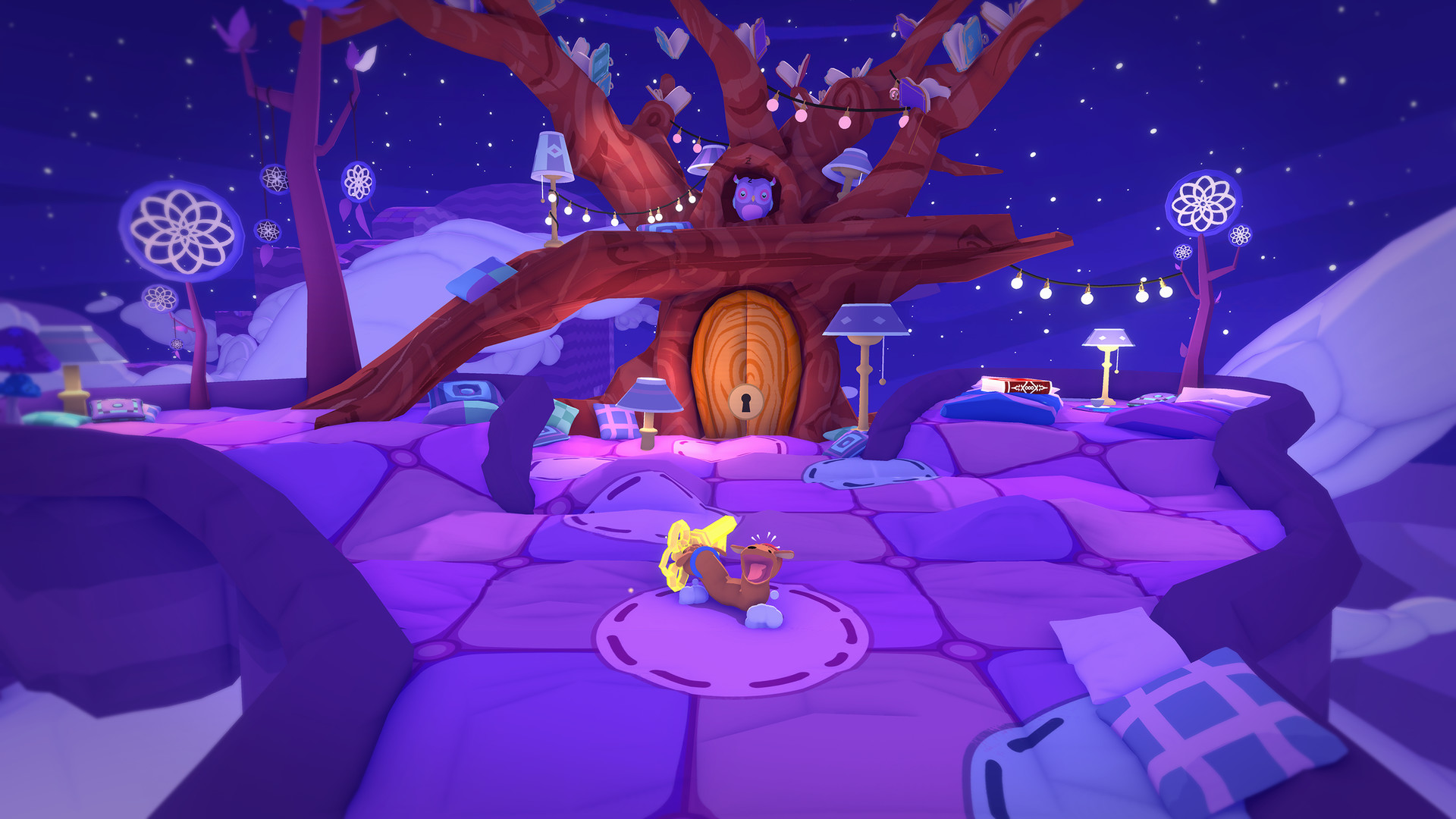 Phogs! is going to be a super-cute and friendly all-ages romp, and while the focus is on co-op it’s just as fun to mess with the other player and have them bark at you for doing it.  Some of the more hidden goals might be better approached single-player, such as combing an area for that missing hidden bug-thing, but whether chasing through the levels either single- or multi-player it’s difficult not to smile at the upbeat pooches. Sometimes it’s nice just to have all-ages fun and Phogs! is promising to provide plenty of cheerful good-doggie puzzle adventuring.