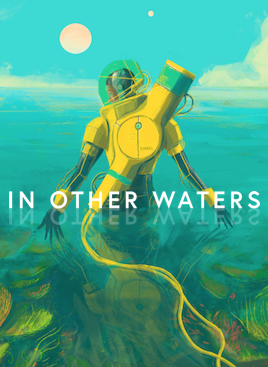 Large, open bodies of water are a unique setting. They have the ability to harbor polar-opposite feelings upon immersion, be this directly or indirectly through creative mediums. Where in one case some may consider the oceans, in all their unseen splendor and vast assortment of life, as inviting, others may take to the vast, inhospitable emptiness where even light may not puncture with a degree of fear and hostility. In Other Waters may immediately snuff out any suggestion of it catering to that less-pleasant response — its descriptor stating this as a “non-violent sci-fi story” — but throughout the roughly-eight hour journey you can’t help but refer, albeit in a smidgen of a dose, to that same anxiety and uncertainty that greatly benefits one’s passage through planet Gliese 677Cc’s alien waters. Developer Jump Over The Age never committing to some horror-leaning ideal, but In Other Waters is not the type of game where active, physical engagement (or simply a reaction to such) is required. The intention being to provide a more downbeat voyage, even if the premise of the story still holds a degree of urgency and desperation about it.

You might look at these initial screenshots — of a gameplay loop that finds you predominantly confined to the exact same interface — and immediately offer concern for its hook. That the implied world around you, relegated to mere topographic contours and minimal icons, will quickly grow tired and stale. That one’s introductory, slightly-perplexing response of: “wait, I have to do this to move that, to get to this just so I can do that?” is a result of unnecessary busy-work for something that should be simpler than it is. That this, in the end, is no way to draw us into the exploration side so as to unravel the mysteries of a submerged world. The worries then kick in: is this a game trying to hide behind its appearance? Its own pretense of minimalism? It’s an understandable early skepticism to raise. Especially considering the player is in fact taking up the role of a supporting AI guiding main character, xenobiologist Ellery, through the unseen oceanic surroundings. That your role is, by design, distant and disconnected from what you may consider the “main events” of the tale. Any interaction with the world, much like the visualization, is implied but not directly or vividly shown. Pleasant font work and use of negative space notwithstanding.

It’s a proposition that isn’t aided by the slower, more conserved pace — highlighting waypoints one step at a time. Lining up compass bearings so that you can guide Ellery from one point to the next. And yet, with a hefty amount seemingly working against it from the get-go, once the relaxed (if not confided) rhythm settles a few minutes in and the genuinely wonderful graphic design become the two main attractions, In Other Waters‘ tranquil tone and pacifist approach to alien contact reveals itself in a slew of positive and smartly thought-out sequences. Resulting in a spectrum of surprising gems that last year’s A Plague Tale: Innocence or Untitled Goose Game triumphed on. The notion that with the right tone and the right presentation, the emotional response can be as note-worthy as the interactive equivalent. One of the first commendations for In Other Waters is how the game treats its interface and how even something as meager as the central, circular panel, feels practically built but cleverly plays into the idea of how much (or little) is revealed of the environment around you. Even the out-of-shot lab you return to from time to time not only makes great use of layout, but drives home that uncannily emotional disconnect as an AI support. One memorable highlight happening after a key story moment — the lone miniature dot representing Ellery’s presence, darting back and forth in the Med Bay…as certain other dots lay static a few meters away. 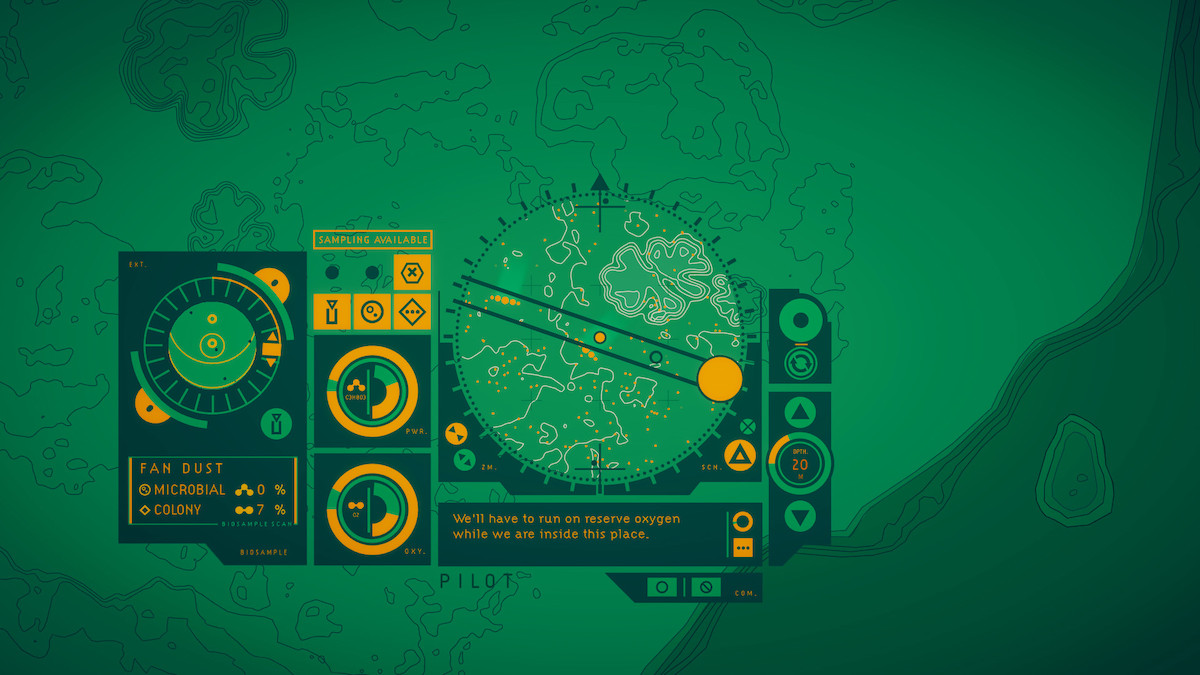 It goes without saying that In Other Waters nails its artistic intents here and fortunately this isn’t one that comes at the expense of a simple-to-understand gameplay loop. The core loop with this presentation being players requiring to “ping” nearby waypoints before scanning them for necessary intel and optional toxicology pertaining to nearby life. Players slowly-but-surely repositioning themselves about the environment — moving from one dot to the next, never quite knowing what may lie outside the perimeter of the tools and instruments at their disposal. At points players are tasked with moving over to the other controls and panels on show. In one case, collecting samples by means of reeling in a crane of sorts. In another, using scavenged materials in the brief puzzle-solving segments. The aforementioned crane novelly acting like a camera lens with its snap-to animations; extracting items from your inventory a simple case of placing them on the chartered circular area on display. In Other Waters clearly isn’t afraid of asking its players to perform what may seem like simple, rudimentary tasks on a frequent basis. Imploring you to engage, at times, with three different face buttons/controls at one time.

Somewhat absurd this over-complication may seem, In Other Waters‘ faithful treating this as scientific research allows this approach to work — feeding back into the story on learning not just of this alien planet, but of the mysterious disappearance of your co-worker. But as an overall package, there are many more pleasant pieces of detail to remark upon. How each point on a map comes with a detailed read-out and descriptor of what’s there. Immediate flashbacks to the Metroid Prime trilogy’s scan lore — the many involved moments of pause when you dedicate a few seconds to simply reading up on that world’s flora and fauna. That said, in its greater emphasis on reading information here, it’s also where a lot of the progression stems from — so far as working out what the game is asking of you. So for those who take a more idle approach, or simply don’t bother to read what’s shown, there’s the risk that some key details are missed. As such, In Other Waters doesn’t always find the perfect balance between what’s vital and what’s secondary/optional world-building. Both text boxes in your interface wrestling for space, forcibly dragging you between two equally-important areas. 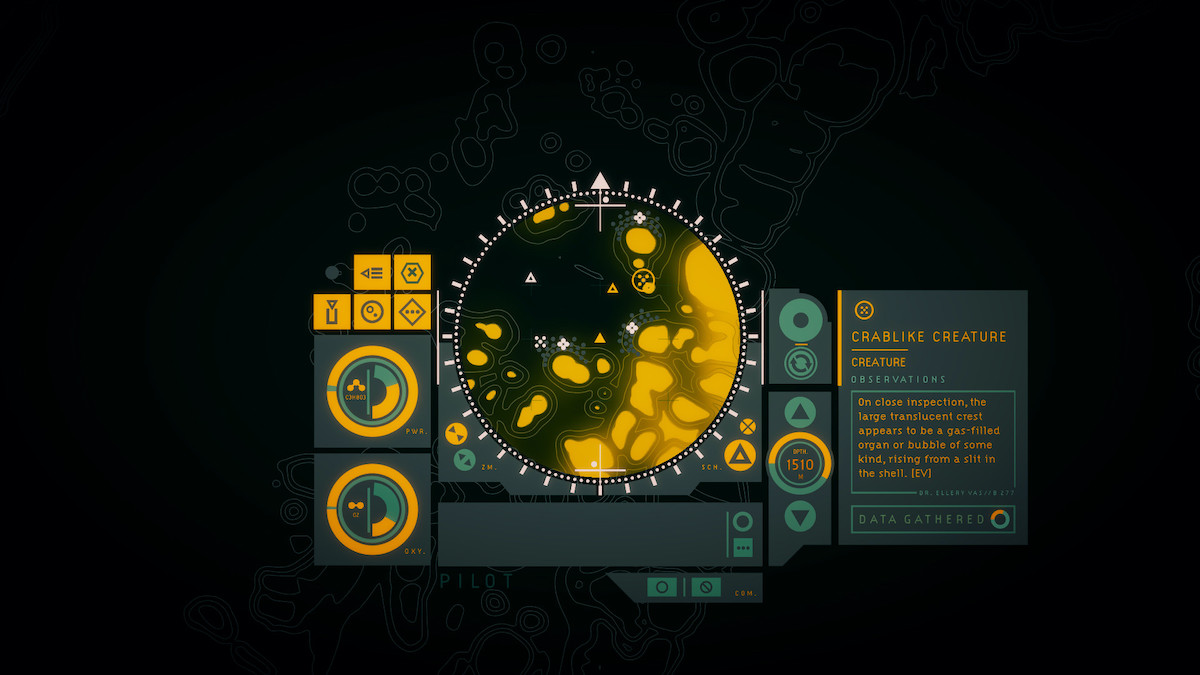 In other examples, this conflict works; a case where you’re navigating toxic plumes that sap away at your O2 levels, all the while (if you’re still curious) new logs continue to display as you and Ellery resume logging new information. Information which, from an inventory standpoint, plays into the toxicology reports that serve as optional collectibles. It’s not detrimental to the experience, but the game does occasionally let explaining each step get the better of itself. Yet it’s that dedication to its world and of its world-building — more specifically, the idea that a general threat isn’t present here — where In Other Waters‘ tone strikes home. More so the chosen aesthetic on display, the assortment of minimal color palettes used to represent each of the key regions…and in some cases, the depths you eventually move towards. Especially in these cases where the topographic contours all around are limited only to that small diameter of space. Creating that anxious trek through similarly-implied darkness. The only visibility that which is directly in front of you — the only guidance those trustee triangular-shaped waypoints.

When In Other Waters cleverly and graciously sprinkles in a bit of that horror-esque unpleasantness on having to push forward (but perhaps not wanting to), it’s a fantastic feeling to react to. One that at its best, carves out great emergent moments of gameplay that compliment that unpredictable emotional state. Having to frantically avoid O2-sapping toxic clouds, all while making sure not to get ahead of yourself as you once more shift between scanning, moving and occasionally extracting samples from the seabed again. Even just scouring the empty, black void is another smart appliance of minimalism the game does justice. There are also those random occurrences where you see a dot, or grouping of dots, denoting a creature of sorts swim by and your first thought is: “is it going to attack me?” Only to then quickly remind yourself that In Other Waters isn’t that kind of game. And maybe that’s the real joy here: that inadvertent (maybe unintentional) playing to our preconceptions on exploration — exploration of an alien, oceanic world particularly — that requires us to tweak ever-so-slightly what we might (or should) expect such small moments to conjure. 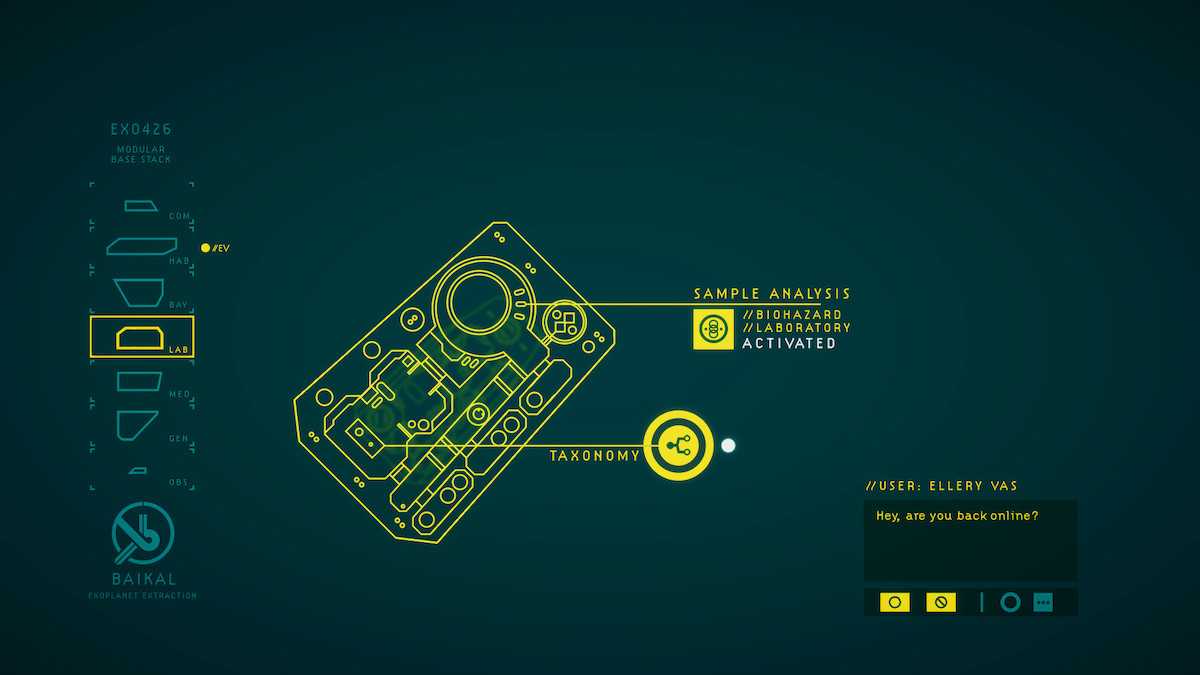 There are of course some small survival elements in place to account for the evident dwindling of one’s power and oxygen levels, but that too is serviced in a way that makes sense to the story being told. Found items can be recycled for either energy source and there are points where this becomes a hesitant case of when and when not to fall back on your inventory. Besides, for those items you’ve only just discovered for the first time, do you really not want to study it further back at base? It may not be the most prominent mechanic here, but like so many things with In Other Waters, these individual components work in context regardless of importance.

The game does have its failings by contrast and it’s a shame that so far as exploration, the game does sadly unfold into a more linear fashion than one would expect. Though there are branching paths, to a degree, the end goal or destination does always feed back into the same route. The next destination or eventual objective to meet, feeling less like delving deeper into the world, more a case of simply following one of the other obvious paths the game simply blocks off. In Other Waters also throws up a couple of technical annoyances too. One case, in what might be the least-appealing segment, requiring you to gather a set number of a particular item and ultimately failing to see completion when the required amount had been retrieved. Unless, of course, all items are held on your person at the same time, wherein the next objective cue is registered. A minor bug sure, but given the way paths are carved here, even for those fully engrossed in the trek, it can be frustrating to have to retread ground. 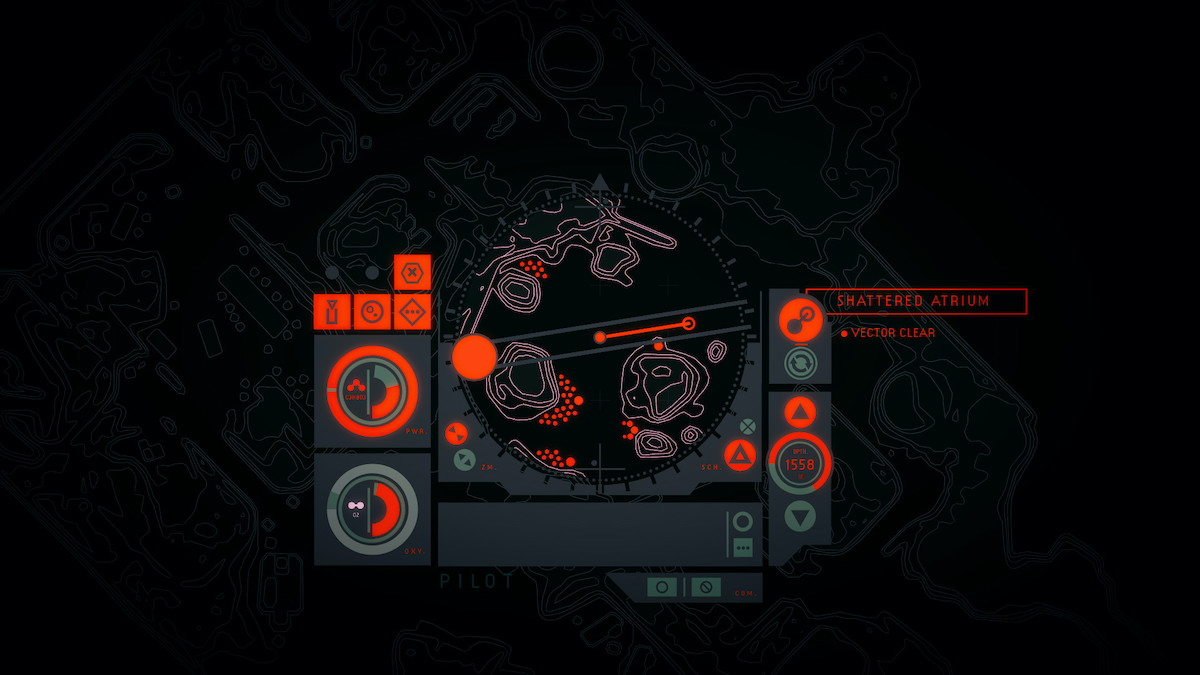 Admittedly this is a game that requires players, from the word go, to get onboard with the idea that pace isn’t paramount and that its complicated controls also serve the greater aesthetic on show. But if you’re willing to go with it and to acknowledge this as a game scarce on environmental baggage, In Other Waters is a great little adventure. While part of the appeal lies with its design, its presentation — its imagining that possible disconnect an AI controller may have in both seeing and not seeing the world around them — it’s the sneaking-in of unease at such large, open bodies of water, where both visuals and tone strike an impressive middle-ground. Some may want to denote this as sluggish, as intentionally slow for some artistic pay-off. But there’s a wonderful amount of emotion to be felt here. Even if it’s merely through some readjusting one’s perception on navigating an alien world — a realization that things aren’t as hostile or as tense as you’d usually expect. Through that clever mix of minimalist color, shape and the vast negative space all around, In Other Waters conjures one of the year’s most surprising and serene recommendations for screen and portable console alike.