Even for someone who’s never played a Rock of Ages game, I can get behind the peculiar premise put forth by developer ACE Team. Drawn as well to the simple appeal of any kind of puzzle-esque conundrum — revolving, most importantly, around guiding ball bearings to an end goal, all while avoiding the dreaded plunge into the abyss all around — there’s some commendation to share with a game that manages to combine puzzle-solving, strategy, tower defense and possibly one of the most popular series of comedy skits. But put the blatant nods to Monty Python to one side and you still have a game, a couple of games in fact, that clearly prove that it’s not all about indulgence in some very selective corner of comedy. A means to an end perhaps; Rock of Ages’ variety of gameplay genres marries rather nicely with its premise. Even if that premise is taking massive liberties with history, to have its players rolling a rather large spheres down paths and channels across many a period of time.

Those themes are here and accounted for. If one were to look at the returning variety of game modes and objectives ACE Team can think of to satisfy the level design, you can’t fault the game’s third outing — Make & Break — on the surface. Traditional tower defense taking it in-turns, the same concept albeit in a frantic 1v1 to see who can crush their enemy first. There’s racking up a hi-score, time-trials, even races where courses are littered with obstacles (of varying ridiculousness). There are stars to collect and more importantly, genuine decisions to consider when it comes to what obstacles or property of sphere you wish to use. All the former content and means to invest in this game are here — it might not be as radical a step-up Bigger & Boulder was — but at least the absurdity of its storytelling and visuals doesn’t get in the way of the genuinely laughable experience, right? Well, as far as the PC side of things are concerned, Make & Break is proving itself to be a harder sell. A much harder sell in fact. One that will need to address many a technical issue one has experienced in the brief time spent with its story mode. 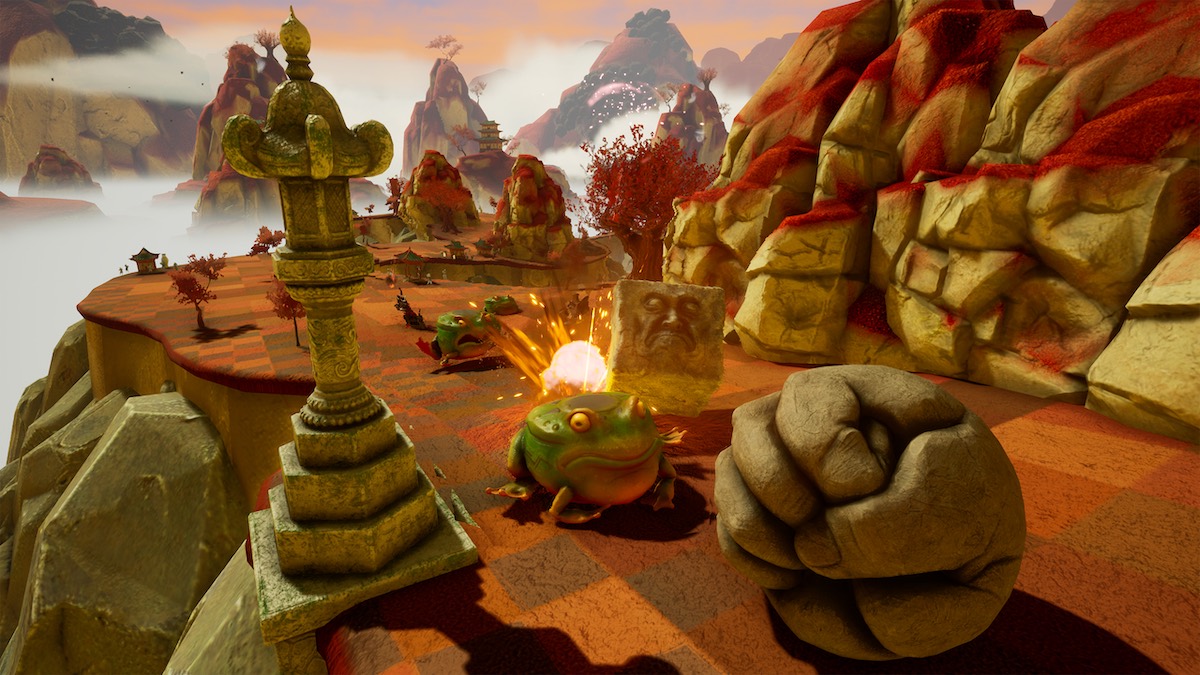 I count six times the beta build has crashed; half-a-dozen moments at the end of a round (of which there are often three in total) or even at the end results screen, whereupon one’s progress is lost and you’re required to return to a game that, in all honesty, is far from feeling like it’s even reasonably designed to begin with. Menu selectors too vague for their own good; some key details during play disappearing entirely upon restarting a game; frame-rate bizarrely dipping between 30 & 40FPS when moving around corners; certain event transitions, such as one involving leaping into a whale’s mouth, failing to trigger. Disappointing as this is to report, Rock of Ages III‘s PC efforts are all over the place. Lose enough patience with its current state (as is inevitable after a half-dozen game crashes) and even the smaller irks begin to grate. The fact that returning to the world map has you spawn in the same place (and not outside the level you’ve only just exited) or even the way the game immediately plunges you onto the starting line before really letting newcomers get to grips with what’s been asked. Or as previously mentioned, how the treatment of its menus, user-interface and such, are so oddly lacking.

But push past the performance woes, the disappearing screen details — and yes, boot up the game for the umpteenth time that session — and there’s some genuinely fun tinkering to involve one’s self in. The tower defense objectives especially remain ingrained with that critical deliberation on thinking multiple steps ahead. How best to use your money to fortify the level from enemy boulders; where best to place contraptions and explosives; how many to place so as to not waste valuable space in the next round. If there’s one thing ACE Team nail again here, it’s that they’ve looked past the subjectiveness of the game’s supposed comedy and have once more focused on a gameplay loop that deserves some key decisions to be made. Even the 1v1 equivalent, not to mention the traditional race to the finish objectives can instill bursts of strategy. Do you yourself knock down obstacles to get through — and risk your pace grinding to a halt — or do you let your opponent do all the hard-work? 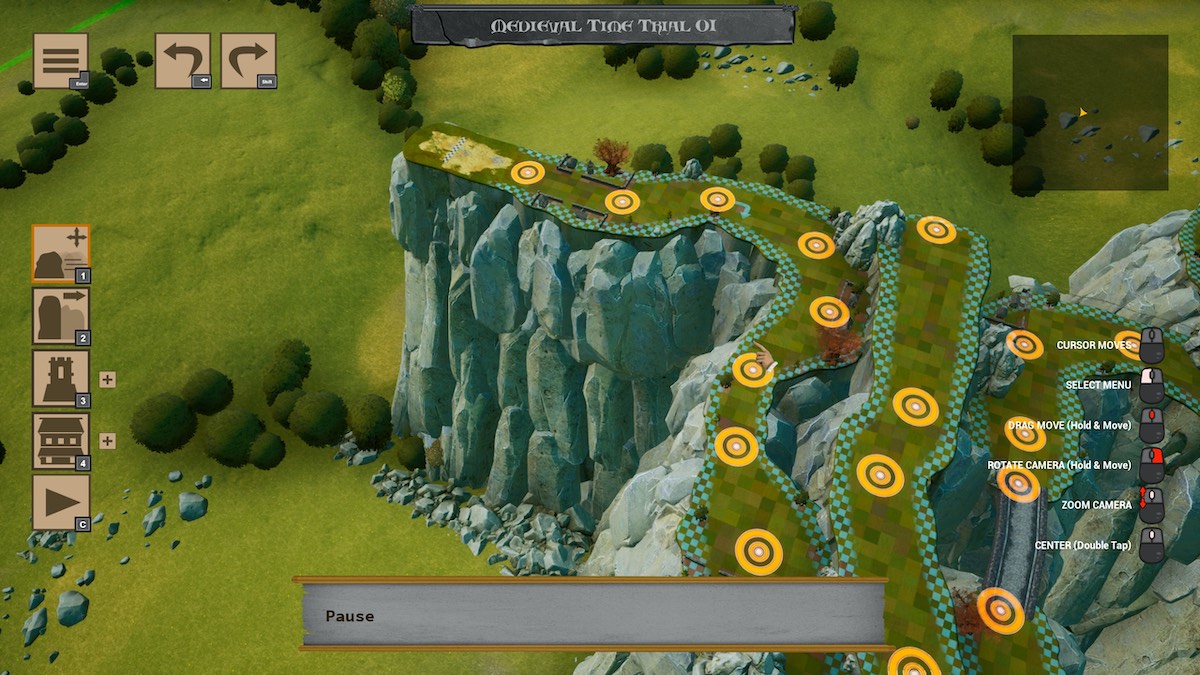 That said, there is a case to be made that Rock of Ages’ pull — so much as its physics-based reliance on emergent moments go — is all down to how willing you are to work around its odd background tinkering. How hitting even the smallest of obstacles, at a slow-enough speed, can still send you flying. Or how one’s presumed knowledge on speed and momentum won’t always equate to you making that successful leap across a gap or hitting a bounce pad at the correct angle. Despite your best efforts to maintain both. While some of this can be brushed off, there are moments that require further scrutiny — the concern being that Make & Break is itself impatient, simply lumping these frustrations on you. That manufacturing unpredictability is somehow warranted. It isn’t. And had the current preview build been more stable and a touch less possessing all the hallmarks of an early Alpha, maybe one might be willing to be a bit more patient.

Some of the current build’s problems are admittedly alleviated by such emergent moments. Moments that call to a kind of absurd nature far removed from its story cutscenes. It’s a simple aspect, but you can’t help but frown acceptingly when you stumble into a cow, only to find said animal stuck to your boulder. Your spherical object trying to overcome the humps made by said animal seconds after. Or even the soundtrack; taking arguably the most famous classical pieces and giving them a souped-up, contemporary twist — how they speed up in tempo and even change musical key on successive rounds. It’s these kinds of little details that, even after one’s less-than-pleasant time, manage to break through the criticisms and the shortfalls. That something as simple as rolling a ball to an objective can still excite and intrigue. If only everything around it wasn’t taken so for granted as the developers are worryingly veering towards. 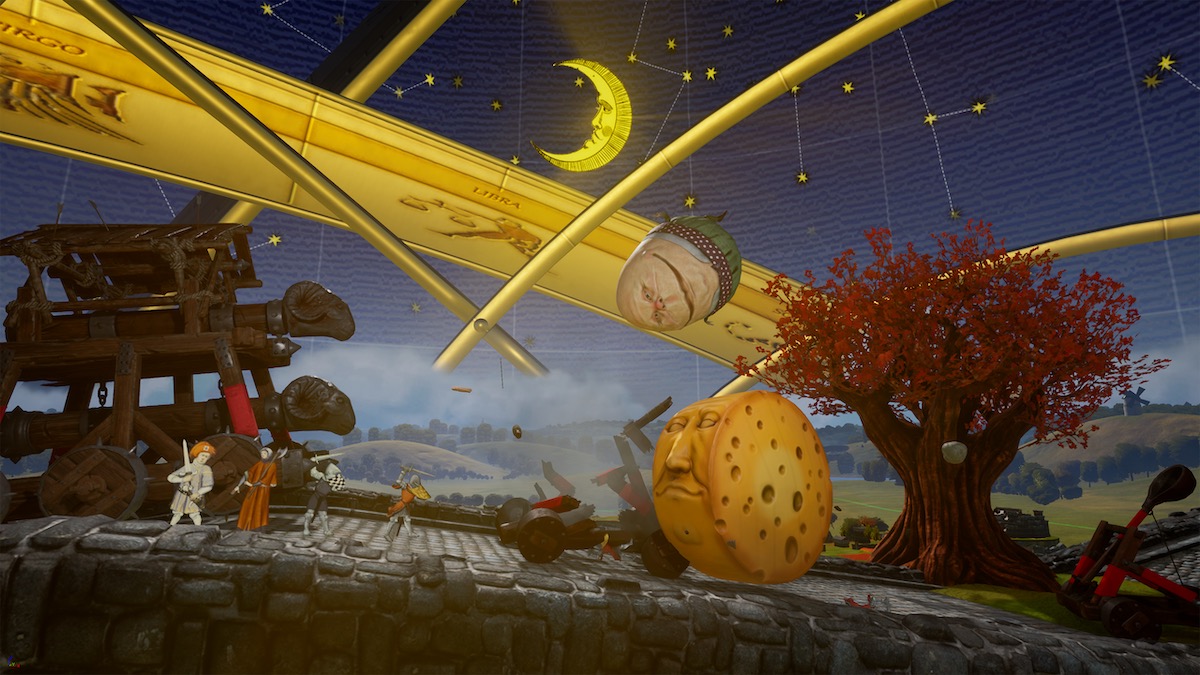 A past love for this kind of premise may have played its part, but Rock of Ages clearly hasn’t lost any of that signature ridiculousness that is all its own. As much its drive to be even more ridiculous with every subsequent boulder type or favorable obstacle dished out for players to wisely utilize. What’s more, it’s pleasing to see the more genuinely tactical elements remain just as crucial to victory. Unfortunately in its current state, Rock of Ages III: Make & Break‘s PC state (at least) is in dire need of some seeing-to. Testing one’s patience with in-game physics, cunning AI and tight arching paths to keep atop is one thing. But a flawed build as this — last-minute delays aside — that’s a few months away from release is worrying. Even the short-burst chuckles administered by its story cutscenes and gameplay alike may not be enough to hide such blatant faults in its current build. ACE Team sorely need to clean up the scattered issues — Make & Break is absurd, happily and welcomingly so, but its technical performance is worrying at present.