I think it’s safe to say by this point that many of us are now well-informed when it comes to ’90s nostalgia. But while we may be able to still recognize the likes of Pogs, grunge music, Baywatch and more, there are still a few tropes and trends from the era we don’t focus on as much. For example, all of the films trying to cash in on Home Alone’s massive success that involved kids getting into wacky, high-concept adventures, like Blank Check or Cop And a Half. But The Big Con, an upcoming adventure game from developers Mighty Yell, remembers such ’90s hijinks. Well, here said hijinks involve having to become a con artist in order to deal with gangsters threatening the family business, but hijinks nonetheless. 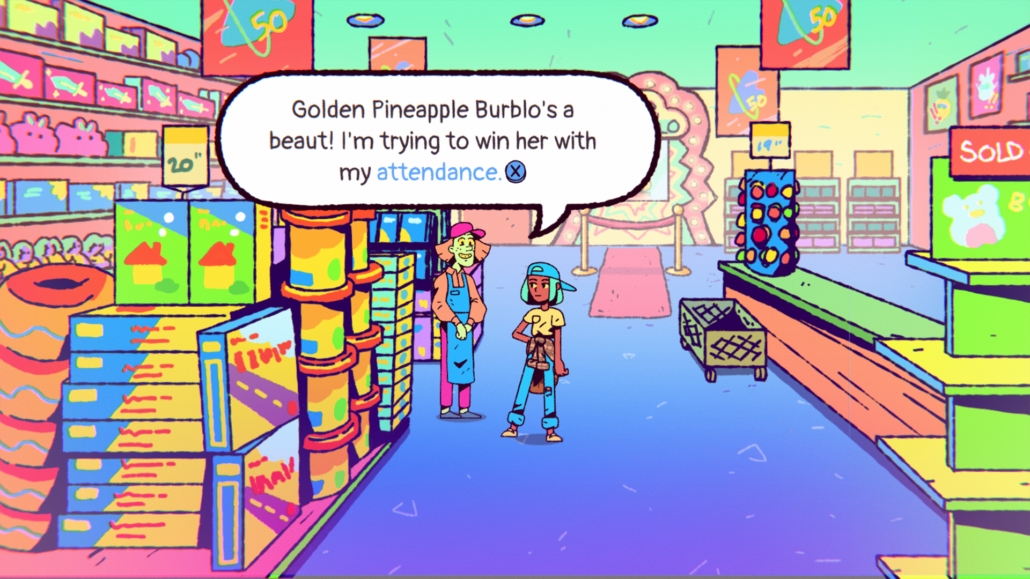 Our main character here is Ali, a teen who decides to ditch band camp after learning that loan sharks screwed their mom’s video store over, and now they need over $90,000 to save it. So Ali has to team up with some older associates who know a thing or two about cons, and travel cross-country in order eventually reach gambling territory, where they can really cash in. So it’s a road trip adventure through a memorable era, complete with all of the visual trademarks of the ’90s. It is left a bit ambiguous as to what part of the ’90s the story takes place in (or if it’s just the ’90s in general), but we certainly get a lot of colorful neon blasts, and it’s used well and makes for some nice and vibrant visuals, with even plaid-only clothing stores feeling a bit more chipper.

What makes The Big Con stand out is its open-ended gameplay. The section I played, which took place in a mall, had one simple goal: earn enough money for a train ticket. How we help Ali get this money is entirely up to the player. Exploring around the nicely-sized mall and its various stores, a few options appear. There’s a sold-out Furby expy that people will by cash for if you can somehow get your hands on one, a promotional quiz contest from a gum company, a pawn shop looking for certain items and an opportunities for some old-fashioned pickpocketing. Some may be easier than others, but those options may require you to take a less-than-ethical path or put yourself at risk.

The risk here was in the form of the mall’s security guard, who can confront Ali if any suspicious actions start drawing attention. You’re able to try and your way out of things, which only works for so long. And you will have to snoop around in various ways, as gathering intel and jotting it down in your notebook is how you learn about the steps needed towards ways to earn cash. Sometimes it’s as simple as talking to people (and pressing certain subjects when given a prompt) and learning about gum ingredients to by used as quiz answers. But maybe you’d prefer to eavesdrop and learn about someone changing at another store, leaving their wallet unguarded. Heck, you can gather the tools for a disguise needed to sneak into certain areas if you’re skilled enough.

It’s simple stuff in terms of gameplay, but works well thanks to the inclusion of multiple options to choose from when it comes to your approach, each presenting a nice variety of challenges. What also helps is the sharp and humorous dialogue, with Ali’s classic ’90s snarkiness being a highlight. While we have yet to see what other areas Ali will be running cons in yet, The Big Con as a whole is shaping up to be a colorful blast of nostalgia that makes for an attractive and fun adventure, and is one to look out for when it comes to PC and XB1 sometime later.