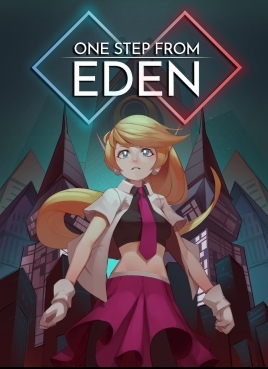 One Step from Eden

One Step from Eden has launched during a time when titles with a plethora of replayability are needed. The strategic deck-building, real-time action title provides a deep time-sink for fans of the rogue-like genre. Featuring powerful spell-slinging action, a nearly endless combination of cards and tons of progression unlocks, One Step From Eden has seamlessly integrated various mechanics to create a frantically immersive tower climb experience. It’s a title deeply reminiscent of tactics we might remember from Mega-Man Battle Network titles with its nearly identical grid design and combat style. What sets this title apart from its seminal counterparts is that it’s a constantly evolving strategy game as well. Not only must you be precise in your movements on the field by dashing around and avoiding attacks, you must also be strategic in the way spells are used and decks are built. There are various classes of spells that can be used in unison or by themselves to create themed decks. From poison damage to frost effects; from wall structures for blocking to actual shield regeneration, it appears One Step From Eden has thought of it all. As you make your way through each procedurally-generated path onto the next level, a vast repertoire of enemies are encountered that have unique fighting styles and strategies of their own. Each boss level is adequately challenging and engaging for a wild ride. And while there is no shortage of death in One Step from Eden, you at least unlock permanent cards for battle and still feel that progress has been made despite any setbacks.

At a first glance, One Step from Eden is a vibrant, colorful feast for the senses. Gorgeous character designs and an upbeat soundtrack set the tone for the game. While it’s not a title that’s devoted to storytelling, you can still get a sense for the magically sci-fi flavor developers were going for. Each of the nine playable characters have their own special abilities, weapons and flavor text. Not only does this give some sense of world-building, but it’s also indicative of each character’s playstyle. These characters are able to be unlocked through progression and you may even meet them on the field of battle as you make your way towards the end-goal of Eden. In my first playthroughs these characters gave me a run for my money, but regardless of where the run is ended, unlock ability cards are still unlocked that may be used in future runs. And while One Step from Eden gives clear gameplay directions, there are also subtle actions the game asks us to intuit that may change gameplay. For example, once these bosses are defeated at the end of each of the eight paths to Eden, you can choose to either destroy them completely with a final attack or spare their lives so that they can fight by your side through special support actions. 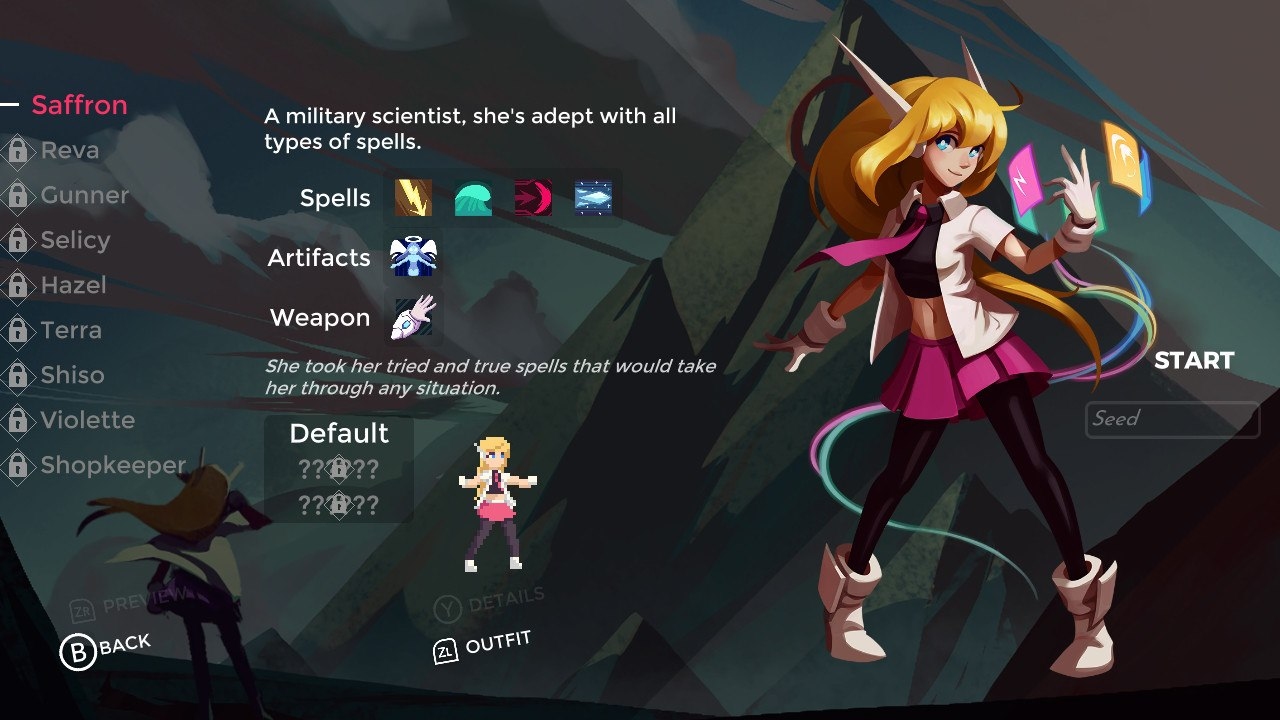 The first character that can be played as is Saffron, a military scientist that is adept with all types of spells. She’s a well-balanced character for first-time players. Each character has different kinds of specialization that make them a master of one or more combination of spell types. Each character features their own flavor text, special loadouts for starting gear and cosmetic outfits. Each loadout also vastly changes the way characters play for variety in approach. Saffron may start with an off pistol weapon for quick, continuous fire that creates quick, darting combat. A future “Chronos” loadout changes Saffron’s gameplay to a much slower pace with pause weaponry.

What a character’s deck starts out with does not necessarily mean it needs to stay that way. As you progress through the various branching paths towards Eden, treasure chests may be encountered with new spells or new skills can be purchased skills from the Shopkeeper (who can eventually become a playable character). Your deck can be supplemented with artifacts you might find or receive from leveling up that grant passive bonuses — from extra life to damage modifiers, artifacts quickly become key to any loadout.  To add to the depth are ten different spell types. While it may seem excessive at first glance, the amount of spells lends itself beautifully to the vast synergy that One Step from Eden promises. 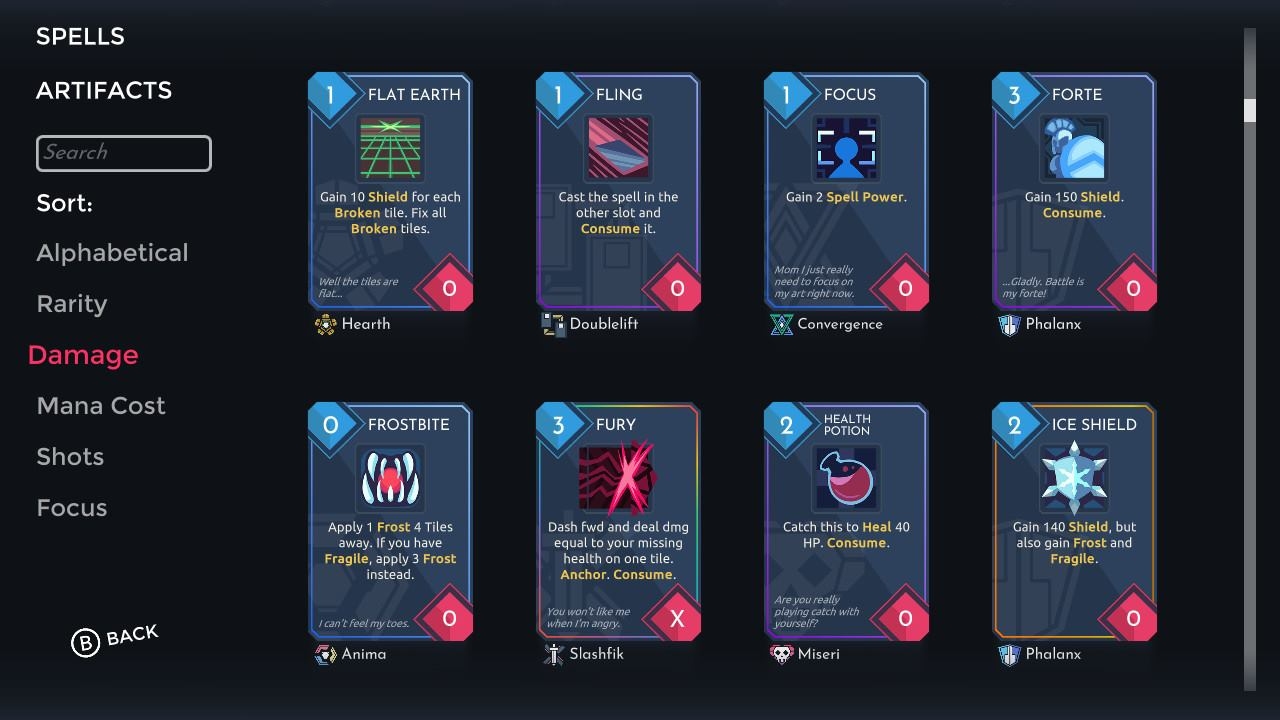 A first look at the title may seem overwhelming for players who may be new to the genre and its layout. The learning curve can be overcome since repetition is the key to both comfort with mechanics and progression. In your first run, you may not realize the effects certain spells have together, but as you progress you’ll pick up spells and test them out for optimal loadouts. Each of the ten spells represents well-known mechanics found in magical strategy. “Miseri” spells focus on agonizing poison mechanics or spells that may damage the user in some way and pay it forward to enemies. “Anima” spells are the traditional elemental spells that apply burn, frost or stun damage from its respective elements. The list goes on to incorporate shield spells, spells with damage over time, spells that control the battlefield and enemy movements, AOEs and even more. Once you do conquer that learning curve, you’re able to mix and match various spells for maximum effects: “Hearth” spells that control the battlefield pair well with “Anima” AOE spells; “Phalanx” shield spells work well with “Slashfik” for a classic sword and board feel. One Step From Eden excels in giving enough information to get players started without it seeming like too much hand-holding. It’s an intuitive title when it comes to its strategies of gameplay.

As strong as One Step from Eden is in its education of the player, you don’t see that intuition carry as strongly as it should in the actual battles. You battle various enemies on a grid field that’s split in half. Gameplay is quick and frantic as totems are summoned, spells are launched and try to dodge everything in between. You have a main weapon in hand that you can attack with. Therein lies a double-edged sword: the game can be too fast sometimes. Its speed of gameplay is what sets it apart and makes it unique, while also creating major balance issues. Those loot chests players might come across have a “shelf life” where they expire after a time and must be destroyed — this requires target prioritization and hoping for a good ability draw (the chests also have a lot of health). Enemy bosses have powerful attacks you may not even have at your own disposal that are rapid fire and in quick succession — this made bosses overpower you in many cases. The pace of the game is what brings out its most fun traits and also hinders the gameplay synergy One Step from Eden was doing so well to provide. Gameplay imbalances are also found beyond the speed too. Bosses will have an excessive amount of life in comparison to you and will be faster and have stronger attacks. It then becomes less a game about skill and one more dependent on luck. 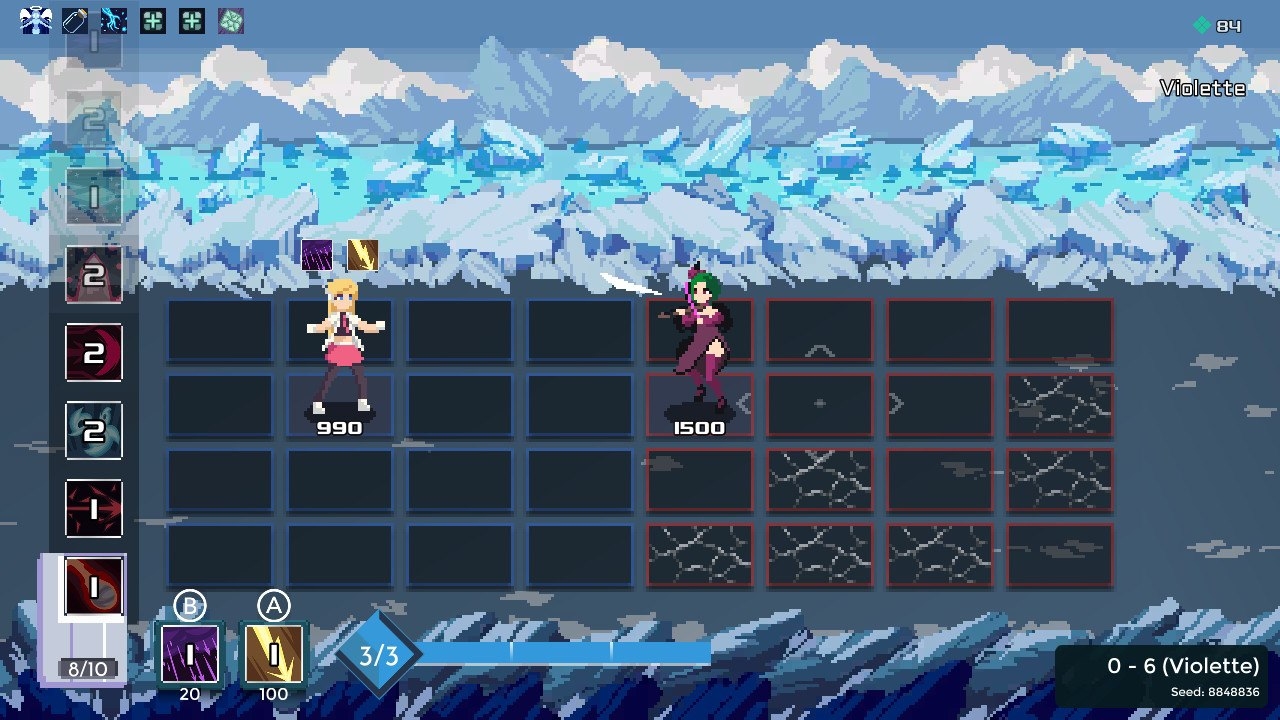 One Step from Eden is an impressive feat of card-battling rogue-likes. It’s visually gorgeous and features strategic gameplay through its library of spells. This Mega-Man/Slay the Spire mashup provides an exhilarating challenge that’s constantly evolving. It’s a title with great replayability during a time when we may need it the most. It’s also another great addition to the couch-coop list with its cooperative and versus modes. The title fits great on the Nintendo Switch’s layout and makes for a great addition to the console, even if at times it felt as if gameplay controls would be smoother on a PC keyboard. Overall, the game does wonderfully in providing great spell variety with detailed abilities that synergize well across the board. Despite the balance issues, it’s still worth checking out for something to quickly get into. One Step from Eden is a flavorful, intuitive experience that’s hard to put down once you pick it up.