For all the advancements we’ve made when it comes to technical graphics and controller feedback, it would be easy to look down on games like OutRun. Despite going on to influence a large swathe of the racing genre during the early-to-mid 90s, to mistake its simple goal and objective as hollow and short-lived doesn’t reflect that game’s appeal. When hardware limitations resulted in a portrayal of the race track — let alone the real world — in rather more restricted ways. Before the time of high-definition resolution, volumetric lighting and particle effects, developers, if not make the manner of racing more appealing, had to approach the idea of spectacle via presentation through other means. What makes Sega’s brilliant 1986 arcade racer so note-worthy was its embracing of those limitations rather than hiding from them. Of having its players, on top of trying to get to each vital checkpoint and fork-in-the-road with seconds left, admire the vast shifts in color its multiple environments had them speeding through. Regardless of how close, or in this case far, it may have been to the gritty, simulation-esque approach to racing that has only gotten more popular this past decade. That’s not to say there’s anything wrong with the set-up series like Forza, Grid and WRC all aim to perfect.

But what of the opposite approach, of which needn’t have to rely on being set in far-flung, futuristic/anti-grav set-ups? What of the kind of 90’s arcade experience that, even when games tried their hand at rendering the world much like Daytona USA offered, was still anchored in that OutRun-esque visage of bright worlds, regardless of their authenticity. Of making things look and sound “cool,” regardless of how odd or obnoxious that may end up being — both in and eventually outside that specific decade. One look at the promotional imagery to developer Lucky Mountain Games and Sumo Digital’s Hotshot Racing should be evidence enough that both studios are going all-in with both that liberty with color, as much an all-too-aware acknowledging that early 3D games are/were as notorious for their jagged, polygonal appearance, before one even begins to discuss gameplay. A fondness for racing outside the viable arena of pure simulation is neither new nor worthy of mention on its own; many studios have tried to encapsulate more arcade-friendly mechanics complete with a gimmick or two to stand out with mixed results. 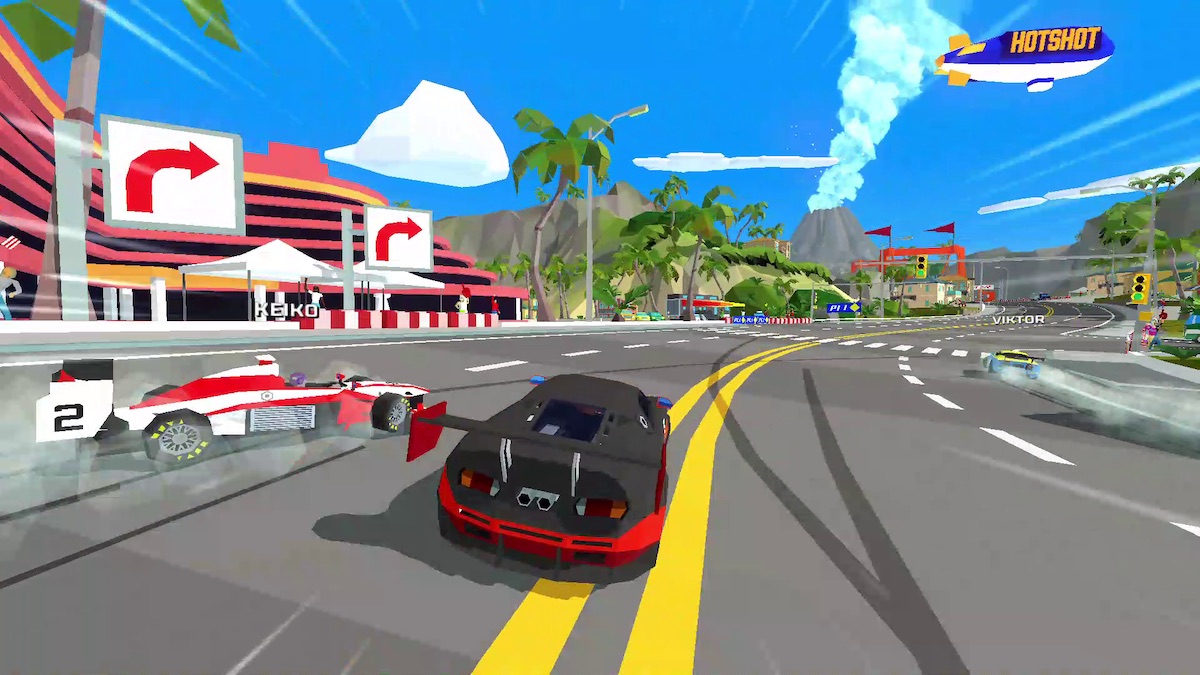 But what makes Hotshot Racing so worthy of discussion — why I was beaming with a large smile on my face mere minutes into the first couple of races — is how easy and terrifically so it latches onto that 90’s ideal. That era’s unhinged fear of how it may look to an outsider. Right from the off with its bold, chunky user-interface — quickly emblazoning a player’s screen with a character select menu, whereupon you almost feel like the very polygons could poke someone’s eye out. The developers are skirting the edges here. This is a fearless flashback, topped off no better than by the sheer oddity of certain characters’ wide, puncturing grins and the option to customize cars by simply adding a voxel or two to the side. Hotshot Racing doesn’t end here though; this embracing of a less-than-graceful age of 3D graphics is just the start and better still, it’s not the kind of game where its appeal simply lives and dies by its aesthetic. Hotshot Racing is a welcomingly odd presentation, but it’s a cleverly tactical one too. Even if its general presentation would have you believe it’s all surface-level.

One of the key gameplay mechanics that plays such as vital role in one’s experience is the temporary boosts you acquire by drifting around corners. Spend long enough doing this — or even managing to get enough slipstream behind another car — and it could be the deciding factor between finishing 1st or finishing 7th. There are plenty of fine lines in Hotshot Racing, punctuated on top by the fact AI opponents — or simply opponents in general — all come across as being even-footed. All using the exact same tactics and long-game strategies to trip you up. Naturally there are an assortment of vehicles to choose from. Cars whose speed, acceleration and even drifting differ from one another. So while the regular conundrum off-track of what to prioritize or sacrifice is present, the real strategy at play is actually on the track, mid-race. How many vital boosts do you in fact bank and save for later periods? Particularly when races can often feel like muscling your way through a huddle of cars colliding with one another and less about picking positions off one after another. 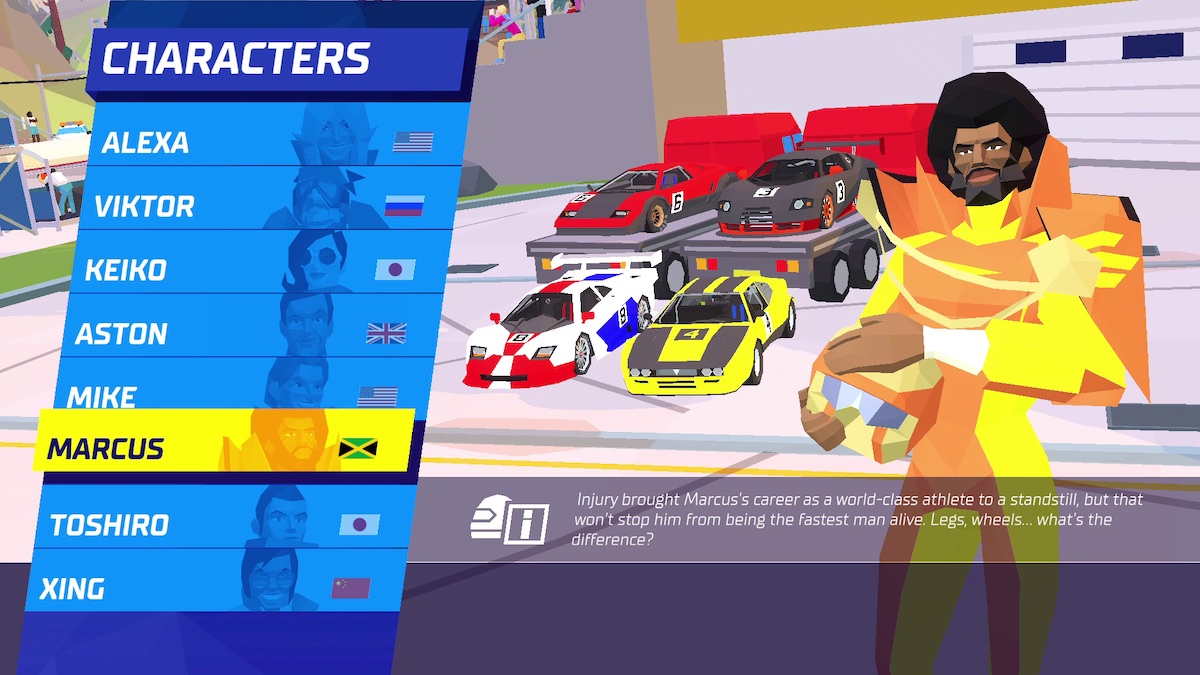 A scenario further helped/hindered by the fact that should you make contact with the side barriers mid-drift, that potential gain to your meter is lost. Even boosts themselves are hampered by one’s previous actions; boosts aren’t some get-out-of-jail-free card should you collide or grind to a near-halt. Use a precious boost at slow speeds and it actually offers little benefit to you. In all honesty, it’s rather surprising how well such a simple gimmick — drifting to gain boosts — integrates into the race experience. Particularly once you’ve got a firm grasp of the course layout and it’s up to you to determine how far/much you drift into and out of corners. How well you want that race-line to be so as to potentially maximize that gain in your boost meter. Do you even dare drifting while boosting, especially around those tighter, hair-pin corners? Again, Hotshot Racing isn’t trying to simulate or match any level of authenticity with its physics, yet there’s enough of a risk factor involved for the relatively basic control set-up to reveal itself as having a touch more depth than you’d initially have expected.

Even when the dreaded issue surrounding rubber-banding opponents sadly crops up from time-to-time (a consecutive use of one’s boost three times and yet the AI still manages to catch up and overtake me?), the opportunity always seems present for the tables to turn once more. First place seldom feels secured once you move out of Normal difficulty, but neither does the back of the pack seem like a pit one can’t climb right back out of. Take all that away though and you still have a bright, eye-catching game whose novelty with jagged polygons doesn’t still find time to treat us to some pleasant use of color. Desert surroundings indulge in grand expanses of oranges and yellows, while the green palette of forest-themed courses is ripe for some explosive contrast of other shades in certain parts. The early-3D aesthetic is one thing, but Hotshot Racing recognizes that the feel-good vibe of these types of racers is deeper than that. 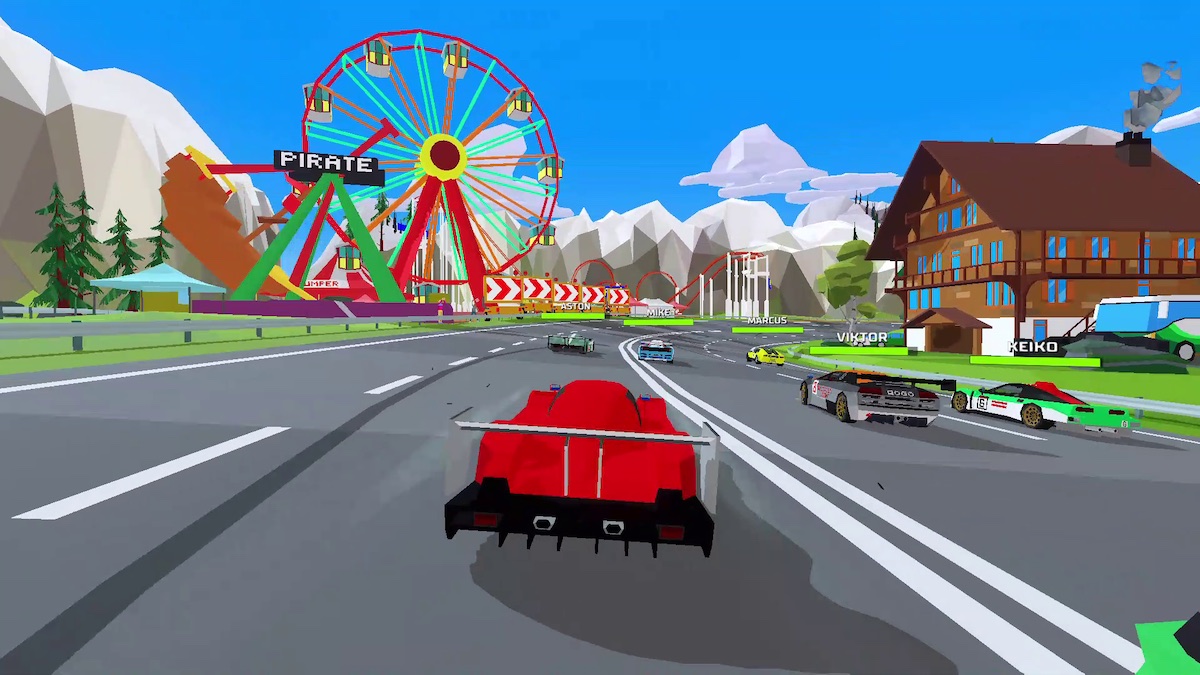 Whether it’s the artistic touches or simply the announcer providing us an introductory lead-in prior to the start of each race. Even the many one-liners and quote-unquote jokes each racer offers up mid-race are but another crucial part of that aesthetic. Whether or not you laugh at any of them is neither here nor there; it’s been a while since a game has leaned so heavily on such things like national stereotypes, you can’t help but give the developers some credit for that commitment. The posh, upper-class Brit remarking on how it feels good to be “back in the one percent” or the lone Russian making his love for electronic music all too clear. Hotshot Racing is all too aware of how dumb all this may look and cares not one bit about the response.

That bold self-awareness and embracing of its genre’s colorful and fearless past is why Hotshot Racing has struck such a chord on early impressions. It’s a shame that, in previewing this, one has already seen all there is to see when it comes to the assortment of race tracks on offer — 16 courses total, with even some of that limited selection mere alterations on the same environments. Though the promise of additional modes on top of its conventional Grand Prix/Quick Race/Time Trial outfit, as well as an online component, may mitigate some of that concern over the game’s smaller stature. Even so, to commit so proudly to this “retro” aesthetic, there needs to be a secondary hook to fall back on, to compliment and avoid any suspicion of this being all about the surface-level detail. Fortunately the game has that in the form of its interweaving a strategic use of drifting so as to guarantee victory. But perhaps the most surprising element of Hotshot Racing is indeed its pride on what racers were during the 90s. It’s a blast from the past that the game doesn’t shy away from. Admittedly ridiculous at times, maybe a touch over-the-top with its flaunting 3D’s early, jagged look. But reflection on a simpler time — of a fond arcade vibe where worlds were brimming with such pop-like positivity — is what matters and Hotshot Racing looks to offer that with a fitting visual style to match. Big, blocky polygons and all.