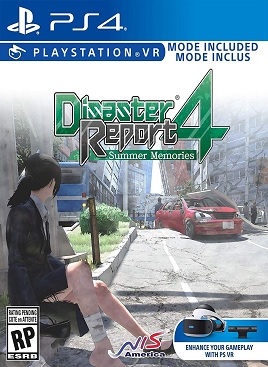 It’s been a while since Western audiences have seen a Disaster Report (or Raw Danger!) title, a series centered around surviving devastating earthquakes. Irem’s PS2 titles made a small splash when they were localized, but it wasn’t enough to justify sinking the money into bringing all of the titles over. Then, right when Disaster Report 4: Summer Memories was getting set to launch, a real earthquake struck Japan. Considering that the game is about navigating a Japan reeling from a major earthquake and its aftershocks, developer Granzella Inc wisely demurred on releasing the game. Fast forward to 2018, and the game finally saw its release, ported to modern platforms.

A couple of years later and it’s the West’s turn to try to save lives. Considering the current situation that is rollicking the world, it’s a sour sort of coincidence that the game should see a western launch now. When it was originally ready, it would have been in bad taste to release the game. Now, with a pandemic where the best most of us can do is stay the heck out of the way, a game where players can take an active and altruistic role in assisting other people sounds like the panacea the populace needs. Of course, this is coming from a series newcomer who watched the trailers and thought he knew what he was getting into. Certainly, people familiar with the previous entries are getting a laugh at this naive belief once held.

The game makes a terrible first impression. After an (admittedly decent) intro where the quake strikes, players are thrown into the fray to discover some serious tech issues. The framerate is abysmal when turning, clipping is more likely to occur than not and the animation of the player’s created character seems to take more cues from the Ministry of Silly Walks. On a recent model PlayStation 4 Pro, the fan spins up noticeably, leaving one to wonder of the cacophony that would be created on a model that has fan noise issues normally. The game chugs and hitches, while load time are frequent and lengthy. Considering that this is a title made for the last generation, and there doesn’t appear to be any graphical wizardry to justify these problems, it’s safe to say that the game was poorly optimized for recent hardware. 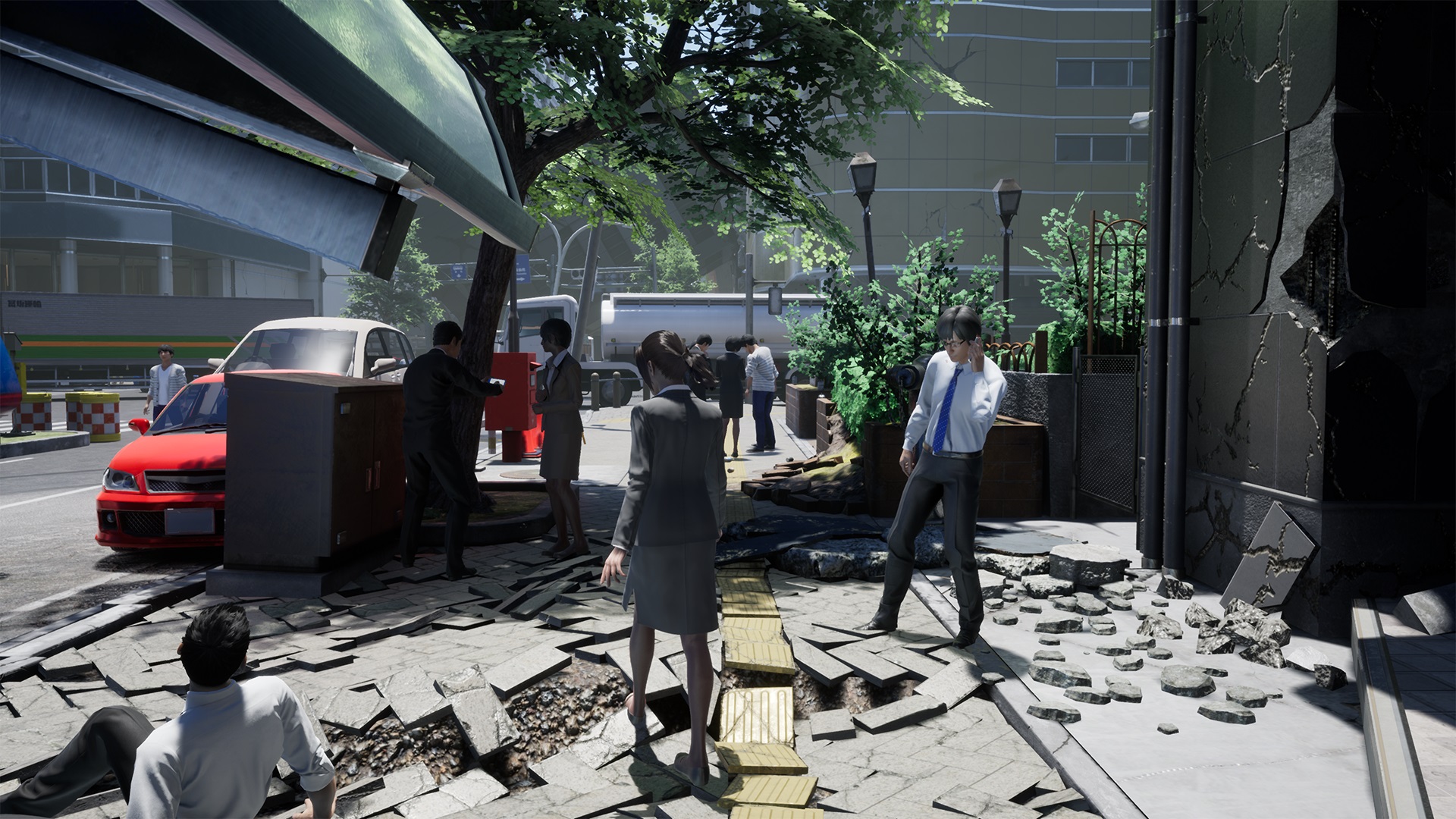 Then there’s the design. When starting off, the game takes great pains to tell the player that this is their story; how they play the hero or villain of the tale is entirely up to them. This is absolutely not true. The game is closer to a classic point and click adventure game without the “point and click part.” This means running around the environment, talking to everyone, in hopes of triggering the next event so that progress can be made. In practice, this means that the player must take actions that would fall outside of the morals of the character that was created, such as the upstanding and honest hero having to impersonate the son of a company president to trigger the next scripted aftershock, opening a new area. The challenge lies not in how to solve a situation in a way that follows an ethical creed, or delving into gray dilemmas where there isn’t an absolute best answer. It’s more about trying to determine if the way forward is one that allows player agency or if it requires to the player to follow a strict checklist.

Even what can be done by the player is underwhelming. A person can have their legs trapped under a large piece of concrete, with paramedics trying to stabilize the victim and another civilian tries to lift the weight. The player cannot help at all here. Meanwhile, there’s a line of patrons at a convenience store patiently waiting to check out. This is something that can be resolved. There’s another situation where a woman murders a jewelry store owner to rob the place where the player cannot back away slowly and report the incident to a police officer that’s right freaking outside. A cat taped up in a box is trapped, with no way to rescue it. Walking away, with the idea of finding a solution to that scenario resulted in another aftershock triggering, sending the walkway the box was on into the river below. So, that’s a drowned kitty and an annoyed reviewer. 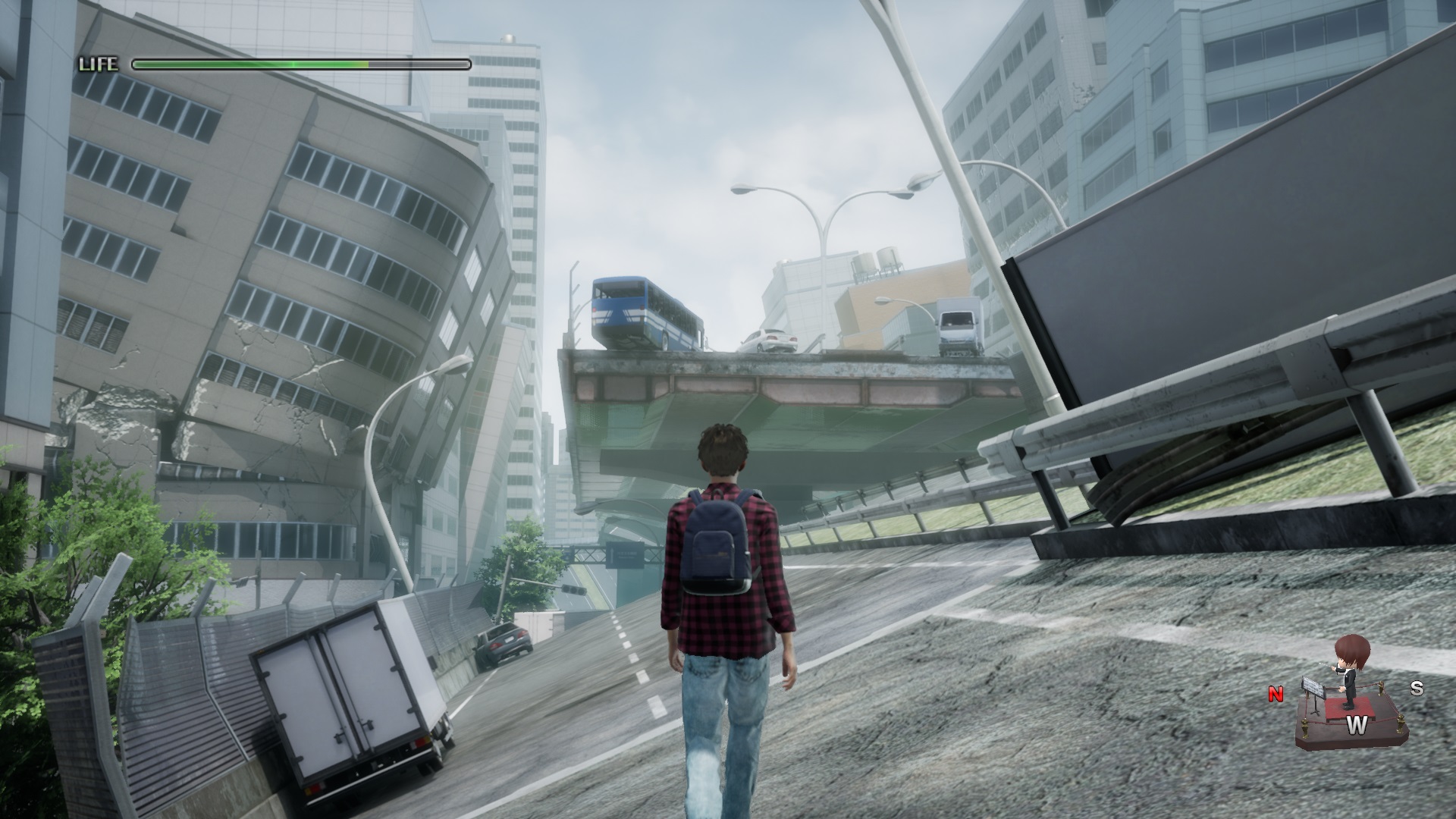 The controls don’t make a heck of a lot of sense either. There isn’t a tutorial, which is fine, but since the game has some differing controls from other like titles, and this is likely to be the entry point for many new players, it would have been nice to have a menu option where these can be seen to help players acclimate. It’s not like the developers didn’t want to put in the work, as the controls are explained later in the game when the player boards a life boat to cross some treacherous waters, long after it’s been figured out. Even then, required actions such as staying steady during an aftershock doesn’t quite make sense, as the player can still stumble even when trying to duck. Considering the gravity in this world has the force of a collapsing star, a light stagger can result in a huge chunk of life off of the bar.

There’s also the frustration of finding needed supplies. Hunger, thirst and bathroom needs are all components of the game, so walking into a convenience store or past a soup kitchen with obvious full bottles of water that cannot be used by the player is obnoxious. Few private spots can be found to relieve one’s self, despite the fact that no one is around, while freshly used areas with ankle high water in full view of anyone are okay. This game’s rules just don’t make sense. 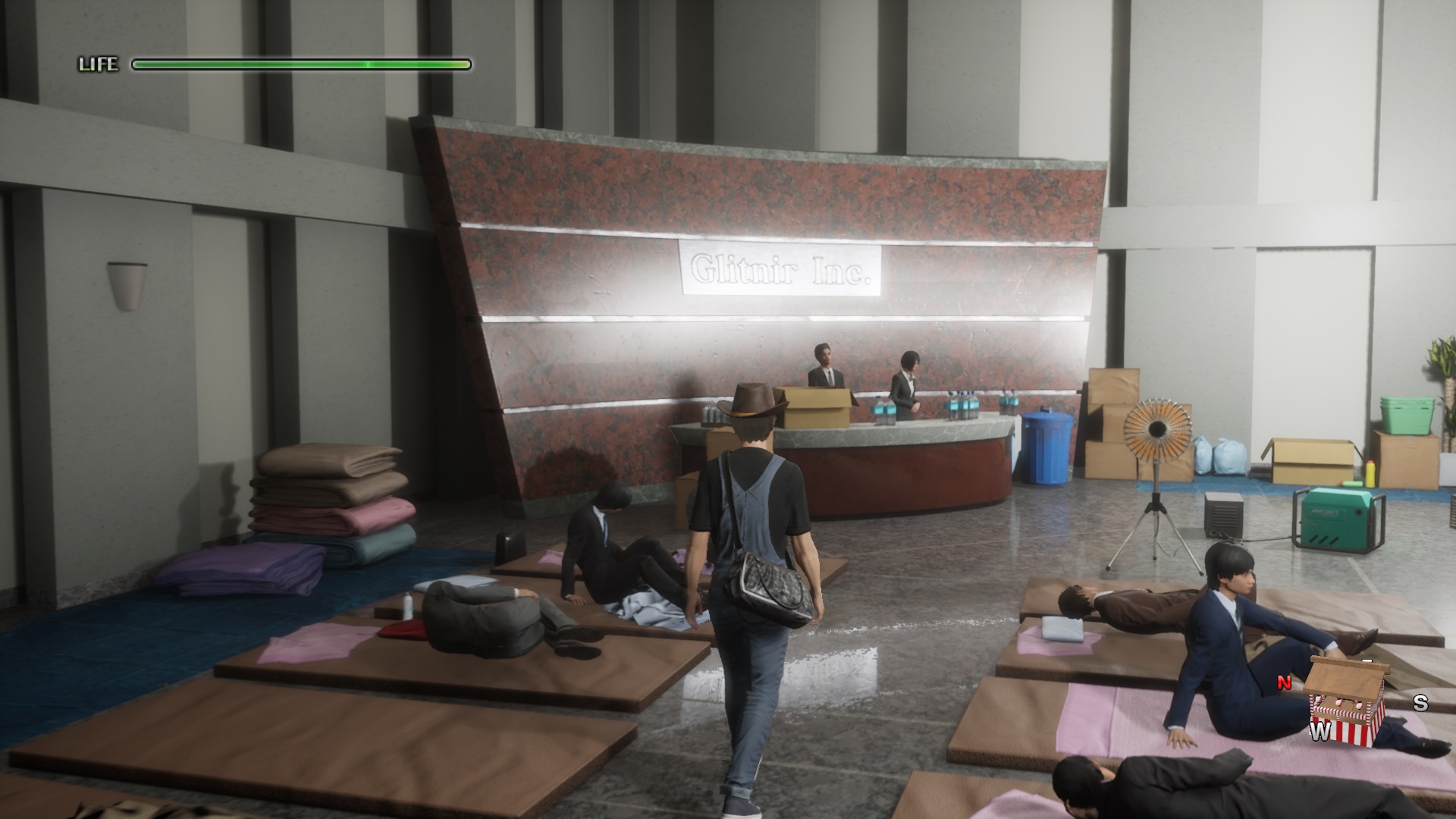 After dealing with this nonsense for a couple of hours, though, something glorious happens. After the long acclimation period and mundane “quests,” something in the writing snaps and it becomes insane. Players will find themselves recruiting for, and then suddenly in charge of, a cult. They will need to help resolve a Romeo & Juliet story with mystery-solving skills involving some of the stupidest, most petty people imaginable. Accidentally becoming a distributor of “miracle water” and subsequently being found out despite all steps taken to be honest is becomes this game’s idea of normal. The writing does play these situations straight for the most part, keeping the winking at the player to a minimum. It’s obvious that the writers know what they are doing, but it’s not nudging the player in ribs, proud of how wacky it is for the most part. It’s just enough to show that they’re in on the joke, letting the silliness play out. Imagine the side stories in the Yakuza series were injected into the mainline tale, or possibly the quirkiness of Deadly Premonition without the bizarre charm of York.

This is what keeps Disaster Report 4 afloat, but there’s a chance that it might come too late and players may write the game off before it shows what it really is. The lead up to this is frustrating, and even after things start getting fun, the frame rate issues and “puzzle” design remain obnoxious. Despite all of this, playing the game does manage to become extremely entertaining in ways that the developer intended. 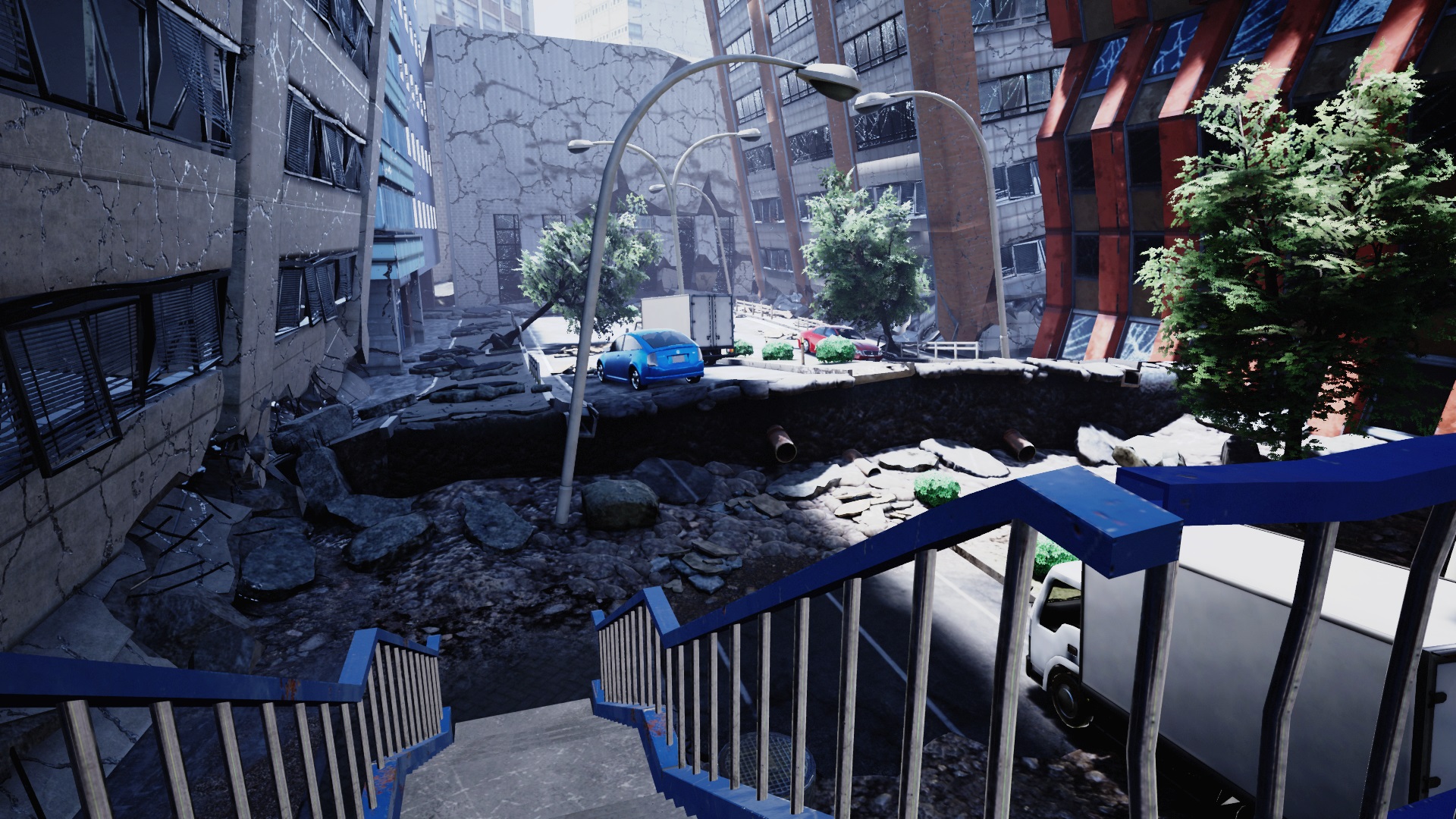 What players might expect out of Disaster Report 4: Summer Memories and what it actually is are two entirely different things. It markets itself as a serious yarn centered around a catastrophe where player choice matters, but it’s actually an intentional comedy that uses the drama of the situations to heighten the absurdity of it all. It’s weird, but in a fantastic and enthralling way. Players with patience and a great sense of humor will come away extremely pleased. Those that can’t abide a laundry list of technical imperfections would be well served staying away. Disaster Report 4 is heavily flawed with too many irritating parts to suffer past, but it still comes recommended for anyone that believes Weird Al’s “Dare to be Stupid” should be the national anthem.