The last time I had been able to experience Maneater in action, it was at E3 last year, where I was extremely impressed with it, enough to make it one of the games I’m most looking forward to this year. That, however, was a hands-off demo. And while Tripwire expertly showed off how you can play as a killer shark and pull off impressive swimming, acrobatic maneuvers and combat, I still had to wonder if the average player would still be able to control our voracious hero(?) expertly. Well, after being given a chance to finally get some hands-on time with it, I can indeed confirm that Maneater is easy to dive into (pun not intended) and plays extremely well.

As mentioned before, Maneater’s plot is told via the framing device of a Discovery-style TV show about shark hunters. As it turns out, not only does this include the narrator/host voiced by the always-welcome Chris Parnell, but the cutscenes go the extra mile by throwing in touches like promotional hashtags, bumpers, logos and more that appear in the bottom corner, much like those you’d expect any TV show of this sort to have. The sense of humor is easily still one of the unique selling points, but at the same time, it still manages to tell a captivating story. Yes, even in a game about killer shark attacks. 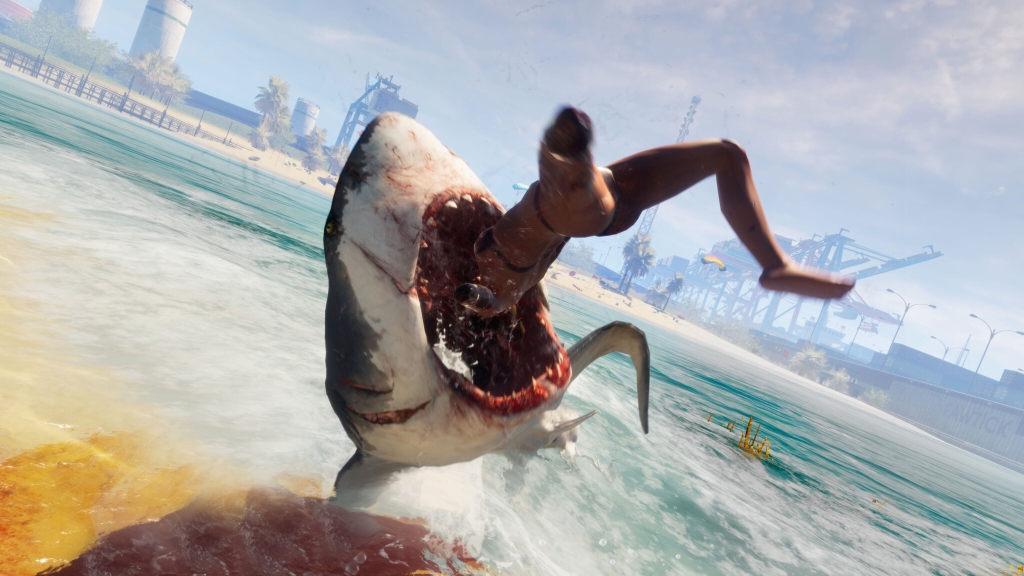 The demo begins with us controlling a full-grown shark, allowing us to get used to the basic underwater controls. You swim, lock on enemies, lunge at them for a bite, and move the right thumbstick to thrash about with your prey. We start out prowling some underwater drains and then we finally get out to explore and start mauling the innocent beach-goers nearby. This naturally causes a panic and attracts shark hunters, who attack via boats while armed with laser sights and armed divers. Thankfully, ramming their boats or leaping out of the water to chomp on the hunters is easy to pull off, but still has a nice challenge level when it comes to executing attacks perfect, especially the more advanced stuff. And then, after successfully vanquishing out enemies…the shark gets killed.

Yep, Scaly Pete, the star of our fictitious TV show, captures you and yanks you out of the water. He’s looking for a specific shark he has a grudge with, it appears, and we aren’t it. Unfortunately, Pete has no interest it letting us go, so he cuts the shark open…and removes the bloody baby shark from the pregnant shark’s insides, with a taunt of “How’s ya momma an’ them?” (while the hashtag #HowsYourMamaAndThem appears to get the audience talking, of course). The infant shark is able to bite off one of Pete’s arms, though, escaping into the bayou. 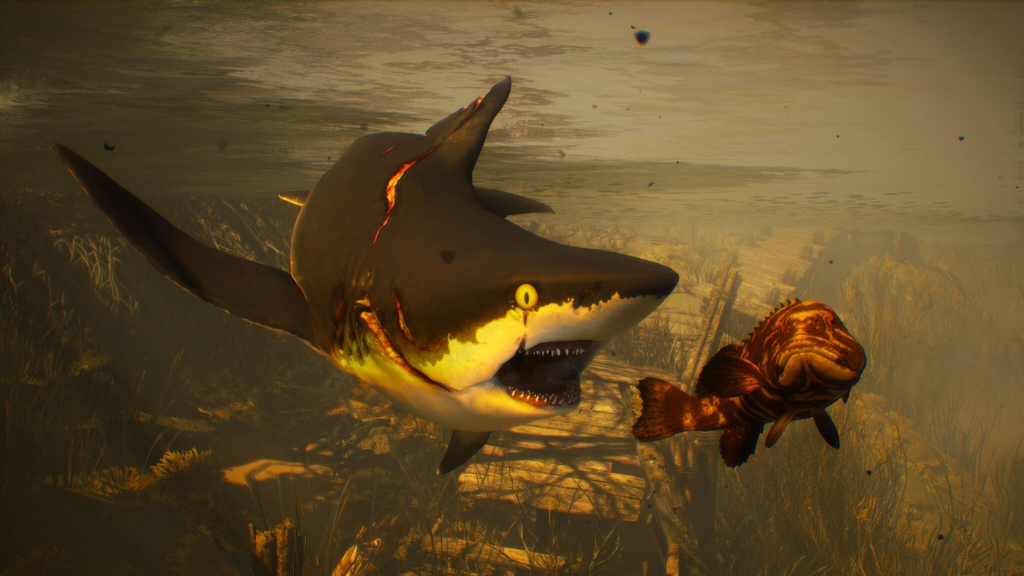 Yes, it turns out the badass shark rampage given was merely the prologue. And now, as an infant shark in unfamiliar, twisted, yet kind of beautiful waters, we have to find a way to survive. This means scarfing down local fish for nutrients and health like before and discovering landmarks and caches to find our way around and gain experience. Maneater makes it clear, however, that we’re not going to be the terror of the seas from the prologue. We’re still relatively low on the food chain and that means hostile wildlife like muskellunge can attack us. This leads to some rather intense duels, making sure we know how to properly evade attacks, using sonar to track their location if they swim away and knowing when to properly go in for a bite. It can take a while to bring one down and it gets trickier when two or more appear.

While the prologue presented only scratched the surface of what Maneater aims to offer, it’s still a superb taste that showcases how getting into the mind of a predator can be fun and simple enough on the surface, but can also still be challenging and tense. It does indeed play as good as it looks and we can’t wait to see our shark’s full journey come May 22.