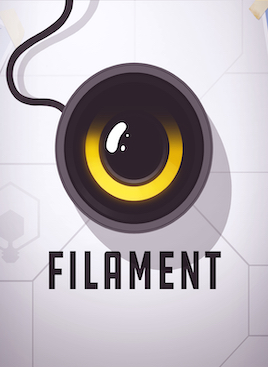 Time and again playing through Filament, you’re reminded of recent games like GreedFall. Obviously not on gameplay or art direction or simply the scale of either title specifically, but on the unfortunate case that its drawbacks are so hard to ignore. Always letting themselves be known, loud and clear. One’s experience precariously close to taking a severe dip — taking more than just the sheen off of what has been an enjoyable trek thus far. Despite something like a technical hitch or a story beat that doesn’t resonate (if work at all), the game still manages to come across as fulfilling. Continuing to pull you back in to see what other challenges await you further down the line. Naturally, puzzle games are one long unveiling of seemingly-impossible hurdles to overcome and increasingly-complex solutions that are one step from being deemed entirely absent. The real joy of Filament is how exactly the game unveils its many tricks and turns.

A game that any enthusiast of the genre can so easily sink anywhere between 25 and 30 hours into, as I’ve done over the past couple of weeks. A game that can so easily start at a self-assured mere hour of investment, to then so easily slip into two, three, maybe even four hours per visit. Like so many recent greats, Filament‘s initial appeal is its core concept: a game that excels on a single basic premise that is threading individual nodes together. The surrounding visual design and presentation might not seem all that appealing — given the main puzzle rooms themselves, outside of one or two aesthetic touches that tie into the theme of that given “rule,” are plain. But for a game that so quickly and easily burrows inside your head, the minimal approach to the environments don’t end up that much of a detriment. The treating of UI and the occasional popping-up of text both give a slightly-distracting Early Access-esque vibe of placeholders likely to be replaced (but sadly aren’t). But that only speaks volumes to how effective developers Beard Envy are that such oversights, by contrast, are easy to discard in the long-term.

Because for all assumptions you may have going into this, it’s surprising how substantial Filament feels. How much time one can sink on even a single lot of puzzles in this game. Particular sequences — often linked by cables in the environment, whereupon players must complete a series of [usually] five puzzles, before they can move onto the next — cleverly-orchestrated and unique enough to take up a possible hour each. Filament makes no apology for thrusting players immediately into the deep end; finishing the first few introductory puzzles finds players then let loose aboard the spaceship setting. Outside of the last area — where the game does that cunning thing of combining two, even three individual rules per set — and a couple of doors whose solution can only be found after unlocking other areas, Filament lets you freely hop back and forth between different puzzles. Find yourself unable to solve one puzzle and you can simply go off and do something else; Filament offers plenty of flexibility with progression and while your task remains to restore power to one vital part of the ship, every solution solved feels like genuine advancing towards the end goal. 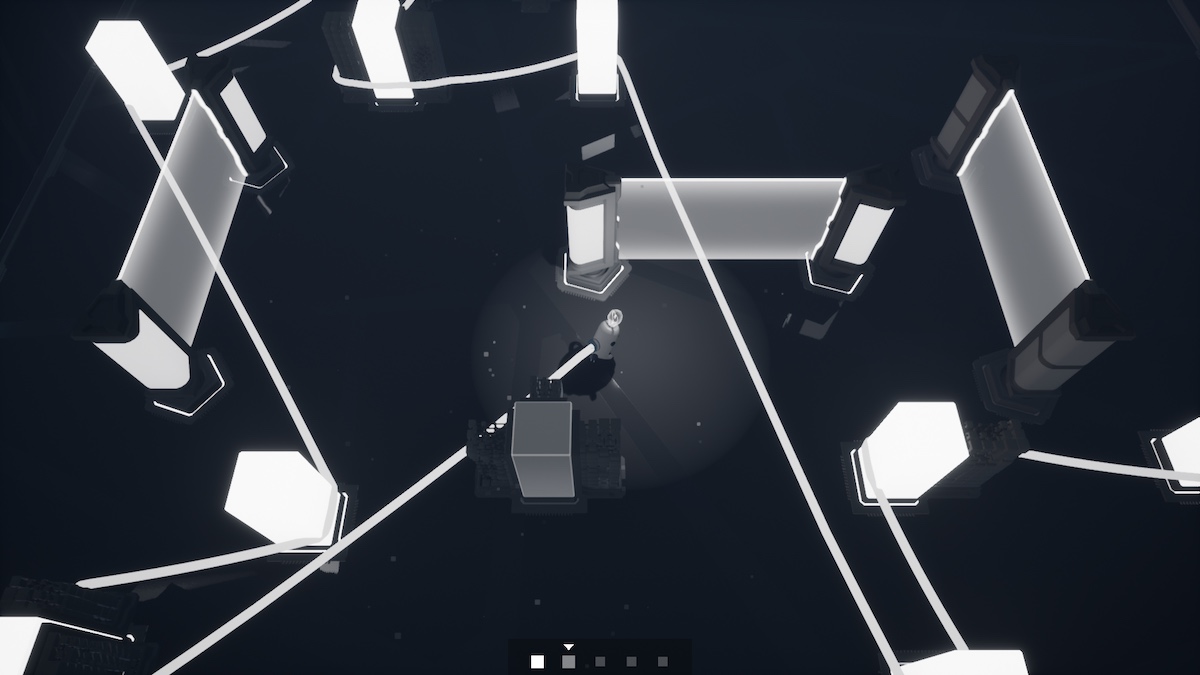 Of course, how different players will progress and achieve victory (and at what pace) will naturally vary. Filament is, again, one of those uncanny cases where slamming your head figuratively against the same puzzle for half an hour bears no fruit. Only to then come back to it a while later and solve it in a few tries. That nature of personal progression can at times mean that latter “more challenging” puzzles are solvable likewise on first/second go — it’s odd how many 4th/5th puzzles were figured out in mere minutes — yet regardless of your own success or road to completion here, you can’t knock Filament for squeezing every drop from out this concept. From out its many threads and lit-up nodes alike. Perhaps the reason for this and why Filament is a joy amidst the [positive] frustratio lies in how clever some of Filament‘s puzzle design is. How, as noted, the game maximizes what is such a basic set-up as threading nodes to create some truly devilish routes forth. If you wanted to be pedantic, maybe it doesn’t hold as much the impact on reflection as an early statement like: “oh, you’re just drawing lines”.

But even so, for a game where “oh, you’re just threading cables,” it’s impressive how direction, angle, tension and the like play into proceedings. Without spoiling any of the solutions themselves, Filament jumps from deciphering nearby, partially-obscured diagrams; to avoiding certain nodes so as to not deactivate the power-line of your little droid; activating specific colors to then neutralize said color together; there are even sequences that require you to walk over electric panels at a certain angle on top of weaving nodes together. While most rules or gimmicks are given sufficient time for the player to grasp, it isn’t long before puzzles crank the difficulty up. Admittedly there are some puzzle types that aren’t properly explained at the start and many players will succeed by accident or find that brute forcing their way still yields a result. But aside from these rare instances of miscommunication, Filament does an excellent job at easing players from a state of blatant obviousness to subtle suggestion. All the while, more impressively, still leaving room for those rules to expand and evolve — some of which the player is required to discover for themselves. Without any of that former implication — an aspect that leads to many of those wonderful eureka moments. 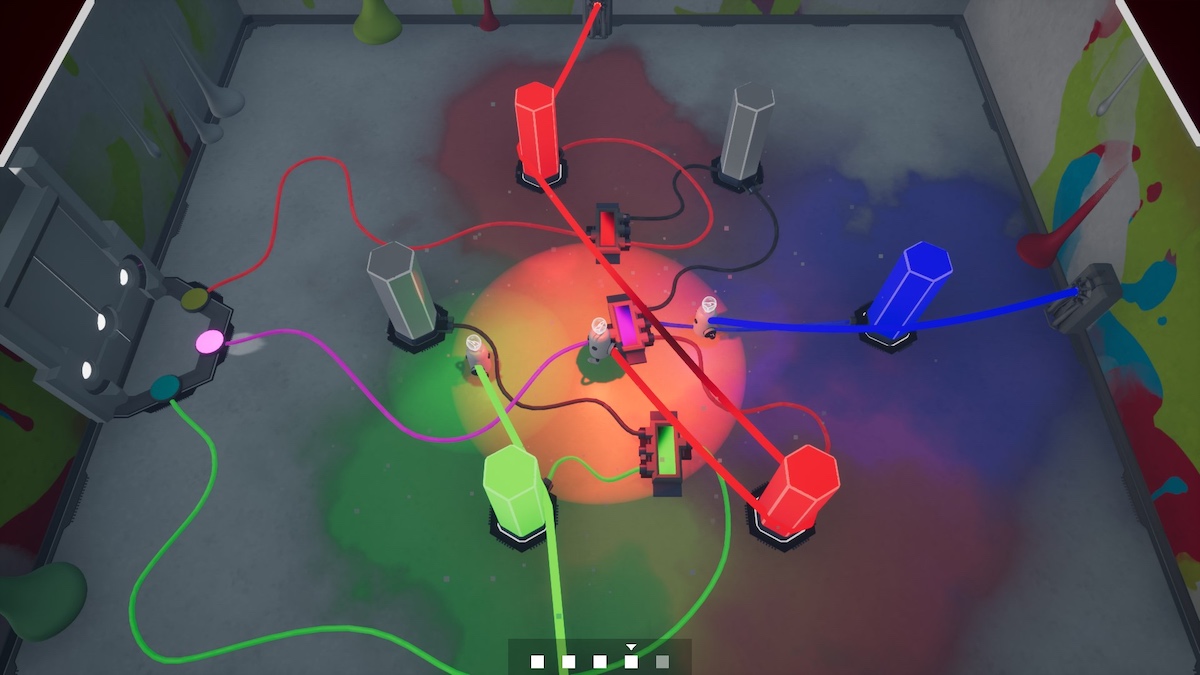 What starts as simply threading two or three nodes ends up being a mind-numbing web of threading two dozen elements. On top of avoiding other nodes, whilst also abiding to some other unrelated, underlining rule present. A situation that states nodes of differing colors must be equal to one another…but never implies they can’t each be more than one of that particular color. And that’s long before the final area of the game where all such logic and deduction is doubled/tripled in scope — players once more required to experiment in order to see how far that base rule can go can be pushed in fact. It’s only around half-way through the content, once you start exploring the far corners and upper floors of the ship, where Filament‘s real joys as a puzzle game come to flourish. The frustratingly-clever trick of any great puzzle game is in the ability to simply add one mere element or shuffle an element around, for the solution to feel evermore distant. Soon, it becomes clearer that for a game all about threading things together, part of the method behind solving these puzzles is in deducing which nodes and components to use and when.

Parts that are closest to the exit may or may not be the last piece; seemingly unimportant, square-shaped pillars may in fact be vital late on and not to be easily expended. A notable highlight is in how Filament emphasizes the need to retread and backtrack one’s movement — how an already-thread route may in fact be valuable late on. Or how simply the layout of certain nodes are a subtle indicator on the direction or angle one has to move in. There are so many small little details present in each puzzle, all the while making sure to reinforce the need for players to think multiple steps ahead. To work out which areas and spaces mustn’t be wasted. Which parts will help them escape the eventually-convoluted mess of wiring. A far more head-banging dilemma when the trick of controlling more than one droid comes into play and (again without spoiling anything), how the game subverts its treatment of light/color. 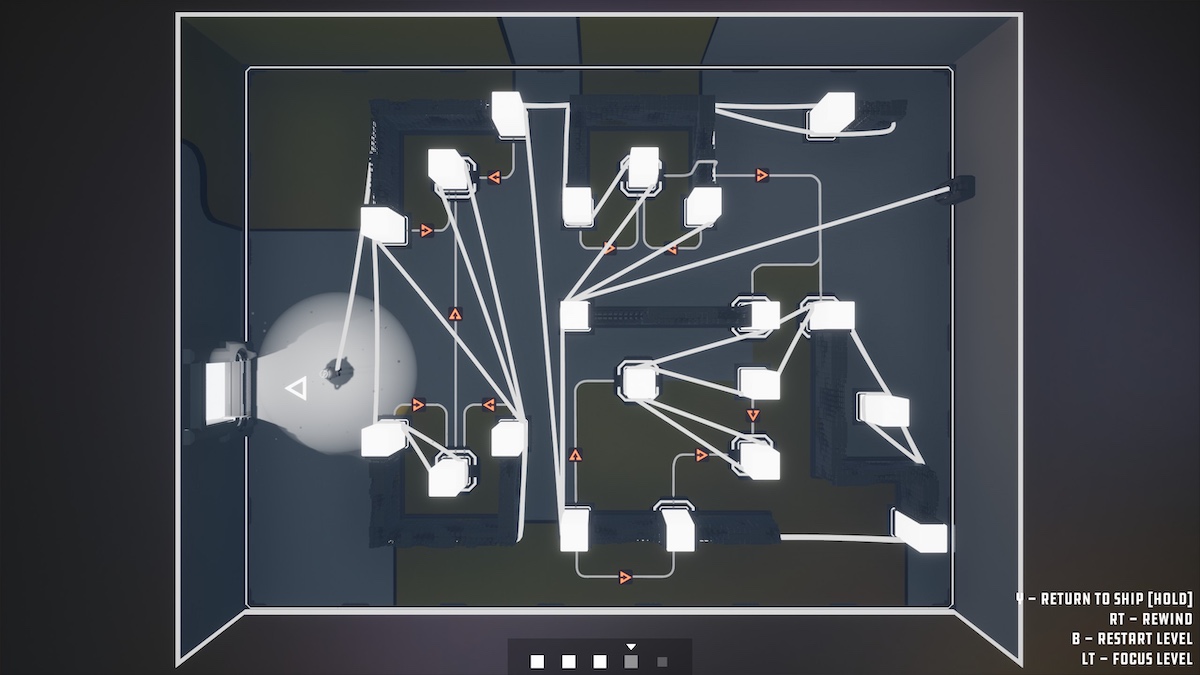 It’s genuinely impressive, and as a result, an elation once you finally see the back of these puzzles. But it’s that frustration of having spent so long on even one puzzle where the long-term appeal shines. So long as we’re talking solely on the vast array of puzzles themselves to spend time over. Because it’s the other, unnecessary investments where the previously-alluded drawbacks clearly show. It’s a shame that such a large effort is placed on the story — and that the overall objective is, fittingly, woven in with the narrative at play, because in general, both the delivery as much the many text-logs to find are not that fun to trawl through. Inevitable it may be that spending so long on the puzzles, you end up becoming so disconnected and forgetful of the finer details. The overhead female narrator constantly spouting brief snippets of back-story — some, fortunately, are tucked to the side through optional engagement — all of which are neither interesting nor coherent to the extent you feel like you’re building up a bigger picture.

Outside of the puzzles too, other such collectibles can become a needless spamming of buttons, given how obscure it is what is and isn’t an object one can interact with. A highlight of sort would’ve greatly benefited. Collectible passwords — of which provide some small if simple add-on puzzles — and those rewarded after beating a sequence of puzzles sadly serve little else than to provide mounting text logs. Logs that, again, are so randomly dispersed it can be hard to even begin to care to piece together the origins of what exactly has taken place. It can get so grating, the one key story-beat in the game — the moment that’s meant to invoke shock, as the narrator so desperately conveys — loses any of its implied emotional punch, simply because of just how alienated the story and the gameplay are from one another. Again, this may well be a consequence of how engrossing the puzzles are, but it’s made worse by Filament wanting its narrative to feel as substantial and as vital, but unfortunately spends little (if any) time working a way around the likely progression players will no doubt go through. It’s a disappointing, apathetically-felt investment from the developers that plays too big a part for it to go unnoticed. 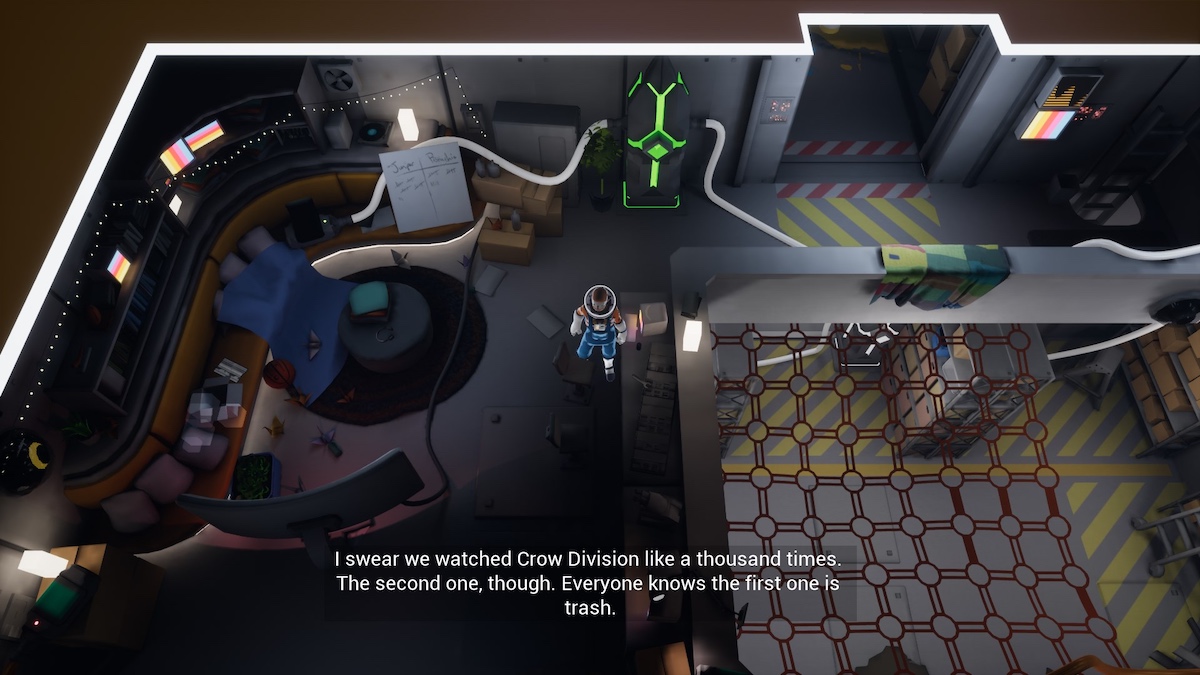 It’s unfortunate that such a shortfall with its story, its delivery of such and the utter lack of reason to care about what’s going on, is so evident. Despite the initial prejudice that its art-style, environments and even gameplay premise may generate, Filament quickly proves any doubters wrong with what is a splendid and fantastic array of puzzle design. Laying claim to it possibly being the best puzzle game of this year period. From the sheer variety of ideas the game conjures, but also the ways in which it doubles-down on these ideas, to subversive length. To the sinister incline of difficulty it poses during each of its stand-alone sequences, while some may be put off or discouraged by its early spike, Filament is a game whose seemingly small-scale stature hides a substantial and surprising amount to invest in. So long as you’re willing to stick with it and to not take its early declarations on rules and boundaries as some absolute end. From the sheer variety of rules it plays with, to the way solutions themselves are mapped out, Filament is one puzzle game you can not, and should not, underestimate.