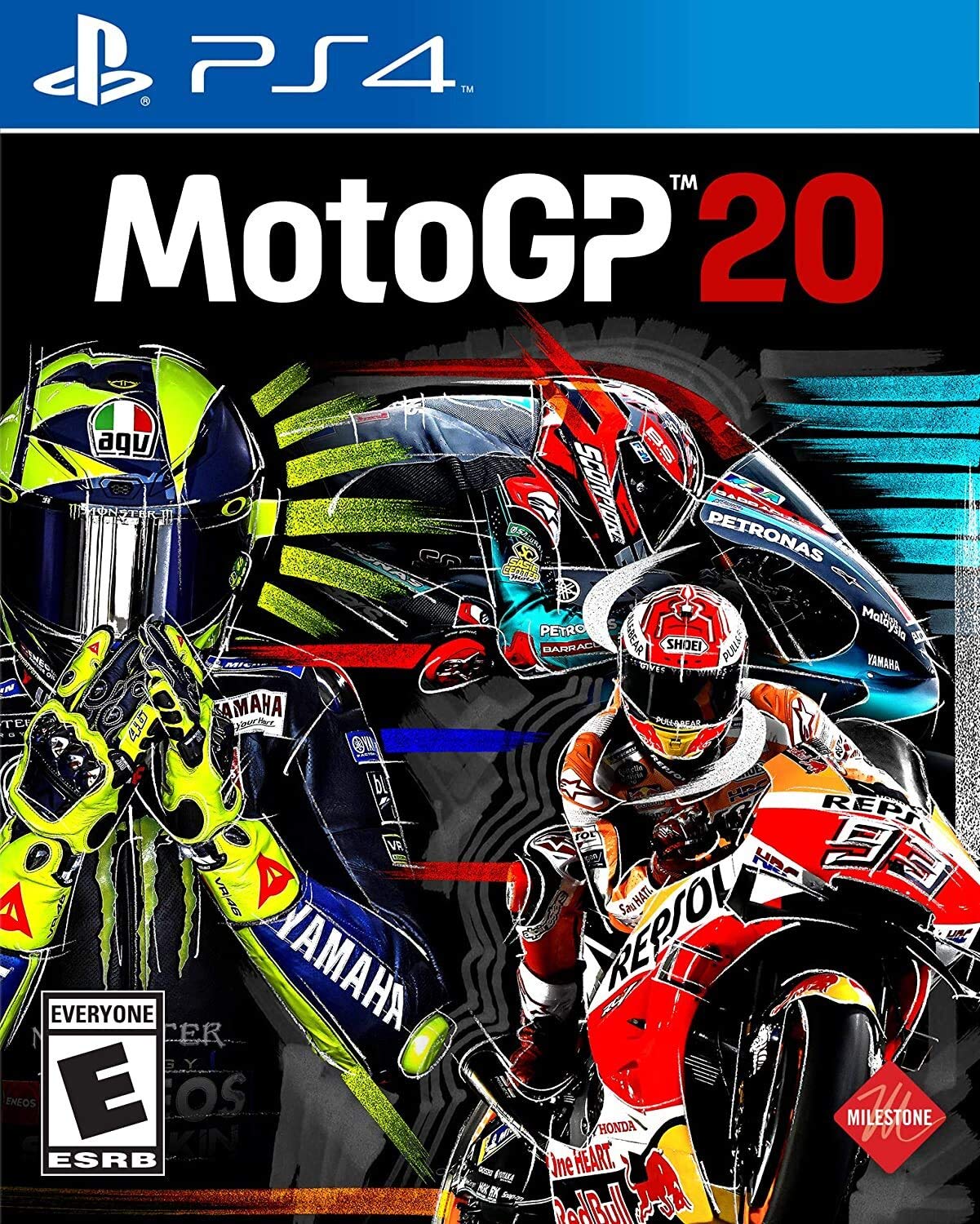 Milestone surprised a number of the MotoGP series fanbase last year with MotoGP 19. The presentation and realism went beyond any of the other games in the series as it became a quiet contender for racing game of the year. With such a large leap with last year’s title, how do you build upon that? For one, there’s a new core to expand on. The other portion is providing new meaningful content which Milestone has done with MotoGP 20. This series still has elements that I wish other racing titles had. More or less, a lot of improvements with the game are taking place behind the scenes. The result is that MotoGP 20 is the most polished game in the long series to date.

The core of last year’s game does remain as it feels familiar at first. The presentation and the introductions carry over, but there’s much more beneath the surface. The racing takes more of a turn towards realism in MotoGP 20 as players will be managing and monitoring tyres and fuel. Similar to Codemasters’ F1 series, there’s more to racing then just learning the breaking and accelerating points. Tyres will need to be at sufficient temperatures to help manage grip. The other portion of tyre management is the degradation. The more hard a player is on their tyres, the more a tyre degrades. This means less grip. This is more important to manage on longer races. Fuel is another portion of the bike that needs to be managed. The more fuel that is put into the bike affects its speed due to the added weight. It will make the bike more stable if it has more fuel and allow for pushing later in a race. Otherwise, MotoGP does not allow pit stops for fuel, so if the player isn’t careful they can run out. It’s all about finding the proper balance.

Braking has also been improved to provide a more realistic experience. Players can use both the front and rear brakes jointly but judging speed is important. When entering a corner too fast and just jamming on the front brake, the rear end of the bike will lift. It also seems the rear brake is much less help other than stabilizing the transfer of the weight under hard braking. One physical aspect that seemed to be omitted is the inclusion of monitoring the brake temperatures. If tyre temperatures affect racing, so does brake temperatures, which is a strange omission. The focus on riding these bikes, including real life, is to be as smooth as possible and clearly the focus is here. Being impatient with the bike will cause it to wobble and become unstable. This again showcases the need for finding the perfect balance while maintaining speed. 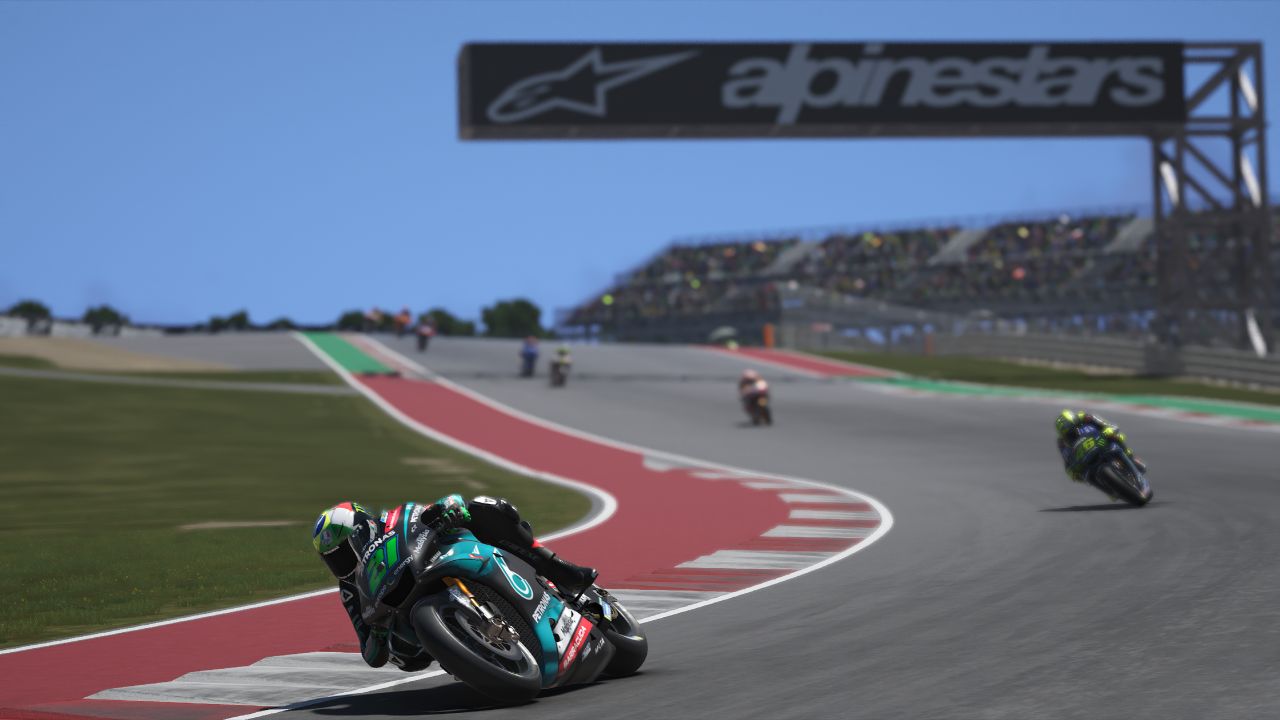 These elements are all a lot to consider, especially for newbies or players who don’t understand the technical side of the sport. Elements such as traction and stability control can be adjusted on the fly, but if someone doesn’t know what the acronyms mean in the HUD during a race, they will surely be at a disadvantage. Much like a DRS system or a Push-to-Pass, there’s a power option during the race that will allow for better fuel strategy or to make up some time. Nowhere in the game does it tell you these things, and again, there’s no tutorial for players. A course on how to approach corners and the priorities of racing would be important as MotoGP 20 maintains that extremely steep learning curve for new players. So expecting players besides the MotoGP gaming community to know about adjusting traction control and the power unit on the fly is a problem. Traction and stability control cannot be adjusted in the menus of the game. On the flip side of this, the assist options that are featured in the menus cannot be changed during a race, which can be frustrating.

The last overhaul to the physics comes in the way of the aerodynamics of the bike. Damage is accounted for and every bit of design from the body and the chassis on these bikes are meant to be as aerodynamic as possible. Players will have an indicator if damage occurs from either dumping a bike or running into another player. The bike will show off scuffs and scratches, but not really any dents. Damage will also affect the motor and performance will take a hit. The aerodynamic damage will cause the bike to be unbalanced or to sway one way or another. Milestone did an excellent job of implementing all of these physics factors without being overly complicated with them and also to showcase noticeable changes to the bikes whenever some aspect of it changes. 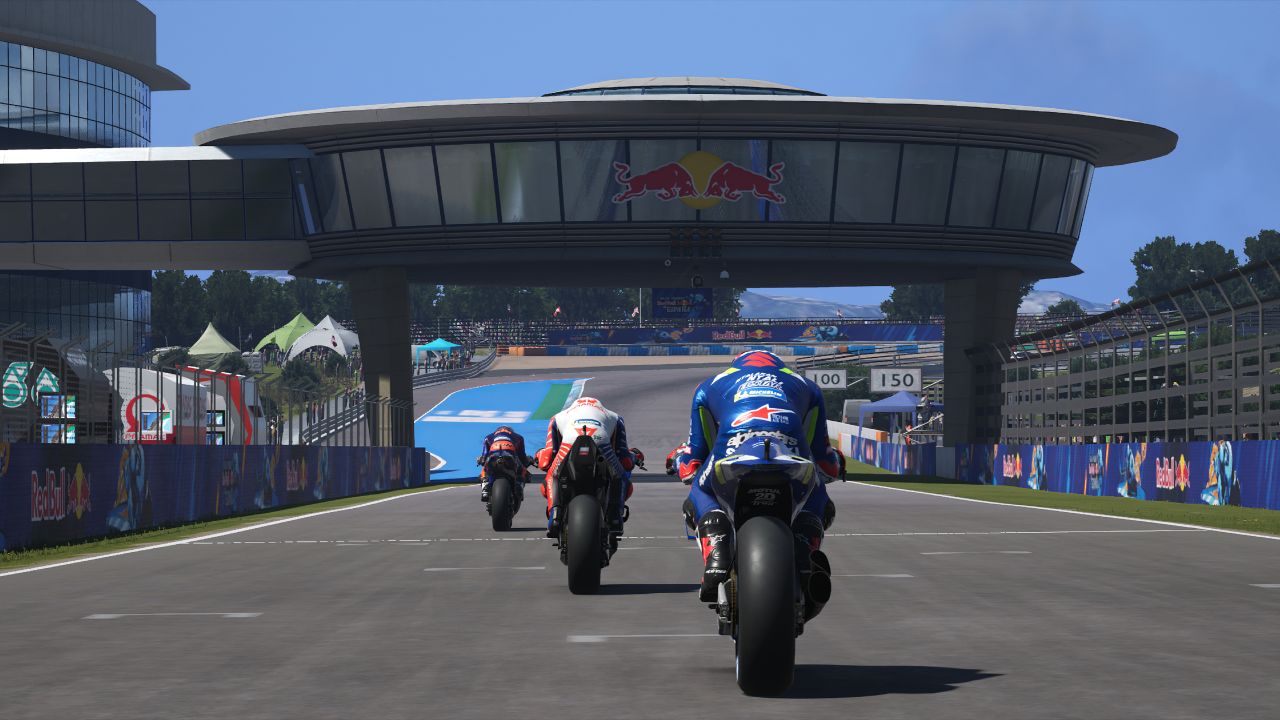 The actual racing does feel improved along with the A.N.N.A., the Neural A.I. that was introduced last year. This is a machine-learning artificial intelligence and while this has improved, it’s not without its shortcomings. The evolution of seeing the A.N.N.A. work throughout a longer race is impressive. The pack will eventually spread out and you’ll witness some riders wobble, bump or wreck. Some will be more aggressive than others. Most importantly, the A.I. does seem to account for the player’s existence this year. There are some questionable times, though. A.N.N.A. has evolved to take into consideration tyre and fuel strategy, where as it focused on being fast last year. Besides the random collisions such as bolting into a corner or running up on you, the A.I. seems to brake early. Like 300 yards early. It seems to be overcompensating for the strategy. Otherwise, the flow seems to be off with your rider versus the A.I. especially when exiting corners. While you’re fighting for traction, stability and speed all while gauging the apex, the A.I. will do it like it’s nothing and sometimes take you out in the process. It’s an improvement but there are still some holes to fill.

Milestone has upped the visuals and for both the PlayStation 4 Pro and Xbox One X as there are some visual options to play with. A performance mode will provide 60 FPS while the image quality will take a hit. If you prefer a quality mode, the experience with the frame rate was just fine on the PS4 Pro. Motion Blur can also be adjusted as I played the title with no motion blur and with the highest quality option and the game ran smooth. The overall look is an improvement from last year as foliage, track and other objects get a bump up in detail. The HDR helps bring the environments to life as the bikes and the player models will stand out. Colors pop from anywhere on the track ranging from the grass to the flags. The game still runs on a dated Unreal engine, but helps to make the most of it. Crash cameras and crash animations are good looking too. Little details such as riders reacting to collisions and even seeing the right hand react when you increase the throttle are nice touches. The sounds of the bikes are a mixed bag. They are loud and each bike sounds different when the MotoGP bikes sounding the best and the historical bikes being right there. The lower tier bikes from MotoGP 2 and MotoGP 3 are not pleasant to listen to. 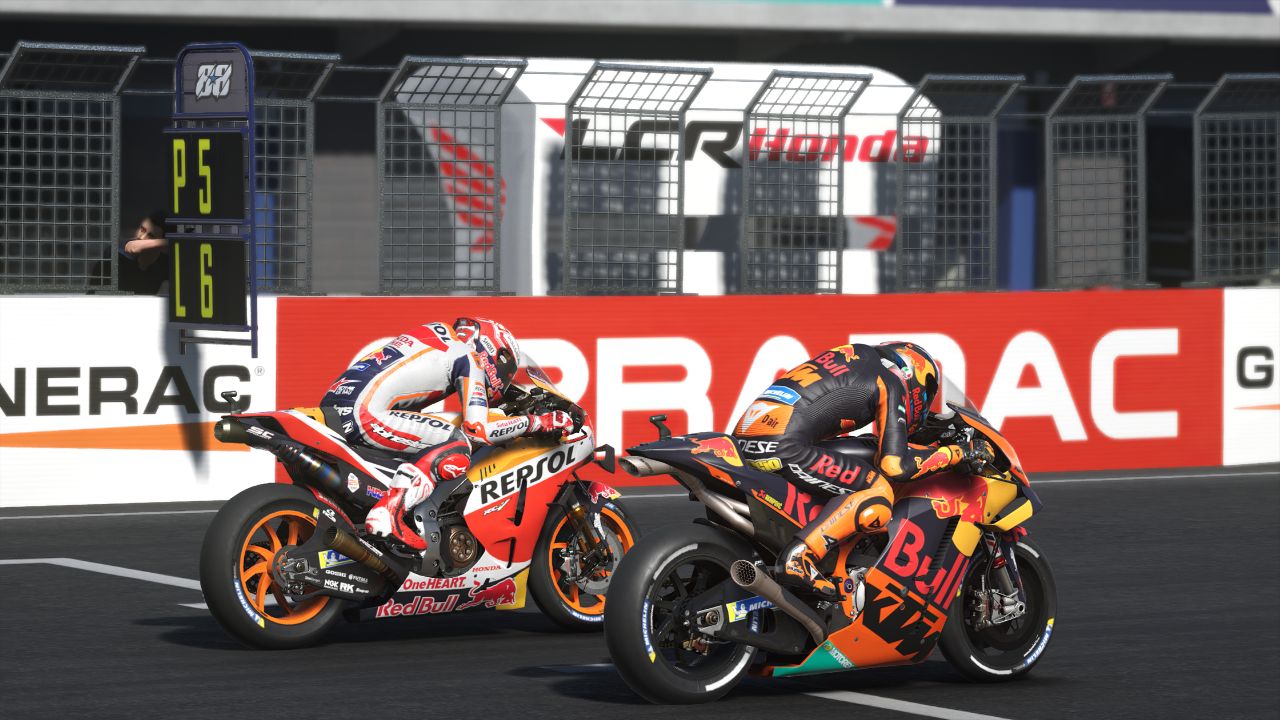 The biggest addition outside of the physics comes with the Managerial Career. Players can now either create or take control of a team in any of the MotoGP leagues. MotoGP 20 returns MotoGP, MotoGP 2 and MotoGP 3 along with all the riders and the teams for the 2020 season. The game even includes face-scanned managers from popular teams. With the Managerial Career, players will first sign a Personal Manager to seek out new contracts and sponsors. Beyond that, a Chief Engineer will be hired along with a Data Analyst. From here, the budget must be managed as the player looks to improve their team. Players will research and develop specific parts of the bike and will allocate engineers to do so. The process is simple and straightforward. The season starts with a couple of weeks before the first race so players can focus on keeping their team ahead of the pack. One issue that bothered me with the mode was allocating engineers. The game does not state if an engineer is already allocated to a project and if selected, it doesn’t provide a warning. The only way around this is getting to know names. Players can also participate in testing sessions to further improve the bikes. Managerial Career is well executed and is another aspect of the MotoGP series I would like to see in other racing titles.

Outside of time trials, an offline championship mode and the ability to customize the bike and rider with a plethora of options, the Historic Challenge returns with riders from mainly the past twenty years. Again, there are a few pre-2000 riders (and a few more as DLC coming) and only two classic tracks. You will need to be good to unlock other riders as you earn gems from placing on the podium. The difficulty level cannot be altered in these events. Online received the same treatment of dedicated servers that Monster Energy Supercross 3 did. There’s a lobby system and the ability to create private and public games along with a race director mode. In the online races I ran, I experienced no issues with connectivity and everything ran smoothly. No opposing riders would lag and overall it was a good experience. Milestone does need to consider expanding options here since its other two games feature an open-world compound. MotoGP 20 also lacks an online championship or season mode, which is disappointing especially since the online server seems to run so well. 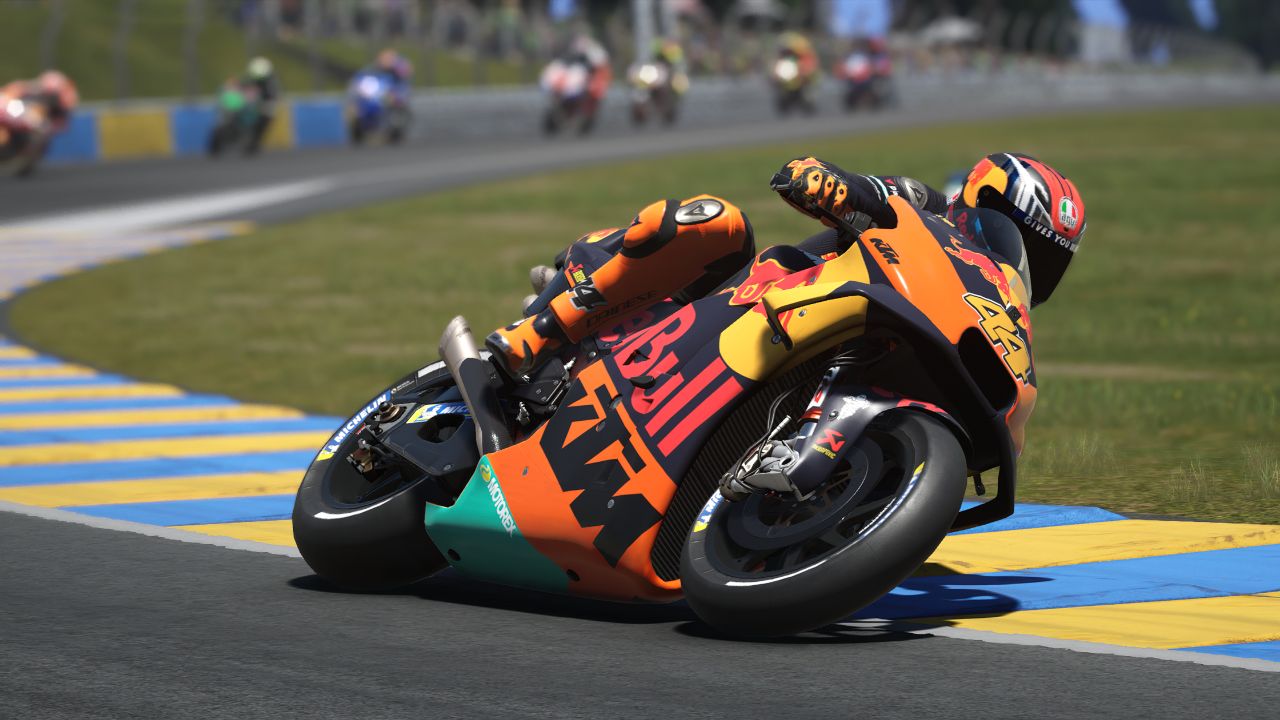 MotoGP 20 adds an underlying layer of improvement to what made last year’s title so impressive. The proper integration of tyre and fuel simulation add a more realistic aspect to the game. The brake improvements are important as well, but strangely omitting brake temperature monitoring is weird given the inclusion of tyre temperatures. The racing feels better and A.N.N.A has improved, but still has a ways to go. Slight visual improvements also bring the game to a closer realistic interpretation of the sport, but those also have a ways to go and that may come with the next generation of consoles. The star is the Managerial Career as this design and implementation could teach some other games a thing or two. The online experience is a bit shallow but runs excellent. With the huge jump of MotoGP 19 from previous titles, it may be hard to fathom forking out another $50 for some improvement, but MotoGP 20 will offer more than enough for fans and newcomers alike to the racing series.