Kevin may look tough, but he’s an honest, sweet half-beastman who cares more deeply for his friends than anyone else. He wears his emotions on his sleeve and wishes to prove he’s the strongest fighter out there. He hopes to live up to expectations and prove that being a beastman isn’t just about cruel brute strength. 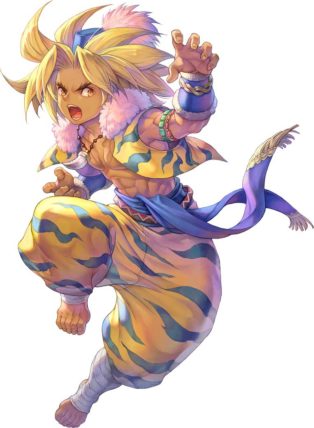 Kevin is easily the most powerful attacker in Trials of Mana. His strength is completely unmatched by any other character and he caters heavily to attacking nonstop with incredibly powerful attacks. During the night, Kevin shape shifts into a beast and deals extra damage no matter which class he chooses. Those looking for a brutal attacker who is fully focused on strength without worrying about magic will likely enjoy wandering down the Dark path most. The Light path offers a near equal level of strength, but gives Kevin more access to magic that allow him to strengthen himself in combat without anyone else’s help. If a party has someone who can buff other characters, Kevin is likely better off going down the Dark path in order to reach his most powerful potential without worrying about MP. If he’s the only one capable of giving out buffs on the team, he should go down the Light path.

As the undisputed strongest, Kevin works well with any other characters.