When it comes to new previews for upcoming games to cover around here, it can get tricky at times when multiple writers end up being infatuated with the same game, especially if there’s no new demo to work with. Case in point, Ghostrunner, the upcoming first-person cyberpunk action game from developers One More Level, 3D Realms, and Slipgate Ironworks. Our own Jason Bohn had basically already whipped up an amazing preview a few months back, highlighting the insane cyber-ninja action, platforming, cool soundtrack, etc. And when I got a chance to check it out a while ago because I was awestruck by it as well, I was given the same demo. So I was hoping for some unique hook to present itself, something different that I could work with. And as the title may suggest, I got my hook…just not in a good way.

See, initially, I was playing the Ghostrunner demo with a keyboard and mouse. And it was working perfectly fine. One command requiring pressing the left Shift key, however, just felt slightly awkward to me. I know, I know, but with a game such as this where you need extremely quick reflexes and timing, I felt like a WASD setup wouldn’t work as well for me (at least not without more time to get used to it). So after playing it for a short while, I decided to try it out with a controller instead. And oh, was that a mistake. 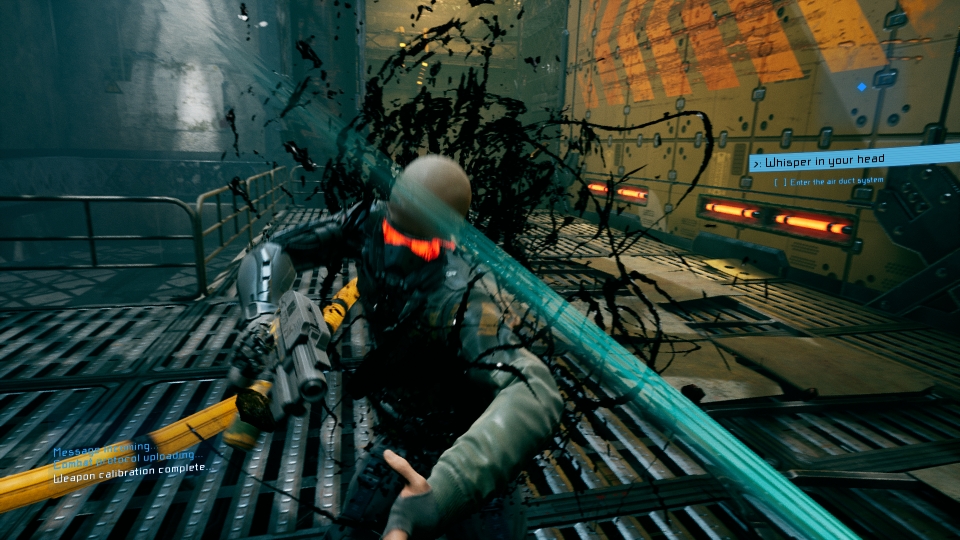 The default controls for the controller were awkwardly set up. How awkward? Well, the button to jump was the RB button. The RB button. Why not the tried and true A button? True, Ghostrunner has you dashing forward and briefly freezing time in the process, grappling via various hooks, running along walls and crouching/sliding, among other things, all requiring a different button or key. But the layout here just didn’t feel natural and has the commands all over the place when it comes to using a controller. I had just gotten so used to playing first-person shooters and action games with certain control setups in mind (with both controllers and keyboards), but here, I felt like I basically had to re-learn everything. And with a main character that dies in only one hit, that made for a particularly hard lesson.

It wasn’t that bad at first, though. The initial segments relying more on jumping, sliding down ramps and wall-running were fine. But once combat started, it felt like a mess. And yes, I know what some of you are thinking: “Well, why don’t you just remap the buttons?” True, that would be the obvious solution, but it just baffled me why even something as simple as the jump button, among the rest, are re-aligned like this as the default controls to begin with. So I asked the developers why the controller setup was like this, and…well, I honestly wasn’t prepared for this answer: it was deliberate.

See, One More Level wanted the player to keep their thumbs on the sticks at all times, according to Game Designer Radosław Ratusznik. In fact, they even cited two other games that did use a similar setup, at least when it came to jumping: the parkour-heavy Mirror’s Edge and Dying Light. And indeed, a quick online search revealed that they used either LB or RB for jumping. And I had actually played both of those games, if only briefly, and I didn’t remember them being awkward at all, at least when it came to using a controller (my enthusiasm with Mirror’s Edge died down once guns appeared, though). So why did this suddenly feel like a problem? 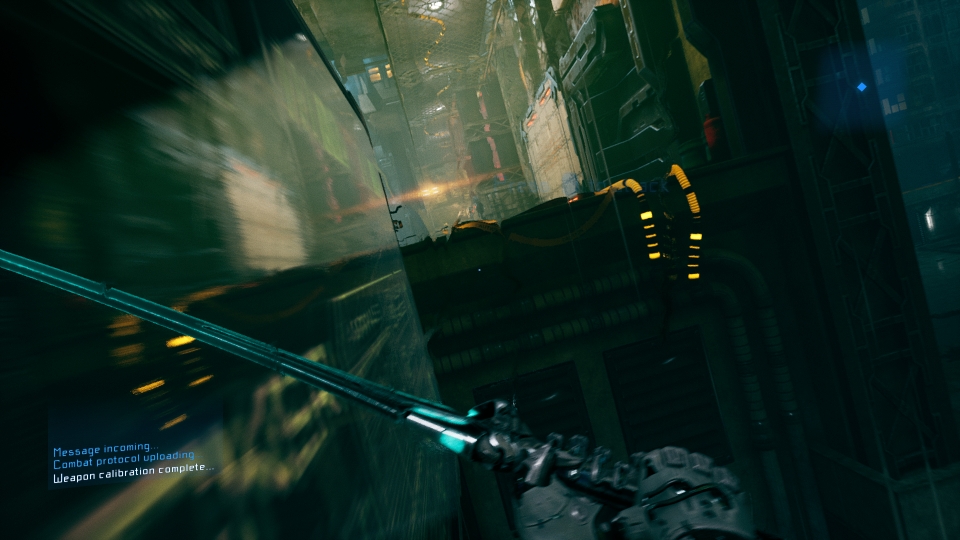 I decided to ask any of my fellow HG staff members if they had any experience playing these games with controllers, and our own Jordan Helm described that he had played Dying Light, and did remap the controls, but when back to the default controls had gotten used to them. He also said, however, “to be honest, if I was ever having to jump or move in general in Dying Light, it was whenever I wasn’t in combat at the time.” And then it hit me as to what the problem was.

See, in Dying Light, parkour is mainly used defensively. It’s used as a means of getting around and avoiding combat, especially during any night missions when having to survive against the more powerful infected and trying to make it back to a safe zone. As Jordan noted, it was mostly separate from combat. Ghostrunner, however, also wants you to use parkour offensively, and now instead of swapping between two different style of gameplay, you have to juggle them.

And as mentioned, jumping across rooftops and climbing around and fast speeds felt okay with the default controller setup, but suddenly when you’re leaping from wall to wall across a bottomless pit while having to dash to avoid laser shots from an enemy, hoping to stick the landing and get to them in time before they fire off another shot at close range that can kill you (again, one-hit death, as opposed to Dying Light), all in the span of seconds, it becomes a bit of a mess as you recall which buttons to push. And this was the first level, mind you. Hopefully the setups in the final game are challenging, but still fair and are set up a little better to ease players in.

So yeah, in hindsight, it’s not the controller layout that’s the issue, but rather the style of gameplay, which is fast and doesn’t give you as much time to get used to a different setup like this. Luckily, the developers are planning to include alternate control setups, including those where A and B are more traditional jump buttons, which may prove to be more useful. Or it could be that more time with the default setup would allow one to understand it better, but it seems like it might get in the way of wanting to see more of the game. The keyboard and mouse is probably the way to go, but let’s hope the console versions turn out okay. 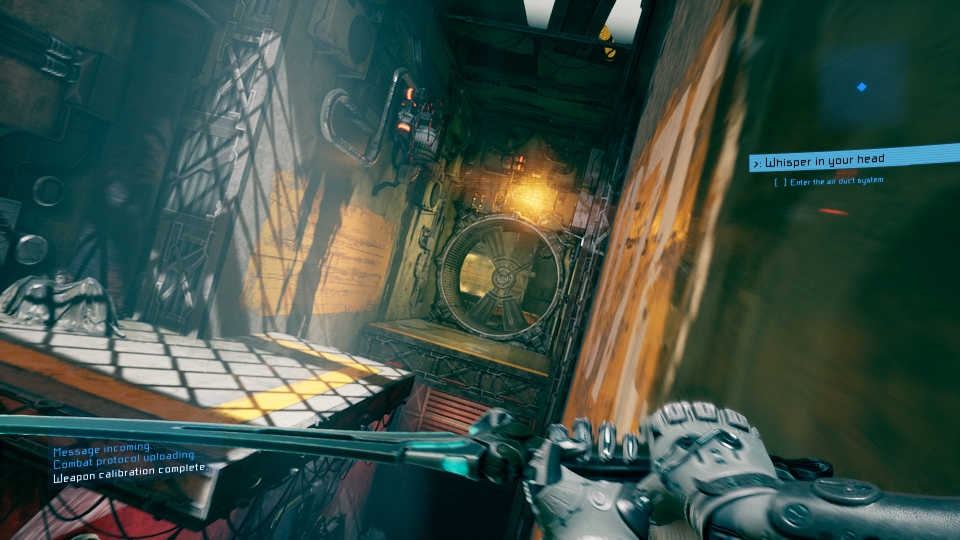 And I do hope all version turn out great, because I should note that Ghostrunner’s most notable flaw could practically be considered its only flaw so far. I may have had to re-learn everything, but again, when things clicked together and I got into the groove, it worked really well. The Katana Zero-esque gameplay translates well into three dimensions with terrific combat, the graphics and cyberpunk style were impressive, the story seemed interesting, and while bit tricky at times, bits like wall-running were fun. And it goes without saying that leaping on an enemy and slicing them in half is true joy. While Ghostrunner still has a few kinks to iron out, it should hopefully be worth diving into when it comes out courtesy of publishers All In! Games later this year.