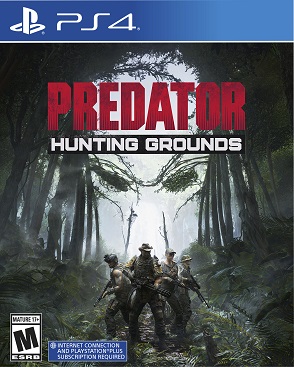 Since its debut over thirty years ago, the Predator franchise has been sparse with its video game adaptations. The first three games directly associated themselves with the original movie and its sequel, while the fourth and latest title, Predator: Concrete Jungle, arrived in 2005. Nearly two full console generations later, the intergalactic hunter has returned to the interactive medium, as Friday the 13th developer Illfonic has taken their second shot at crafting an asymmetrical multiplayer experience based on a beloved ’80s movie icon. Much like their previous adaptation saw seven camp counselors attempt to escape from a focused Jason Voorhees, Predator: Hunting Grounds sends up to four soldiers into a mysterious jungle to complete objectives and take on guerilla fighters until the titular player-controlled alien makes their presence known and tries to eliminate those who entered their territory. While the core premise and dedication to the license remains faithful to the original movie, the repetitive Fireteam objectives, clunky Predator controls and overall lack of polish holds Predator: Hunting Grounds back from offering a consistently fun multiplayer experience.

At the time of its launch, Predator: Hunting Grounds is an exclusively online multiplayer game with quick and private matches available for its singular mode, Hunt. After a brief introductory cutscene, the Fireteam is tasked with a series of objectives across the map which range from killing NPC enemies to defending key points at various campsites, among other tasks, within a fifteen minute time limit. Meanwhile, the Predator, with only one deadly goal in mind, must use their enhanced sight and audio abilities to track down the players, relying upon traversal across the trees (also known as Predkour) and cloaking to stay out of sight until the perfect opportunity. Soldiers can cover themselves in mud and disable alarms to avoid creating any unwanted attention, but eventually the Predator will find their prey and do their best to separate the squadmates from one another, as multiple soldiers can typically fend off a charging Predator, leading to tactical retreats or an untimely demise. Reinforcements can be called in to replace any killed soldiers, but these missions often require abandoning the objective during the late stages of a given match, leading to some tough choices.

While certain end cutscenes are much more frequent than others, Predator: Hunting Grounds does offer a nice amount of variety in its match-ending scenarios. Successful Predators can revel in the moment with long claims that feature some truly gruesome deaths, but even defeated Predators have a small window to activate a self-destruct sequence, forcing soldiers to either try to defuse or run for their lives. Players who manage to fully take down the trophy hunter must now attempt to protect a prize of their own, as mercenaries come flooding in to try to destroy the alien body as a last-ditch effort. Finally, skilled soldiers who survive long enough to complete all the objectives can call in an exfil helicopter and hold off one last round of enemies along with a Predator desperate to take advantage of their final shot at victory. These latter situations represent some of the more challenging gameplay sequences, but successful players will be rewarded with unique cutscenes and additional XP. 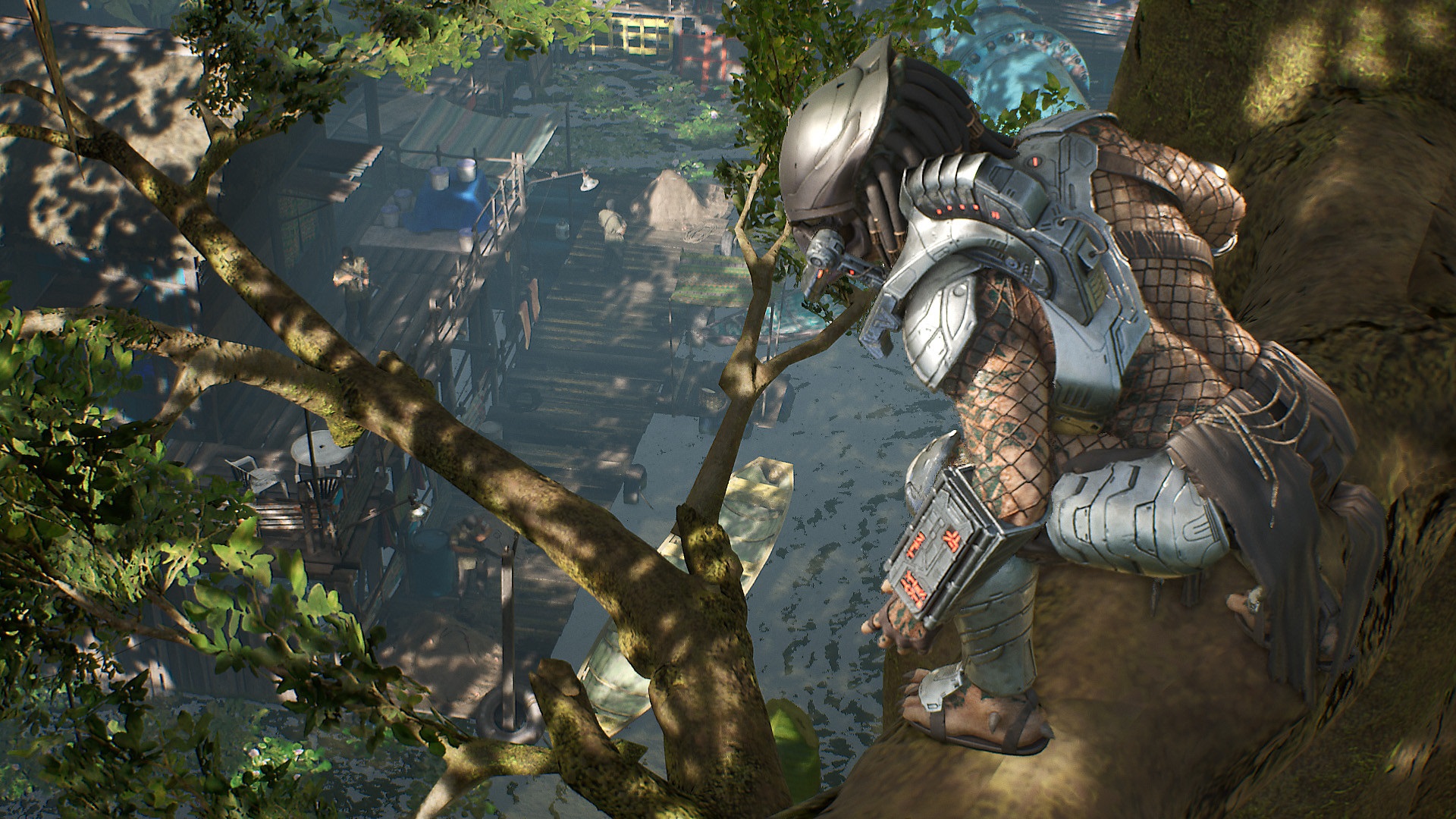 Illfonic has expanded on the depth of gameplay for the non-monster players, as the Fireteam experience is reflective of a traditional FPS experience. The pre-match lobby dives into the specifics of the mission at hand and offers different drop-in spots to add a little more replayability to each set of objectives. Unfortunately, without the knowledge of where your randomized waypoints will be, these choices feel pointless as they rarely impact how efficiently a squad can complete the mission. Plus, although the objectives seem varied and do a suitable job of encouraging teamwork, they all ultimately boil down to holding the interact button next to an object, leading to no distinct difference between hacking into safes and servers or inspecting dead pigs. While there isn’t a huge number of weapons at your disposal, the mechanics for shooting feel reliable enough to know when you’re landing shots, but lack any realistic impact to make the combat feel anything beyond satisfactory. Although stealth is encouraged through pings and crouched movement, the generally unaware AI makes walking in the front door and shooting everyone in sight an equally effective option, since the mercenaries often serve as more of a distraction than a legitimate threat. Outside of the showdowns with the Predator, much of the Fireteam gameplay feels like ways to kill time as opposed to an engaging experience, as numerous matches can go by without resorting to any of your extra gear including ammo or health drops.

During our time with the game, the wait time for playing matches as the Fireteam or with no preference were minimal, but selecting the Predator understandably took a little longer to find new matches. Unfortunately, without extreme caution, playing as the agile alien can often feel not worth the wait. A few of the abilities, including thermal and cloaking, are easy to access with simple prompts, but far too many of the weapons and tools are locked in a weapon wheel, which often proves tough to access in the heat of the moment and restricts the player to whatever they already have out. Playing as the Predator also features a surprising amount of inactivity, as the player waits for target isolation scans to point them in the correct direction, and lengthy energy and health regeneration sequences after tough battles. As a result, the supposedly powerful hunter often comes across as weaker than necessary, outside of one-on-one duels with soldiers that willingly separate themselves from the group. Those moments where it does work in your favor, as you seamlessly leap from one tree branch to another while stalking your prey and manage to catch a Fireteam off-guard, can be exhilarating, but these opportunities are too few and far between for the iconic beast, instead encouraging frequent retreats and long periods of downtime. 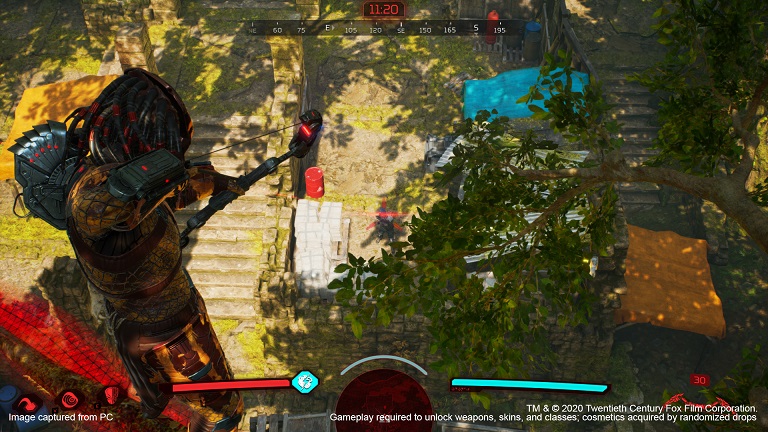 As a result of these individual issues, many matches will often feel unbalanced, with a grouped Fireteam often downing the Predator in their first or second encounter, while separated Fireteams may fumble around a bit longer before the Predator eventually picks each of them off. These common outcomes can often lead matches to feeling repetitive after longer stretches of play, as players quickly bounce from one blowout to the next with a properly enjoyable match featuring multiple Predator encounters and individual soldier eliminations appearing as a rare treat. Most frustrating of all is the lack of a proper tutorial for the Fireteam, which initially seems like any other first-person shooter, but contains additional mechanics like covering yourself in mud, disabling alarms and defusing a self-destructing Predator, all of which would serve as welcome tips for struggling beginners despite never being explained in-game.

Both Predators and Fireteam members come equipped with their own loadouts, where they can select from one of four unlockable classes, plus primary and secondary weapons, alongside additional gear and perks. Each Fireteam weapon has its own level system for adding attachments, while new classes, weapons, gear and perks are each locked behind an overall level that caps out at 100. While most of the unlockables feel properly earned based on playtime, giving the Predator access to better weapons or classes early on would go a long way toward giving rookie players a better chance at getting kills. Plus, the chaingun, an expectedly effective secondary that can deal major damage to Predators and typically unlocks at level 68, has been given away as a pre-order bonus, providing a significant advantage to diehard fans that leave more casual players left behind. Predator: Hunting Grounds also includes a loot box style system known as Field Lockers, which at the time of launch, can only be purchased with in-game currency and exclusively rewards players with customization items.

Much like with their Friday the 13th adaptation, Illfonic has once again proven their fondness for classic ’80s franchises as Predator: Hunting Grounds is filled to the brim with clever nods and deeper lore via collectible OWLF recordings. The sound design in particular draws heavily from the movies, including the iconic warblings and howls of the Yautja and several pieces from the original soundtrack used as background music, even if the voice acting often falls flat. The graphical presentation is perfectly adequate as long as you don’t look too closely, and while there were no instances of lag during our time with the game, most matches were plagued with inconsistent frame rates and occasional audio drops, even if neither of these were ever severe enough to regularly impact gameplay. The only substantial glitch arose in one match when playing as the Fireteam, when our next assigned target never properly spawned in, forcing the squad to wait around until the Predator chose to show up as there was no available way for us to progress without them. The UI, while a little cluttered, does an efficient job of displaying many of the available tools and abilities for soldiers and Predators, which comes in handy for new or variety-seeking players. With one patch already implemented days after launch and another in the works, Illfonic seems initially dedicated to helping Predator: Hunting Grounds evolve into a more stable and balanced experience. 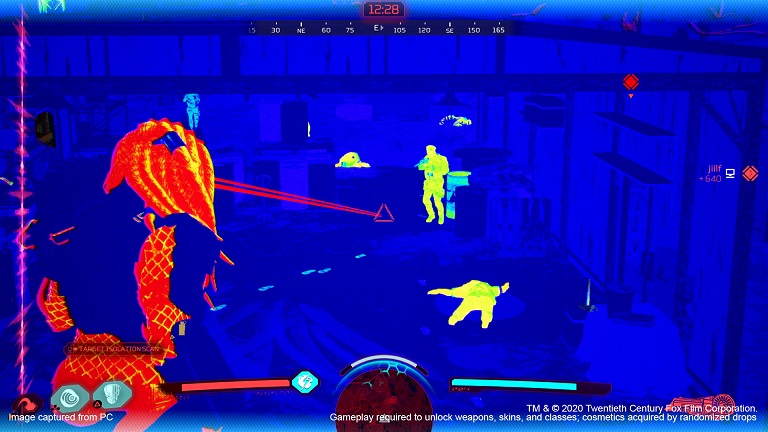 Predator: Hunting Grounds is bolstered by its unique gameplay dynamics and beloved license, but falls flat thanks to unbalanced and repetitive matches as well as a general lack of polish. Some matches manage to capitalize on the thrill of hunting prey and surviving alien encounters, but the overly-simplistic Fireteam gameplay and the unnecessarily complicated Predator mechanics lead to matches that end far too quickly to feel satisfying for either side. With some post-launch balance refinements, additional polish and a proper Fireteam tutorial, the title could re-emerge as an imperfect but more frequently enjoyable experience thanks to its strong fundamentals. But as it stands, Predator: Hunting Grounds is tough to recommend at launch to those who don’t consider themselves diehard Predator or asymmetrical multiplayer fans.