The early ’90s were a great time for Capcom, with games like Street Fighter II showcasing their talents on a grander stage than ever before. Their arcade games were industry-leading and their console work was not only some of their best at the time, but has remained a standard bearer 25 years later. Games like Final Fight and Street Fighter II showcased pro wrestlers and it made sense to marry the technology they developed with the CPS2 arcade board with pro wrestling — which may not have been at a high point in North America, but was riding a wave of success in Japan and Mexico when Saturday Night Slam Masters came to be.

The core game can best be described as a pro wrestling game with Street Fighter-style action. You have a jump button, attack and a pin button alongside a slew of joystick commands to deal out damage. Unlike many console wrestling games released in North America, each character had a distinct moveset and unlike even today’s games, every move had a slightly different animation even if it was shared between different characters. Biff and Gunloc would be the Ryu and Ken of this game and they each did things like dropkicks and crossbody blocks differently. Unlike a lot of wrestling games of that era, you also have characters that look and move totally differently. 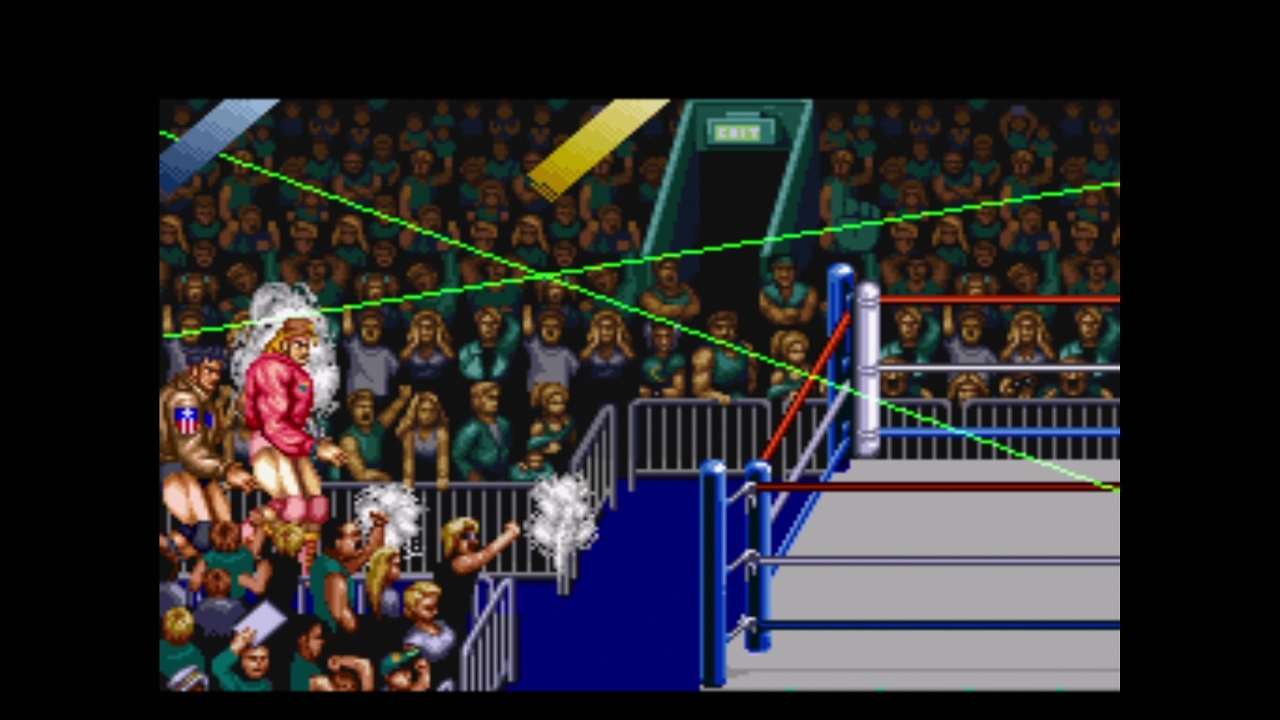 At that time, especially on the SNES, you just had cut and paste wrestlers with different models but the same movesets — so every match felt the same. With Slam Masters, you have high flyers like Oni and Stingray with the former being a mix of a kabuki facemask a la Akira Hokuto and the latter being a high-flying small luchador very much like Rey Mysterio Jr., who even in the early ’90s was making waves with his work in Mexico. Character size was different as well — so having him battle Titanic Tim felt like a David vs. Goliath battle because it was. Much like a brawler, the tiny character can hit and move, but the larger character deals out more damage per shot.

The feel of Saturday Night Slam Masters was the most refined of any arcade wrestling game — including Wrestlefest. While that was about as perfect a WWF game as existed at the time, this game set out to replicate a wide array of wrestling styles within an arcade game’s framework. That meant having to create something where you could have satisfying high-flying matches alongside back and forth battles with all-around wrestlers, or big guys just beating the tar out of each other like Stan Hansen and Vader did in New Japan. For the most part, the game succeeded in doing that, and benefited from a variety of wrestlers and game modes. 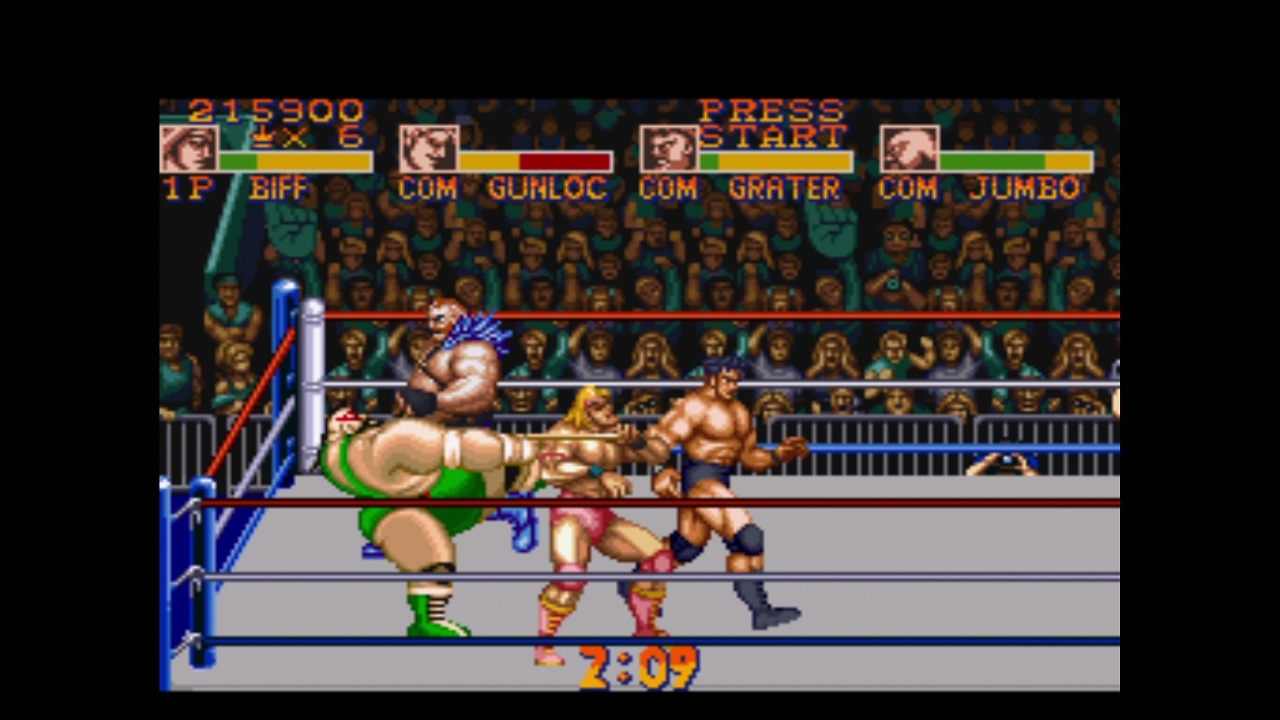 You have single and tag matches to enjoy, with the latter being tornado matches with elimination rules — which can itself be thrilling. Singles matches allow the core gameplay to shine and enable you to have more arena-based brawling, while team-based affairs are more thrilling. I love having singles matches where in one match, you can have Biff battle Tim and dive on the floor with a suicide dive on one side, send him down to the foreground for a plancha, and then hit him with a chair, buckle or table to deal out extra damage. You can either take him down for a while and stun him or maybe even win by countout by taking him down at the right time. There’s a lot of diversity in weapon usage and unlike any game since you can even jump up and throw weapons at enemies to take them out from afar — adding a makeshift projectile element to something that otherwise works as a slightly outworldly pro wrestling game.

Outside of the supernatural Scorpion character with lightning covering his body for things like a Tiger driver, every character and move in the game could to some degree happen in a real pro wrestling match. In seeing some of the flying attacks featured with modern eyes, some of the stuff Stingray does wouldn’t be all that out of place in a Rey Fenix match now. While Alexander the Grater wears his Vader influences on his sleeve, it’s fun to play matches with him as a Vader surrogate and using Gunlock as a Sting stand-in to replicate the feel of their WCW battles from the early ’90s where you’ve got this great all-around athlete around this ass-kicking beast of a man and you have to use intelligence to fight from underneath to win as Gunloc or fall to Grater’s long-range hard-hitting punches and violent powerbombs and backbreakers. 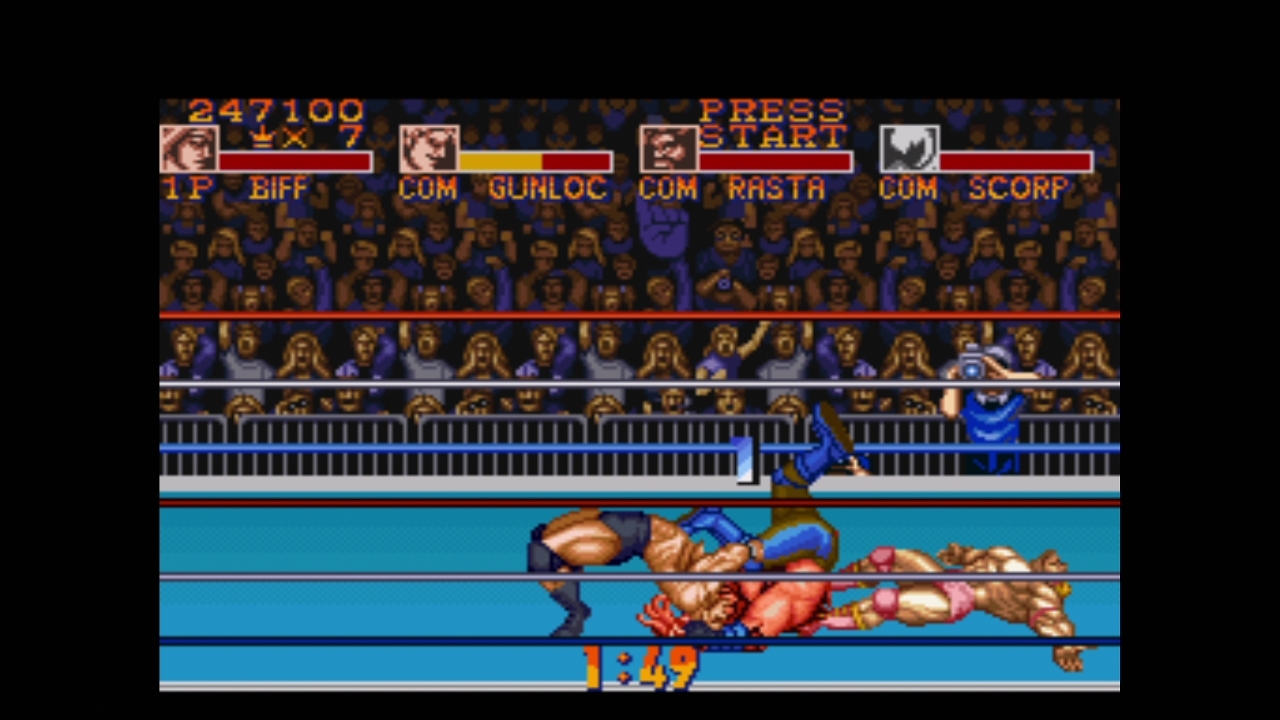 The arcade and SNES versions feature those modes, while the Genesis version has something that wasn’t seen ever at the time in North America and isn’t seen much now beyond Fire Pro Wrestling — a death match mode. Here, you could throw people into exploding barb wire on the ropes. It allowed you to use weapons in the match itself and kept things to one on one matches. You’re able to go to the floor on the foreground and throw people into exploding boards on the left and right-hand sides of the ringside area. It’s a nice side mode and something that was able to be put into the Genesis version because that came out about a year later than the SNES version and the arcade sequel had been released with that style of ring already in it.

Tetsuo Hara designed the characters for the game — including a revamped spin on Mike Haggar bringing his old dark green slacks into a more wrestling-centric look with long tights. The sprite art is around the level of Super Street Fighter II with a lot of detail — making things like Scorpion’s mesh face mask easy to spot. Animations are fluid and you can easily go from a top rope dive to a big suplex or tombstone piledriver with ease seamlessly. There are even different moves based on nitting a direction and not — enabling a lot of last-second attacks that can take a foe down and allow a pinfall in a tag match. It’s a good-looking and wonderfully-playing game that has held up nicely. 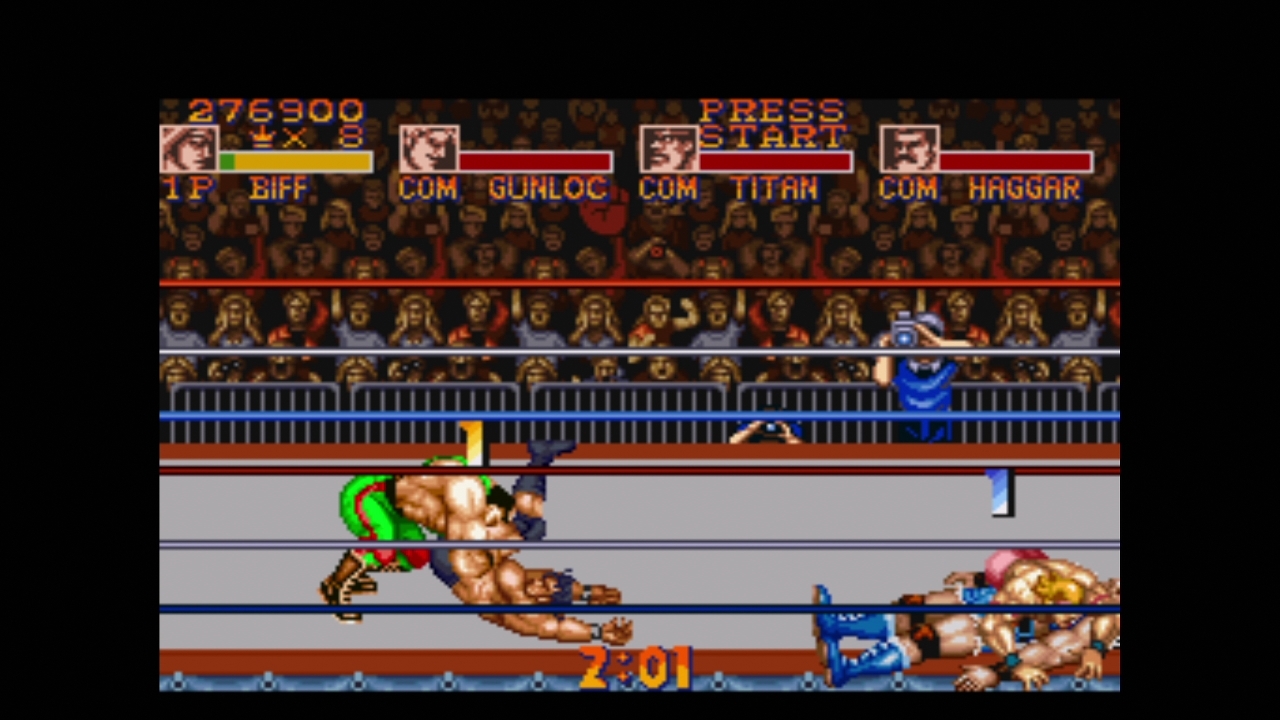 The sound design in Slam Masters is underrated, but features ring announcements for the venue itself and theme music for the roster. Entrances are short and sweet, but memorable with guys like Rasta having a monkey, or Haggar getting Jessica on his shoulder a la Randy Savage and Elizabeth in his post-match pose. Attacks have a satisfying oomph to them, with rapid-fire shots being kind of tinny and larger brutish attacks offering up a loud smack against the body. The soundtrack itself fits the fast action of the game, but isn’t as memorable as the SF II OST. Still, it’s fun to hear during the game and that’s not too bad.

Saturday Night Slam Masters is one of Capcom’s best early ’90s games period — and yet it really hasn’t been re-released. Outside of the Genesis port, it hasn’t been on any of the company’s many retro collections. With Capcom releasing even more older arcade games not only via collections on PC and console, but with retro mini arcade cabinets, hopefully Slam Masters gets its due one day. It would be a seamless offering either way as there’s no licensing to worry about. With the Switch Online featuring SNES games, maybe one day we’ll at least get it featured there — it would be great to have this arcade classic on the go.