In a time where action RPGs are taking players to task should they refuse to learn from their mistakes, it’s a refreshing sight to find a game that aims to deviate from that successful formula, no matter how minor that change may be. Particularly when the first sight players are sure to spot is the premise of punishing boss battles, a desolate world to explore and for this particular corner of the industry, charming pixel art thrown on top. The very thought of having the word “Souls” form a game’s title is itself a bold move. While it’s tiring to associate anything remotely challenging with a particular, note-worthy trilogy of games — one that so-conveniently rhymes with Lark Foals — on proposition alone, there’ll always be that opportunity to expand upon the formula. That hope is why for people like myself, the sub-genre will remain a curious sight if not a guarantee of overwhelming success.

Playing through the brief Alpha demo for developer Fallen Flag Studio’s Eldest Souls, I’m immediately, wonderfully, reminded of Bleak Sword. For anyone who read up on my thoughts of that game last year (one I’m still hoping PC and console players get to experience in the near future, by the way), you may have an idea on where I’m going with this. But for those who haven’t — or simply haven’t looked into Apple Arcade, though I wouldn’t blame you — the reason Eldest Souls already sticks out, even after such a brief, two-boss demo, is in its alteration with how combat both plays and feels to simply work out. Don’t get me wrong: memorizing patterns, timing one’s dodges and plentiful curse words at falling to such a simple-to-avoid threat are still the order of play. Anyone who’s played a recent action RPG or boss-rush entrant will feel right at home with this formula.

The difference here, however, is how Eldest Souls puts a greater emphasis on managing one’s abilities — integrating more of a strategic, longer-term approach to evading attacks and making the most of one’s opportunities to strike. Naturally, most people will find the limitation of evasion to three bars and the seemingly-sluggish feel of striking with one’s sword to be off-putting. But to come into Eldest Souls with the mindset one can simply spam the dodge move is itself an early indication of refusing to learn from one’s mistakes. The idea here, much like Bleak Sword, is treating the game less like a real-time encounter and more like some turn-based battle. Again, to be clear, Eldest Souls is not turn-based by any stretch, but the methodology in how you assemble together a string of tactics — the flow of combat — is where the game really asks of its players to truly think.

Especially since the idea of attacking in Eldest Souls is a case of lining up charged-up strikes with the right analog stick. You can similarly spam the attack button if you want — get a few swipes in before dodging out, or even through, the incoming danger — but given how little damage this inflicts on enemies, it becomes apparent that one has to be willing to put themselves, to an extent, in harm’s way for the greater benefits to come to the forefront. Namely the only way one can regain health is by attacking foes with charged strikes. Not unlike the health-regain mechanic in Bloodborne, only you needn’t be damaged first to start clawing back precious segments of that depleted health. Combat overall, as a result, is a constant encouraging its players to not only refrain from overwhelming defensiveness, but to be willing to put one’s self in among the fray of enemy strikes and area-of-effect attacks. 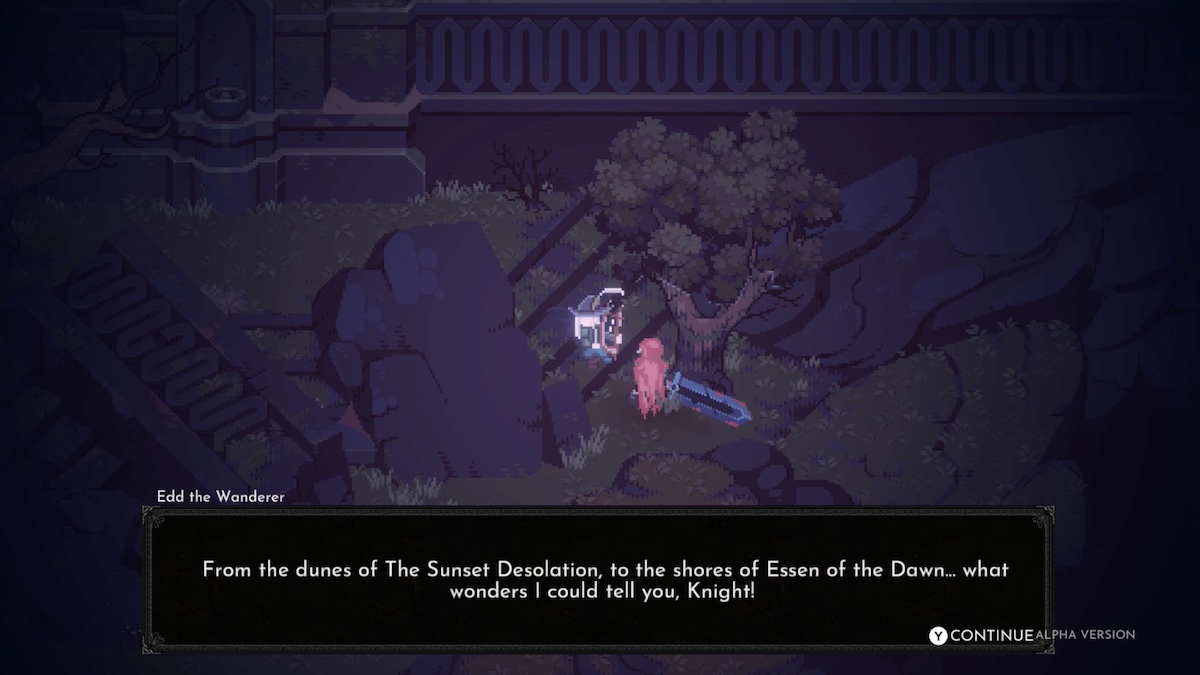 That’s not to say there aren’t occasions where landing a well-timed charge attack is down to simply knowing when a boss is likely to stop its own strikes and be open to a counter. But even then it’s so easy to forget about one’s restrictions. And not just with one’s health but as noted, the ability to evade. You may well be able to land a charged hit — maybe decide to initiate what the game calls a Blood-Burst attack, available only when your attack meter is full, for extra damage — but even then, if you haven’t made good use of your limited evades, who’s to say you’ll still be standing when a boss dishes out a chain of deadly strikes? This is precisely where thinking several moves ahead comes into play, why it’s so important to the overall flow of combat and why, most importantly, Eldest Souls underscores the joy of learning in amongst the pain of repeated deaths.

That allure of a stand-off between you and the boss — to see who blinks first — is what aids these fights greatly. Even from as brief a snapshot as this demo offers with its two encounters, the second boss one faces is a good example of playing the long game. On not getting too frustrated at the lack of openings. To not get so easily dragged into desperation — or simply find one’s self cocky or self-assured of the outcome — because damage here is costly, very costly. It isn’t long then before your health bar is but a slither of red and you’re having to once more put yourself in even riskier territory just to regain that lost health you should’ve done better at maintaining. While that self-berating feedback loop is nothing new for these kinds of games, the way Eldest Souls manifests this is partly the reason why the game’s more-restrictive use of abilities and means to attack make sense. 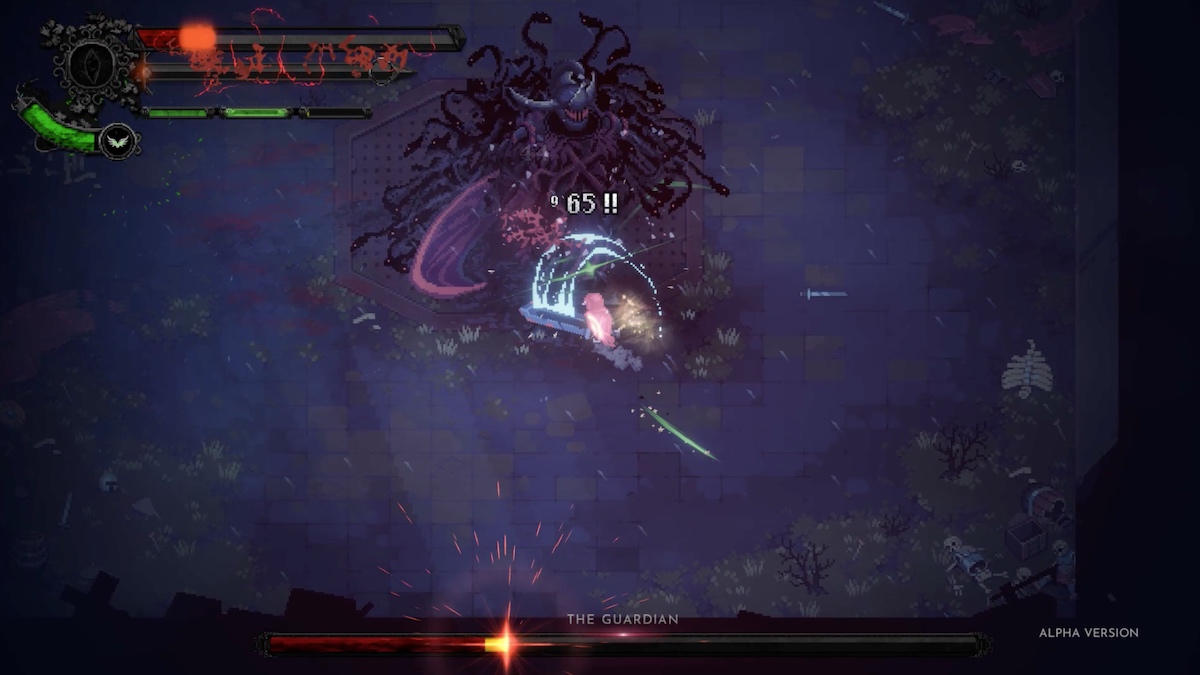 The current build does of course leave plenty of room for questions on improvements. Hence, one could note the less-detailed pixel graphics or the odd way one’s sword is animated whilst moving. Even the fact abilities one unlocks already show a less-than-gracious lack of balancing — why bother with anything other than “Windflow,” given it serves as a projectile-like assistance in damage output — this is still an early demonstration of the kind of RPG system the game is looking to build off of. Certainly there are some areas Fallen Flag will hopefully look at and tweak. The fact the camera zooms in should you activate the counter ability to the “Guard” unlock, regardless of whether or not you pull it off, is a strange design choice.

But to state I played through this, then proceeded to experience it all over again twice more immediately thereafter, should give you an idea on how well this early draft looks to be playing out. Proof that action RPGs can, on occasion, find nuance and variation on what is a successfully-marketable formula of victory-through-failure combat. Finding new and interesting ways for players to relish in the relief and elation of finally getting one over a boss, and of the consequence of not making sound use of such a restricted, but cleverly-so, move-set. If you can get over the immediate hump of the controls. On recalibrating your tactics to think long-term and treating battles almost like a case of chicken, Eldest Souls’ potential lends itself to more than just the variety of its grim, apocalyptic visuals and boss design. The accompanying demo reel at the start menu does indeed hint at what’s to come, but at least here, the intrigue isn’t entirely a cosmetic affair. It’s mostly mechanical and Fallen Flag’s fresh approach to combat could be what sells it. Eldest Souls is one game we’ll be keeping a closer eye on now.