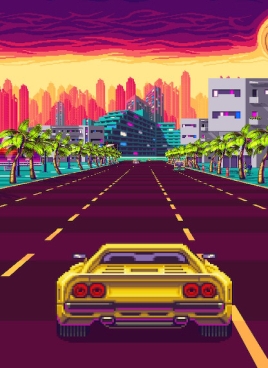 ’80s Overdrive first hit the 3DS is late 2017 and while it got high marks at the time, it was released at the worst possible time for any kind of commercial success. The Switch had been released months earlier and was the clear future for Nintendo’s portable and home-based games, leaving latter-day 3DS releases in a tough spot. The 3DS still had a massive install base and with few new releases, a company’s game would stand out and get some sales just off of curiosity and wanting something new to enjoy. As time went on, ’80s Overdrive got more word of mouth praise and now finally, the game has been re-released on the Nintendo Switch, ensuring it will have a popular outlet to be enjoyed for years to come.

’80s Overdrive finds itself in an interesting position on the Switch as there are many arcade-influenced racers on the platform. The original Outrun still casting a large shadow alongside modern-day games that have a more modern look even if it’s still rooted in the past like Horizon Chase Turbo. ’80s Overdrive goes for a more neon-soaked version of a game released in the ’80s and has a look that is somewhere beyond 16-bit but not quite to the point of “this is what you remember it looking like, but it didn’t look like that” with super-detailed pixel art in 198X.

The game’s usage of color is unmatched to anything on the market today, with bright colors bathing cars, roads and all aspects of the environment. The sky in particular looks incredible, with a lot of cityscape detail and a super scaler-esque approach to depth that fits right in with Sega’s classic ’80s series. The feel of races is more intense though because while Outrun had other cars on the road and later games even had rivals, this pits you against a sea of racers to get the top spot — adding a layer of traditional racing game formatting that always felt lacking. 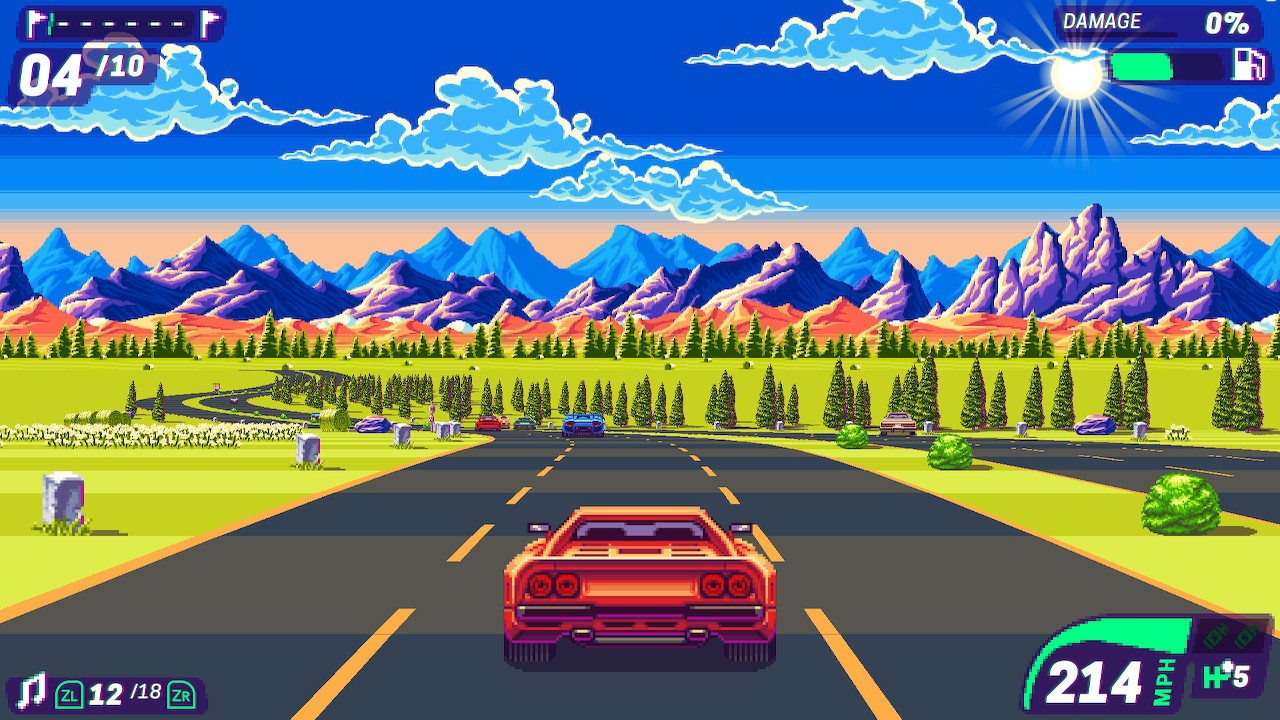 The cool thing is that if you want the Outrun-style where you have branching paths and are only battling the clock to keep moving on, you can. The time attack mode lets you do just that and adds more challenge to the mix by not making is super-clear where you’re going in either direction — which is a bit of a misfire. In theory, you do have signs to read for each path, but in execution, they’re moving by so fast that they can’t be read and you can’t pause the game and get a clean pause screen to see them that way and then chart out a path for the forks in the road that way.

The career mode is the core component and that’s where the core racing action shines. It allows you to rise through the rankings and upgrade your car along the way. Preforming well makes that easier to do, but you also have to make sure to minimize damage and refuel every so often so you don’t die out mid-race. There’s an entry fee for every race and blowing your cash on upgrade means that you’ll be stuck cleaning cars — but even that’s fun to do with a touchscreen mechanic for portable play and stick-based setup on TV.

The format encourages racing well and that extends to little bonus challenges like collecting packages on the road. That aspect is very much like the collect-a-thon aspects of Horizon Chase Turbo, but toned down since you don’t have to worry about getting dozens of things and aren’t punished for not getting things beyond just not nabbing the bounty money. There’s a risk/reward to swapping out cars too as you may wind up not liking the new car, so you have to weigh the pros of maybe getting a new top-shelf car or just upgrading your basic starter car until it’s necessary to switch out. 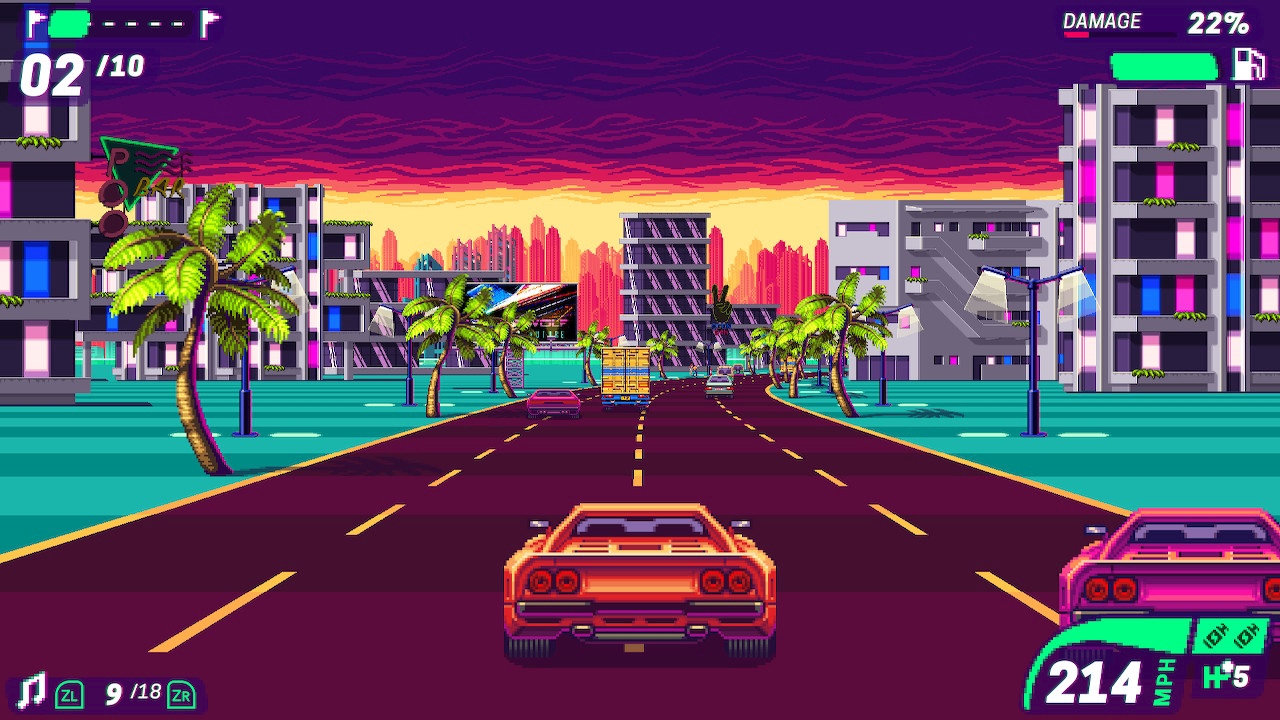 There’s a track creation tool, but it’s bare-boned in terms of customization. It allows you to pick track length, traffic depth, the amount of hills and such, but doesn’t let you go piece-by-piece and truly craft a track from start to finish. It’s more an approximation of a track layout based on the parameters you give it — including setting which will also have the time of day locked into it as well. It’s nice to have just as a way to mix things up, but doesn’t go as far as it could and feels somewhat half-baked as a result.

One thing that being on the Switch does for the game that the 3DS really didn’t offer was ways to control it. While there are a lot of control schemes, none of them felt natural on the original 3DS — although the XL models made L/R controls easier on the hands. While you can’t adjust button mapping, you can control the game with more kinds of controllers — with mixed results. The base Joy-Cons on the system perform well — although like with the OG 3DS, it gets cramped if you don’t have a console grip on. 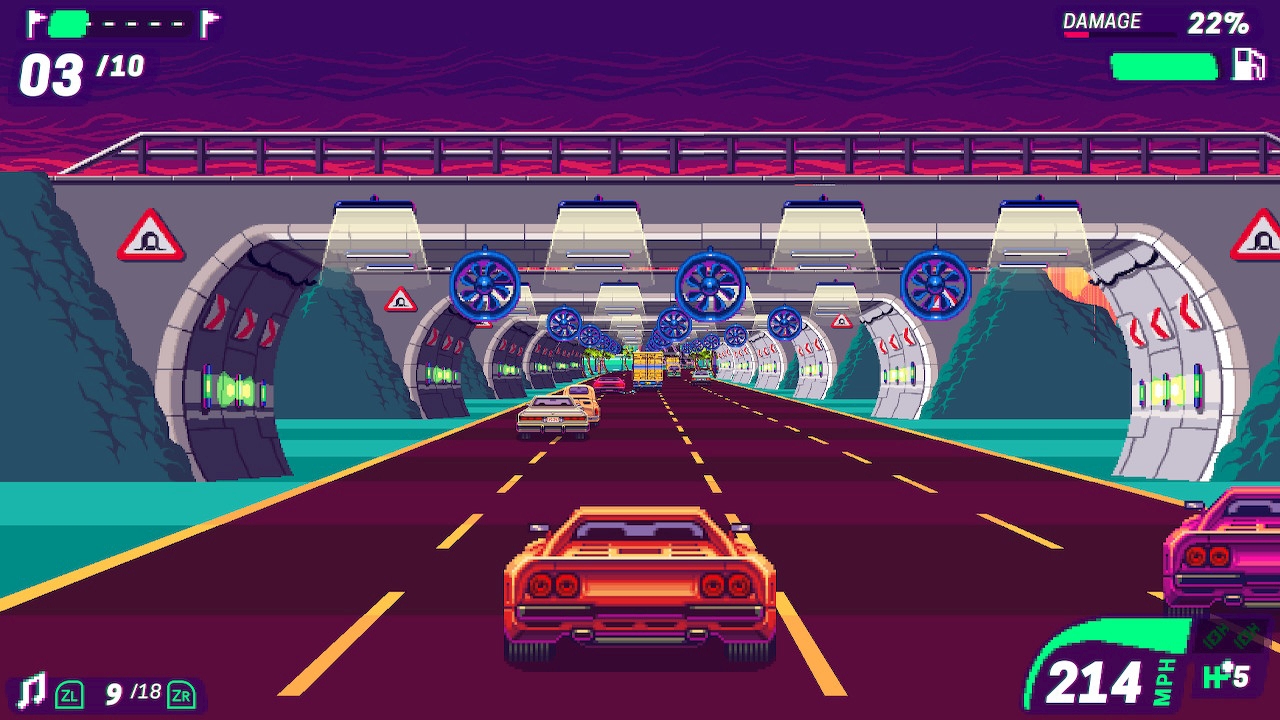 Using an SN30+ Pro works nicely, but there seems to be a bit of input lag with the d-pad and that’s a killer in this kind of game. The official Pro controller works like a dream and the hand grips make it a joy, while the Pokken Tournament controller surprisingly comes out on top. This d-pad-centric pad features giant hand grips, a large d-pad that works perfectly and the biggest face buttons ever on a Nintendo controller — making it easy to go from accelerating to braking and boosting. The only caveat to using this controller is that you don’t have home or screenshot buttons, but for just playing the game, it works better than anything else.

The soundtrack is one of the best retro-influenced ones out there because it uses a lot of neo-synthwave that evokes ’80s music, but with more modern tech behind it. The licensed songlist enables for eighteen songs from Tracks from AceMan, Vectorwolf, Angst78, Wolf and Raven, Karolis, and Vocoderion. Everything fits the ’80s vibe wonderfully, with some standout tracks including “Final Drive,” “Good Night,” “Galaxy Joyride,” “Rad Ride,” and “The Heist.” The sound design is strong as a whole thanks to things like violent collision sound effects for high-impact collisions, while smaller ones still give you a bit of a jolt. 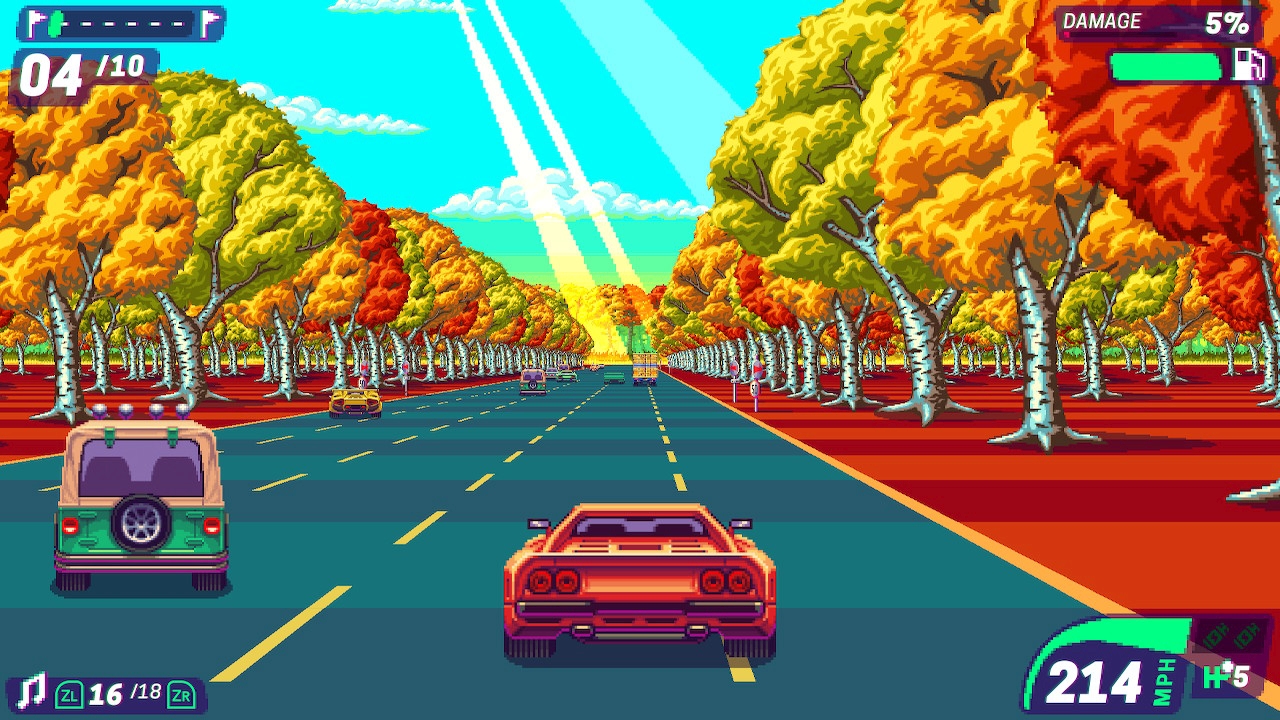 ’80s Overdrive comes to the Switch in top form and stands even taller on the hybrid console than it did on the 3DS three years ago. With games like the original arcade great Outrun and other modern games like Horizon Chase Turbo that it inspired, it would be easy to get lost in the shuffle, but it doesn’t. It stands out thanks to a bright visual style and a memorable soundtrack that makes use of some of the best ’80s-infused music you could ask for. It controls like a dream and even the original version’s touchscreen support is retained for menus to make things easier to navigate. It does fall a bit short with track creation, but is a must-buy overall. ’80s Overdrive is one of the best racing experiences on the Switch, period.