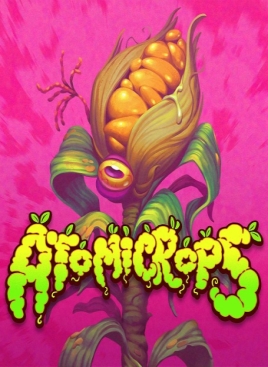 Just earlier today, I saw a tweet concerning ’90s game journalism and how it wasn’t as great as some of us seem to regard it compared to current times. I agree that things weren’t perfect back then (especially as someone who enjoys classic gaming magazines as a hobby), but I do recall one thing that was better. Namely, the fact that critics could say that a game was too difficult and have it be considered a legitimate complaint. Maybe that’s my own nostalgia glasses coming into play, but it seems better than what we have now, where a review that dares to suggest that the difficulty of the game in question can be a hindrance to it results in several negative comments mocking the critic’s skill, and likely results in several thinkpieces and videos that follow, depending on the game’s prominence.

And in case you couldn’t tell by now, Atomicrops, the new blend of roguelikes, twin-stick shooters and farm life sims seen here from Raw Fury and developers Bird Bath Games is the game that caused me to recall all of this. I won’t lie, the game was merciless in shredding me to ribbons and several times I worried whether it was unfair, if it was just bad luck or if there was something I was just missing. But really, there’s only one thing that matters in the end: is the game fun? Well, let’s find out.

Atomicrops begins with your character being taught how to properly grow vegetables on the chipper new farm that they’ve just inherited. Well, chipper until the nuclear fallout occurs anyway. After emerging, though, you still have to use your farm to grow produce and sell it to the local town over the course of a year. The only difference now is that you’re selling veggies to mutants. Oh, and battling them. Each day sees you heading out into one of four biomes (two of which have to be unlocked) in order to gather seeds and equipment needed in order to prepare a bountiful harvest. You only have two minutes to grab what you can while defending yourself with any guns you have or purchase before night begins, though. At which point you have to defend your farm from three waves of attacking gun-toting rabbits and other creatures that threaten to wreck you and your farm. And during all of this, you still have to pick vegetables and tend to the crops. 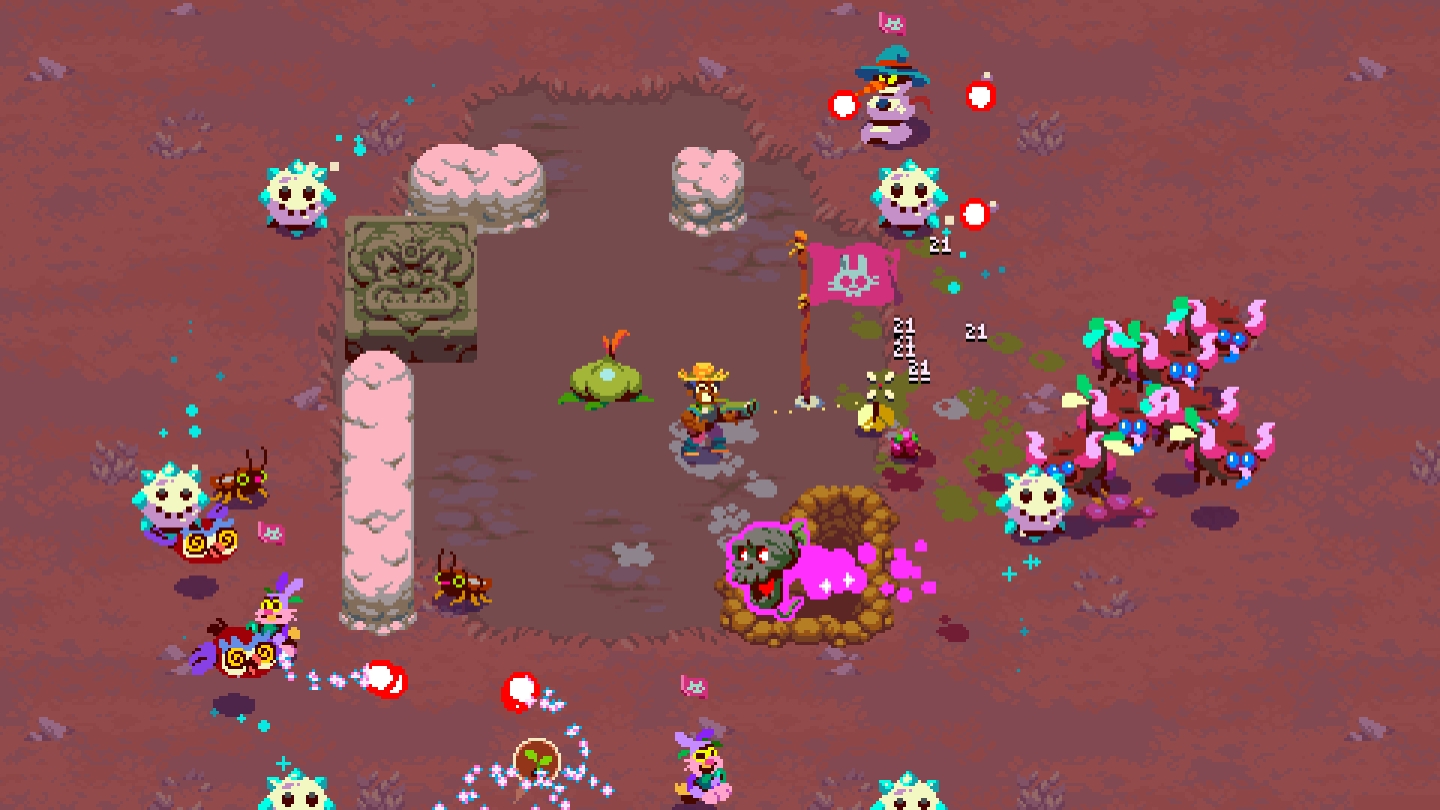 It all sounds like a challenge and it sure is. But not necessarily because having to juggle all of these goals sounds complex. No, those mechanics are handled perfectly. Instead, where Atomicrops creates a challenge is in all of the little things. As if every time someone questioned if the game was getting too easy during development, Bird Bath tinkered with a small area, and then all of those small tinkers built up, and the result is a game that can easily frustrate players for several hours. In fact, perhaps I should just list all of those little ways the game gets your blood boiling…

For starters, health is incredibly rare. And this being a roguelike and a bullet hell game at times, you will be losing health a lot. It almost feels like there’s a one in a hundred chance that an enemy may drop some. Hell, even other roguelikes like The Binding of Isaac were more generous in this area. The only guaranteed way to gain health in between harvests is when you go back to town and purchase one from a single vendor who only sells one each time. And they only take roses as currency, which can be rare and take a long time to grow (unless you’re lucky or have certain mods). And of course, they increase the number of roses required each time as if to give you a middle finger.

Then there’s the fact that as a roguelike with randomized maps, Atomicrops’ random number gods can easily screw with you. As mentioned, one of the main reasons to venture into the wild is to gain seeds, since you need them to grow produce and thus earn money. You can also, however, find mods that grant passive abilities, farm animals that stroll around and help with the crops, items like turrets and scythes to expand your field, scrolls with spells that grant one-time boosts like watering all of your plants, and more. So there’s a lot to work with! Almost too much, in fact! Because if the map is cruel, that means you can stumble along a string of all these items yet find few seeds before you need to head back in time. The randomness also screws around in other ways as a bonus, like spawning the holes that warp you back to your farm at the very beginning of a biome, making them pointless.

One does not just merely pick up bonuses like those, though. To gain the vast majority of seeds and other goods, you needs to take out enemy camps. Only when all the enemies in the camp have been taken care of do your goodies become unlocked. Taking care of them can be a bit of a chore, however, due to the enemies having occasional tendencies to wander away a bit from the camp once combat has been initiated, as well as the amount of knockback your guns provide combined with sort range. And in a game where time can be of the essence, anything that can delay the fight further can be harmful. More harmful if you happen to hit any other enemy with a stray bullet, at which point they immediately chase you as much as possible. While the game expects you to tackle multiple enemies, it can easily get too crowded at times. And it does help that smaller enemies can also seemingly appear out of nowhere, complete with that one stray bullet which kills you. 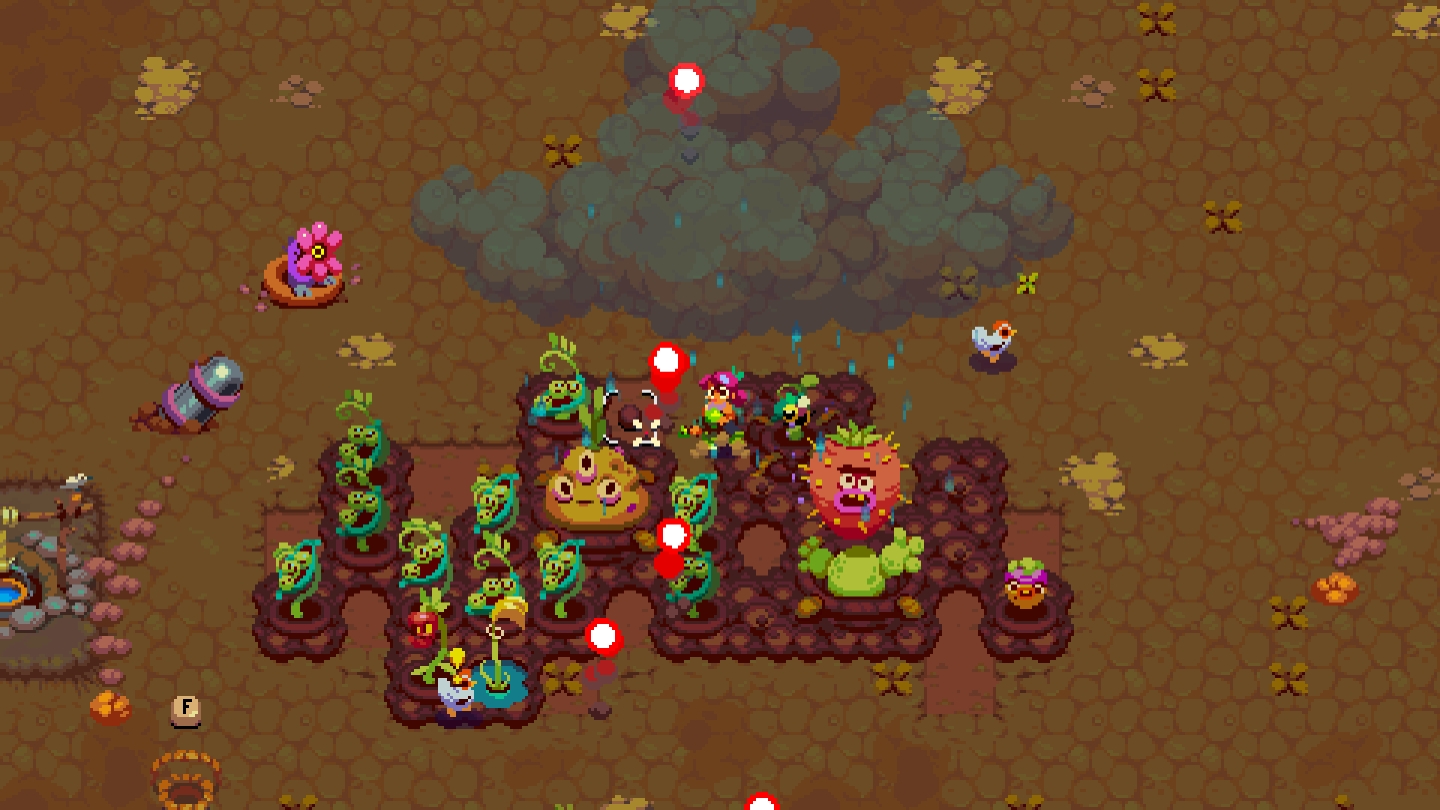 But as with most roguelikes of this nature, there are permanent buffs to unlock in between runs to help try and make things easier later. The only problem is that the one currency which unlocks them is cornucopias. How do you earn cornucopias? Well, at the end of every season (after three days of gameplay), you talk with the town’s mayor and have your harvests evaluated. The more food you’ve harvested, the more rewards you get and at the very top are the cornucopias. So if you’re thinking you can play it more safe or if you just have bad luck in gathering seeds and tools, entire seasons can be for naught in the long run. Oh, and like the health sold in town, the number of cornucopias required increases, because of course.

Now, all of those parts can be considered annoying, but one could write them off as individual, minor flaws and they’d be right. But the most damning part that contributes to the difficulty comes with the farming controls. Or at least with analog controls like the ones on the Switch at least. In order to simplify tasks to fit the more arcade-esque gameplay, one single trigger button is used to shop weeds, break earth, till soil and planet seeds, and holding it down achieves several of these objectives in a row over several parts of land. The only problem is that you still have to highlight the space you want to work with, mainly by facing the right direction. And later on the game, when your garden gets larger, more crowded, and filled with enemies to battle when the night comes, you can easily find yourself trying to plant a valuable seed, only to have your character attack a nearby weed that’s not harming things right now.

And then there’s watering the plants, which doesn’t even use a button. You just grab water from the well, walk over to a seed or plant that needs it and a jet of water shoots out to the closest plant. Unfortunately, when you have certain veggies that you want watered so that they can be harvested first, this makes things tricky. Now, these controls wouldn’t be bad if this was just a regular farming simulator, but as you may have noticed, everything about Atomicrops is far from regular. Again, you have mere minutes to work with for each harvest, the good chunk of which are spent under fire, and you need massive harvests in order to get the cash and rewards you need. So in the heat of things, they just feel awkward.

So yes, as the past several paragraphs can tell you, Atomicrops can be a rather frustrating game. And yet I keep coming back to it. 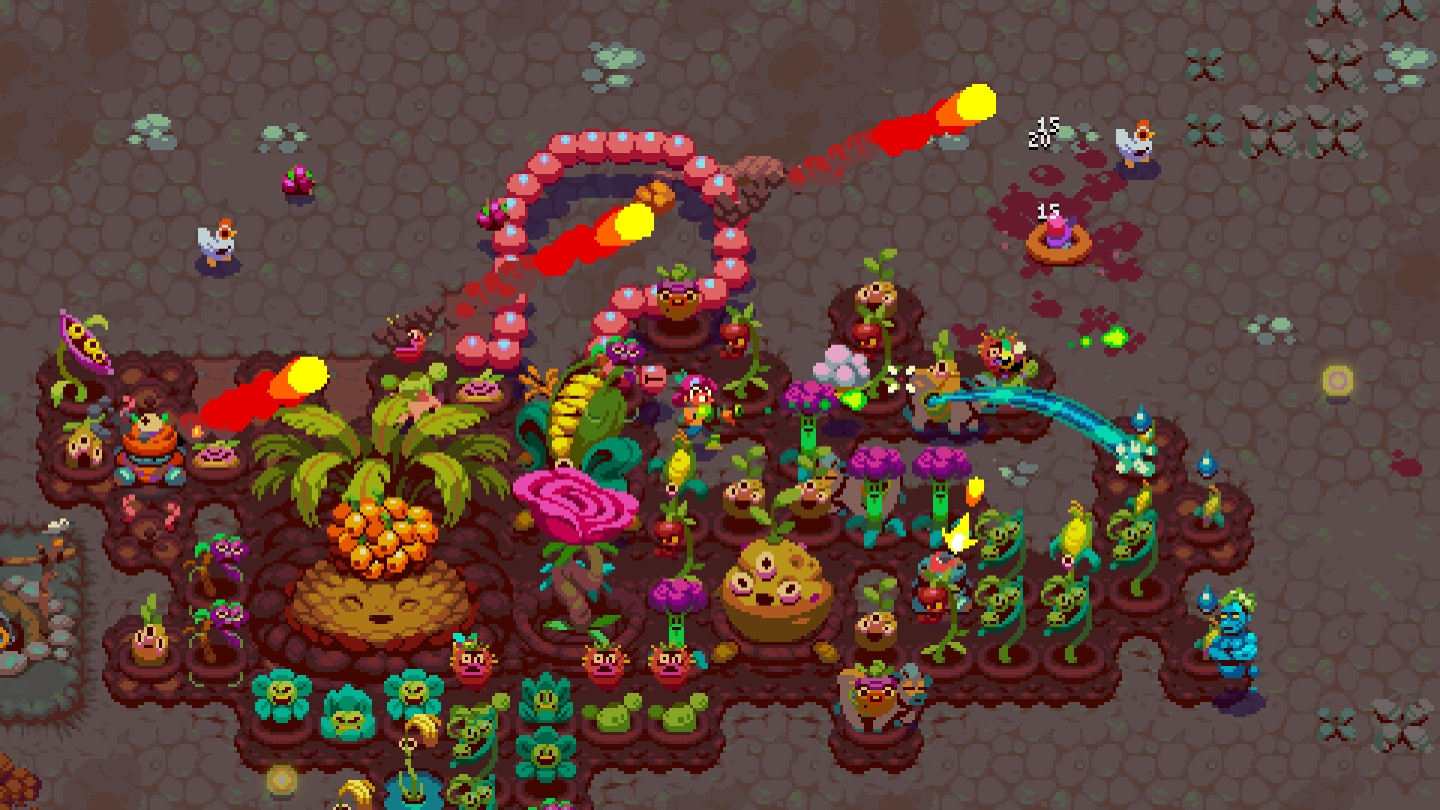 Yes, I must confess that this is one of those reviews I fear where more time is spent on the negatives than the positives. But again, awkward farming controls aside, the core mechanics and gameplay in Atomicrops are perfectly fine. And to answer the question posed way back at the beginning, it’s quite fun! Twin-stick shooters can be insanely addictive and enjoyable when executed properly, and blasting away countless mutant wildlife and the massive bosses that appear at the end of each season leads to a ton of enjoyment here as well, with huge gunfight filling the screen at times and requiring a lot of skill. Plus, even with four biomes (that can be unlocked and expanded upon with bridge repair kits that you can unlock and purchase), there’s still a lot of exploration to be had, especially in trying to find that game-breaking combination of mods and farm animals that yields humongous crops and allows you to survive for longer than usual.

In addition, there’s level of glee to be felt when it comes to certain objectives in Atomicrops. Be it fertilizing four of the same plants in a square to create, say, a potato the size of a car, earning said fertilizer by squishing a ton of enemies, or successfully getting married by delivering enough roses to one of the strangers in town, there’s a lot to shoot for. The latter is particularly notable since after unlocking mods from your potential partner with each gesture, getting married allows them to join you on the farm, either working in the garden, battling with you in the field and more (heck, a “Polygamy” mod can get you as many partners possible). In fact, finding and unlocking the rest of the farm animals to assist you in watering, weeding and digging creates the feeling of running a successful farm. There’s a notable level of strategy involved in getting the best harvests possible (even if the shootouts overshadow them), which is appreciated.

Finally, it would be an absolute mistake if I didn’t praise the graphics and soundtrack. Toby Dixon’s style makes for a perfectly twisted and cartoonish post-apocalyptic world, perfectly exaggerating every animal you fight and every googly-eyed plant jumping for joy, waiting to be plucked. It’s worth going throughout every area just to see what unique designs he’s cooked up. And the nice twang of the folksy, rural-sounding soundtrack is both appropriate for a farming game and yet a nice contrast to the warped world and mayhem-filled moments which you’ll encounter. It is indeed one attractive package, even if it’s ready to smack you in the face when you open it. 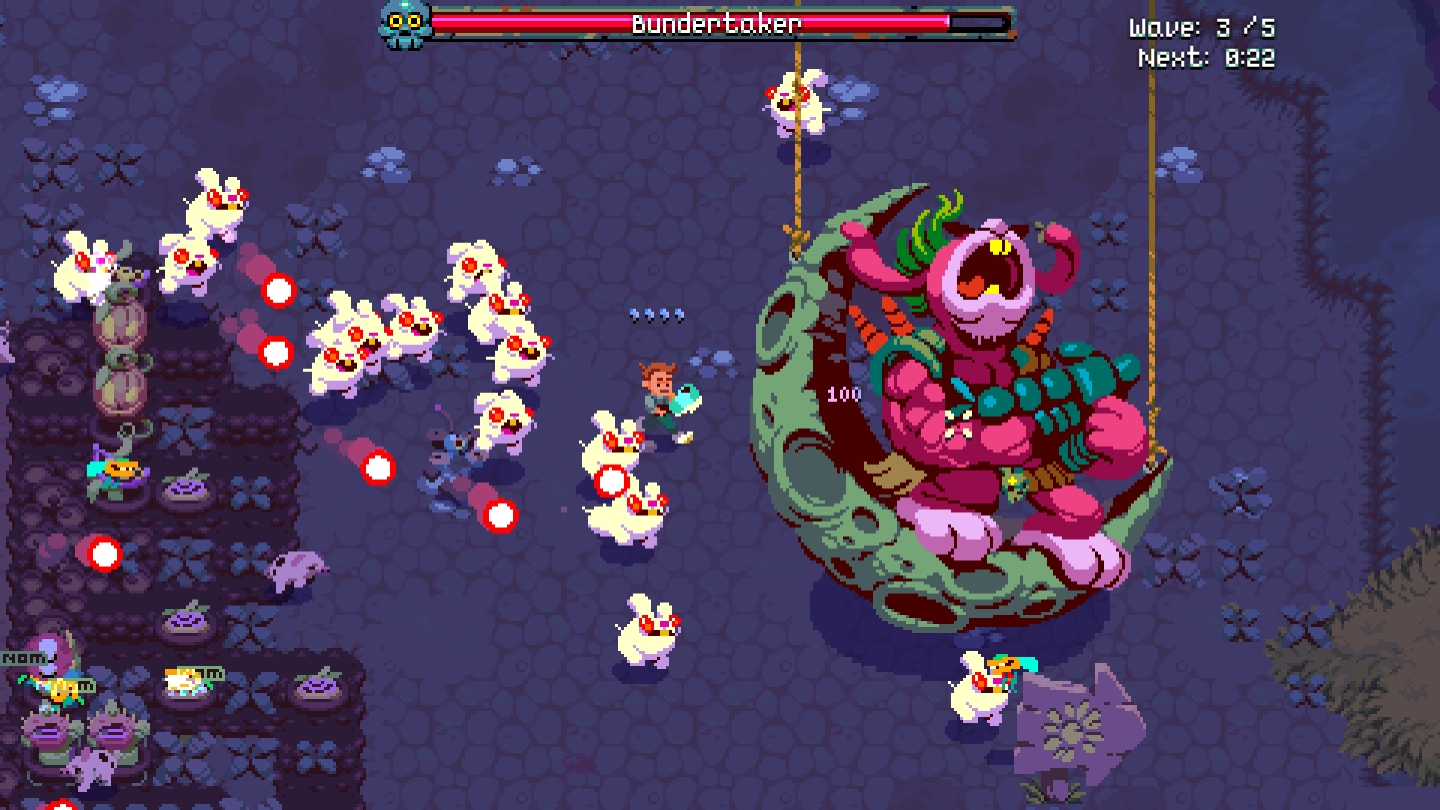 With a few more tweaks in certain areas when it comes to the difficulty and improved farming controls, Atomicrops could easily be a terrific roguelike shooter. As is, though, it’s still enjoyable, with great action that easily keeps you wanting more, a lot of goods to hunt for and try out in order to come up with a good strategy, and eye-popping, vibrant visuals that make astounding use of pixel art. It may be a tricky crop to tackle, but there’s still a rewarding experience here that’s worth checking out.