I think it’s only right to begin this piece by putting forth that the 4X brand of strategy is one I’m not particularly knowledgeable on; it’s not a field of games I’ve invested heavily in and it would be wrong of me to proclaim that my time spent with Humankind was preceded by immense knowledge I could compare developer Amplitude Studios’ work with. The decision to see what the Parisian developer were cooking up is both an aspiration to delve deeper into this sub-genre as it is a genuine intrigue as to how the studio were hoping to differentiate their latest project from their now-established Endless series.

The good news is that, first and foremost, I’m glad I did. Fans of the studio’s past works are sure to quickly catch onto the figurative prints here. Ones that cover a lot of the breadth of long-term decision-making and real-time plotting a course. Where exactly to finally settle when it comes to establishing your first city, right down to how far you’re willing to send your initial troops to scout out valuable resources. From the development of new infrastructure to climbing up a figurative ladder of better research and new technology, if you’re the kind of player who relishes being at the helm of a growing populous — here, in Humankind, starting off as little more than a meager tribe reliant whose first priority is scavenging food — everything seems to relatively slot in place, with plenty of alternatives to consider. Do you wait a set number of turns for a project to see completion or do you use money as a sort of “fast-travel” to reach said destination. And what of secondary outposts outside your main city; do you keep them for mining resources, transform them into stand-alone cities or do you create a network that allows controlled territories themselves to link up? 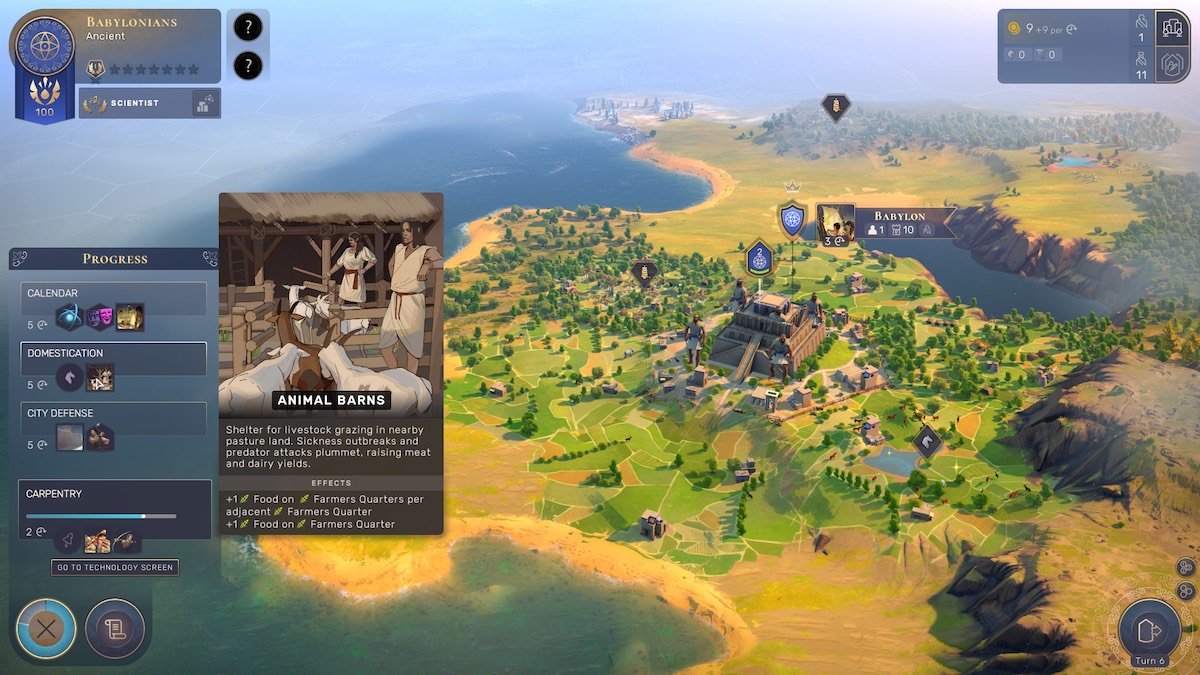 There are plenty of pros and cons to consider in Humankind, as no one route is absolute with its benefits. The resulting consequences too may not be immediate, and as is the case with the emergence of numerous events that pop up during a player’s campaign, sometimes these decisions can ripple across many eras. Events that thrust a dilemma at the player, requiring you to make a choice from multiple options — whether that be determining if priests should be male, female or both, or if the threat of rat infestations should be left to cats at the cost of a lesser area of coverage. Humankind is a more personal, tailored approach to civilization-building that aims to borrow from our own historical legacy. What culture you decide to play as at the beginning, as varied as the ways in which you can accrue the primary current of success: fame.

Because Humankind emphasizes an acknowledgment of player choice — and of the variety this brings — the objectives with which you need to fulfill in order to gain Fame, differ on a culture-for-culture basis. There are some overlaps naturally; being victorious in a select number of battles are on the to-do list of cultures you may not exactly associate with combat or militaristic might. As is the general accomplishment with your getting your city over a particular population threshold.  The point is: Humankind doesn’t want to give the impression that victory is sought through might and force alone. You could theoretically go through the whole campaign without ever fighting a single battle. It sounds impossible, especially when you catch sight of foreign troops affiliated with other territories snooping around and even veering into your own land. But again, Humankind leaves the perception of a potential problem — let alone a problem in of itself — entirely up to the player. 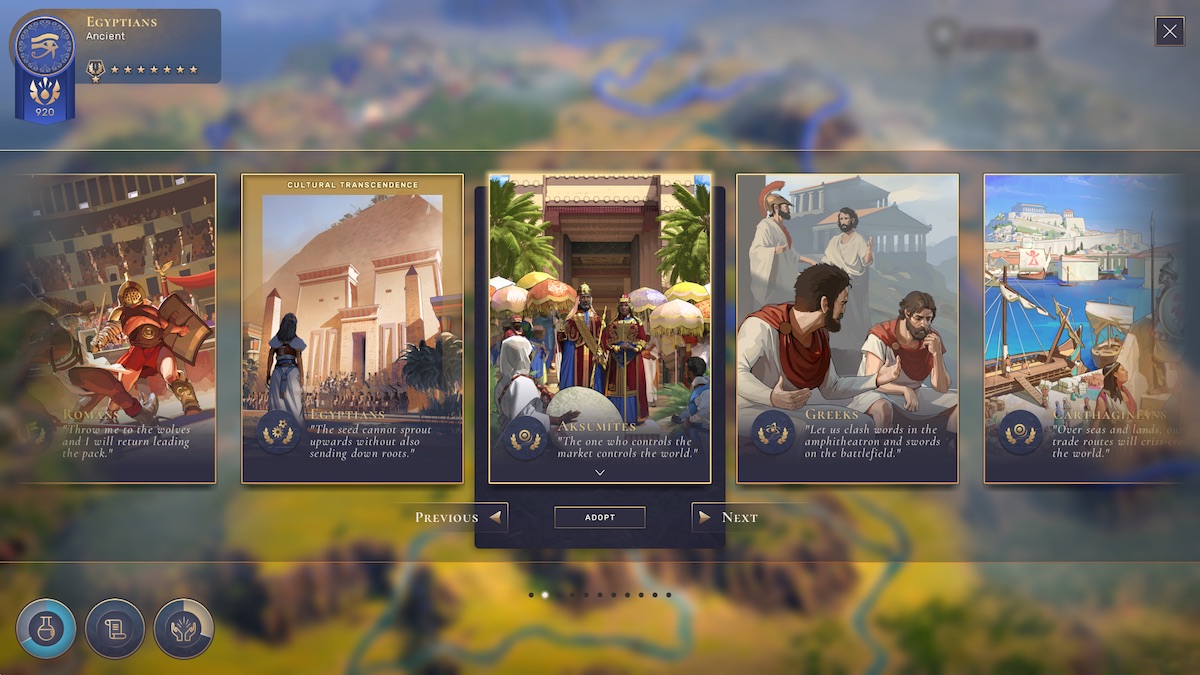 Sometimes encounters such as this as inevitable. One of the reasons for venturing out the comfort of your territory is the all-encompassing Fame value. Discovering natural wonders — alongside additional resources to exploit — as feasible a reason to expand, as being the first to achieve some technological/cultural wonder. Netting you an exclusive reward that nearby/foreign civilizations have now missed out on claiming themselves. That competitiveness isn’t mandatory, but the dangling prize never vacates a player’s mind for too long. But a completely isolationist or ethno-national state are not simply dismissed or perceived as out of the question either; rather than adding to your city with new cultures at the end of each of the in-game eras, you can instead have that starting culture enter into what the game refers to as a “transcendent” state. You may not gain the benefits of additional cultures, but it might prevent things from being spread out a little too thin. Much like the dilemma of establishing outposts that could become cities in due course, how much you’re willing to bet on the distribution, or perhaps tight concentration, of how your civilization looks will vary.

But the best part of all this decision-making in Humankind — how it all comes together — is the lack of thrusting players into an unintentional decision. Of course it’s always advisable to keep a watchful eye on what neighboring territories may be getting up to, but not for a second does the game want its players to enter into some out-of-character battle or confrontation. Yes, troops of another banner may venture into your territory — they may get a little too close for comfort, as happened with my own brief campaign. So when you have a great emergent moment like feeling that a stand-alone combat encounter, whereby the game enters into three-turn, turn-based tactics is necessary, it feels like a bit of assumptive, player-made, decision-making. A short-term “bad” for what could be a long-term good for your people. It may not be the right decision (it could have massive repercussions when it comes to the diplomatic side of things), but it still all feels organic. For someone like myself whose first priorities aren’t on the complexities or intricacies of its city-building (though they benefit), these kinds of moments spur you on to both rectify and grow. 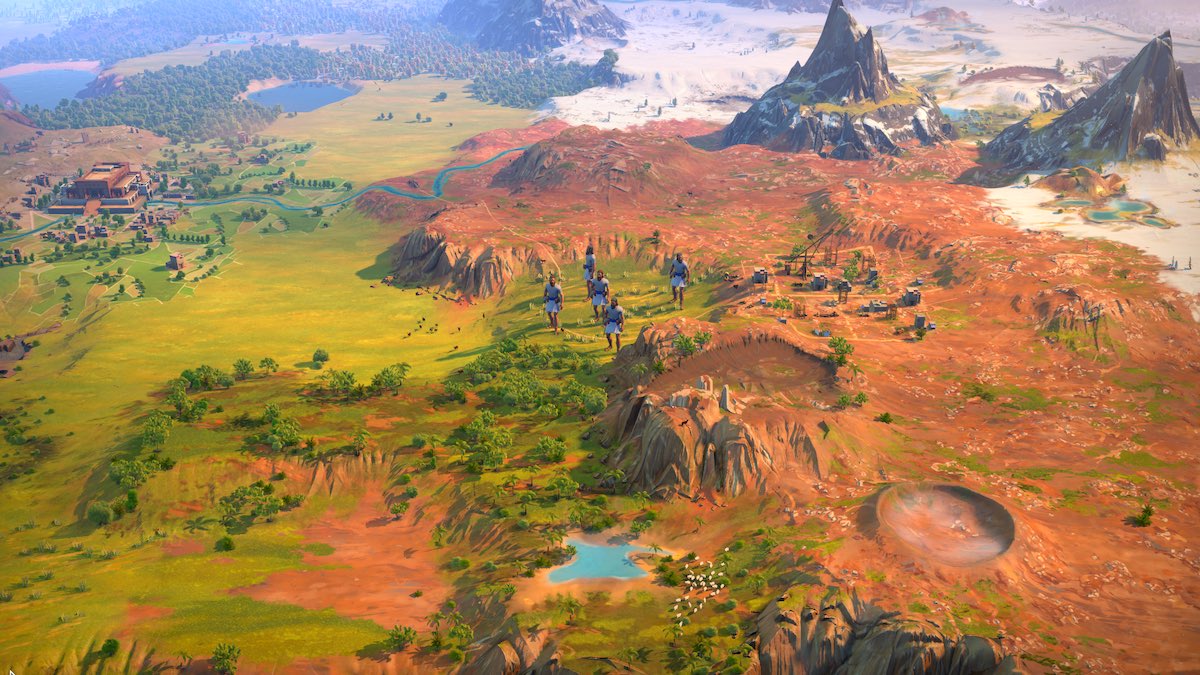 But this is only a snapshot of the early parts with many of the latter components — such as advanced combat, diplomacy and the variety of ways in which players can approach conquering/annexing another’s territory — left out of the preview build on show. And with Humankind‘s push back into 2021 comes the possibility that Amplitude may well make considerable adjustments to how effectively players are thrust into the position of balancing the growth of their civilization with the impending — perhaps confrontational — contact with other, once similarly-isolated factions. Even so, to look at this through the lens of someone having barely invested all that much into the 4X brand of real-time strategy up until now, Humankind is, like its gameplay, built with balance in mind. One that looks to invite those whom may initially be put off by menus and fragmented components, yet doesn’t feel watered down for those who find curiosity in dabbling with the many social and evolutionary steps the game eventually opens up.

Even still, take out all the systems and menus and long-term choices to decide upon, even from as early a glimpse this is, it’s comforting to find even complete newcomers to this sub-genre can invoke a feeling of emergence from out its in-game interactions. If there’s one thing Amplitude have hit on, it’s the practice of not overwhelming its community — returning faces or completely new alike — with dilemmas and potential dangers to circumvent. Humankind doesn’t want to be dictatorial or for its players to feel combat is inevitable. It’s because of such a tailor-made vibe and a liberty with how players progress from one era to the next where its greater promise — and the potential for even more emergent moments — could bloom. The game may be a fair distance away from final build, but as a foundation, Humankind’s grand voyage has already made a good, promising first step.