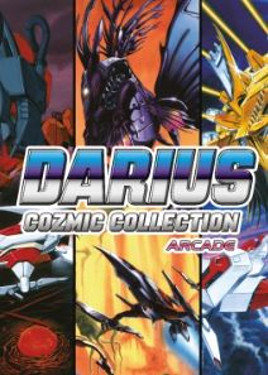 2D shoot ’em ups aren’t in huge demand these days, but once upon a time they were common staples in the arcade and console market. Darius was one such franchise, and while it didn’t seem to have the name recognition as Gradius or R-Type, it was still a respectable series and deserving of the attention of any shooter fan. An extensive collection of Darius games is now available for PlayStation 4 and Switch. More specifically, two extensive collections are available as there were enough games to split into two collections, Darius Cozmic Collection Arcade and Darius Cozmic Collection Console. While this review will specifically be about the Arcade Collection, most of what can be said applies to the Console Collection and if the Console Collection were to be given a formal review the same score would apply as the two collections are basically identical in their presentation of their respective games.

Something that is always nice about collections such as this is being able to witness the evolution of a franchise. The graphical leap from Darius to Darius II is significant, and the introduction of choral elements to the soundtrack in Darius Gaiden almost a decade later showcases how game evolution can be substantial over a period of short years. Some of the Darius games were originally presented with atypical aspect ratios and playing them in the original ratio adds to the authenticity of the ports. The differences between the the versions of the same game are much more subtle but noticeable enough where its apparent that there are actual differences between each version. There isn’t much bonus content or historical documents with this collection. There is a paragraph for each game giving a little history about it and what changes were made which does provide some historical context to everything but the total amount of text included in the collection to the describe each game is shorter than this review. 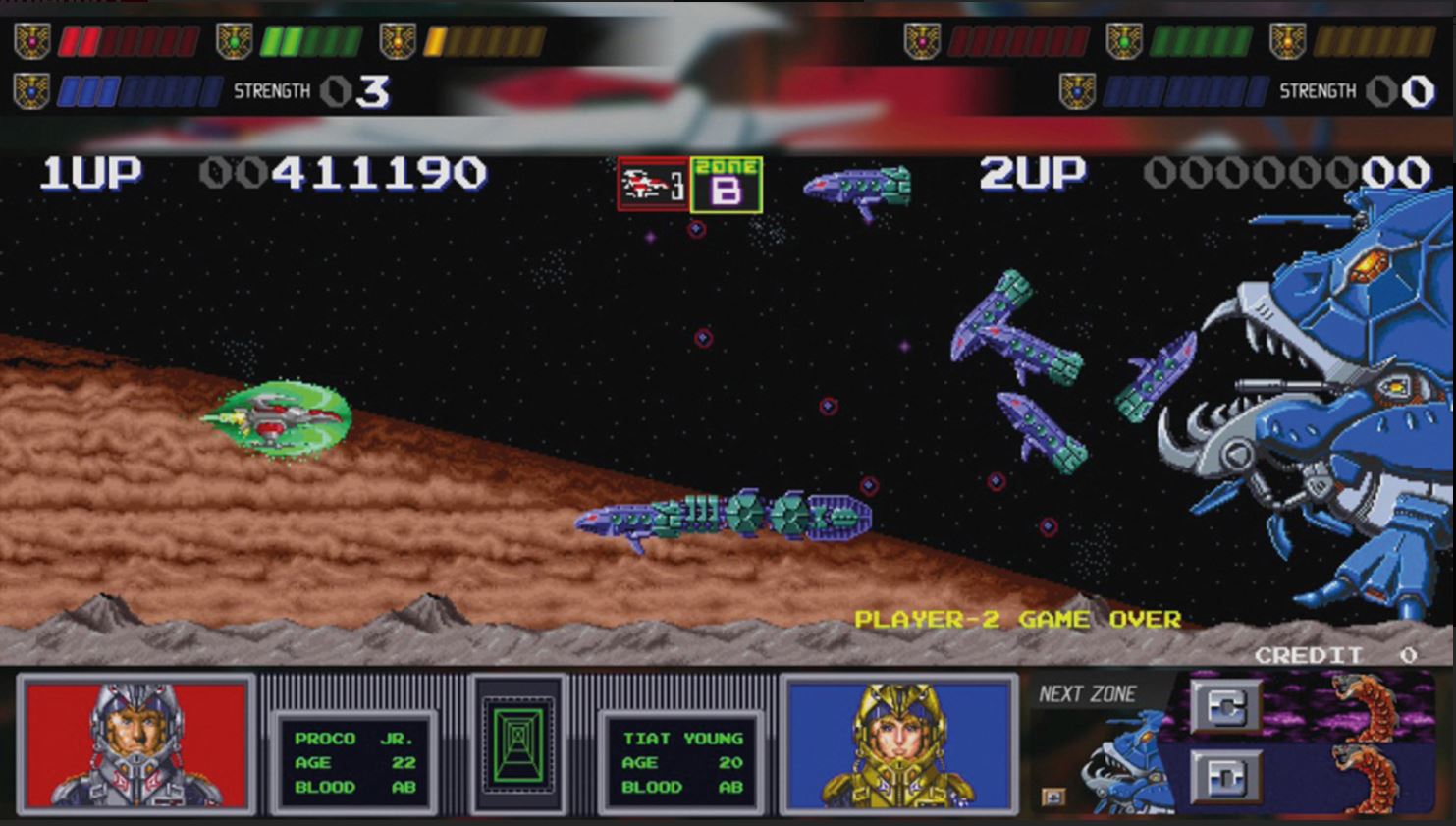 Darius games are 2D horizontal spaceship shooters going against gigantic alien robots that resemble marine life. It seems like a strange design choice but it does set it apart from other shooters and having interesting looking things to shoot at does make the games more enjoyable. There are power ups that make the ships gunfire more powerful but like many of these games death takes away all the accumulated power ups. The two player co-op mode makes the game more enjoyable and also makes the difficulty much more forgiving, allowing the player to respawn at the point of the demise instead of at the beginning of the level. Darius titles do have branching level paths so multiple playthroughs are more interesting since they can put the player in different environments with different enemies. All the included games were emulated well and the only noticeable hiccups when we played through all of them was there were a couple levels in one of the versions of SAGAIA that had no sound for the first few seconds of the level. Aside from that every game played as expected and were a good does of retro arcade fun.

The biggest complaint about the Darius Cozmic Collections is that there are two of them. Both collections are full of enjoyable games but the combined count is ten games with sixteen versions (Four games, seven versions on Arcade and six games, nine versions on console). Compared to other retro compilations, the amount of games and minimal bonus content makes conquering the collection an expensive endeavor for the Darius completionist. On the PlayStation Store the Arcade Collecton is listed for $44.99 and the Console Collection is currently listed at $77.99, though that may be an error since it was advertised as $59.99 and listed for $59.99 on the Nintendo Online Store. Also, despite getting numerous trophy notifications during the review, the game still doesn’t show up in my user profile trophy page as of writing, a day after the game’s release. 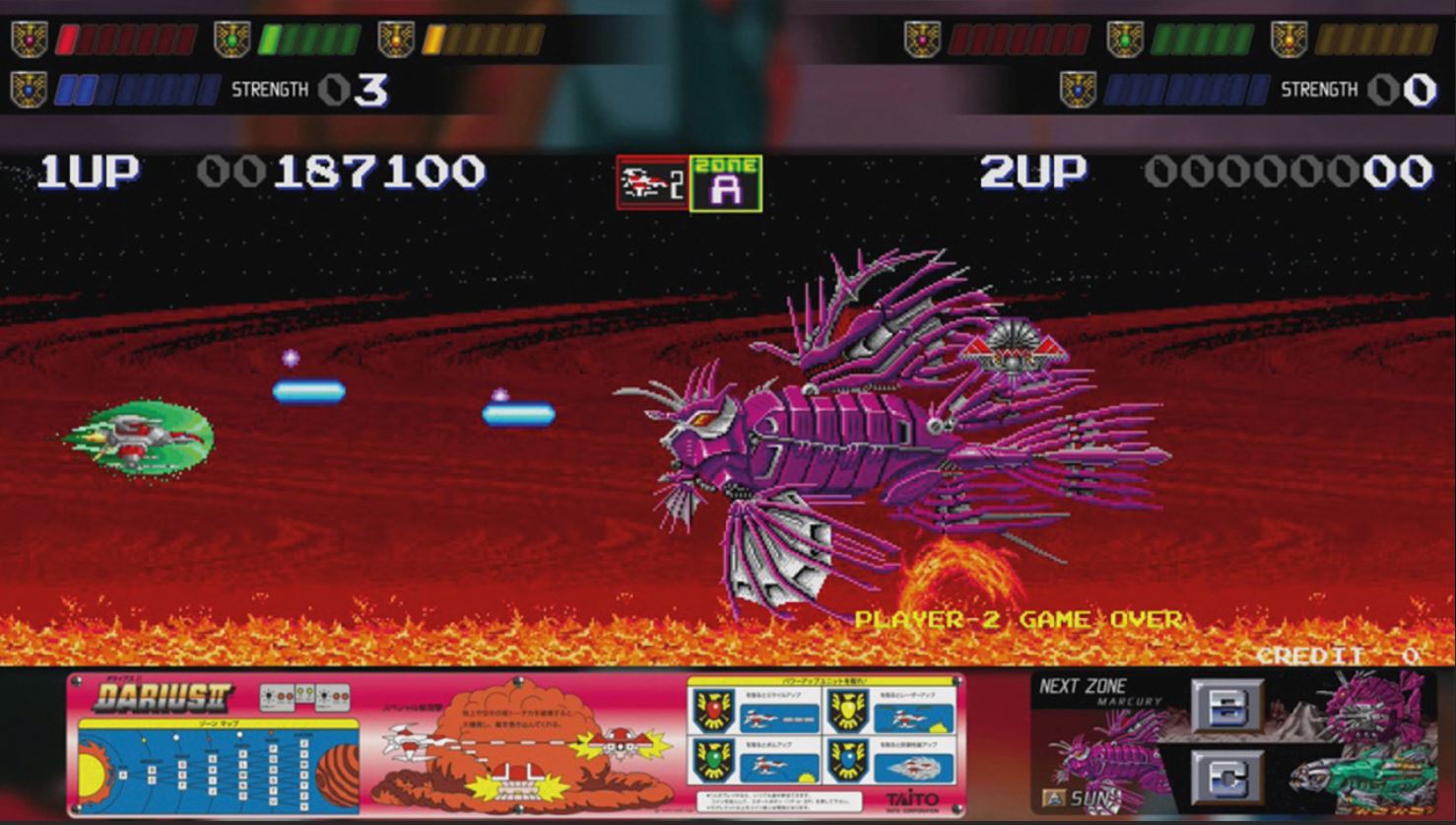 Darius Cozmic Collection does offer a lot of enjoyment for fans of shmups, regardless of which version is played. It can be criticized for being a cash grab attempt for splitting the arcade and console titles into two separate collections when combining them into one would still be comparable to many other retro collections. But those complaints aside, each collection does a good job at preserving an authentic classic Darius experience as there is something inherently fun about teaming up with a buddy to blast some robot fish. The Darius games aren’t readily available on too many other formats so it’s nice to finally be able to enjoy them on modern consoles. During the review process both collections were enjoyable, but if you were to only get one, the recommendation would go to the Arcade version unless you have specific nostalgic feelings for a console title like Darius Twin.

Update 6/23/20: Darius Cozmic Collection Console on PlayStation Network Store has had the price changed to $59.99. Trophies still have not synced.