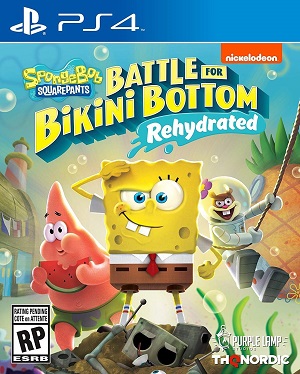 SpongeBob SquarePants: Battle for Bikini Bottom Rehydrated follows the titular sponge as he attempts to save Bikini Bottom from destruction by robot. Plankton is yet again trying to capture the Krabby Patty Secret Formula. For his latest scheme, Plankton intends to use his new Duplicatotron 3000 to build a robot army. Unfortunately, he forgets to flip on the ‘obey’ switch, which sets the robots loose on a rampage. To save Bikini Bottom, SpongeBob must work with Patrick and Sandy to take out all the robots and prevent Plankton from stealing the formula.

Purple Lamp Studios has done nothing to alter the original story of the game, which isn’t a bad thing. Battle for Bikini Bottom Rehydrated’s story comes off as an extended episode of the show. The game perfectly captures all the humor and characterizations of its wacky ensemble. Nearly all the original actors reprised their roles back in 2003, allowing for a genuinely authentic game. There are quite a few laughs to be had, especially for anyone familiar with the character. 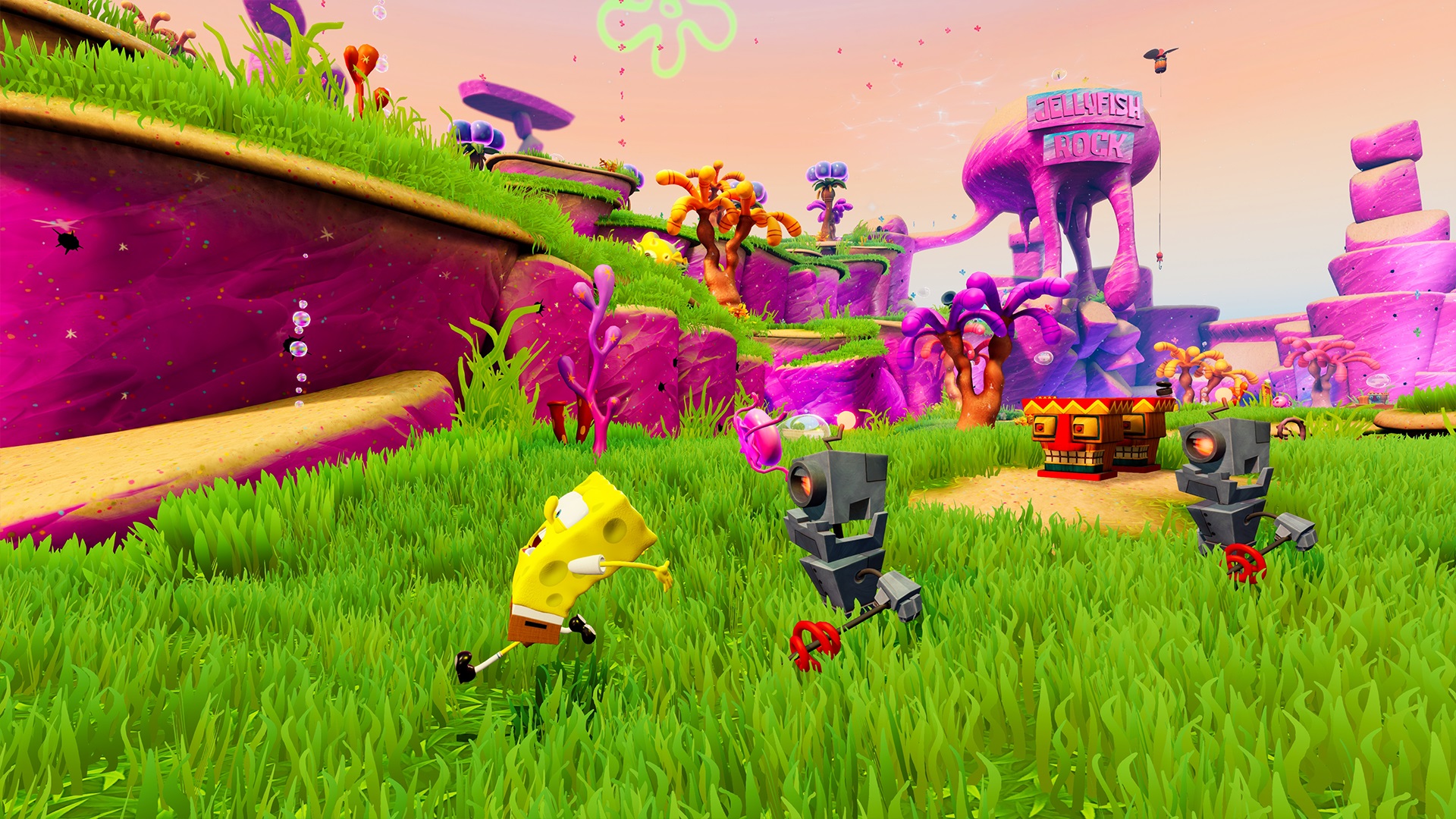 Battle for Bikini Bottom Rehydrated’s story was nailed perfectly back in 2003 and remains a source of joy in 2020. Lasting 10-13 hours, the game is fun to play through, though it’s also true there isn’t anything new here if you’ve already played it. The game plants players firmly in SpongeBob’s world. Bikini Bottom serves as the central hub, with players able to hop between familiar locales like Jellyfish Fields, Rock Bottom and Kelp Forest. Though the game does limit where players can travel to at first. To get to these locales, players must collect Golden Spatulas, which act similar to Stars in a Super Mario game. Collect enough and you’ll be able to access additional areas in Bikini Bottom.

At its core, Battle for Bikini Bottom Rehydrated is a game about collecting objects, but the game does keep things fresh with a variety of locations and making sure none out-stay their welcome. Many of the Golden Spatulas are tied to the main quests of each area or acquired by completing mini-games within each level. Others can be obtained by trading in the other resources, Socks and Shiny Objects, to Patrick and Mr. Krabs, respectively. Levels are well-designed with familiar characters to interact with. They’re good at pushing players forward with the promise of a Golden Spatula at the end of the level and several others in between. The only real problem is that once you beat a level, there isn’t much incentive to go back. In fact, the game is so generous with the amount of Golden Spatulas players can obtain, it’s possible to skip some locations if you wanted to race towards the ending. 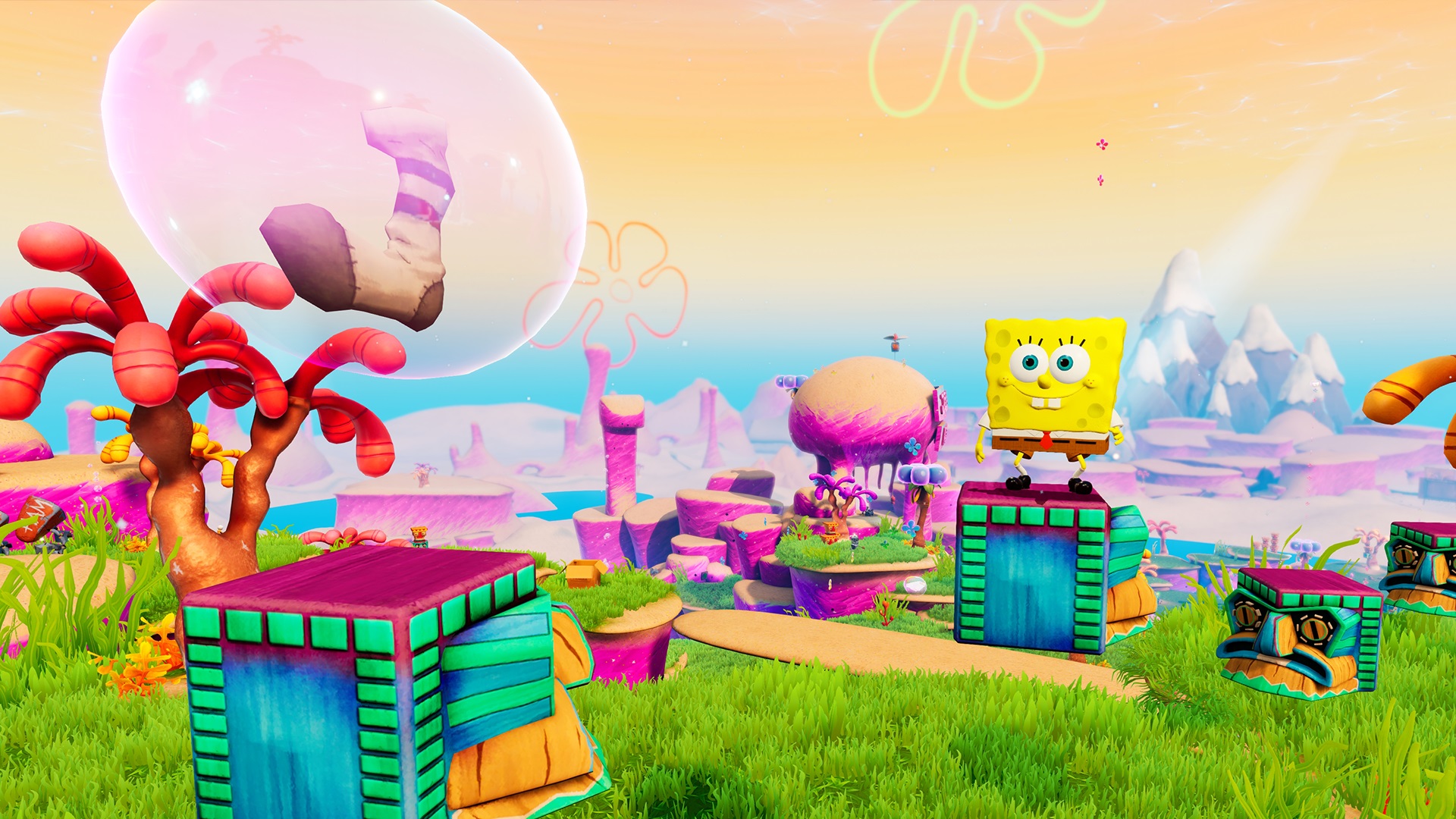 SpongeBob SquarePants: Battle for Bikini Bottom Rehydrated is, at its heart, a platformer with some melee action thrown in. You’ll spend most of your time playing as SpongeBob, though each level allows you to swap between either Patrick or Sandy to solve different puzzles. Each character has their take on jumping and attacking, and you’ll need to switch often to get all the Golden Spatulas and hidden Socks. SpongeBob can hit objects above him with his bubble Viking helmet, Patrick can throw different fruit variants and Sandy can use her lasso to glide across chasms or grapple onto Texas-shaped grappling hooks. Both SpongeBob and Sandy play precisely as they did in the original game. Patrick, however, has gotten a slight tweak that allows his attack to be executed while in the air. Later, SpongeBob can learn two additional moves, but neither do much in combat. Unfortunately, there have been no other additions to alter Patrick or Sandy’s movesets, which feeds into the gameplay’s most significant issue.

Battle for Bikini Bottom Rehydrated never evolves beyond its core mechanics introduced from the get-go. The game is too easy, rarely challenging players to come up with new move combinations or finding different ways to overcome obstacles. There’s only one way to attack, one way to tackle each enemy and one differentiation between the three characters. The game is meant for kids, but that doesn’t mean there can’t be interesting ways to engage with players. The gameplay is mostly held up by its use of the franchise’s many staples. It’s that aspect that keeps players engaged, not the gameplay. 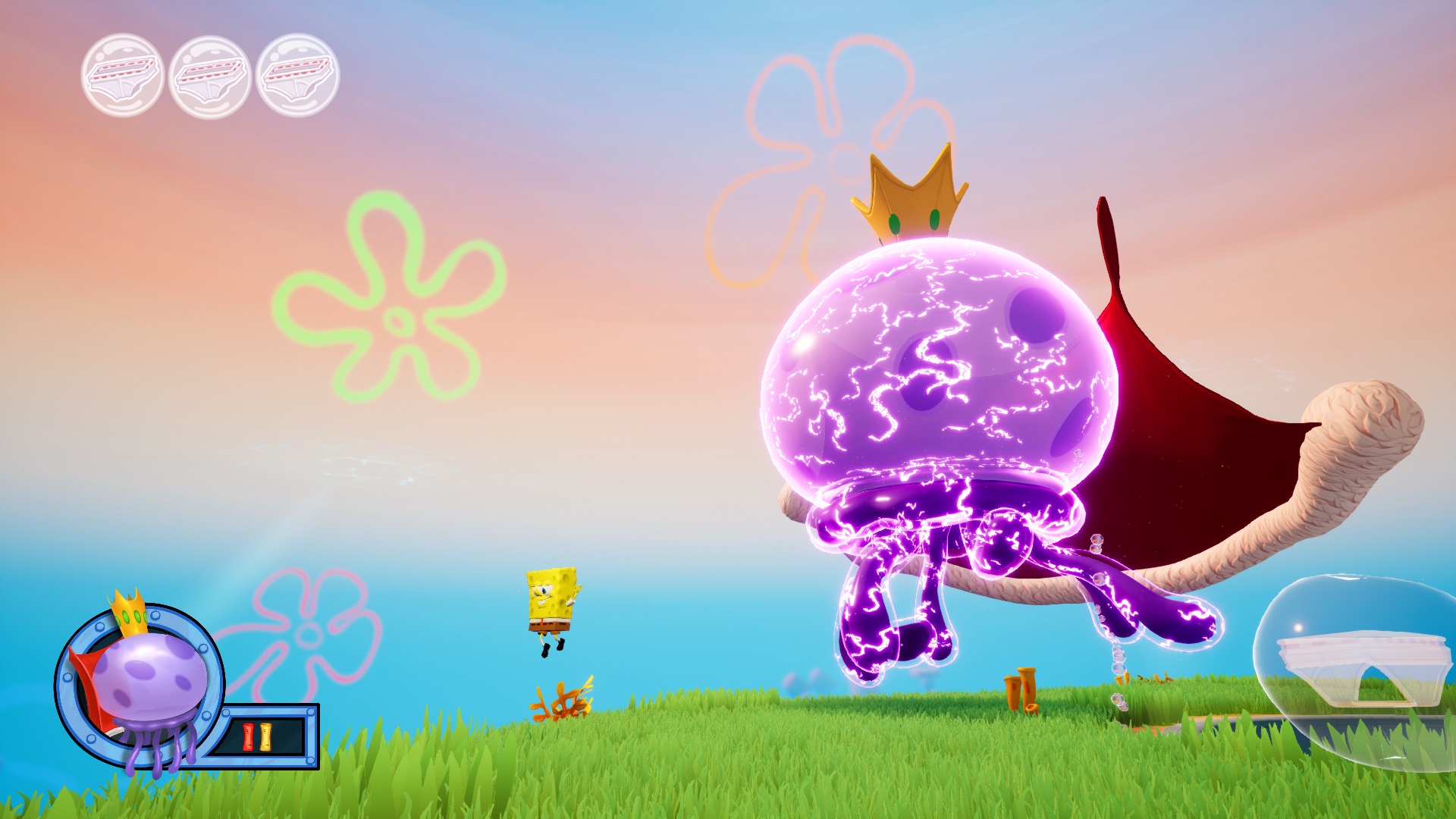 Purple Lamp Studios’ significant new addition to the game is a multiplayer horde mode. Here, up to two players battle robots across 26 islands. In addition to the campaign’s three playable characters, Squidward, Mr. Krabs, Gary and Robo Plankton are also playable. As cool as it is to see new playable characters and Robo Squidward (who was cut from the final game in 2003), the multiplayer mode is a dud with none of the campaign’s joy or personality. It’s a mode that takes itself too seriously with dire and somber music playing in the background. It’s an oddly serious choice that conflicts with the game’s tone. SpongeBob SquarePants: Battle for Bikini Bottom Rehydrated is a fun game that utilizes the franchise to develop great levels oozing with personality, but the game is let down by its simplicity. There’s plenty of joy to be had in the campaign, but that joy is sucked out by the weirdly serious multiplayer.

Original developer Heavy Iron Studios did a good job translating the show’s art style into a video game in 2003. Purple Lamp Studios, however, have easily surpassed that with their work. The game perfectly captures the vibrancy and colors of SpongeBob SquarePants. Like any great remaster, there’s nearly nothing in the game that has gone untouched. Models have been updated to include more detail, textures are more colorful and natural, and environmental detail is through the roof. Bikini Bottom has been faithfully recreated and it’s gorgeous to play through.

It’s even better to listen to thanks to familiar musical themes and the original actors. Though no new lines were recorded, the original cast, asides from Mr. Krabs and Mermaid Man, all reprised their roles for the 2003 original. There’s nothing quite like booting up the game and hearing Tom Kenny’s actual voice come out of SpongeBob. The only hiccup with the presentation lies in the cutscenes. As good as the models and textures look, the facial animations never look quite right. There’s something robotic and sixth-gen about them, almost as if they were untouched during the remastering. It’s a slight blemish on what is otherwise an excellent interpretation of the source material. 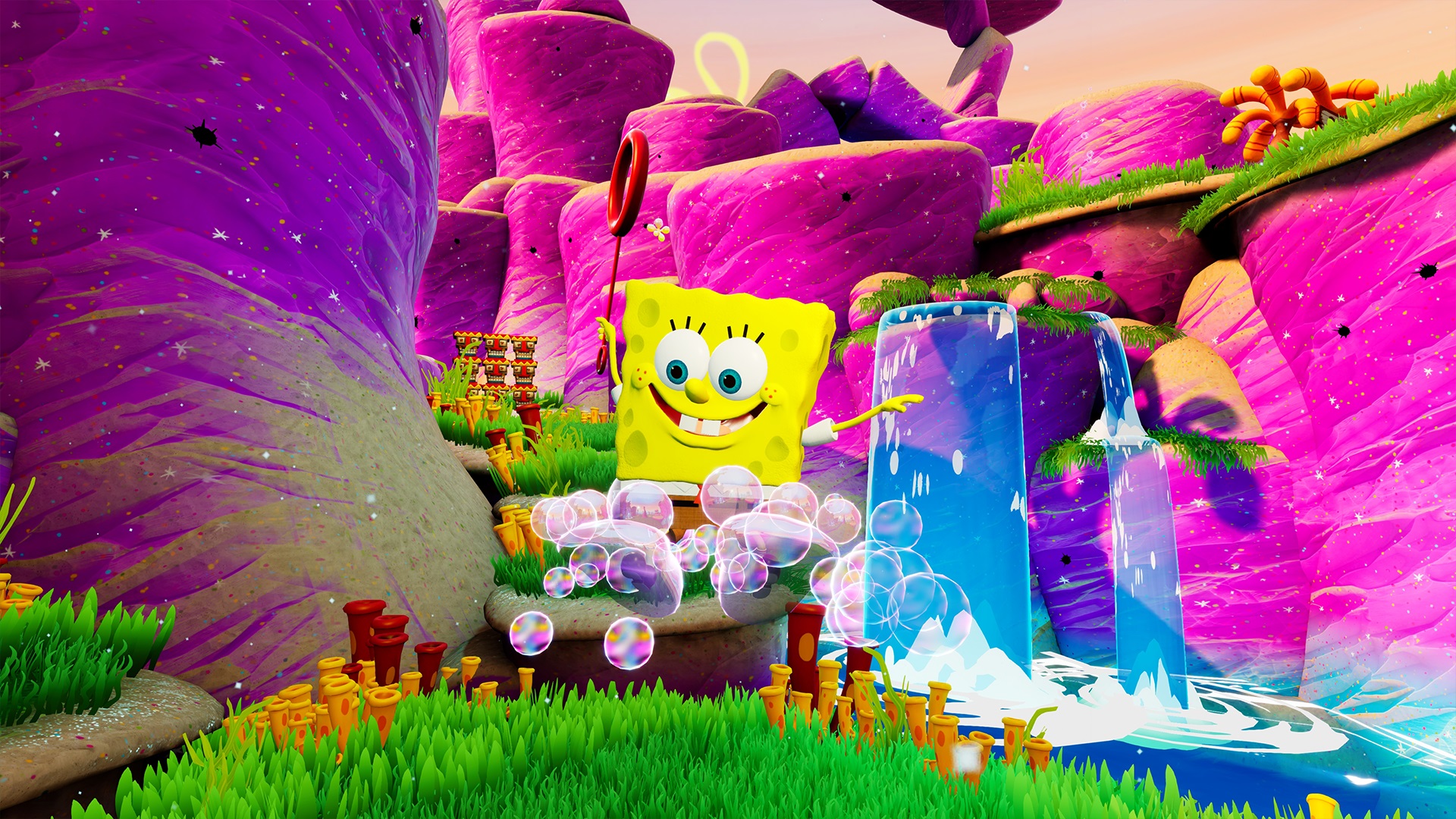 Nickelodeon and Stephen Hillenburg stumbled upon something unique when they created SpongeBob SquarePants. SpongeBob’s infectious positivity has allowed the show to continue to this day and spawn numerous films and games alongside it. SpongeBob SquarePants: Battle for Bikini Bottom Rehydrated is a solid remaster of the 2003 original. Though the story hasn’t changed, the charm and wit that defined the original release remain as strong as ever. Exploring the faithfully-recreated locales is quite the experience for any SpongeBob fan, and the beautiful presentation and original voice actors ensure you remain immersed. It’s unfortunate that the gameplay remains as simple as it was in 2003 and that the new multiplayer mode lacks any of the charms of the campaign. There’s little new for returning players to sink their teeth into, and if you’re not already a fan, not a lot of depth to keep you engaged. For fans and those who want to relive the joy that is SpongeBob SquarePants: Battle for Bikini Bottom,  however, Rehydrated still delivers all the humor of the original all while sporting a slick coat of new paint.