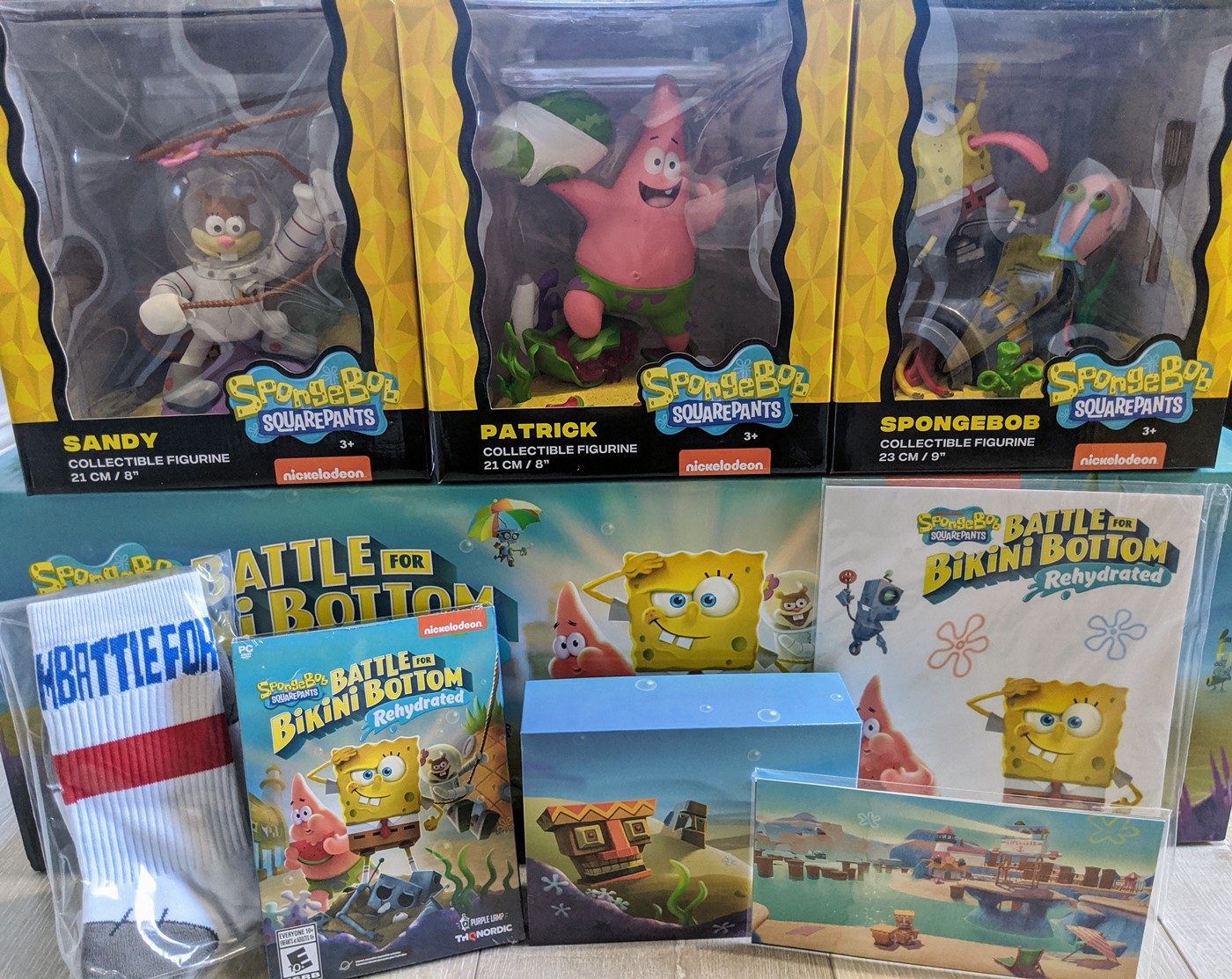 SpongeBob SquarePants: Battle for Bikini Bottom Rehydrated is one of the most unexpected remakes out there. The game originally released on PC, PlayStation 2, Xbox,and GameBoy Advance back in 2003. Due to being based on the incredibly popular SpongeBob SquarePants cartoon, it sold well. Regardless, companies tend not to remake games based on shows like this. Over the years, the fanbase for SpongeBob SquarePants: Battle for Bikini Bottom grew and the console version even gained a cult following. Now the game is available once again for $30 digitally or physically on PS4, Switch and PC. 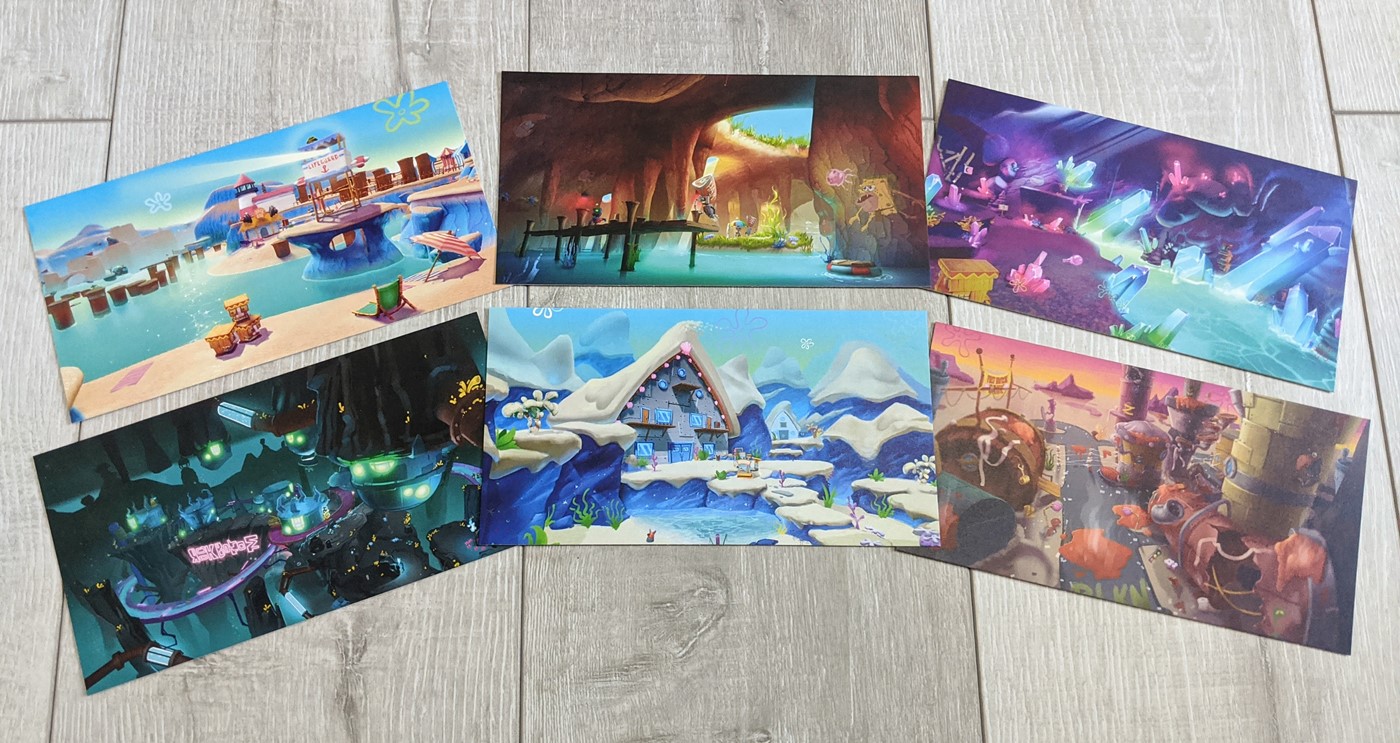 First, let’s discuss the items in common between the two editions since $150 is more palpable than $300. Both editions come with a pair of socks, stickers, lithographs, SpongeBob SquarePants figure and a copy of the game itself. The pair of socks are clearly sized for adults (22-24 cm) and are based on- – but not identical to — SpongeBob’s own socks. The six lithographs all display different world designs from the game. Printed on cardboard, they all have a nice weight to them and a matte finish on the artwork side. The sticker sheets are great fun. Each is about the size of office paper and comes with four or more stickers. It’s a shame there aren’t more secondary characters included as stickers. 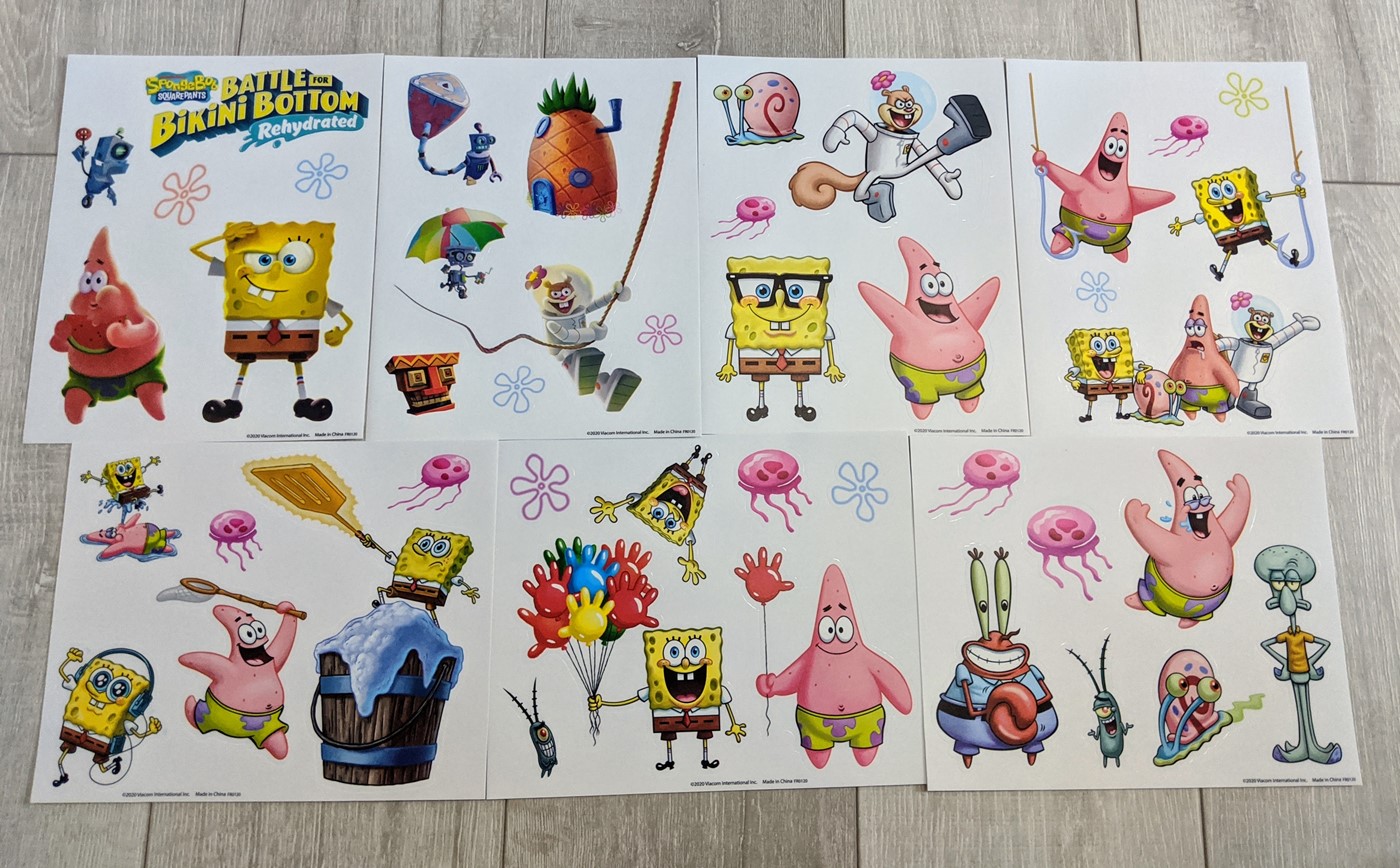 What is included in the SpongeBob SquarePants: Battle for Bikini Bottom Rehydrated F.U.N. Edition specifically that isn’t in the Shiny Edition? Also included are a set of five colorful Tiki keychains. Alongside the same SpongeBob SquarePants figure, you also get Patrick and Sandy figures. The keychains are a cute addition that would look great on a backpack or to throw on a key ring. Of course, the keychains aren’t what makes this edition double the price. Not by a long shot. It’s obvious that the inclusion of Patrick and Sandy figures are what add additional expense to the set. It’s great that the figures are of high enough quality to actually deserve the price increase. 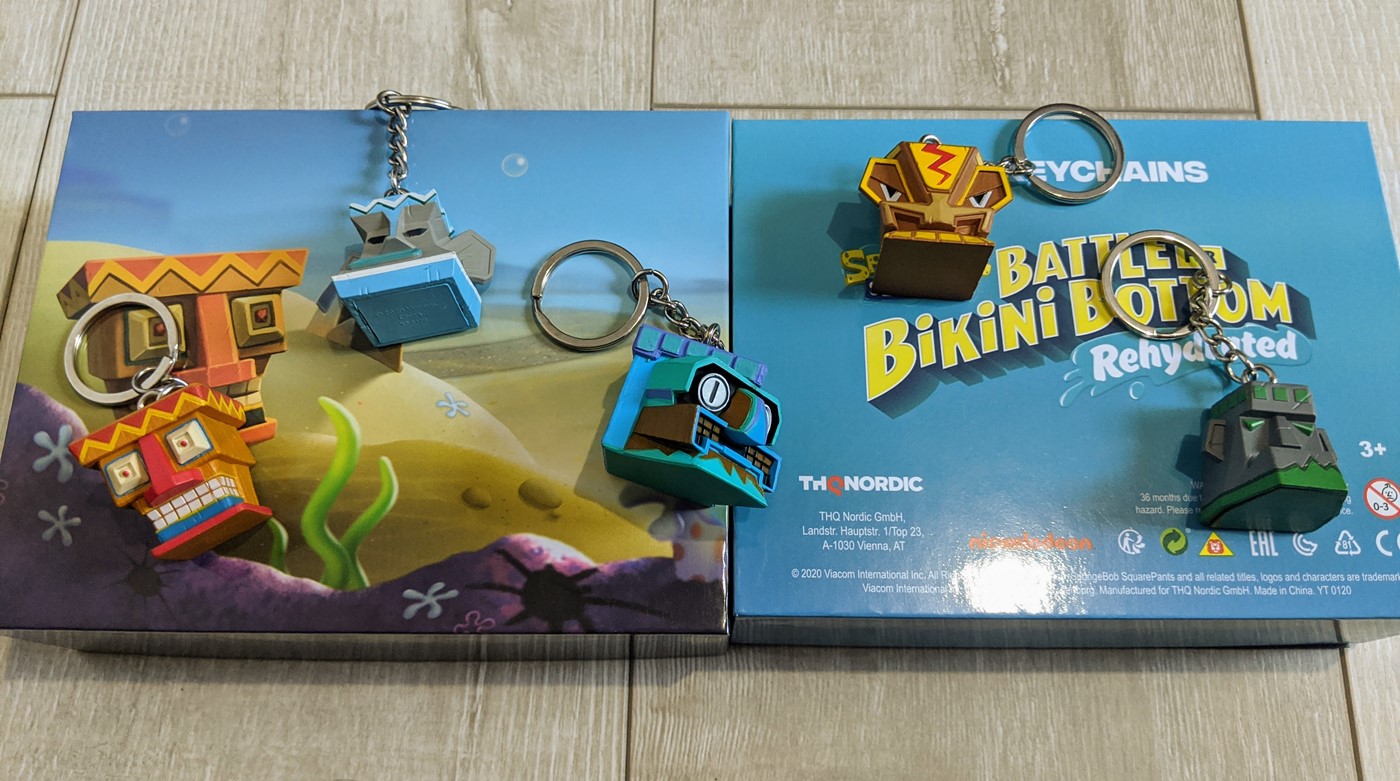 These are not the kind of figures that you find in typical collector’s editions in the $100 range. Often those figures feature goofy faces, erroneous paint jobs and overall don’t feel high quality. Instead of being proudly displayed, those poor quality statues get thrown into a closet never to be seen again. Fortunately, all three of the included figures in the F.U.N. Edition are of excellent quality. They clearly look like figures you could actually buy at retail as awesome collectibles. SpongeBob is depicted standing victoriously with his tongue extended true to his silly nature as Gary the Snail looks on. Sandy stands atop a clam ready to wrangle an enemy with her lasso. Finally, Patrick is shown hoisting an underwear-clad watermelon with broken watermelon pieces scattered on the ground. The dynamic nature of the figures makes them a joy to look at as well. The figures are around seven to eight inches tall. 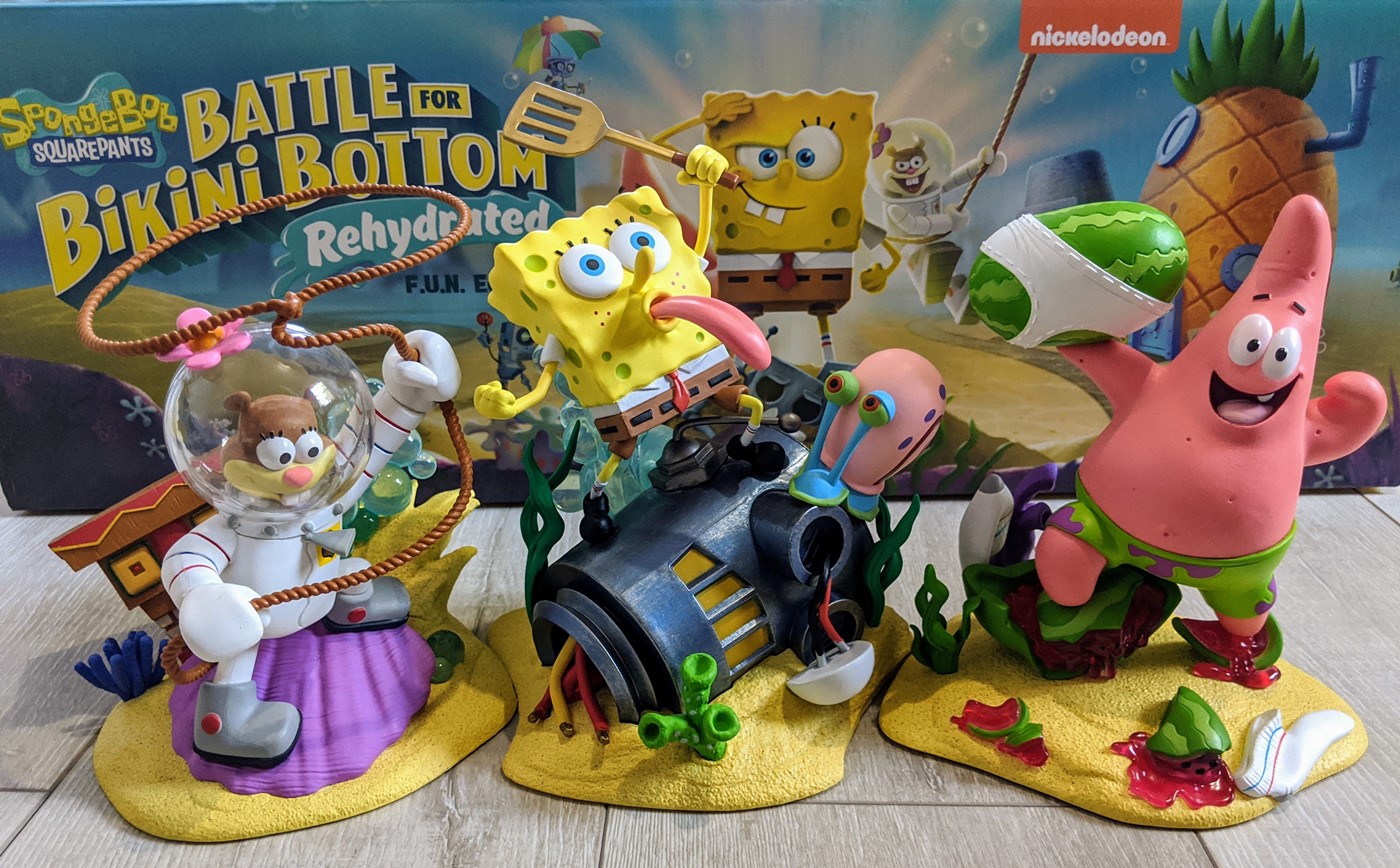 The beauty of the three figures simply cannot be understated. These are seriously high quality items that deserve a look. Fortunately, the Shiny Edition comes with the SpongeBob SquarePants figure specifically, which is by far the best collectible item in the set. Why are Sandy and Patrick the two other characters depicted as opposed to characters such as Squidward? That’s due to the fact that the game lets you play as SpongeBob, Sandy and Patrick specifically. Each figure is separately housed in their own retail-style package if you’d rather keep them boxed. With that said, they’re adorable and absolutely deserve being displayed.

This is also one of the largest collector’s editions you’ll likely find out there. The box everything comes in is 30″ x 10″ x 10″. In this case, it makes more sense to display its contents separately than within the extremely long, unwieldy box. Despite being of impressive quality, it’s clear that the SpongeBob SquarePants: Battle for Bikini Bottom Rehydrated F.U.N. Edition figures are for true SpongeBob SquarePants diehards specifically. It’s unlikely others would be willing to ante up the cost to pick this edition up. Those hungry to snap up either the Shiny Edition or F.U.N. Edition can still do so via retailers such as Amazon, Best Buy and GameStop while they’re still in stock.