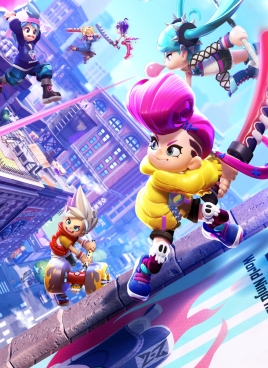 Originally set for a late May release after an earlier beta test, Ninjala is finally here. GungHo’s latest game blends a bit of Splatoon‘s visual style with bright colors, kid ninjas and even space ninjas. Unlike Nintendo’s widely-regarded shooter, this is more of a melee-focused affair with a battle royale motif. This free-to-play game offers up something totally different from other games on the platform thanks to its mix of team combat and small-scale battle royale for the multiplayer modes. The single player narrative also aims to mix in tutorials with a reasonably-compelling narrative and offers up something worthwhile for those looking to improve quickly when playing online.

Ninjala is in its early days and as a result is a bit lean on content at the moment. Fortunately, what’s here is largely nicely executed. Online, you have either eight-player battle royale or team-based action to content with. The battle royale mode is the first thing available and easily the most addictive mode in the game. It’s got a few interesting twists to it that make it a blend of a regular battle royale shooter alongside award-based mechanics that are reminiscent of Overwatch’s play of the game segment, only with a different execution. In Ninjala, you have drones to take out and they do different things in the various modes. In single player and online, they’ll buff up your point totals a bit — but online, it can mean the difference between a first place and second place finish.

Attacking the most drones gets you an award and racks up tons of points, so throughout a match, have you a constant risk/reward contest going on. If you focus on only attacking drones, you leave yourself open to attack and defeat — but will certainly at least gain points and level up quickly. Going after just rivals ensures that you’ll win some battles and lose some — but open the door to being piled on unless you’ve got a special activated and can take them all out in one fell swoop. Even for those ganging up, there’s a risk because you could go from a top spot down a couple of notches to someone who’s taken out a few drones and is able to pull off a power play like that and take out two or three rivals at one time like that. 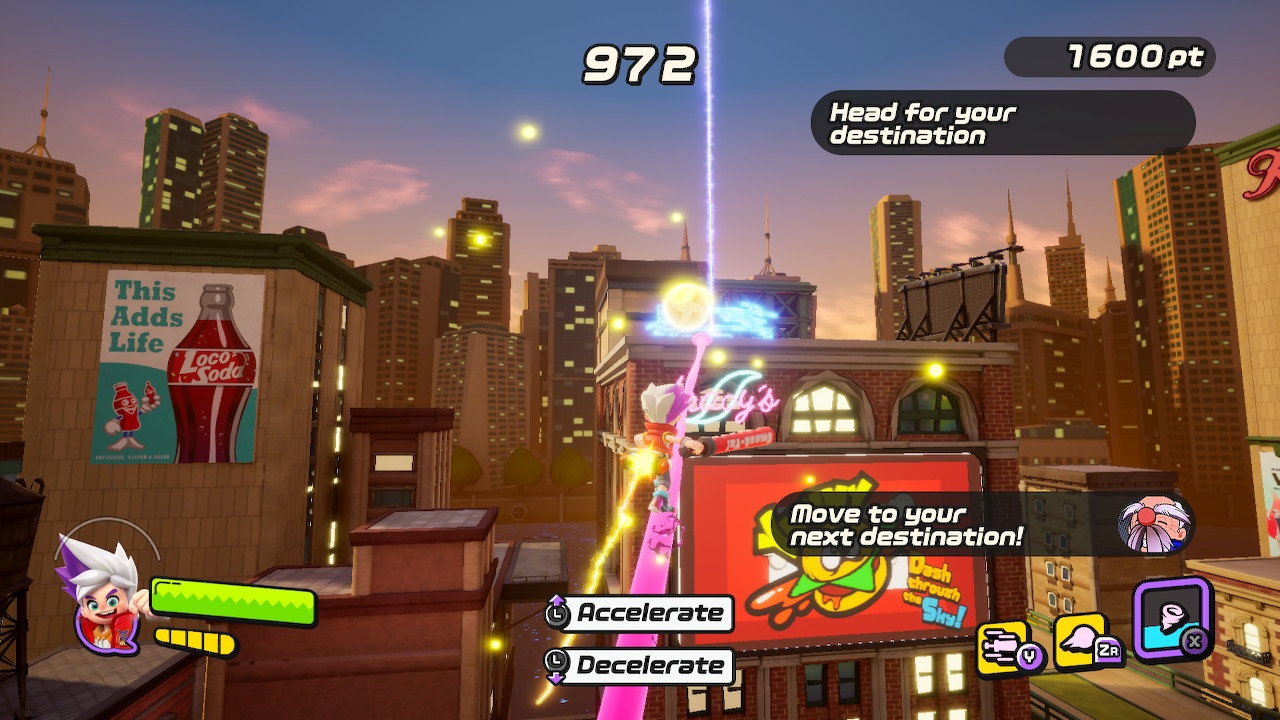 Ninjala‘s parkour-based combat flow helps it stand out from anything else on the platform. You can wallrun or even grind gum rails, which in a brightly-lit world like the one featured here evokes Jet Set Radio. Ninjala’s freerunning also recalls the freedom felt in Sucker Punch’s Infamous games where you can pretty much go anywhere you want in a given area and combat is vertical and can happen anywhere. The map variety is impressive and allows things like fast-paced wars on the tops of buildings or highware antics on a grindrail. The latter is especially exciting since no one has anywhere to go — so it’s up to your own skills to survive.

When you’re on the defensive, you have a few options. You can try and escape and if you’re lucky, have a special built up to either deal out a lot of damage or maybe take them all out. Failing that, you can eat a shot and then a stick-movement minigame will pop up regarding your positioning. Getting yourself in the proper position via this minigame can save your bacon and allow you to take out a foe low on health or double-team a rival with someone else. Just getting knocked out is bad enough, but fancier knockouts using your gum-assisted special result in an IPPON which sends you into the wall dumbstruck and gobsmacked until you respawn.

The verticality of the stage layout as a whole makes you play differently because no matter what map you’re on, you have a perimeter area with which to either attack drones or stalk folks. The main stage area is usually on top of a building — or it could be near a set of interconnected buildings and that’s where you see the most chaos unfold. While nothing tops tightrope battles, there’s a particular joy about seeing a brawl break out atop a skyscraper and then knowing you can cherry-pick someone or hopefully having the timing work out to special attack everyone out of the map for the time being. If this works out at the end of a stage, you can wind up with a quick out of nowhere win or a close second place finish. Hiding using the ability to transform into an everyday object can also help you run down the clock — and serves as an effective means of short-term stealth when the time is right. 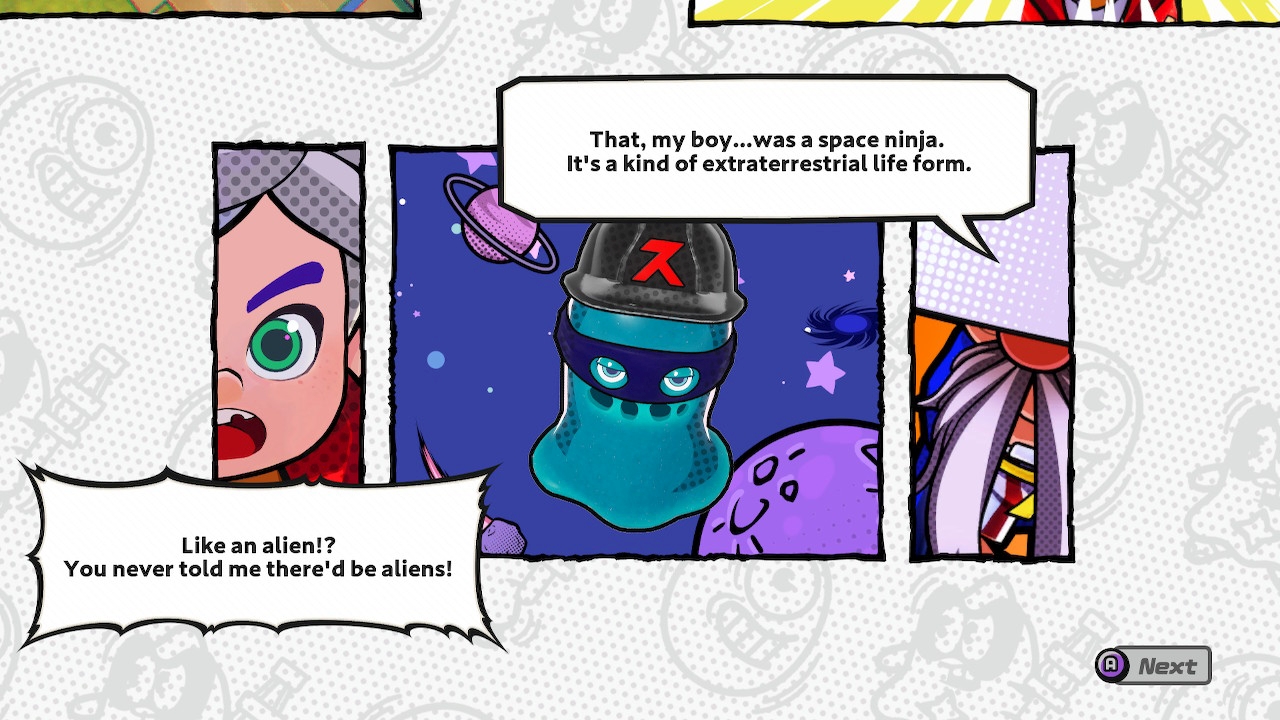 The free-to-play aspect of the game is rewarding and offers up a lot of fun. There is also a single-player campaign that you can buy that elaborates on the lore behind things. As the young Van, you’re out to become a ninja for your father’s honor and to help save the world from space ninjas. In a pleasant surprise, it actually has decent voice acting. The tie-in anime web series helped out there because they already had a cast and they have good chemistry together even if the plot is a bit threadbare. The single-player campaign acts as a fantastic way to learn the timing of attacks and the mechanics themselves while dealing with things like preventing areas from taking too much damage. The biggest issue with this mode is that there isn’t much variety to the missions and you wind up doing the same things over and over, just in a slightly different setting.

One of Ninjala‘s most impressive feats is that no matter how intense the action gets, the framerate never plummets. There are occasional drops here and there, but you’re always able to time things out closely to how you envision them working out in your head. The world itself is full of life with things like cafes and theaters adding a sense of realism to the surreal setting, and there are nice lighting effects on things like video walls as you run up them while getting from Point A to B. Ninjala does suffer when it comes to visual changes between character models. 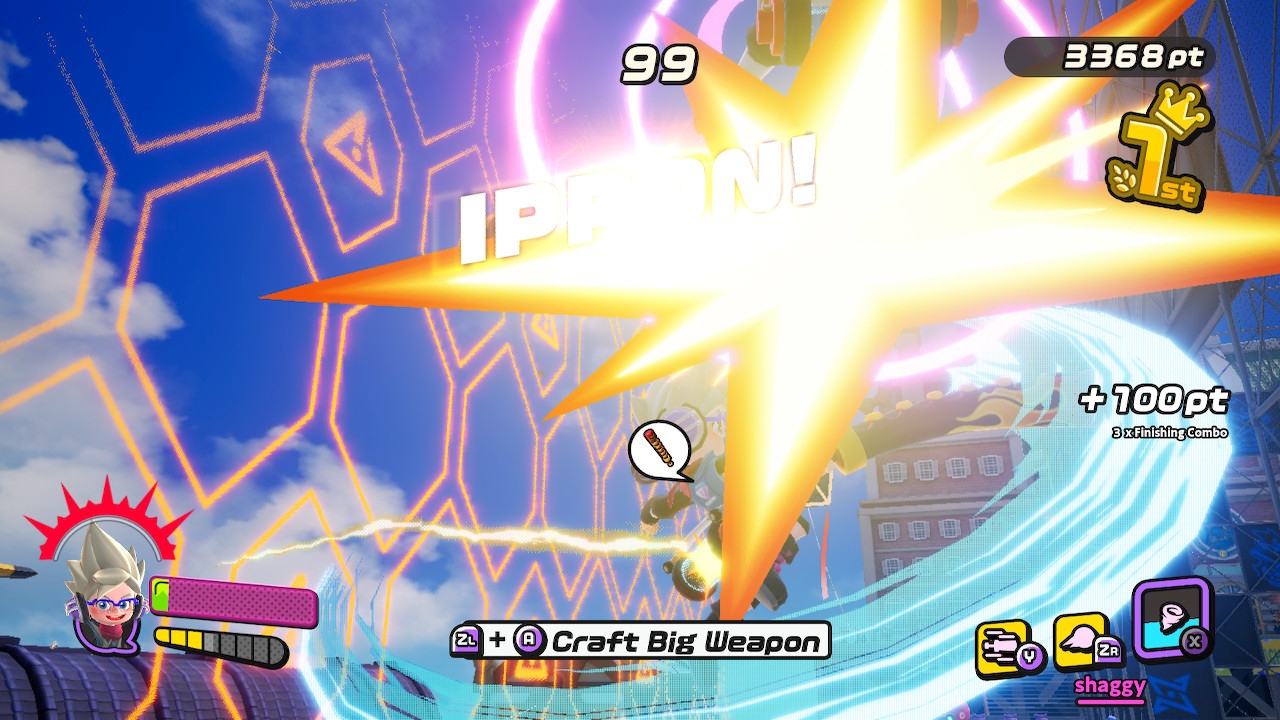 There are a fair amount of accessory options, but little you can do for full outfit changes. Hopefully that’s something that’s worked on as time goes on because it make things feel too uniform when you see a roster of characters. Ninjala does make use of Japanese lore for some of its items to make the ninja theming fit. The drones are shaped like Darma dolls, while the bounce pads used to help you get around the world are shaped like tsuzumi drums.

Ninjala‘s audio design is strong. Beyond the good voice work, the soundtrack is also satisfying. It’s full of taiko drum sounds mixed in with flute music and fits the ninja theme while still delivering tunes that are fun to listen to. The sound effect work is also good — encasing foes in ninja gum to trap them for a bit is satisfying as you can get an audio tell when to be more careful when you hear it pop around them and then know to move in for the kill more intensely. There’s a great thwomping sound effect for your weapon as well — and it does change a bit depending on the kind of weapon skin you go with, which is a nice touch. 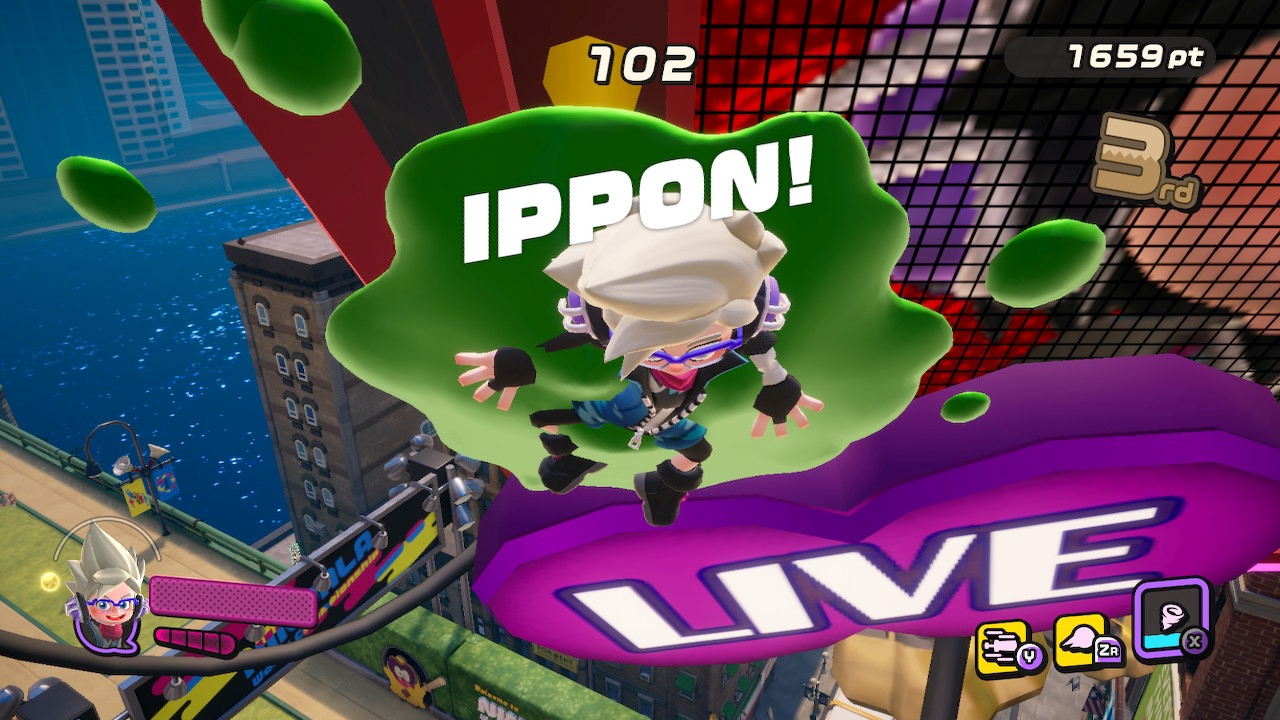 Ninjala is a well-crafted game and another fine example of free-to-play done right. You can make steady progress in the online game without spending real-world money and the only part of the game behind a paywall is the single player campaign — which is currently in its first phase. GungHo has done a great job early on at making a fun experience for players of all skill levels and still providing enough depth to sink your teeth into things when you want to. Ninjala isn’t just a great free-to-play game, it’s a great game period and one well-worth checking out on Switch.