Bizarre Creations was one of the most-revered racing game developers in the early ’00s, having proven their skills with Metropolis Street Racer on the Dreamcast and cementing their status as top tier with the Project Gotham Racing games on the Xbox family of consoles. The first was one of the finest launch titles on the original Xbox, while the sequel remains one of the most robust racing game offerings ever — and gave life to the Geometry Wars series. The third was a bit underwhelming as it had a rushed development cycle to hit the 360’s launch, but was still good, and the fourth was in some ways the magnum opus for the series in terms of the variety of content offered up and its dynamic weather system that has yet to be topped.

Blur was the company’s final racing game and one that wound up getting lost in the shuffle in a crowded field. Coming out at around the same time as Split/Second, the game delivered something that was unlike anything before or since — but never caught fire. The advertising built it up as Mario Kart-style weapon combat, but with real-world cars in a way that aimed to bury Mario Kart and the then-current ModNation Racers and that seemed to hurt the game because by building itself up, it tore others down. It’s a shame too because in terms of mode variety, Blur really does strike a nice balance being a power-up-based racing game. You have a variety of options available, from straight races to checkpoint-based affairs to eliminator-style races to destruction-filled affairs. 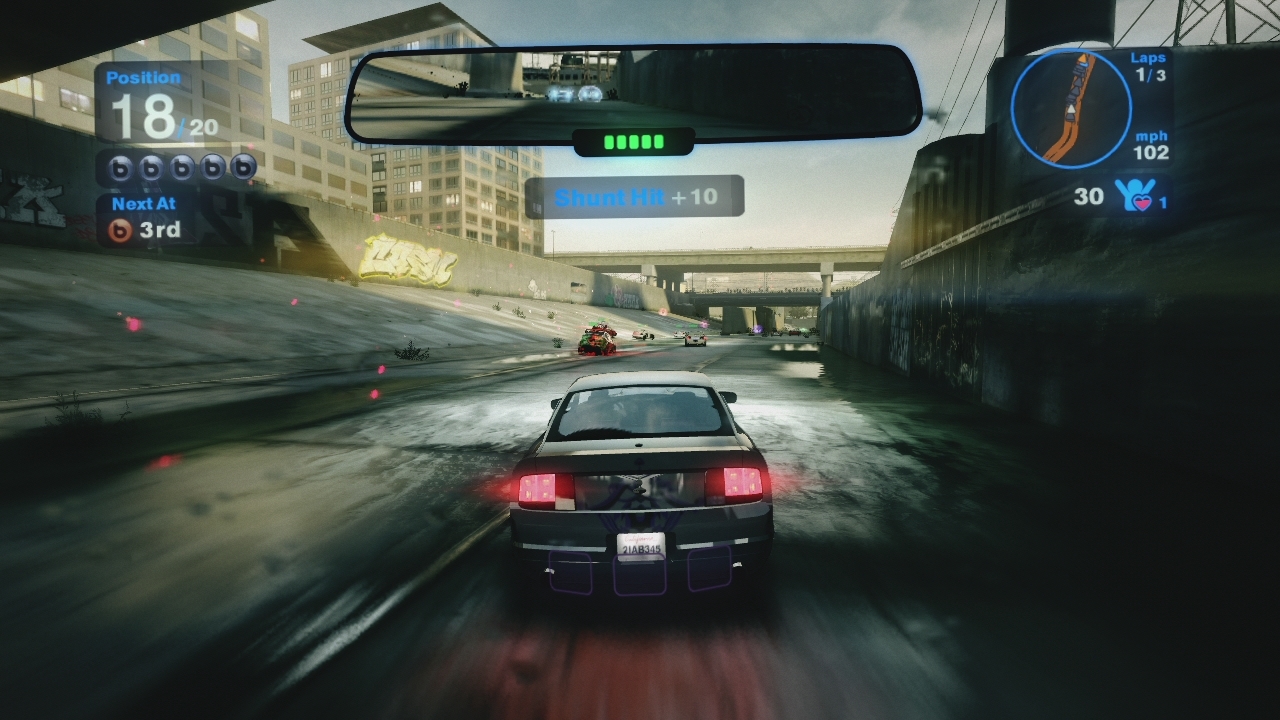 There’s a heavy integration of social media and social media culture, which was contemporary for a decade ago and has allowed this to still feel like a modern game in many ways. Fans act as not only a way to gauge followers in a different way, but also act as XP. The more fans you get for flashy racing or pulling off advanced tricks, the faster you’ll level up. Races feature regular objectives like getting in a top three pole position, but you’ll also have fan objective goals to complete that can add new fans to your total in large numbers within a few seconds.

You may have to reach a certain speed with the aid of a turbo boost, or hit two attacks backwards, or even race through a slew of gates while enemies not only surround you, but nail with their own weapons. These were the most fun fan challenges to do because they immediately evoked the cone challenges from PGR, but with a lot more excitement and challenge to them. These challenges are essential for stage progression too, as your road to success is paved with objectives for a lest of stages based on that level’s boss driver. Some will mandate more action and want things like a blast sending someone into water, while others want you to show off how many fans you can get in a single race by completing every fan challenge. 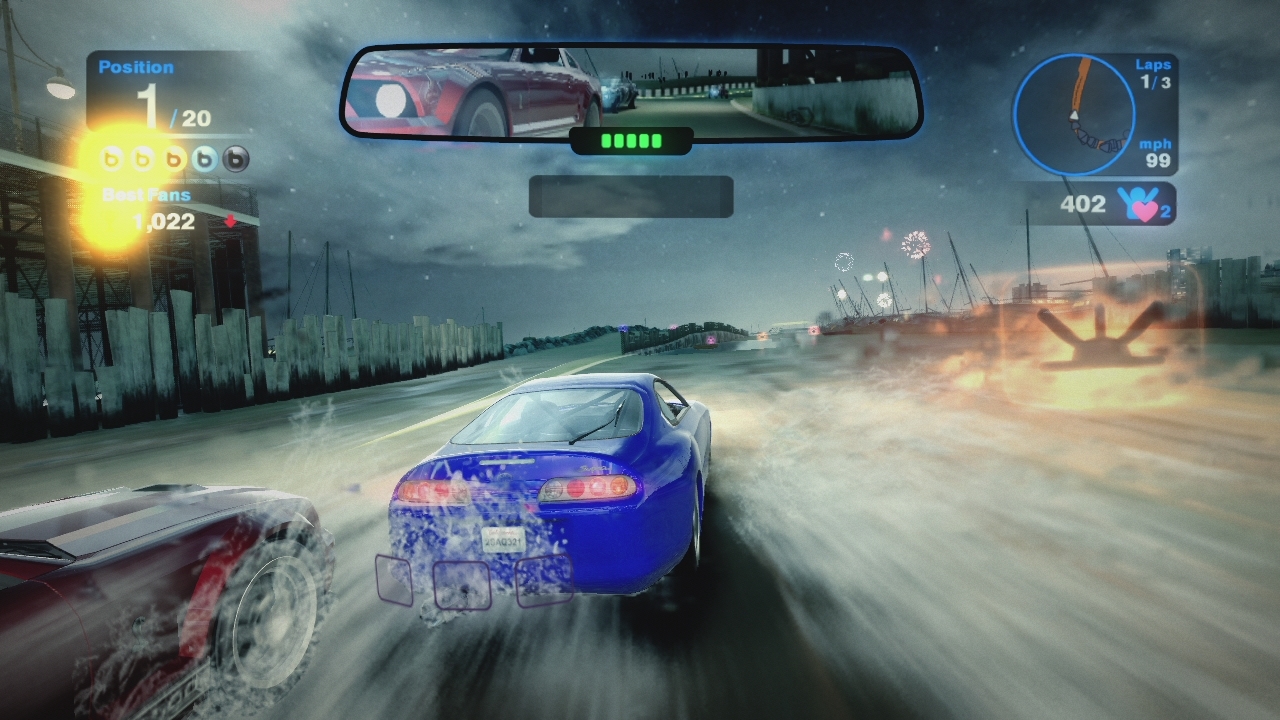 The action-oriented objectives reminded me a lot of Burnout Takedown’s signature takedowns where you would get rewarded for crazy hits, only now they’re baked into the progression model to some degree. The great thing that if you don’t excel at those, you’re okay — you can still just progress normally by building up your fanbase. You’ll have to do a better job, however, and get first place in every event to keep progressing without toppling bosses. Doing so allows you to not only test yourself against the best drivers, but win their cars too. Just boosting your fan levels will allow you to nab some cars, but you won’t know exactly what you’re getting outside of the boss battles.

Bizarre’s time with the PGR series was put to good use here because even though it’s very much an arcade-style game, the cars featured are all licensed and do control differently from one another. You have a diverse lineup of vehicles from things like Toyota Supras mixed in with Ford pickups and even high-end luxury cars from BMW. It’s a bit odd seeing these real-world vehicles in this setting, but thanks to things like Mario Kart 8’s Mercedes-Benz DLC years later, it doesn’t seem as weird with modern eyes as it did when the game was new. The power-up selection is diverse and manages to work nicely within the framework of these being real-world cars racing in real-world inspired locations. 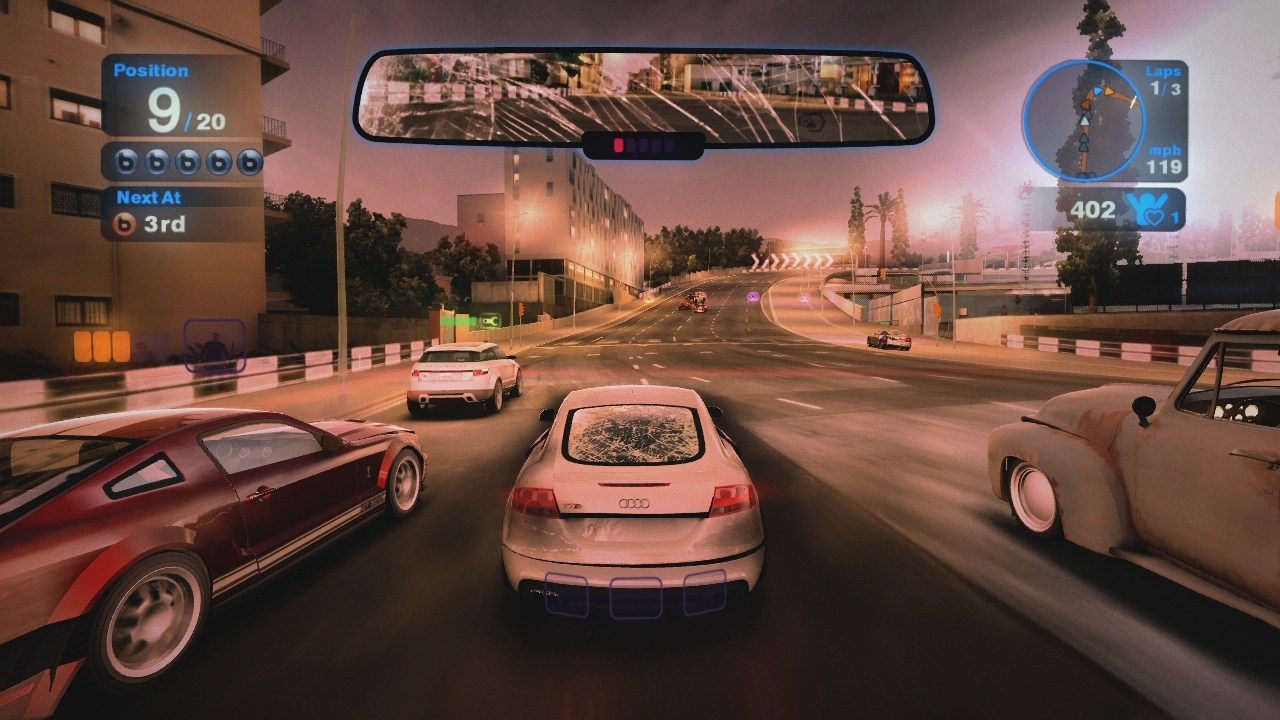 The driving mechanics are spot-on and every race type features great driving as long as you pick a vehicle that matches your style. The game has a tremendous menu system that streamlines things — so it will tell you right away if a car is grippy, drifty, or balanced. You can even retry and instead of reloading the whole car menu and having to restart the whole thing, you get a quick car menu akin to dying in an arcade brawler and it bringing up art of the character you can choose from to get the core info across and get you back in the game quickly. Blur has a tremendous flow to it and you can go from a standard race to a destruction-based race quickly and the reward for doing well in each race allows you to make progress faster.

Blur may be a decade old, but it still looks sharp. Bizarre was smart to emphasize things that looked great — so a ton of detail went into the cars, the environments and especially the lighting effects for weapons. The car models are on par with what you’d see on the Switch now on a high end and the pacing never once stutters. No matter how many weapons are active on-screen at once, whether it’s a quick black or a giant black hole-ish explosion filling the screen, you wind up with a smooth-playing experience. Even areas like driving through massive waterways work out nicely thanks to water physics pushing the hardware, but still allowing for a smooth experience. 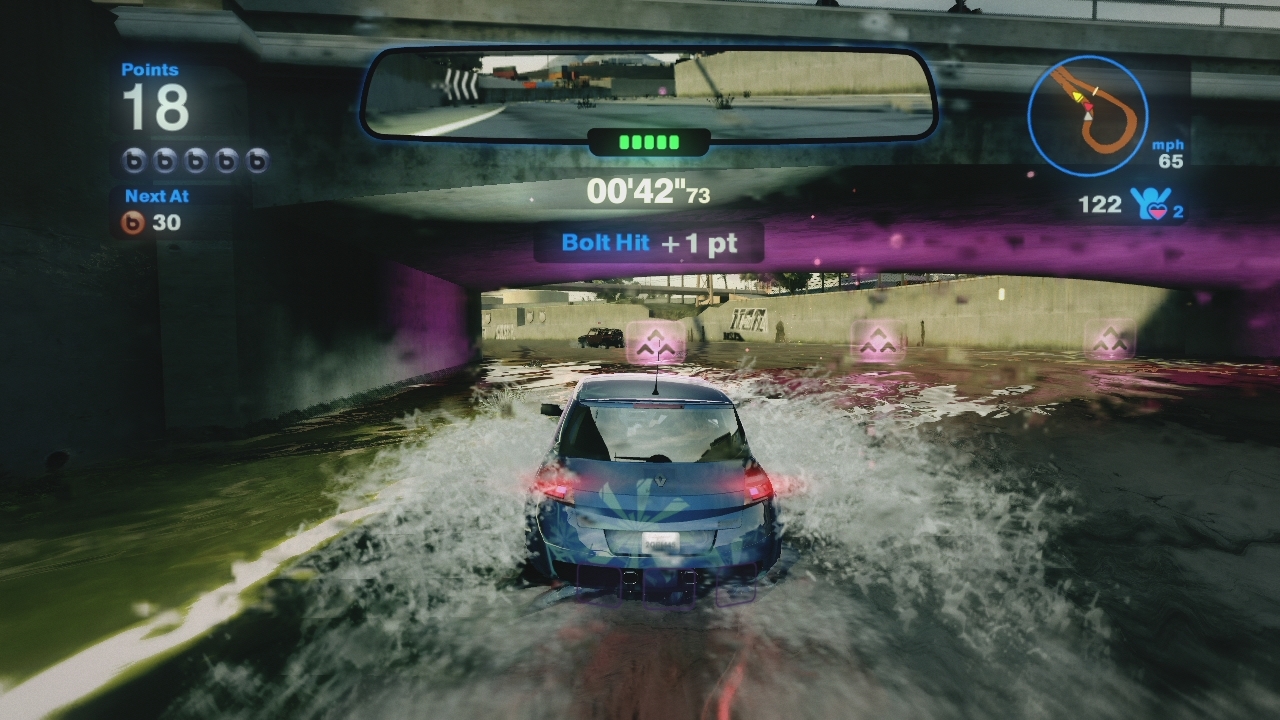 Blur’s sound design is unique for a racing game because it’s focused more on sound effects and environmental sounds than its soundtrack. There’s nice menu music that fits the neon-soaked menus with a club-esque vibe, but the star of the show is the sound effect work. Each vehicle sounds different and when you’ve got swarms of enemies around you, you’ll hear their engines roar — but most importantly, you’ll hear where their attacks are coming from. Even with just speakers, you can tell which direction they’re coming from thanks to channel separation being done well and each attack type sounding different. Your arrow-like attacks offer up a small chirp compared to the massive explosions that rattle your screen and flip your car. Landing attacks feels rewarding, while eating a few big shots in a row makes you feel like you’ve got work to do to catch up and keeps you on your toes for the rest of the race.

Blur is a must-have for anyone who wants something a bit different from what’s on the market now. Its social media-style progression system was way ahead of its time and feels far more contemporary than things like Forza Horizon going for a more traditional XP system when this does the same thing, but has a more modern presentation. It controls like a dream, looks great and has some of the best sound design you’ll hear in a racing game. Unfortunately, you can’t get the game digitally anymore, but you can get it on the 360 or PS3 for about $20. The former version controls a bit better thanks to the 360’s superior controller and you can use that controller with ease if you can find a PC DVD version on the cheap out in the wild.