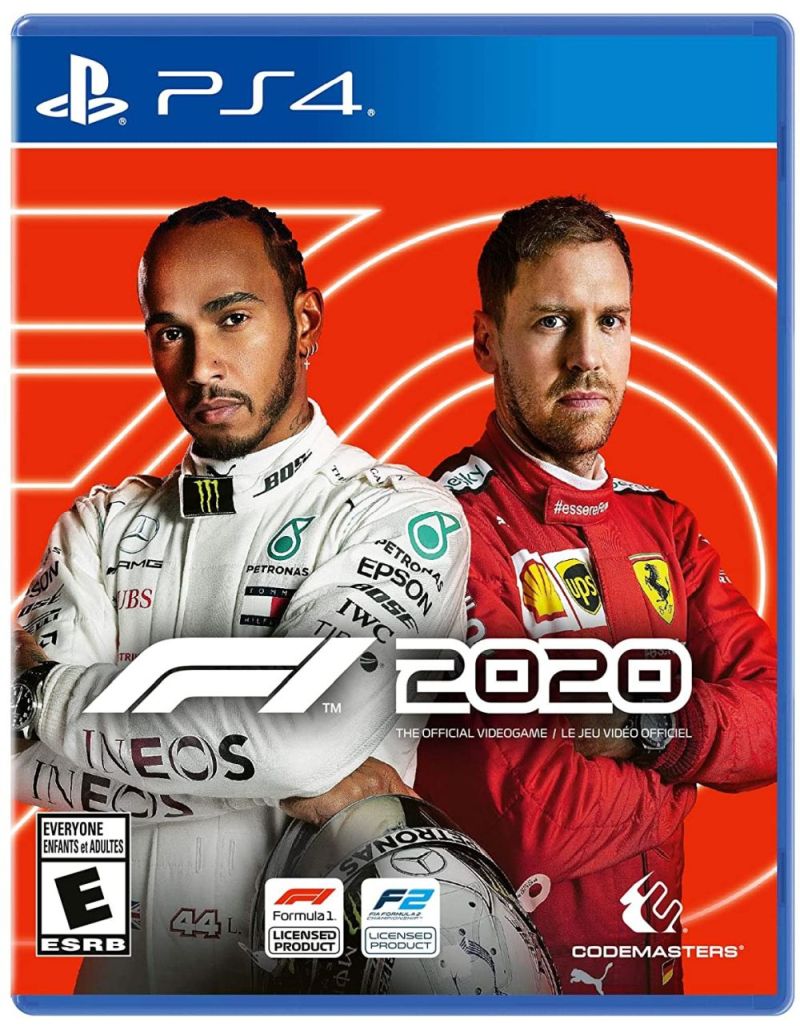 Codemasters has continued to innovate its F1 series of games on a yearly basis by including new aspects while keeping up with the direction of the motorsport. For the first time, its yearly game will be launching alongside the start of the Formula 1 calendar. F1 2020 continues the charge towards innovation with improvements to accessibility, a major new game mode and a spotlight on Formula 1’s biggest historical star. All of this while continuing to improve the racing dynamics and properly replicating the sport once again. F1 2020 is a fine addition to closing out the current generation of gaming.

Codemasters has dabbled in the past with classic cars and bringing some history to its F1 games. Last year, we saw the inclusion of Ayrton Senna and Alain Prost to the franchise as the game was complete with the two’s player models, cars and liveries. This year, the focus has changed to a more modern driver that’s more well-known around the world. Players have the option to purchase the Deluxe Michael Schumacher Edition of F1 2020. Schumacher is arguably the most dominant driver of all time in Formula One, and his famous cars and teams are included with this to back that up. This adds a whole new dimension to F1 2020 as players will get to drive his 1991 Jordan, 1994-95 Benetton and finally the 2000 Ferrari. Players can also expect an updated F2004 from Ferrari in the game. Along with multiplayer car liveries, helmets and race suits, it adds more to the game.

F1 2020 does retain most of the previous classic cars and these are included in the standard edition. 16 cars that range from 1988-2010 are included, with most being in the 2000s. One thing that is noticeably absent is Schumacher, himself. Senna and Prost were actually in the last game, but Schumacher is nowhere to be seen. In terms of classic tracks, nothing has been added. On top of this, you will continue to race random people rather than actual classic drivers when running in Classic Mode. It still feels like a lot can be done with this mode. As for the new classics themselves, the Jordan and Benetton’s are difficult to drive in comparison to what else is in the game. These may be the most difficult cars to get traction with, but they look and especially sound the part. Schumacher’s Ferrari’s are able to get the power down better and provide better grip, but these cars are a great way to challenge yourself. 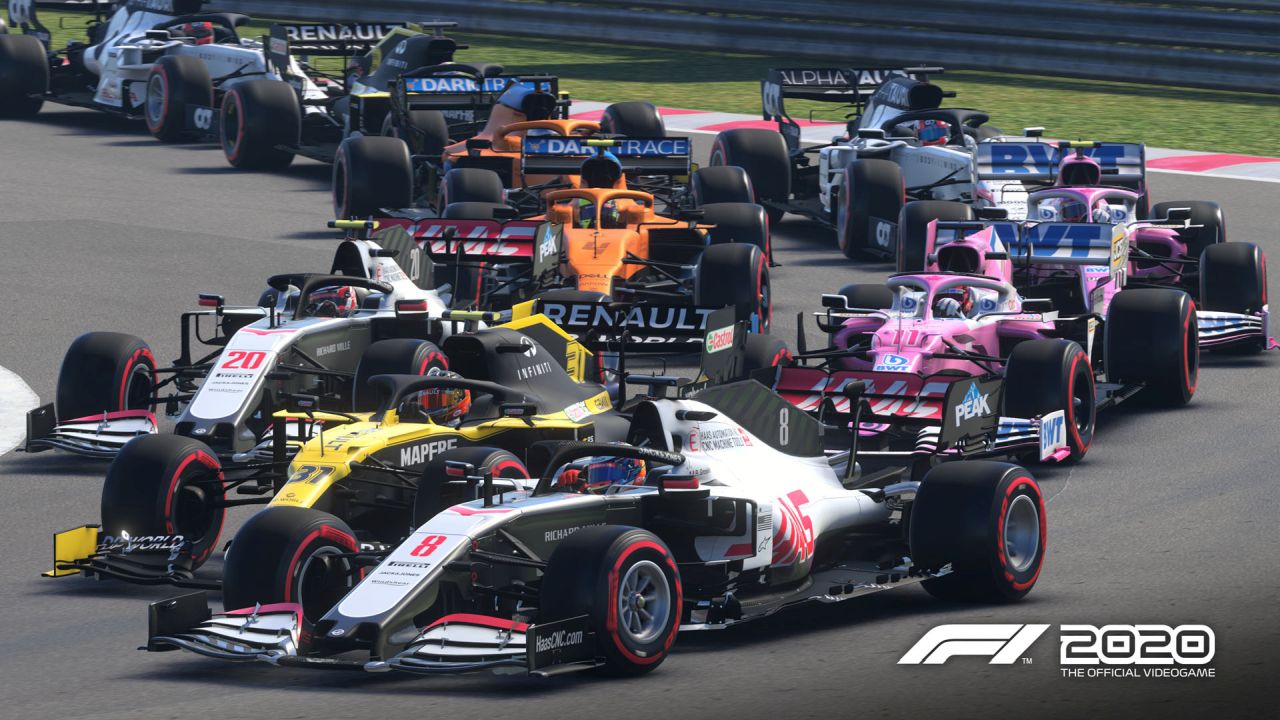 For the longest time, this series has relied on basic championship modes and eventually brought in a career mode. Whether it be including Winter Testing or something of the sorts, the initial buzz quickly wore off. Codemasters brought in its deepest mode to date with My Team for F1 2020. My Team is the revolution that the F1 series has been looking for. Not only does the game reference history with My Team, but it embraces it as you will be a team owner and a driver.

The initial startup has you creating your driver, choosing a sponsor, engine supplier and hiring a teammate. The focus is not only on managing your budget, but also turning a profit and being successful. You can allocate funds to build facilities, improve certain attributes such as your social media presence and conduct interviews that actually affect not only your personal acclaim, but also what your engineers think about you. The interviews have a direct response on allocating your research and development point and also making you attractive to new sponsors and potential teammates.

The buzz doesn’t wear off with My Team. The mode includes weekly management as well as an off-season. Managing off-track activities is important. These can range from simple marketing campaigns to raise money and team awareness to further pushing different aspects of the car. Since your team starts at the bottom, you won’t be keeping up with the top teams. Your driver will eventually be granted a rival and you will be interviewed weekly about your team and your race results. Will Buxton joins the game for doing press interviews and your initial interview with him will help dictate the direction of your team. You will create your livery for your car and this livery carries over to multiple modes. My Team is the right mode to keep you coming back for an excellent single player experience. 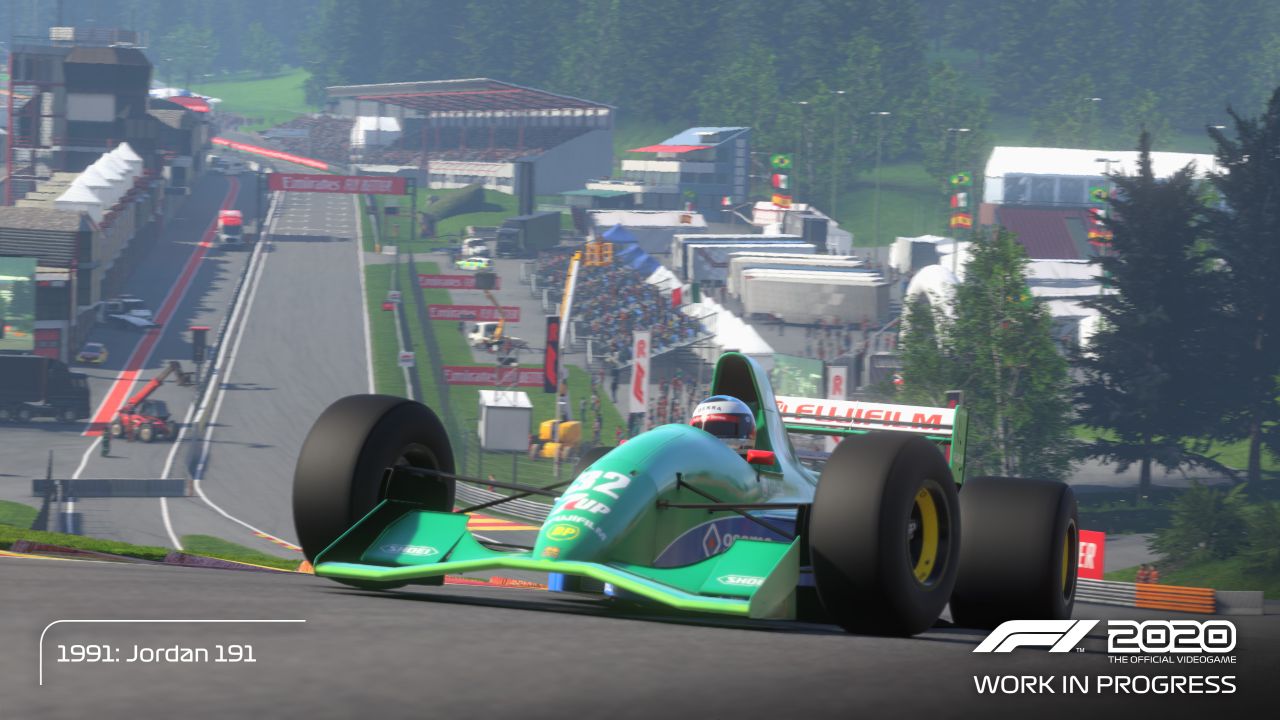 The Career Mode does return and players can start out in Formula 2 with a few different options. F1 2020 allows players to have shortened seasons and pick their tracks, whether it be in Career, My Team or Championships. The current F2 roster is from last year, but Codemasters will be implementing the 2020 roster and liveries down the road. In F2, players can range from a full season to a shortened three-race qualifier. Players can also jump straight to Formula 1 if they choose so. Outside of these three modes, players can also do time trials or partake in the Challenge Mode. These challenges will also pop up in My Team to earn some more acclaim. These are limited, though. Codemasters has stated that if you decide to purchase what it’s calling the Podium Pass, there will be more challenges available to unlock more livery options. This is something that I do not feel needs to be extra especially if you paid for the Deluxe Michael Schumacher Edition. My Team is enough to keep people engaged in the game.

As for what happens on the track, a slew of changes have been made to allow a more accessible game for F1 2020. A new Casual Mode has been included that will allow menus to be simplified and off-track surfaces easier to drive over. Steering and racing assists are available so newcomers can enjoy the experience and build up their confidence. For the veterans, Codemasters has obviously worked alongside a few F1 drivers for its e-sports series. The developers have stated that they worked with McLaren driver Lando Norris to get a better idea of the handling. ERS will now be controlled with the simple push of a button and this is a much-needed change in the racing department. This is known as the Overtake Button and allows for easy access to get some more horsepower while racing. This does run out over time, so much like the rest of the racing, this is another aspect you will be managing.

Much like the pilot of an aircraft, you will be doing more than just racing in F1 2020. On top of managing your Overtake ability and knowing when and where to deploy DRS for more speed, tyre management is the main focus. Players will need to not only monitor tyre temperature but also brake temperature to make sure they are getting the most out of the car. Fuel management plays another pivotal role. Your Chief Engineer will again radio to you when an optimum time is to access these enhancements. There’s a ton to do when racing. Norris had also stated that the traction and wheel spin need to be adjusted to be more realistic. I feel the handling, overall, is more responsive. Even on the highest difficulty for assists, the car is manageable. 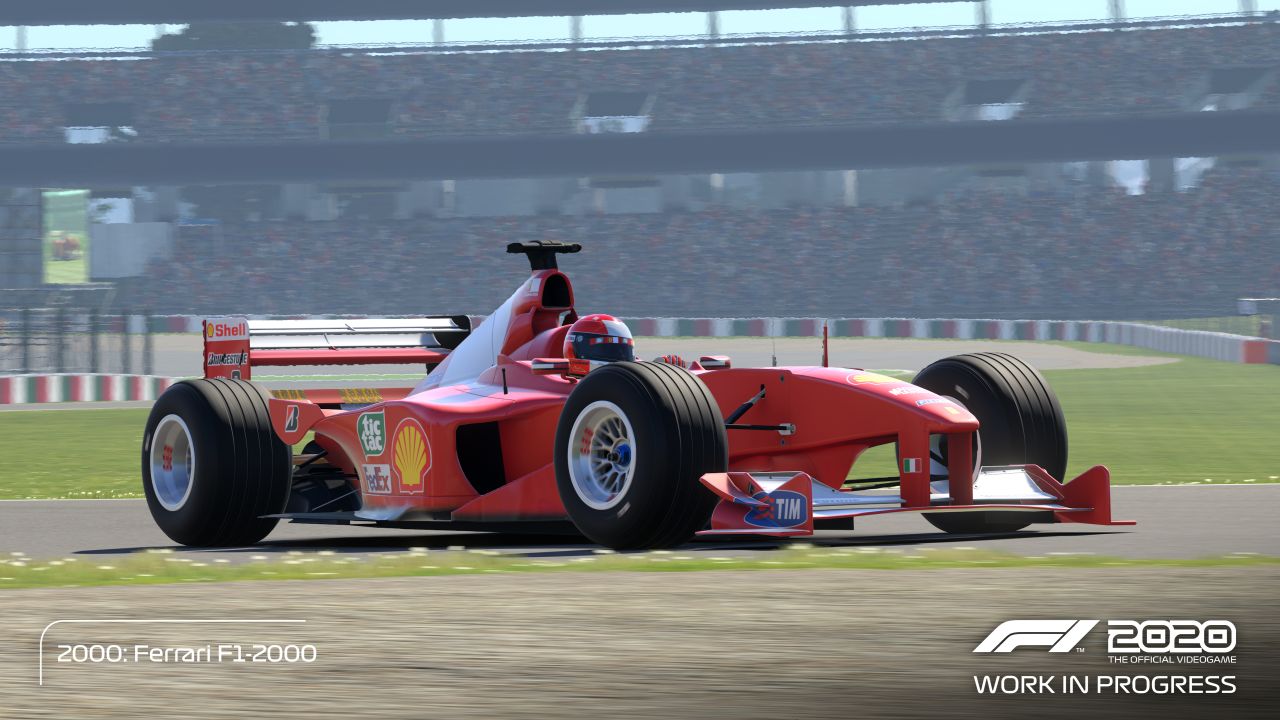 It is easy to get overly confident with racing in F1 2020. Another form of management in F1 2020, however, is managing the throttle and traction. These games demand a ton of patience but these cars will tease you into thinking you can go all out. It is about finding that limit or finding the wall. Traction with no or little assists on doesn’t feel that different, but the kerbs feel more punishable than before. The AI continues to be questionable as the pacing still seems to be off, especially on street circuit. I will see them come extremely close to colliding with me and then there will be other issues in the corners with the AI not maintaining its line. You can argue the AI not being able to see you in some circumstances, but there will also be times where if you’re spinning out, it will hit collide with you. It’s extremely inconsistent.

The focus on eSports remains intact with F1 2020 as the weekly qualifying events return. Unfortunately, no changes have been made outside of some customization options to online racing. Unranked and ranked races are still here with Leagues, but that’s it. The servers seemed fine during pre-release testing with no lag or disconnections being an issue. Something in the future with an online version of My Team would be spectacular, but something needs to be innovated here. Splitscreen racing has returned for an offline experience if you have a buddy over. 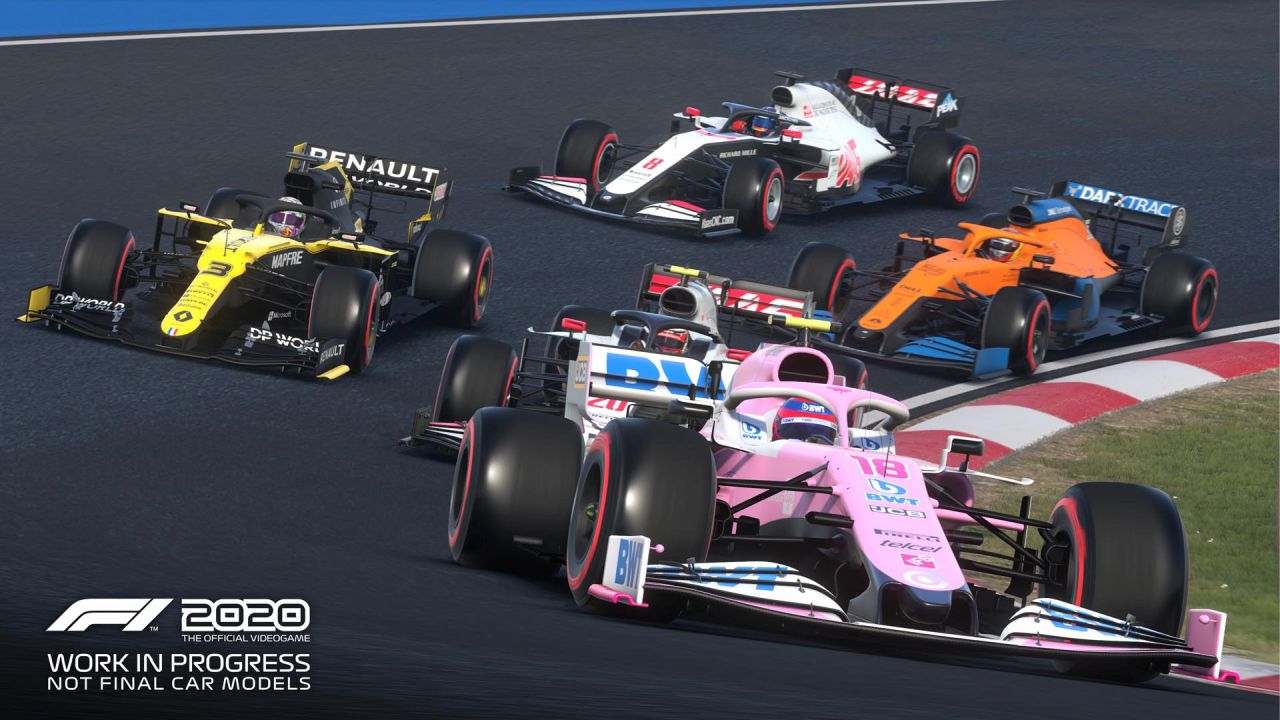 Playing F1 2020 on a PlayStation 4 Pro is pushing the limits in the visual department. The cars look just as good as they always have and the player models are about as detailed as they’re going to get with the series on this hardware. Some of the cutscenes drag the frame rate down and screen tearing is abundant. Thankfully, this isn’t really noticed while racing. The racing portion runs smooth and the tracks remain detailed. Codemasters has added a much-requested rearview mirror option and surprisingly, the image in the mirror is detailed and doesn’t affect the performance. The lighting continues to be an excellent portion of the racing as it helps bring the game to life.

Codemasters continues to nail the sound department for 2020. While the current state of F1 cars aren’t the best sounding things in the world, the team still has the proper sound effects and reactions properly implemented for the cars. Voice acting is still solid and the game retains the ability to talk directly to your Chief Engineer. This is something that no other racing game has accomplished. The classic cars continue to be the stand out as they represent the opera of what Formula 1 once was. I did have a few audio bugs pop up and when passing a crowd, the mixing of the crowd reaction seemed a bit off.

F1 2020 is as good as it gets on the current generation of consoles. Codemasters has perfected its craft to make F1 2020 the pinnacle of the series. My Team is fantastic and will keep people interested in a single player experience engaged. Featuring Michael Schumacher was the right decision for the adding the classic cars, but having him as an actual presence in the game would be better. The casual difficulty should help attract some new players, while the overall racing gets a boost thanks to refinements and the new Overtake Button. The online multiplayer needs a new innovation as the current state still leaves a lot to be desired.