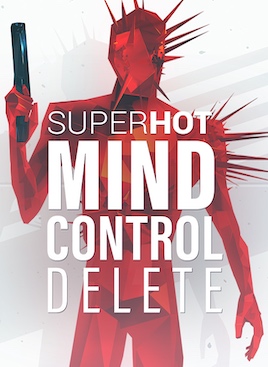 For those who haven’t invested in VR (or simply aren’t interested), the existence of an extra add-on release to 2016’s brilliant SUPERHOT may seem a bit perplexing. Taking out the assumption that a new team might have moved onto other projects and similarly interesting ideas by this point after a foray into VR — even if said team is named after the very debut they found fame with — is MIND CONTROL DELETE warranted nearly four years on? While the expansion has been in Early Access for some time, it’s only now that it’s been made available as a complete package. Completely free to the approximate two million having already purchased the base game prior.

A generous offer given the amount of content on offer in MIND CONTROL DELETE; discounting its secrets to uncover, there’s a probable 8-10 hours worth to invest in. A significant step up from the base game’s relatively short run-time, despite its excellently on-point pitch prior. Yet even with an increased length and suggestions on unraveling the narrative further, do SUPERHOT Team expand on the slowed-down, first-person puzzle-shooting as far as gameplay goes? At least in any meaningful ways that aren’t simply a retread? The good news, to kick things off here, is that yes: MIND CONTROL DELETE does offer interesting-enough twists and deviations on the excellent formula for players to feel a second visit is warranted. But that’s not to say fans will find themselves in drastically different set-ups as far as environments and apparatus are concerned. For better or worse, MIND CONTROL DELETE is perfectly comfortable in confiding the exact same aesthetic and style of presentation.

The game is still a minimalist attire of low-poly objects and many a red humanoid to take down. Bullets still streak past in visible red streams as on-screen prompts flash into view — serving as both notifiers to an empty weapon or the narrative’s resuming of some antagonistic dissuader upon another delving into the fleeting return to storytelling. On the surface not much has changed; if you were the more cynical time, you could argue that if anything the expansion doesn’t exactly build on or flesh out the original’s more subversive properties. Granted, SUPERHOT was never one to match the allure of a game like Undertale or Pony Island so far as excellently deconstructing its own existence as a game was concerned. Yet if you were expecting MIND CONTROL DELETE to rectify the original’s narrative/thematic promise, you may be left disappointed by how little is spent in attempting to mess with player’s perceptions. There are some interesting ideas — such as the way environments will on occasion distort, only properly rendering when in extremely close proximity — but their random nature upon level boot-up feels less like meaningful exposure and more just a pleasant visual effect. 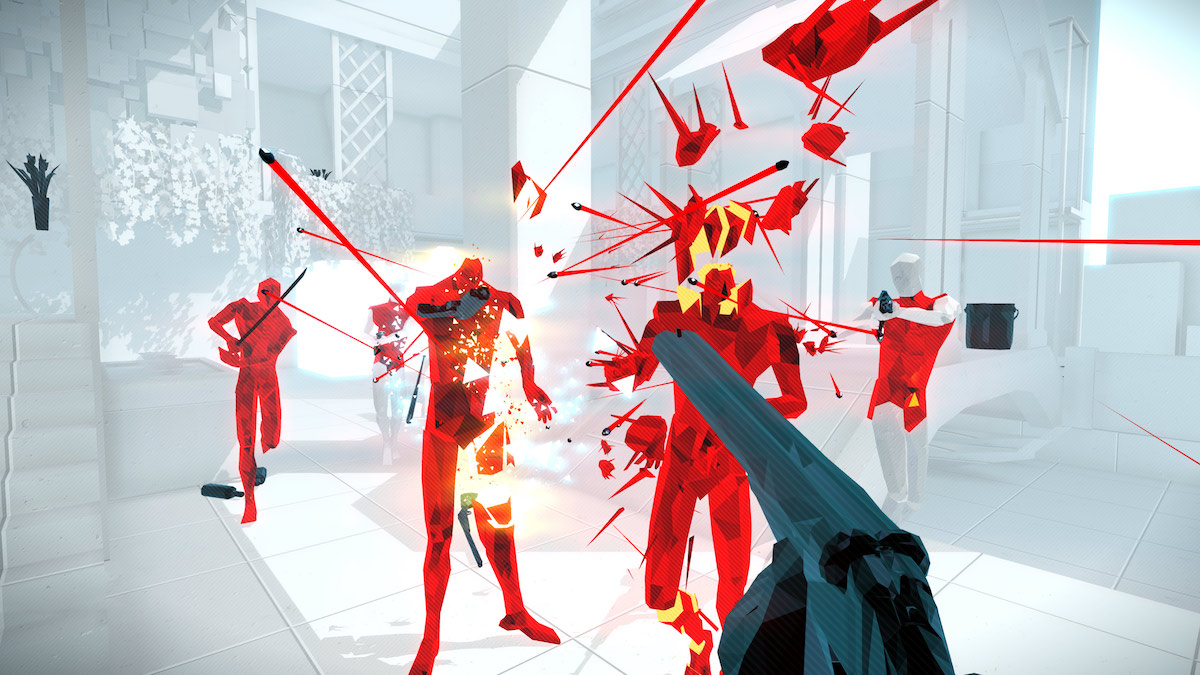 Even so, these are only ever small gripes to raise — criticism that proves to be not all that damaging in the long-run given the returning familiarity of the gameplay. A gameplay loop that still requires you to make small, minute moves. Making the most of the fact time only moves when you do, so as to take out a set number of targets, in order to progress. In this case, getting hit doesn’t automatically mean failure as you’re given two hearts by default to complete a level, yet even with this minor addition of assistance, it’s still wise to measure up the situation and make the most with what you’re given. Especially in the latter parts of the campaign, wherein the number of levels you have to beat as part of a sequence increases. Fail and you’re required to start the whole sequence again with a new, randomly-assigned set of environments. And considering each level starts you at any number of spots in an environment, the items you have at arm’s length to begin with can also vary. At one point, you may be fortunately lucky to have a nearby shotgun or rifle, in others you may be restricted to non-lethal furniture in the first few seconds.

Again, this is nothing entirely original in the context of the base game; one of the original’s greatest appeals was the feeling of overcoming seemingly impossible odds. In sizing up the situation, to make good with what figurative hand you were dealt and to come out the other side triumphant. All of that returns in glorious fashion with MIND CONTROL DELETE and is added to with the inclusion of new enemy types and the means with which players must approach these brief engagements. There are enemies with jagged spikes protruding from out their bodies, whom explode in a flurry of bullets upon death. Then there are enemies who can only be harmed on specifically-designated parts of their bodies — requiring an even more precise and resourceful use of one’s weapons and ammunition. But it’s specifically in the latter parts of the expansion’s “campaign” when completely invulnerable foes are introduced. Preceded by a notable visual cue, these enemies appear at random from anywhere in the level whereby they throw up deadly tricks to avoid. 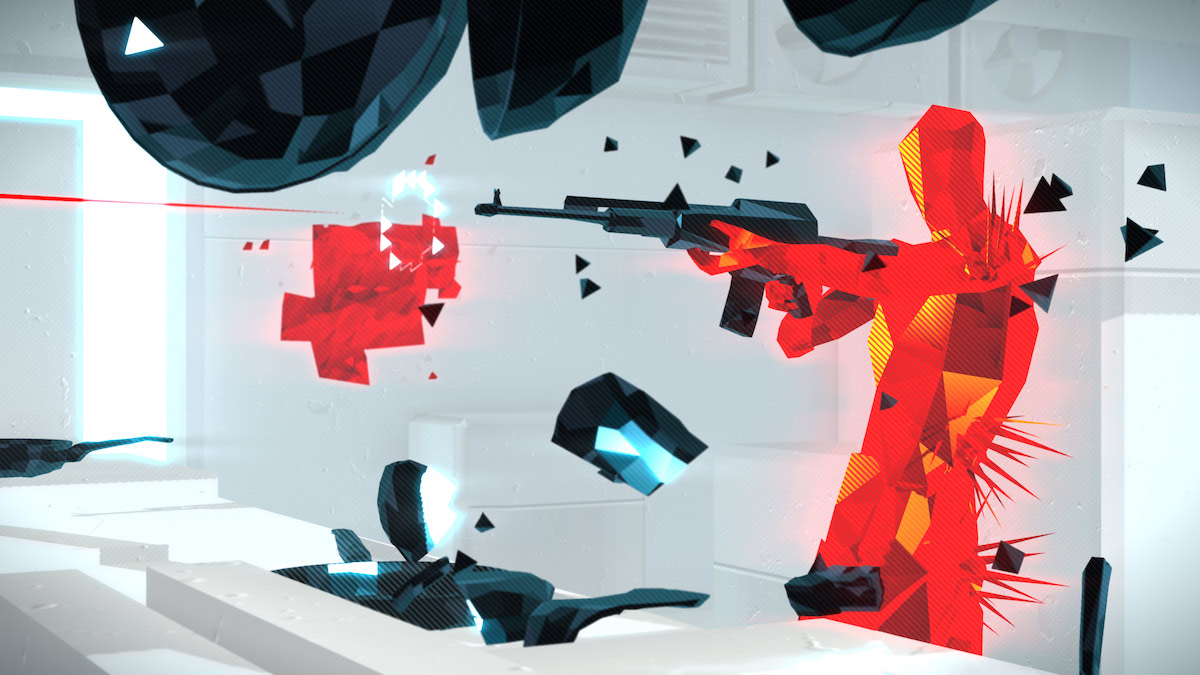 It’s here where SUPERHOT‘s gameplay loop genuinely feels like an evolution. From once a mere requirement of taking down all foes in the vicinity, MIND CONTROL DELETE now reinforces (and continuously reiterates) the need for strategy in one’s movement. To be tactful with one’s positioning and to be all too aware that, throughout, one’s luck can flip so easily at any given moment. When it’s the situations and emergent moments of desperation that are the random factor, MIND CONTROL DELETE‘s otherwise formulaic front-end manages to side-step any feeling of monotony. Despite the fact players will most likely have explored all environments and would-be combat spaces by about the half-way mark. The reliance on repeated settings is, again, another brief disappointment that can’t be ignored, but much like with the base game, MIND CONTROL DELETE manages to twist and alter the scenario enough that the rudimentary shape or design or levels doesn’t feel that much a bother.

The other welcome inclusion in MIND CONTROL DELETE are the plentiful, optional abilities and perks one can acquire mid-way through a sequence. At certain points in one’s progression you’re given the ability to equip one of two temporary power-ups of sorts to aid you on your way. Ranging from increased health (and even the ability to recover lost health) to increased ammo and even the ability to start all levels in a sequence with katana in hand, the poole of perks on random offer can be further added to with optional stages off the main path. Stages that either simply have you complete a basic tutorial or in fact have you taking on a similarly sequenced set of levels, so as to acquire that particular ability. Regardless of where and at what point you reach these spots of respite, the game is smart in that it provides two equally-viable options to invest in. An instant heal, for example, will almost always pop up when you’re riding your last heart on a given run, yet will never be seen if you remain at full stock. It’s a small inclusion and attention to detail, but further reinforces the notion that for all its reliance on random events, the game is still purposeful in its providing a viable array of tools and means of assistance. 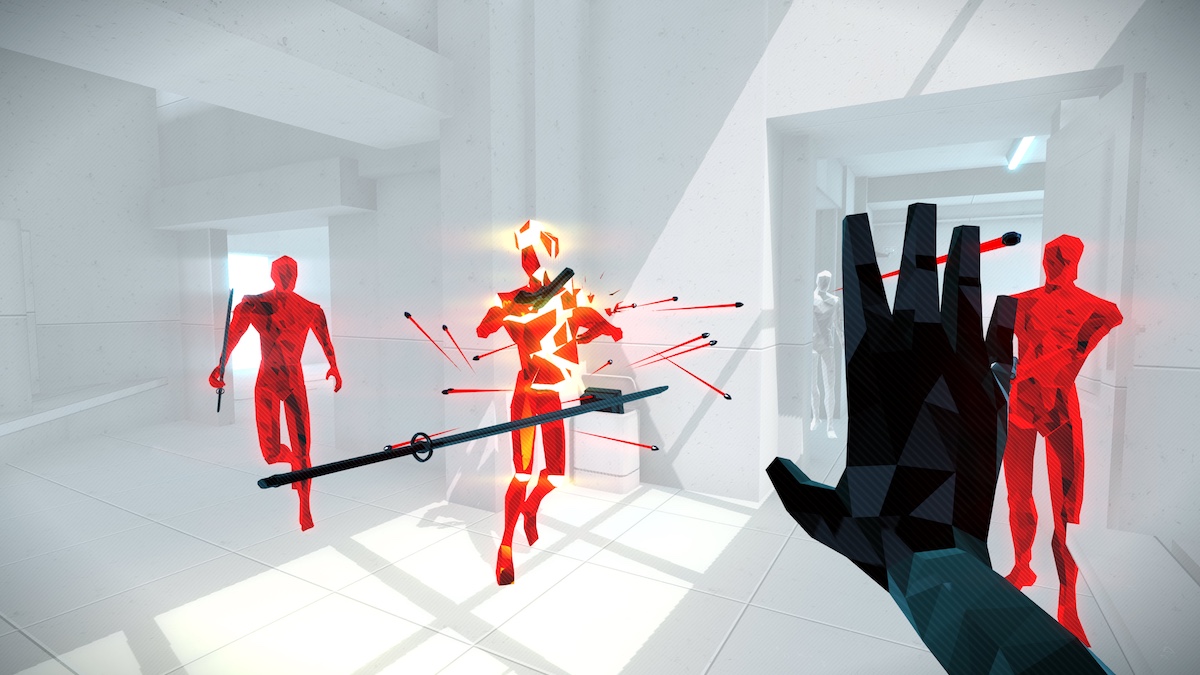 More than four years on, SUPERHOT remains as instantly recognizable and immensely appealing a gameplay concept as it ever was on day one. MIND CONTROL DELETE may feel more like a continuation of a good run, rather than a full expanding upon the foundation, but that doesn’t mean that what new features it does offer up fail in helping to bolster what still remains a fun and ingenious interpretation of first-person shooting and puzzle-solving fused together. While it’s easy to pick out the over-reliance on repeated environments, as much the disappointing lack of committing to the subversive elements of previous, there are just as many — if not more — new additions brought into the fold, that ultimately, rightfully, claim most of the attention. A familiar reflection of what the base game managed it may be, a slew of new threats, devious twists and further reinforcing of smart tactics to compensate for such unpredictability result in MIND CONTROL DELETE ending up a great addition to the SUPERHOT experience.