Way back in 2012, Ubisoft unveiled a next generation game that they hoped would revolutionize the genre. While it didn’t live up to expectations, its sequel helped usher in a more iterative open world experience that was all about the entertaining and almost comical ways hacking is put into use against the unseen corruption and oppression, among other travesties. That was four years ago and Ubisoft is far from done with the franchise as Watch Dogs: Legion looks to take everything the company has learned over the years and improve upon them. While we haven’t heard much about Legion since its reveal last year outside of some delays, we were able to explore the near-futuristic dystopian London for a sizable four hours. Our short time with the game has left an impression on us, more curiosity than anything else.

By far the largest feature Watch Dogs: Legion has to offer, one that will differentiate itself from competition, is the ability to recruit almost anyone in the world to DedSec. London’s outlook has never looked grimmer, with the oppressive PMC Albion running the show and gangs taking chunks out of sectors of the city. This has put the citizens on edge and want change, leaving you with the ability to bring on anyone who wants to make a difference. Heck, we even found someone who was seemingly dead or dying on the side of the road, who’s supposed to be in the hospital, you could recruit to your cause. You’ll literally take anyone you can get. While you can recruit almost anyone in the world, there are very specific individuals, identified by a green icon, that come with their own unique abilities and side quests. These short one to two mission endeavors include stealing an ambulance full of medical supplies that were held by gangs or hacking into a location to uncover information; nothing too fancy, at least from what we played, but at least they all had their own backstory. 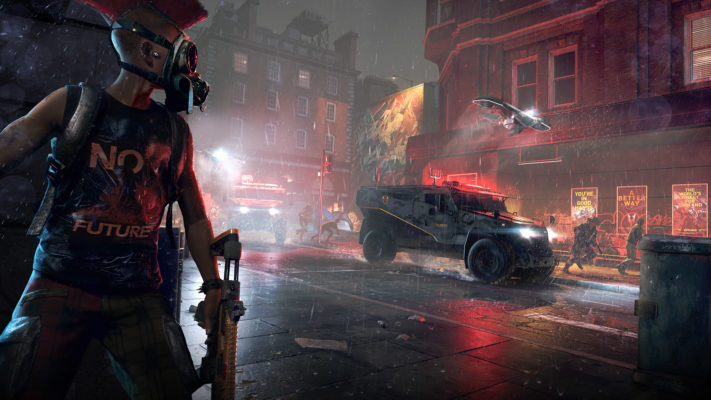 The only concern regarding this feature is primarily that, while it’s fascinating that you can play as any NPC in the world, most of them seem to follow a specific template. There are spy characters, hitmen, hackers, and so forth that come with their own gadgets and weaponry. Obviously this build was a small taste of what we can expect, but it stood out as something to keep any eye on. I also would love to know how many missions require specific individuals. We ran through a main story quest that required the player to recruit an individual to use their uniform to infiltrate a site. Doing so won’t completely allow you to bypass most security as it’s similar to something like Hitman where there are guards that, if you get too close or stand in their view for too long, will become suspicious. This plays into the stealth element of the game, as you can avoid enemies or take them down quietly or go guns blazing; it’s almost more beneficial to go down the former route as hacking sometimes requires you to be near someone or something. A lot of the puzzles can also be done through a spiderbot that anyone can equip and their takedowns almost feel too powerful.

The big question is, what happens when someone dies? Well, it doesn’t mean their end. If a character dies in a firefight, they will simply be arrested and put on a cooldown for thirty minutes. It isn’t as dramatic as we had hoped and it’s hard not to wish for a hardcore difficulty where death means permadeath. Regardless, if you have an officer recruited on your team, this cooldown can be cut by a significant amount. Speaking of which, each character has their own abilities tied to not only their character trait but their profession. So a spy for example will have gadgets and a spy car that can shoot rockets, whereas something like a beekeeper can summon a swarm of bees to damage and distract your enemies. Even having a paramedic or a construction worker can come in handy depending where a mission will take you, with the latter having the ability to call upon a drone carrier that helps bypass quite of a bit. There’s a lot of strategic thinking required in a mission as you’ll want to take the most appropriate individual based on the situation. 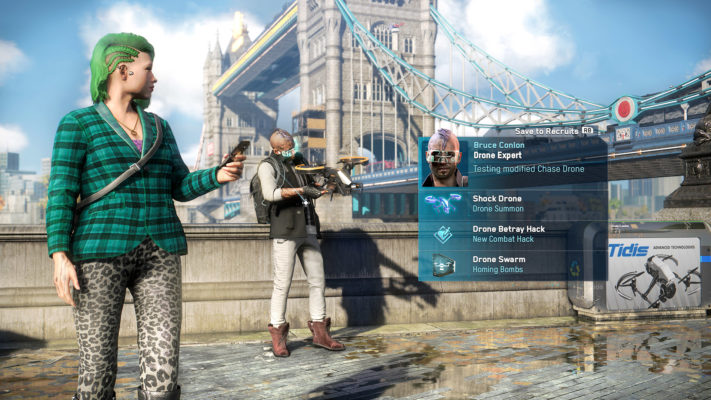 Like any modern or futuristic open world action title, driving is a major component for transportation and Watch Dogs: Legion is no different. You’ll be stealing cars, although more times than not I found myself hacking into an auto-driving vehicle and taking it without having to harass some poor civilian. Driving from point A to point B still feels a bit stiff, especially with the camera constantly snapping back into place after slightest adjustments. The navigation system is visually pleasing, although, unless we completely missed it, it requires you to open up the map and manually select a location to assign a waypoint for, instead of automatically guiding you whilst in a mission. While still in development, the navigation is also a bit wonky, generally bringing us close to the desired location, but has trouble actually guiding the player when it comes to getting off the road or going into a building like a parking complex. At the very least there are teleportation hubs all across the world thanks to the London Tube so you’ll be getting around quickly.

Watch Dogs: Legion has us intrigued and hopeful. The ability to recruit and swap between characters based on the scenario is a compelling feature that we want to play more around with, although in our brief time with it, we got the impression that a lot of the NPCs follow a specific template. Regardless, it adds a level of variety you don’t normally see from open world action games. Exploring through a virtual, near-futuristic London was a magical experience in its own right, as Ubisoft has recreated sections of the city with extreme precision, be it the Buckingham Palace or the London Eye. There are components that we hope are better expanded upon, but Watch Dogs: Legions could very well be the next step we had hoped for.