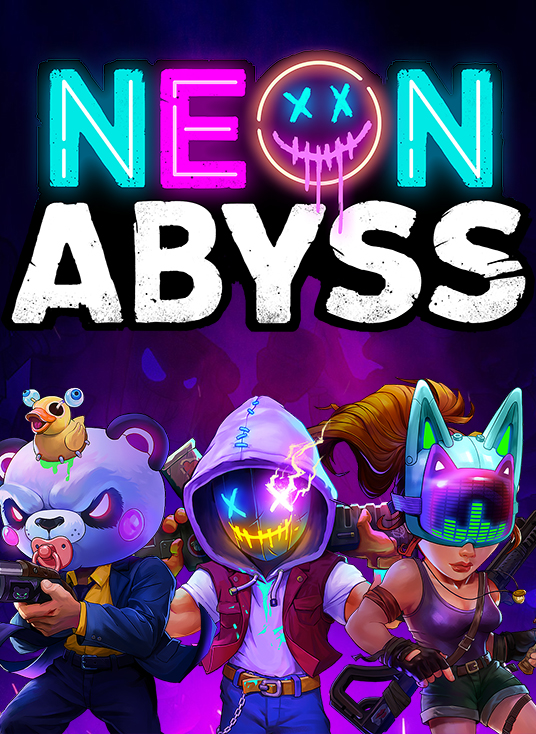 Just because change is inevitable doesn’t mean the past will let itself get steamrolled.  The old gods are getting supplanted by new ones more in tune with the world as it currently exists and they’re not happy about it, but what can they do?  Other than start a Grim Squad task force to take them down hard, that is.  The world may change faster day by day with new influences pushing back the old, but history is a powerful force.  It’s going to take more than the latest fads like gods of fast food or mobile video to supplant the primal forces of the ancient pantheons.

As an agent of the Grim Squad, you’ve been granted power by Hades to venture into the Abyss and eliminate the the new gods and their minions using the sacred abilities invested in heavy firepower.  Neon Abyss is a roguelike run & gun twin-stick shooter, tearing through the underworld one side-view room at a time.  Most rooms hold a handful of monsters and an item or two, and surviving unlocks the door to the next area while letting you collect the goodies in peace.  Each level is a collection of rooms linked together in a random fashion, and whether you explore every single one or attempt to head straight to the boss is your choice. You’ll probably be significantly more powerful if you make sure to hit every room in the level, though.

There are a good number of items to chase after, ranging from low-tier yet incredibly useful drops like health, shields, keys and bombs to rarer items that have a permanent effect on the character for the duration of the run.  Most of the common low-tier items are standard but Neon Abyss supplements them with some fun ideas of its own.  Purple crystals, for example, power a good number of possible extras ranging from locked doors and chests to powering a weapon’s unique ability.  The brightly-colored eggs, on the other hand, trail along behind you and eventually pop open into a little pet, which can be either helpful or significantly less so. 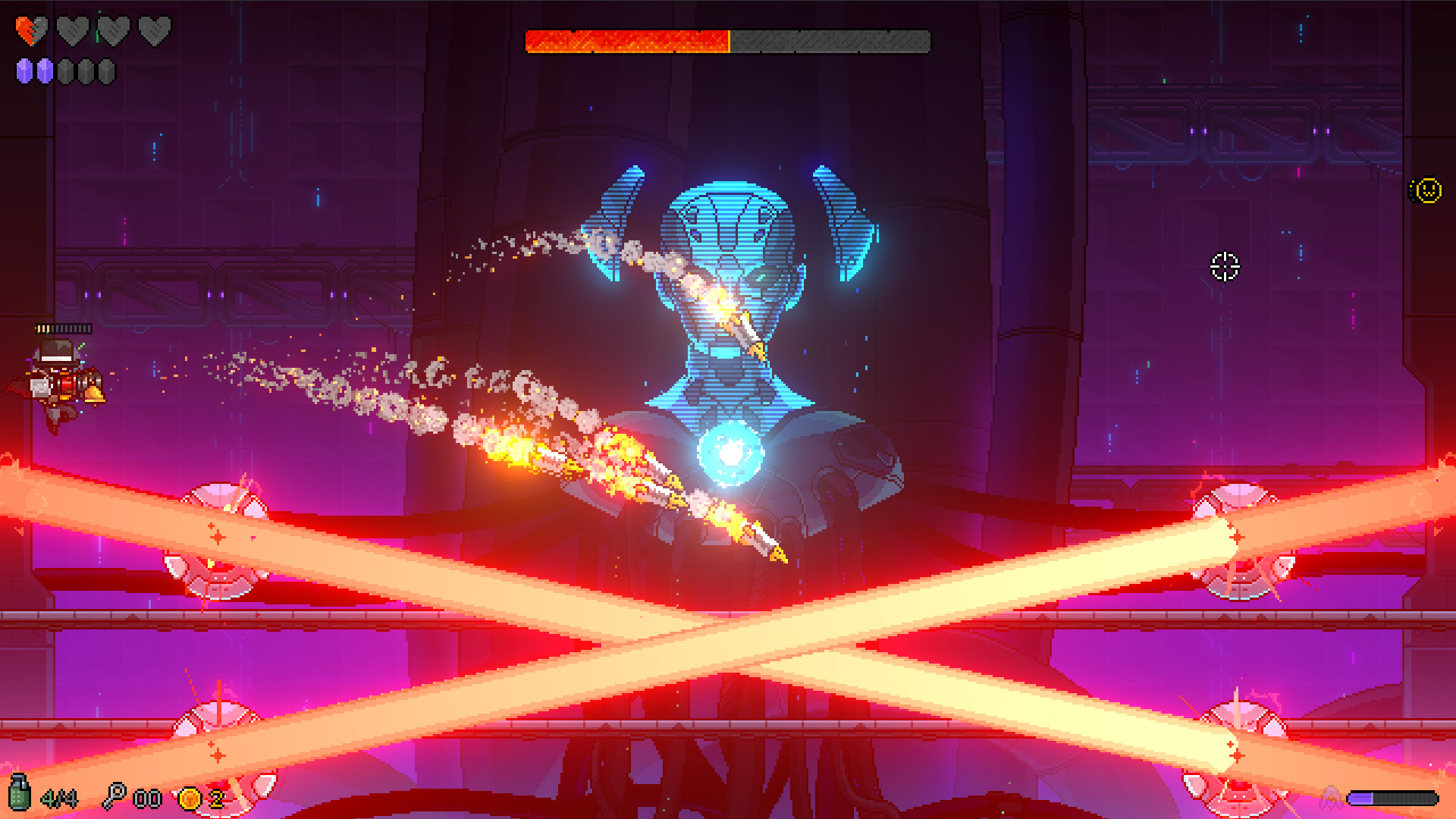 When an egg hatches there’s a chance nothing is in there, but more often than not one of a number of different types of little familiars is born, each with its own abilities.  Usually they float along behind, tossing bombs or bullets, but some steal money or convert perfectly useful healing heart items into moldy hearts with a fifty-fifty chance to heal or damage you.  Once you’ve hatched a pet you’re stuck with it until either it dies or you do, but they do level up and get more useful as you clear more rooms.  It doesn’t take too long before there’s a cheerful string of eggs and pets trailing along behind, although as the difficulty slowly ramps up the retinue gets whittled down to size.

Neon Abyss doesn’t start off particularly hard but as you slowly stack the powerups it ramps up to meet you head-on.  The starting gun is weak, of course, but every floor of the dungeon has a treasure room with a stat-changing perk, killing the floor’s boss earns another, and with a bit of luck there might be one kicking around a chest.  As the gun gets more powerful its bullets grow in size, while fire rate, number of bullets and distance traveled can all show up as well.  Even with no luck finding a new gun the initial one can end up powerful with the right endlessly-stacking pickups, although if it gets too overwhelming you can do as much damage to yourself as the enemies.  Exploding bullets are awfully nice and mean you don’t need to worry about finding grenades to blow open stone walls and doors, but nothing says “Whoops” quite like blowing up an enemy an inch in front of your face.  Not all perks are gun-oriented, of course, with several different types adding hearts, heart containers, an extra jump, or even wings to fly around the room.  Almost every powerup feels significant for the run, with a noticeable effect on the gameplay. 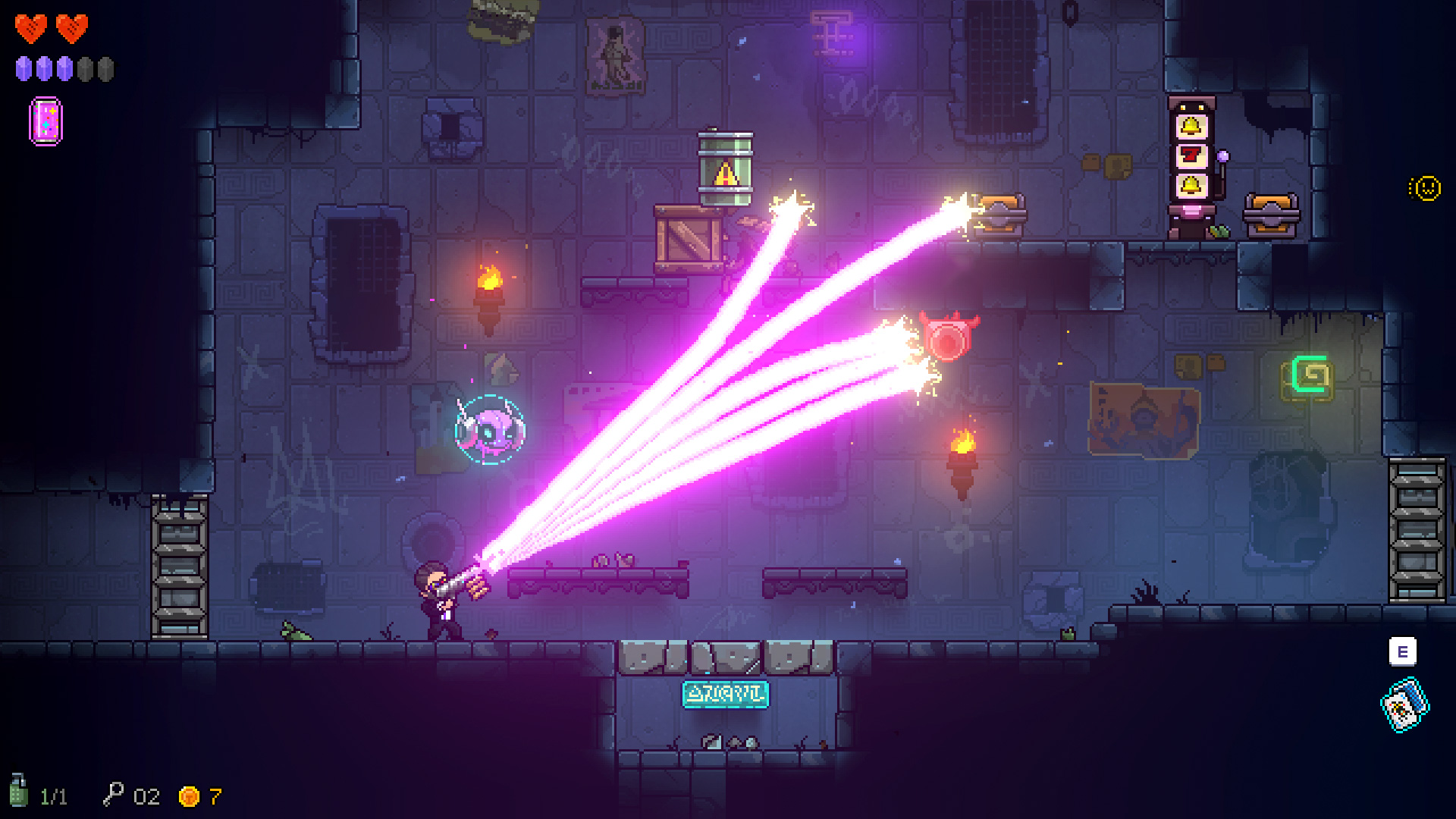 It’s all very nice for the first gun, of course, but eventually you’ll either find something better or the coin-drops will pile up and you’ll be able to buy one.  There’s a huge variety of firepower available, and thankfully you can swap back to the old gun stays where you dropped it if the new one is too weird.  A giant plasma-flail is a lovely thing, while a charge-up laser takes finesse with every powerful shot.  A multi-rocket barrage is also a lot of fun, but maybe not particularly practical in a smaller room.  The right gun with the right powerups can dismantle a boss in seconds, but generally the luck of the draw means a more extended fight even when you’re trying to be focused.  It’s hard to resist experimenting when a new powerup shows up, after all, which with the sheer volume of items waiting for discovery can be often.

While Neon Abyss is mostly a platform-shooter, not every room is another monster-fest.  Some rooms in the dungeons have teleporters, for example, and they’re unlikely to have any monsters at all.  There are also shops and treasure rooms for both major and minor pickups, plus mini-games to unlock.  Each boss drops a crystal that, after the run is over, gets added to the total and can be traded with the bartender at the nightclub each new run starts in.  There’s a lot to purchase, ranging from new powerups to dungeon features like marking blocks with drops inside, and even minigames or whole new playable characters.  Running and gunning is all nice, but Neon Abyss is careful to break up the shooting with a good number of diversions along the way. 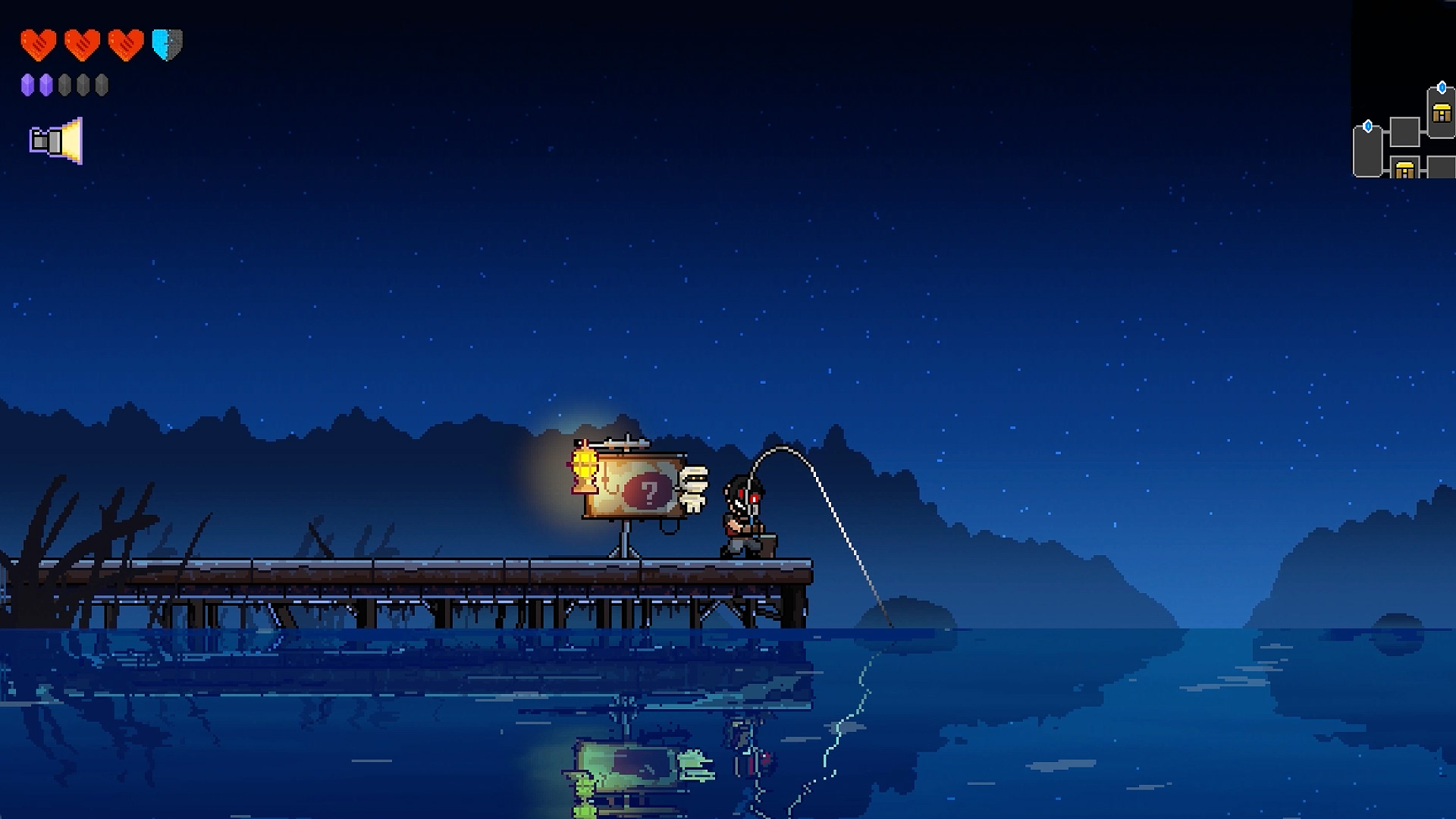 Neon Abyss is a highly playable action-roguelike with a huge number of perks and weapons to take on the ever-growing horde of monsters that show up in each room.  The powerup progression in a run is almost always satisfying, assuming it doesn’t take too long for the random drops to start piling up in a helpful way, and while sometimes the chaos can become unreadable it’s usually due to becoming trigger-happy on entering a new room.  With great power comes great responsibility, and that can mean carefully managing a gun that might shoot multiple large homing projectiles in a room with four or more different enemy types, each with its own individual attack and bullet pattern.  In theory at least there’s no need to take a hit even against the barrage of the meanest deity-boss, but it’s far more likely a run will end prematurely as small errors add up, but the abyss is always waiting.  Whether it’s the new gods of a modern age or the old standbys, it doesn’t matter too much. There’s a whole giant dungeon’s worth of shooting down in the underworld and the conceptual personifications of human ideas can sort themselves out.